Bill Hughes is an experienced executive, consultant, and industry analyst leading Guidehouse Insights’ Building Automation & Control and contributing to the IoT and Connectivity solution. He...

Generating electric power from wind and the sun is popular; it is also often necessary to curtail this power during peak times. Perfectly good power is prevented from connecting to the grid and discarded when there is too much power and not enough load. The State of California, an undisputed leader in its pursuit of aggressive, renewable power-related goals, has had to turn away almost $500 million in potential profit from renewable power since 2016.

Curtailment-Related Revenue Loss Has Only Grown

This situation worsened in the first 5 months of 2020. According to the California Independent System Operator, almost 1% of the total power load created from renewable power sources is dissipated as heat into the environment. This is worth more than $1 million every day in lost profit and revenue. The chart below shows how this amount has grown as the result of more solar power farms coming online that have output peaks in the middle of the day.

Since no one controls the wind, sun, or clouds, it is possible there is a situation where there too much power is sent to the grid. If too much power is on the grid even for a moment, circuit breakers would trip and force a power outage. Without curtailment, overvoltage would burn out motors and transformers throughout the region. Too much power on the grid must be addressed one way or another. 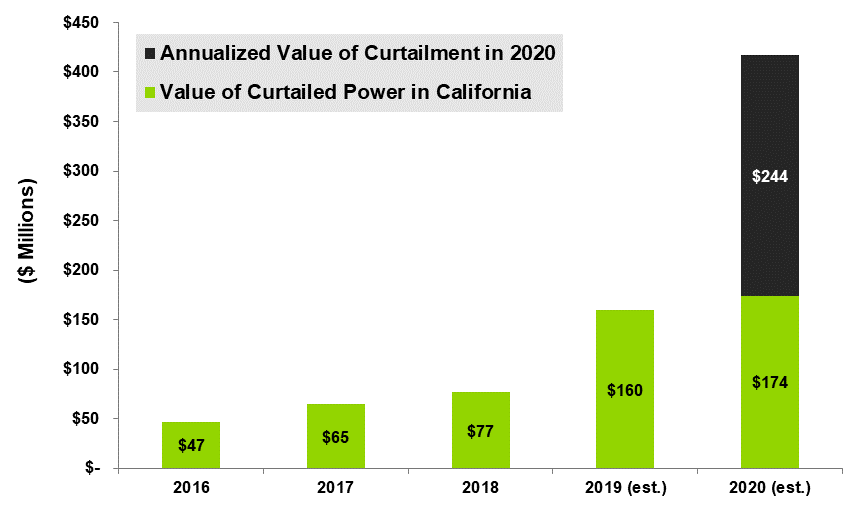 Note: The 2019 and 2020 estimates relate to calculating the average price in California. Capacity (MWh) details from California Independent System Operator were converted to US dollars.

The traditional approach to load planning is to use top-down, historical estimates that assume the usage from previous years and months will be like tomorrow’s demand. Modern data analytics make it is possible to build a bottoms-up forecast that considers the behavior of individual customers. More accurate estimates based on data analytics makes it possible to reduce power generated by other sources, like fossil fuels, rather than curtail power from renewables.

When these projects are installed, their full use will require coordination. Without proper coordination based on advanced analytics, the outcome could result in no net effect, or could even exacerbate the situation. We would see brownouts where voltages drop too low followed by swings to overvoltage, which then cause the grid to shut down. Analytics prevents this from occurring by ensuring that the charging and discharging of nearby batteries corresponds with the demand. It is pointless to have one battery discharge and the battery next door recharge with no net power flowing to the grid to generate productive work.

For example, all new residential buildings constructed in California must include solar panels. This will increase the amount of renewable energy used, but only if the power generated by these panels is not immediately offset by curtailment. This is likely to occur since peak power generation occurs almost simultaneously for solar panels on rooves by the coastline and at the solar farm inland.

Moving Forward in a Coordinated Manner

Advanced analytics can help manage the curtailment process; this tool will help regions successfully achieve the goal of increasing the share of renewable energy. Analytics and power storage are not easy to install and manage. Sophisticated tools are required to ensure that individual components of the power solution do not just shift power from one spot to another with no net benefit to anyone. Instead, tools must enable an increased use of renewable power. Such systems are easier to justify when the costs of curtailment are measured in the hundreds of millions of dollars annually.

Such an important topic in the area of making renewables even more attractive, thanks for the great coverage of it!

For example, all new residential buildings constructed in California must include solar panels. This will increase the amount of renewable energy used, but only if the power generated by these panels is not immediately offset by curtailment. This is likely to occur since peak power generation occurs almost simultaneously for solar panels on rooves by the coastline and at the solar farm inland.

Could incentives for solar+storage in this type of situation help? Of course that only adds to the expenses, which is one of the big arguments against such measures, but seems like it'd be helpful to at least make that option more available