Posted to GridIntellect, LLC – A Veteran-owned Company in the Clean Power Professionals Group

This article is Part 1 of a three-part series on the role of Public Power in decarbonizing and electrifying our society and economy. In this first article we establish the clear imperative to decarbonize and what that means for Public Power. In Part 2, we review the Crisis of Slow Public Power Decarbonization. In Part 3, we connect the dots between decarbonization and distributed energy resources (DER), showing a second imperative for public power: integrating DER into utility grid modernization. As we continue this series, we’ll explore a wide variety of impacts, constraints, risks, costs and benefits, including supply chain issues, the broad impact of decarbonization on our society and economy, and the upsides of an Electrify Everything Economy.

“Human activity is changing the climate in unprecedented and sometimes irreversible ways.”  The United Nations Intergovernmental Panel on Climate Change (IPCC) released its latest report in August 2021 calling the current state of the global climate a “Code Red for humanity.”  UN Secretary General Antonio Guterres stated, "If we combine forces now, we can avert climate catastrophe. But, as today's report makes clear, there is no time for delay and no room for excuses.”
Now is the time to be aggressive, ambitious, and unambiguous about electrification and decarbonization.

Some of the climate changes that have occurred or are occurring have now become too late to avoid.  Even with immediate action, the Greenland ice sheet will continue to melt, leading to rising sea levels, increasing acidity levels, and a possible shift in the Gulf Stream in the years ahead, with massive weather impacts.  Heat waves, droughts, and the number and severity of tropical storms will increase.  This means intense heat and wildfires in the West (and now other parts of the US), with severe storms and temperature swings throughout the country.

At this point, climate change has become pretty obvious to everyone.  Yale’s 2018 climate change survey showed that 70% of Americans believe climate change is happening, and 58% believe it is caused mostly by humans.  Those numbers have almost certainly grown since then.

The facts have become strikingly obvious, and these data do not lie. The last six years are the hottest in recorded human history.  Extreme weather events happen more often and when they do, they’re more severe. The polar ice sheets are now melting at rates not seen since the Ice Age thousands of years ago.  Fires, droughts, and species extinctions are now happening at rates never seen by humans. And these extreme weather impacts are occurring at our current level of between 1.2 and 1.3 degrees of warming. (Source: Climate Action Tracker: Climate Summit Momentum – Paris Commitments Improve Warming Estimate to 2.4 Degrees). Alarmingly, even with herculean efforts to decarbonize and electrify, things will get worse before they start to get better.

The following table provides data from NASA on some of the key climate change metrics:

Scientists and most of the world’s population recognize that climate change is real, that it’s caused by human activity, and that it’s due to Greenhouse Gas (GHG) emissions – primarily carbon dioxide (CO2) and methane (CH4), which are both byproducts of burning fossil fuels. The inescapable conclusion is that we must stop burning fossil fuels - we must decarbonize – and that means we must Electrify Everything.

The rate at which the climate is changing even caught the IPCC by surprise.  This is all happening much faster than was predicted.  Climate change is non-linear.  As a metaphor, consider a spinning top.  It spins in equilibrium with minor perturbances until it slows down. At that point, the spinning becomes enormously unstable and unpredictable, and it wobbles out of control.  In fact, many scientists believe we are exiting the very stable geologic Holocene Epoch and have entered a new, man-made Anthropocene Epoch.  In the blink of an eye, our planet has moved from Global Warming to an outright Climate Emergency. With our global house on fire, we must respond accordingly to what has become an existential crisis.  Reducing the impact of the Climate Emergency on our one-and-only home planet and preserving a livable place for all inhabitants requires immediate, radical action.

Some key takeaways from the IPCC report are:

All in all, the IPCC’s 2021 Climate Assessment Report was bad news for the Earth, humans, and most of Earth’s inhabitants.  Although not all hope has been lost, it’s clear that we’re quickly running out of time – and the most impactful and best path to address the biggest challenge in human history: rapid decarbonization of energy generation and use.

This regional fact sheet for North and Central America is provided by the IPCC as part of its report: 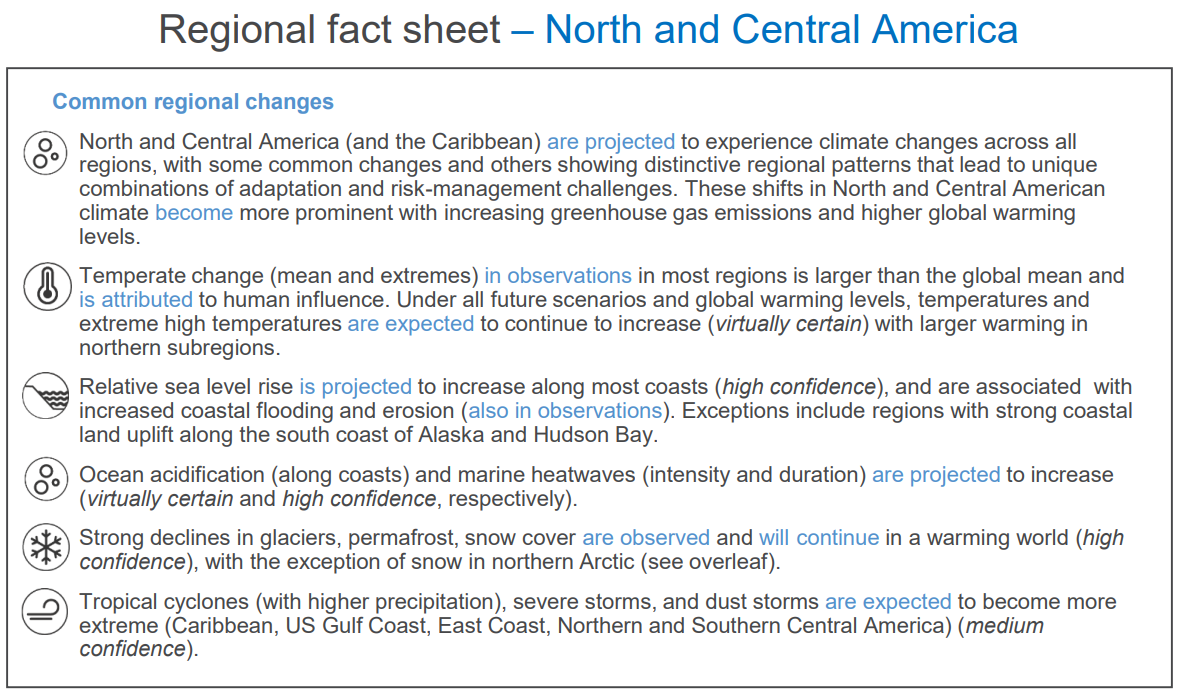 Since the Yale survey, belief and concern about climate change in the US has risen to political centerpieces that match the “will of the people”.  We the People want action now, and the Biden administration has made climate change one of the key pillars of its policy. Biden’s legacy as an American President is tightly coupled with the outcome of those policies, but he needs supporting action throughout American society and economy to take the politically risky steps that are necessary. A large sum of stimulus money in the Infrastructure Bill to reduce carbon emissions is targeted at the utility industry ($73B has been earmarked for transmission and “advanced technology” projects out of the recent $1T infrastructure bill).  Another $198B is earmarked in the upcoming 'human infrastructure bill" for the Energy and Natural Resources Committee, including funding instructions largely related to clean energy development. 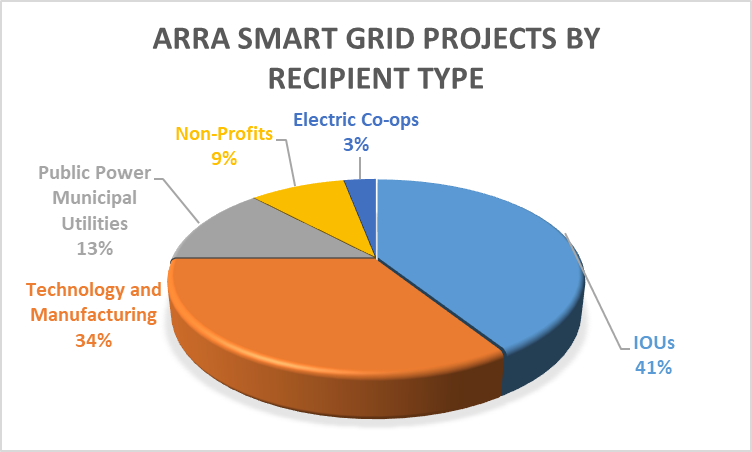 Where this money will be spent is equally as important as how much money is made available. In a previous stimulus bill (i.e., ARRA in 2008), the overwhelming majority of federal investment dollars was targeted towards Investor-Owned Utilities and Technology and Manufacturing.  In the remaining two articles in this series, we’ll make the case for Public Power Municipal Utilities, showing why unregulated, local, customer-focused small utilities are the best target sector to use federal funding to achieve real decarbonization innovation and realize US climate goals.

John Cooper, Founder and CEO of NXT NRG, is an energy entrepreneur and recognized innovator in the electricity sector. Based in Austin, TX, NXT NRG provides services that integrate decarbonization with resilience, energy self-sufficiency, transportation & building electrification, and data/digitalization. John is a widely published author and public speaker (The Advanced Smart Grid: Edge Power Driving Sustainability, 2011 1st Ed, 2014 2nd Ed). John has an MBA and a BA in Government with honors from the University of Texas at Austin.

Eamonn McCormick is the CTO at Utilicast, a leading energy industry consultancy. Eamonn is a passionate believer in the bright future of the energy industry and the importance of collaboration as the foundation for solving for our current industry challenges. He is a results driven technology leader with a track record of success. He has implemented strategic technology change at several large energy companies over the last twenty years in the areas of wholesale markets, transmission and energy distribution.

Since the Yale survey, belief and concern about climate change in the US has risen to political centerpieces that match the “will of the people”.

Reading the IPCC report (well, OK, the executive summaries of the report!), I couldn't help but wonder if this would make a difference to anyone who was already dug into their position that climate change isn't a threat or isn't human-made, but you're right that it's less about convincing those people as the will of the people is already there. The information in the report provides an outline to leaders about where and how to focus efforts and gives them even more evidence of the existential mandate to point to as they make big moves that are needed.

Well said, my friend. The biggest takeaway from the IPCC report is that we are in a crisis and they even called it a Code Red condition.  This is the IPCC screaming at the top of their lungs to take immediate action at a global scale.

The US is about to invest a bunch of money with government and private equity investments.  We need to be really SMART about how that money is spent and we need to move FAST!  The rest of the article series will talk about Public Power companies, some of the decarbonization barriers that they have to deal with, some solutions to those barriers, and why Public Power utilities are the perfect companies to do real innovation and try a variety of different technologies and decarbonization use cases to scale up for the big utilities.

Good first installment. Thanks. I look forward to your remarks on how we are going to get where we need to go from here. I do hope that it addresses how the developed world will bring along the developing world in the decarbonization journey. Without that, all the investment will be for naught as world carbon emissions will stay flat, at best, and not curve downward until well past 2050, when irrevocable damage will have been done.

Mark, great point!  I think everyone needs to do their part, and I couldn't agree more that the US needs to set the example and lay down a sustainable framework for the rest of the world to follow.