Dr. John Bistline is a Principal Project Manager in the Energy Systems and Climate Analysis Group at the Electric Power Research Institute (EPRI). His research analyzes the economic and...

In April 2021, the United States updated its Paris Agreement pledge to reduce economy-wide greenhouse gas (GHG) emissions 50-52 percent below 2005 levels by 2030. While the near-term goal is clear, there are still many questions about what actions to take, and how these various approaches may impact energy supply and demand, sector emissions pathways, and end-use consumers.

In a new collaborative article published in Science, I join researchers from the Natural Resources Defense Council, Bezos Earth Fund, University of Maryland Lawrence Berkeley National Laboratory, Pacific Northwest Laboratory, and the MIT Joint Program on the Science and Policy of Global Change to compare six different models (image below) to understand actions to achieve the 2030 GHG emissions reduction target. The research highlights common findings on “low-regret” strategies, which are relatively low-cost mitigation strategies under a range of potential future scenarios. These efforts include actions like significantly reducing coal generation, expanding wind and solar capacity, and supporting widespread adoption of electric transportation. 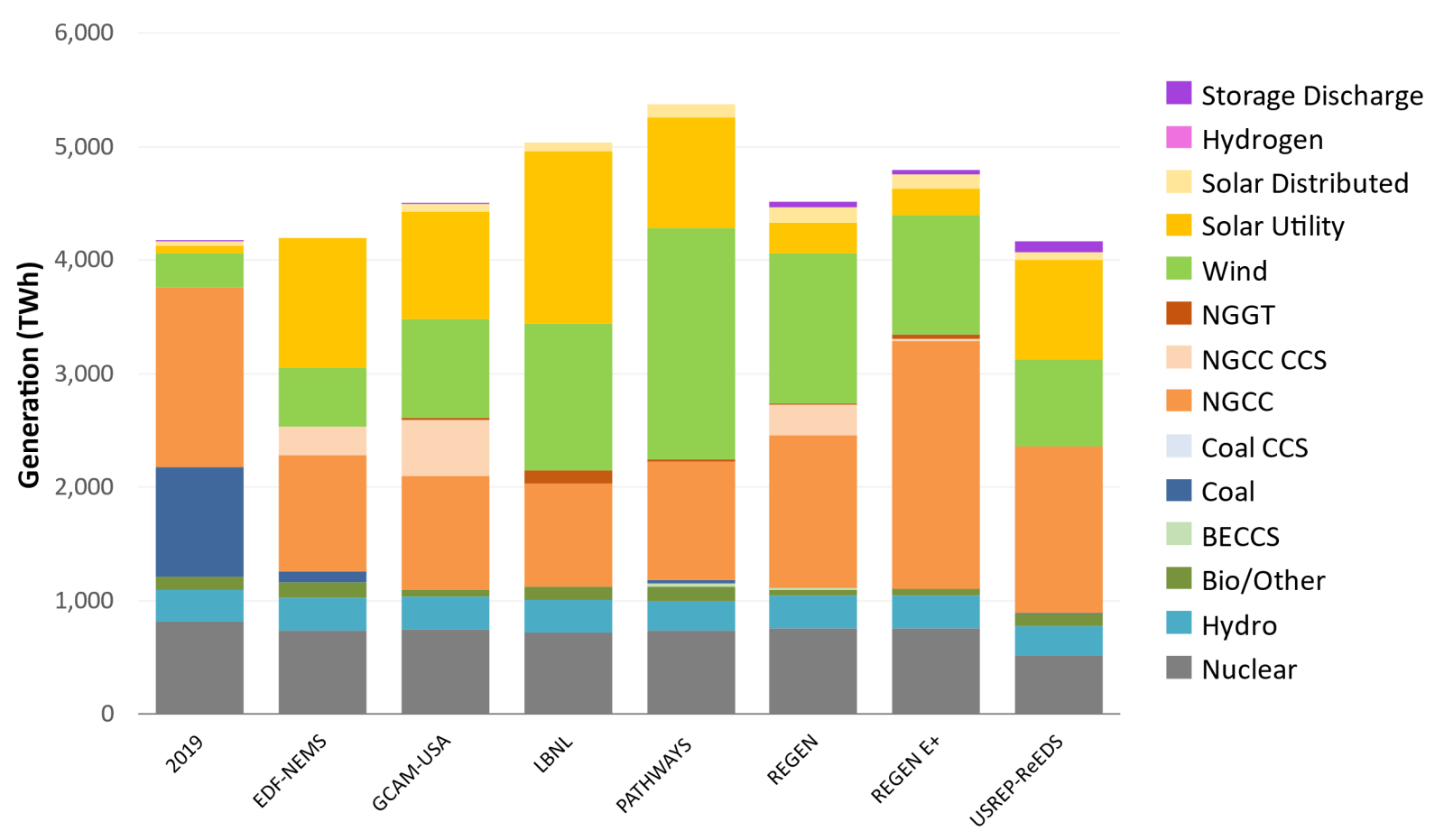 There are several robust findings from the research:

In addition to the robust insights across the models, there are also several key differences in energy sector mitigation strategies. These differences include the level of electrification, share of electricity from renewables, and ratio of wind to solar builds. The comparison also shows variations in the extent of new natural gas capacity built to replace retiring coal capacity, balance renewables, and meet growing demand from electrification. Models also differ in their assessments of the role of emerging technologies, such as carbon capture and storage, and supporting infrastructure, such as transmission expansion.

You can learn more about our study by reading the article “Actions for Reducing U.S. Emissions at Least 50 Percent by 2030,” published in Science. We have also prepared a two-page research brief to highlight key findings. Plus, learn more about EPRI’s research to examine pathways and actions for reaching the U.S. 2030 target.

Your analysis neglects to mention how much this will cost. Looks to me like the consumer is on the short-end-of-the-stick with investment firms doing quite well. All these massive increases in the cost of energy have zero benefit to the average citizen. Indeed, they just get poorer.

I am struck by two interrelated elements of your post. First, the recognition of the need to add new NGCC capacity to replace coal generation, rather than more wind and solar. Second, the absence of discussion of electricity storage.

In the face of the Administration's goal to eliminate CO2 emissions from the electric sector by 2035, it seems unlikely that new NGCC capacity would be built with the knowledge that it would be shuttered by 2035, unless equipped with CCS.

The Administrations goals demonstrate their stunningly abysmal knowledge of economics and energy. Mindless political gibberish is their approach to problems.