SSE Renewables has warned that Ireland’s ability to achieve its offshore wind target for 2030 is being “undermined” by delays.

The company – which bought Airtricity who co-developed the 25-megawatt (MW) off the shores of , with GE Energy – has plans to invest up to €2bn developing a second phase of the wind farm. The Arklow Bank Wind Park Phase 2 could generate enough energy to power almost 450,000 homes annually.

Last Thursday, during a Seanad question and answer session, Fianna Fáil senator highlighted that SSE had submitted an environmental impact assessment report to the in March. The report related to the project, with SSE aiming to extend longstop dates associated with the lease.

He added it hadn’t heard back from the department, preventing the project from moving forward to the next step.

SSE confirmed it had been waiting on a response from the department, adding it had made it aware of SSE’s “frustrations at the delay”. The firm pointed out that the Government’s 2019 Climate Action Plan included an interim offshore wind target of one gigawatt (GW) by 2025, while the Programme for Government commits to developing at least 5GW of offshore wind energy by 2030.

SSE said the delay was impacting on its ability to deliver the second phase of by its target of 2025.

“We still believe we can deliver by 2025, but it will require decisive action by Government before the end of this year,” said SSE.

“We would feel that if doesn’t progress, via the Foreshore Act to deliver by 2025, our analysis would show projects progressing under the MAP [Maritime Area Planning Bill] at this stage really won’t start to deliver until 2028, which will be backloading the 5GW to the latter part of the decade.

“We would be concerned that Ireland’s ability to achieve 5GW by 2030 is being undermined by the delays. We see 5GW by 2030 as challenging to deliver.”

SSE said it believed delays could be overcome. It felt the Government had prioritised the MAP Bill since it returned after the summer recess, and highlighted progress in the Renewable Electricity Support Scheme (RESS) for offshore.

“Progress is being made, but it’s the pace of progress that is really concerning,” SSE said.

and the said the MAP Bill would introduce a new marine planning system that will incorporate consenting for the occupation of the maritime area (Maritime Area Consents, or MACs) by a new agency, the (MARA).

They said the Bill included provisions to enable some projects, such as , to proceed through the new consenting regime when the Act comes into force ahead of the establishment of MARA.

The departments said SSE had continued to indicate it would not make an early MAC application and insists on progressing under the old foreshore legislation. They said changes in SSE’s application from the existing lease were “unprecedented” and it was necessary to review the application “carefully”. It would be in a position to provide an update to SSE “shortly”. 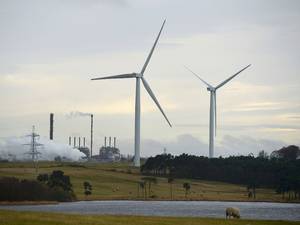 The U.K. went all in on wind power. Here’s what happens when it stops blowing
"The exponential growth of offshore wind farms in the North Sea has been a testament to the combined efforts of European countries’ investing time, effort, and money in the decarbonization of their electricity grids.

But just as Europe needs energy the most, the wind in the North Sea has stopped blowing, forcing regional energy markets to scramble for gas reserves to heat homes and power businesses.

This has had expensive consequences.

As the European energy market grows increasingly reliant on a renewable energy source that is cheap to harness and carbon-emission free—but is clearly unreliable when the wind isn’t blowing—surging electricity bills are an unintended consequence of the energy transition."