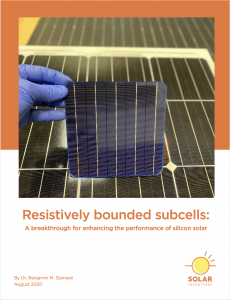 Any manufacturer anywhere can license the technology, with an excellent cost-benefit ratio."

ATLANTA, GEORGIA, UNITED STATES, August 5, 2020 /EINPresswire.com/ -- Solar Inventions has released a white paper with the first scientific details on its patent-pending new architecture for solar cells, which won the first Made in America Solar Prize last year from the U.S. Department of Energy and is now being offered to manufacturers.

Solar Inventions is offering manufacturers guaranteed ROI, starting with the money the technology will save them on silver, whose price is up 40% from a year ago.

The white paper, Introducing resistively bounded subcells: The lowest-cost method of increasing PV efficiency while improving safety and energy production, is now available for download from the company’s website at www.solarinventions.com/whitepaper.

The company’s founders and inventors have rapidly scaled up since demonstrating in late 2017 that their improved cell architecture can enhance performance and reliability. They won the DOE prize, worth $800,000, just 10 months ago. The prize money has been used to manufacture several rounds of pilot products, and obtain independent tests en route to commercializing their invention.

Solar Inventions’ patent-pending discovery puts the solar cells into “lanes” by electrically dividing each cell into subcells, allowing current to flow more directly. The new PV cell architecture increases the electricity produced by slightly increasing voltage and fill factor, and saves enough silver in manufacturing to more than cover licensing fees. Silver prices have spiked above $25 an ounce for the first time since 2013, up over 40% from a year ago.

“For a mid-sized vertically integrated solar manufacturer, we can save on the order of a million dollars a year before licensing fees,” said Gregg Freishtat, Chief Commercial Officer. “We’re offering the solar industry’s first 100% risk-free guarantee on this technology: We guarantee it will more than pay for itself, so there is no upfront cost or risk.”

“Any manufacturer anywhere can license the technology, with an excellent cost-benefit ratio,” said Ben Damiani, Solar Inventions’ co-founder and Chief Scientist. “It works with PERC, n-type, BSF, mono- or multi-crystalline, bi-facial, and half-cells, and it requires no changes to module manufacturing (full or half-cell). The new cell architecture requires no capital expenditures for existing production lines. The benefits are similar to half-cells, also a major solar industry trend, but without requiring cells to be physically broken and rewired.”

Damiani added, “As the industry trends towards large wafer sizes, our C3 technology actually has an even bigger impact. The added flexibility of the subcell architecture allows for new ways to limit the negative impact of power loss due to higher electrical current, which is directly related to the size of the wafer inside a solar module.”

“If even half the US industry adopted this architecture, hundreds of millions of dollars a year worth of added solar power would result,” said Solar Inventions CEO Bill Nussey.

The first prototype six-cell panel was created and tested in November 2017, and Solar Inventions was launched in January 2018.

By March 2019 it had won Round 1 of the American Made Solar Prize (worth $50,000), from the U.S. Department of Energy, and that month produced the first commercial C3 cells at Hanwha QCells, demonstrating it could improve cell-to-module loss reduction.

Solar Inventions went on to win Round 2 of the American Made Solar Prize ($100,000 cash and $75,000 in vouchers) in June 2019, and manufactured the first C3 “Smart Wire” module, consisting of eight 60-cell panels, with SolarTec Universal in USA that September.

“This signals the reawakening of the wind industry”

Tug-of-war between Eskom and municipalities over power supply

Canary Islands to make a splash with 250MW floating wind cluster; The new projects are forecast to produce enough energy to supply power for more than 280,000 homes

Gary commented on ...
Idaho Falls has till Oct. 31 to decide on nuke project

Interesting article, most of the time we don't see full capital costs for these projects until much later.  The individual number for the City of...

Mark commented on ...
What's next for Duane Arnold nuclear plant?