Dominion makes its case to SCC for $9.65 billion from customers to build wind farm

Acknowledging the risk of cost overruns but saying it doesn't anticipate any, made its case Tuesday to state regulators for approval of from its customers to build the country's largest offshore wind farm.

Dominion representatives touted the project's job creation and reduction in carbon emissions. They promised in a hearing before the to promptly notify the commission if costs are expected to exceed current estimates.

The attorney general's office, the advocacy group Clean Virginia and others told commissioners they're concerned about the potential for even higher costs on such a large construction project and in an economy with supply chain disruption and inflation.

No party in the case, in which the SCC is considering approval of the 176-turbine project and its costs, asked the commission to reject the request. A 2020 state law essentially directs the commission to approve the project if Dominion meets certain parameters, which the company said it had.

Dominion's capital cost estimate was down from a previous estimate, which itself was up from an earlier estimate of .

"There is overwhelming evidence that the project is entitled to the statutory presumption of reasonable and prudent costs," , an attorney representing Dominion, said during the hearing. "... And if the cost were to rise above this amount, none will be approved unless and until the company demonstrates their reasonableness and prudence in a future proceeding."

Lawyers for the attorney general's , Clean Virginia, the and Walmart were among those questioning a Dominion representative about the project.

, an energy lawyer representing Clean Virginia, said the wind farm would add per month to the typical residential customer bill by 2027 — and that's assuming the project is completed without cost overruns or delays.

He also reminded commissioners that Dominion's project is different from other offshore wind projects in America in that Dominion will own the equity, putting 100 percent of the risk on ratepayers of the investor-owned utility.

State law calls for offshore wind power beyond the 176-turbine project now on the table, which is expected to be finished around 2027. Clean wants the SCC to evaluate whether customers could save money if Dominion doesn't own the equity from future wind turbines.

, a senior assistant attorney general, said the office didn't oppose approval of the project and hopes Dominion can complete it on time and on budget. But he said his office wants the commission to approve protections for customers if the project becomes more costly to construct and operate than Dominion predicts.

"There are many challenges facing mega projects such as this, even more so now with ... severe supply chain disruptions and high inflation," he said. "Simply put, we want the commission to do everything that it can to guard against the problems we have seen in and , where utility ratepayers were left holding the bag when mega projects in those states ran into construction delays and cost overruns."

, Dominion's senior vice president for project construction, testified that the company is monitoring the financial situation of one of its key partners, the Spanish company , which will supply the wind turbines.

Browder read from and introduced as evidence a Reuters article about , which owns a 67% share of Gamesa.

Reuters reported that sales were low due to "worsening problems at wind turbine division Gamesa" which "has been hit hard by supply chain disruptions."

Dominion sought to reassure the two SCC commissioners, and (a third position on the commission remains vacant).

"We would agree that there is no blank check for this project," said , a lawyer representing Dominion.

Cost overruns "are not anticipated at this time," he said. And by approving the project with a stipulation that parties have agreed to, Reid said, the commission reserves its authority to review any cost amounts above .

The company would have to demonstrate that any amounts above that are reasonable, he said.

Tuesday's daylong hearing included opening arguments and then presented its witnesses and testimony. More witnesses from other parties in the case will testify on Wednesday.

passed the Virginia Clean Economy Act, the law governing much of the pending offshore wind case, in 2020, when they controlled the and governor's mansion.

The law puts on a transition to clean energy for electricity generation. But had already engaged in a large buildout of natural gas power plants, so its customers will pay for new clean energy projects on top of existing fossil fuel projects that continue operating.

Dominion"s plan does not include long-duration storage, which would be essential and likely at least as expensive as the wind turbines.

The daily average power generated by the CVOW wind farm would be approximately 31 GWh (1.3 * 24). Therefore, storage capacity of approximately 31 GWh would be required to replace wind farm output for each low/no wind day. Replacing wind farm output over a 10-day wind drought similar to that experienced in the UK and Western Europe in the Fall of 2021 would require long-duration storage of more than 300 GWh. Such long-duration storage is not currently commercially available and there is no schedule for its commercial availability.

Why do you need to "replace wind farm output for each low/no wind day" ? 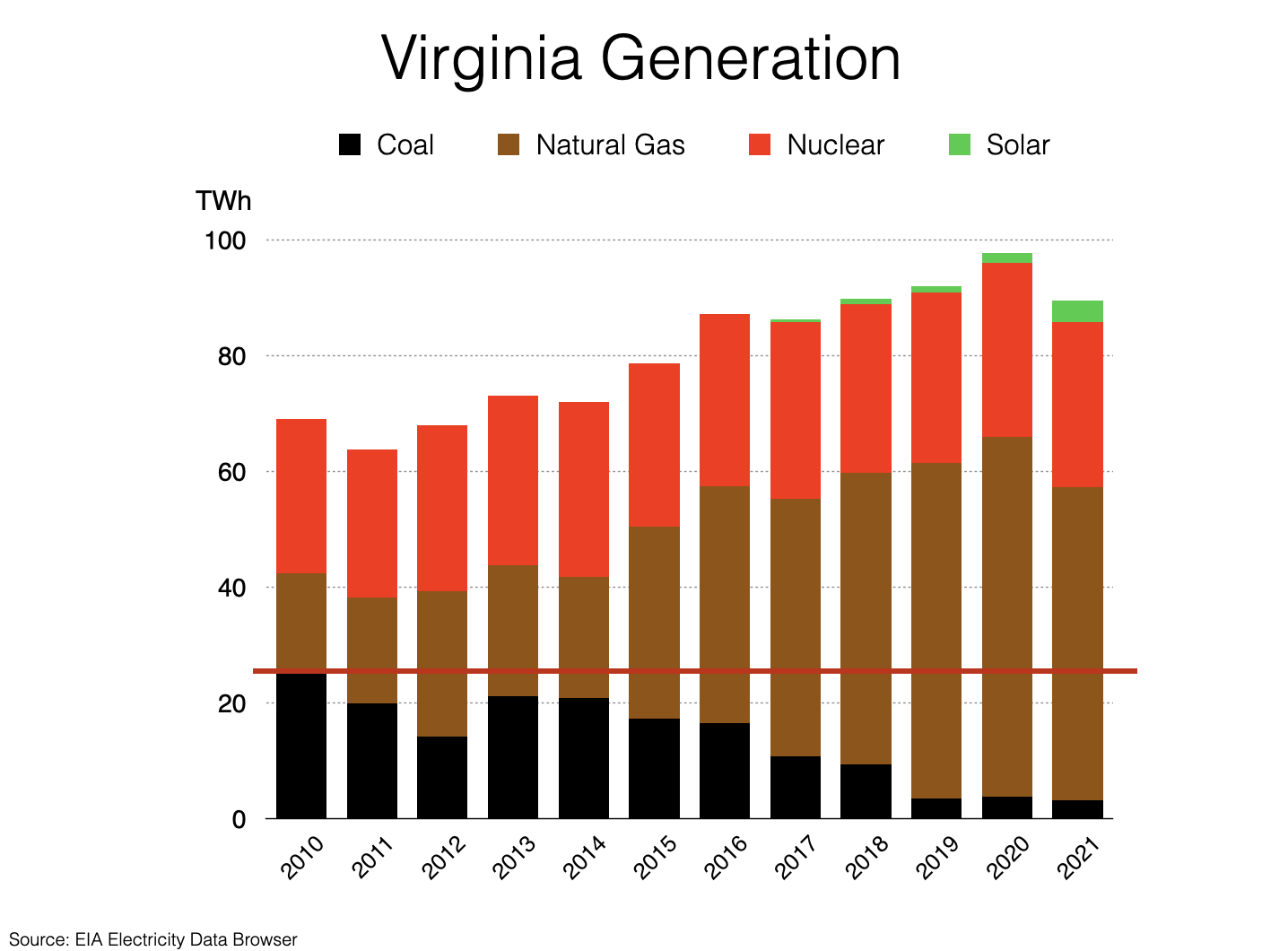 Once coal and NG are gone, what provides power to the grid when the wind is not blowing and the sun is not shining?