Residents of coastal Gippsland have raised concerns about Australia's largest offshore wind farm proposal off the south-east coast of Victoria.

The Star of the South wind farm is 496 square kilometres and hopes to power almost a million homes almost a fifth of Victoria's electrical needs.

In March 2019, the Federal Government approved an exploration license to investigate possible sites for turbines, cabling and power transmission stations.

The company has begun community consultations in coastal towns across Gippsland as part of a more detailed investigation and feasibility study.

Woodside Beach resident Kosta Frans attended the Woodside consultation and told organisers he was worried about the rising cost of electricity.

"We needed it [wind power] 20 years ago, but the thing is, I've got friends in South Australia they've got electricity bills that read like my mobile phone number," he said.

"I live at Woodside Beach, I will see them from my house and at the moment, I can see the gas flame when they're burning off the excess gas, so I'm going to have light on one side and windmills on the other.

"We need the wind power, of course we do, the environment needs it because we're not going to be able to breathe in 20 years' time.

Giffard West resident Nikki Jennings said she supported renewable energy developments but had some concerns about the onshore components of the proposed windfarm.

"I'm very concerned about where the power is going to come onshore, where the easements are going to be, and are they going to use pylons when underground becomes too expensive?" she said.

"They don't have those answers at this stage."

Star of the South executive chairman Terry Kallis hosted the event and received a number of questions about the possible shutdown of fishing channels in the proposed site.

Mr Kallis said there would be exclusion zones for fishing during construction. He said the feasibility investigations included sound monitoring and use of hydrophones to collect data on the patterns of marine animals.

"Let me deal with commercial fishing first. It's a very lightly fished area, we've done some work and research on that and it's even less than what we originally thought," Mr Kallis said.

"When it comes to recreational fishing, I think in the end while there's lots of concerns here, I think they're going to be pleasantly surprised with their ability to continue fishing and be able to coexist."

The first plans for the farm which would be built 1025km offshore from Port Albert originally spread over 570km but has now been reduced to 496km.

"That was part of the consultation with the Department of Energy and Environment in which nine different departments and four different agencies were involved," Mr Kallis said.

"We modified the site to take into account the input from those various departments. This was then approved by Minister [Angus] Taylor in March on an adjusted area.

"The project and its key parameters, like where we connect and what might be some line routes and then the design of where turbines will be, will still take quite a while.

"As those decisions emerge, we will again come back to the community and inform them of our thoughts and seek more feedback.

"You'll probably see some of those things emerge within a year, and some of them might take a little longer."

The Friends of the Earth renewable energy campaign spokesperson, Pat Simons, said the project would be a game changer for action on climate change if it went ahead.

"With the potential to power a million homes of clean renewable energy, that's a really important project for the state and the local community to consider," Mr Simons said.

"In terms of the consultation, it seems like there a number of issues that need to be worked out around exclusion zones and the regulatory framework.

"We'll be paying close attention to how that shapes up over the next year or two." 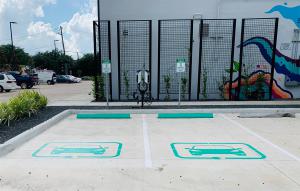