The energy systems of the two largest EU countries differ greatly. In particular, the comparison of the electricity sectors shows the contrasts. Electricity generation in France is dominated by nuclear power with almost 70 percent , while the German electricity mix is ​​based on one third of coal and natural gas as fossil fuels. Follow us in this article as we search for the differences between the two energy systems.

The differences between France and Germany become clear when looking at the primary energy consumption of the two countries. At around 10,000 PJ, France's primary energy consumption was around a third below that of Germany for many years. In addition to the higher economic output, the high proportion of coal-fired power generation in Germany also played an important role.

Primary energy consumption is falling in both countries

Primary energy consumption has been falling in both countries since 2010. Since then, electricity generation from coal in Germany has decreased (particularly from 2017), while the share of renewable energies has increased. Generation from renewable energies also increased in France during this period, albeit to a lesser extent than in Germany. For example, primary energy consumption in France fell by 7.8 percent between 2010 and 2019, and in Germany by as much as 10 percent. The corona pandemic has led to an economic slump in both Germany and France and thus to a drastic drop in energy consumption, as shown in Figure 1 (source: AGEB , IEA ). 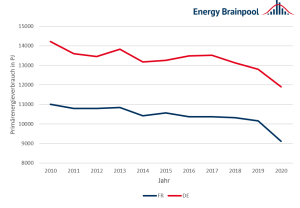 While the share of oil in primary energy consumption is relatively similar in France and Germany, the shares in other energy sources differ widely. In 2019, nuclear energy accounted for 43 percent of France's primary energy consumption. In Germany it was only 6 percent at the time. After 2023, the generation of electricity from nuclear power plants in Germany will drop to zero when the last reactors are shut down. There are also big differences in the proportion of coal. While hard coal and lignite accounted for 17 percent of primary energy in Germany in 2019, the share of coal in France was only 3 percent in the same period (source: AGEB , Climate Transparency). Figure 2 illustrates the shares of different energy sources in the primary energy supply in France (inner ring) and Germany (outer ring). 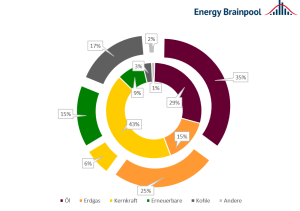 In particular, the relatively low-CO 2 power generation in France contributes to low climate-damaging emissions. The CO 2 intensity of electricity generation in France was around 57g CO 2 /kWh in 2020 (source: Statista ). At the same time, the electricity mix in Germany had a CO 2 intensity that was more than six times as high at 366 gCO 2 /kWh (source: UBA ). The reason for this high discrepancy is the technology used to generate electricity in both countries.

The German power generation capacities can best be described as a colorful mix. With over 120 GW of renewable capacity and more than 70 GW of fossil power plants, Germany had a total capacity of over 220 GW of power plant capacity on the grid in 2020 (source: BDEW ). In France, the total capacity was just over 130 GW, with almost 60 GW of renewable capacity installed. At the same time, the nuclear power plants, with more than 61 GW of installed capacity, make up the majority of French capacities (source: IEA ). Figure 3 compares the generation capacities in the two countries. 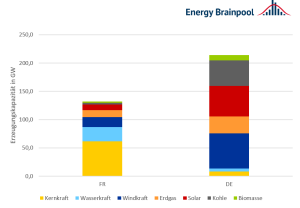 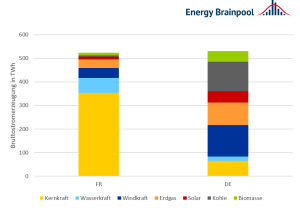 Figure 4: Gross electricity generation in 2020 in France (FR) and Germany (DE) in TWh, excluding other and oil (Source: Energy Brainpool, 2022)

What does the future hold?

With the traffic light coalition, the signs in Germany point to a faster implementation of the energy transition ( to our report on the traffic light coalition ). Even under the impressions of the armed conflict in Ukraine, Europe's energy supply will not remain unchanged. So far, natural gas has been politically very popular as a bridge to climate neutrality. This has changed significantly after the events of late February 2022.

According to a key issues paper dated February 28, 2022, Germany should achieve its power supply entirely from renewable energies by 2035. In addition, the capacity of onshore wind energy is now set to double to up to 110 GW by 2030 (source: Handelsblatt ).

With the inclusion of nuclear power plants in the EU taxonomy (read our detailed article for more on this ), zero -carbon generation in French nuclear power plants could develop even further. However, the power plant fleet is showing its age and the commissioning of new power plants (Flamanville) has been repeatedly postponed while costs have risen (source: IWR ).

The long-term prospect for nuclear power in France is uncertain. According to French President Macron, nuclear energy will still account for a maximum of 40 percent of electricity generation in 2050 (source: Euractiv ).

The cooperation between the two countries with regard to the conversion of their energy systems will certainly have to be intensified in the coming years.

"So far, natural gas has been politically very popular as a bridge to climate neutrality."

Simon, natural gas has never been a bridge to climate neutrality and never will be. Consumption is increasing worldwide, in no small part due to its usefulness as a backup source for renewables.

The "bridge" deception, like hydrogen, is a creation of the resourceful marketing departments at oil majors. With the 1990s came the dawning realization that gasoline, their #1 product, had a limited future. So they employed their vast financial resources to ensure natural gas, and its daughter product hydrogen, became "politically popular". The goal was to leverage public ignorance, together with fear of climate change and nuclear energy, to guarantee extracted fossil fuel an unlimited future.

This time we agree, Methane as a transition fuel has been a massive con both on cost and environmental grounds.

However unless nuclear build costs can be roughly halved and flexibility improved without imposing maintenance penalties it is hard to see nuclear making a dent in methane power generation unless flaring was banned and leaks heavily penalised in addition to a substantial carbon price.

It is interesting to see that EDF has $100s of billions of unfunded liabilities for nuclear plant life extensions even though wholesale power prices are higher in France than Germany.

Both countries have got it wrong, France has a lot of hydro so it can manage higher renewable penetration without investing much in new storage, so it should have been building renewable capacity faster, while Germany should have kept its last six or seven nuclear plants going for another three to five years at least