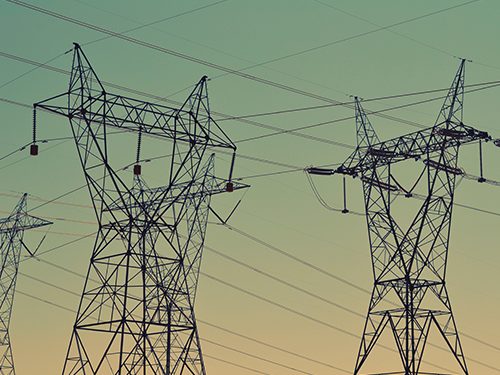 With many Texans still scrambling to recover from a week of freezing cold weather, power blackouts, and water shortages, early analysis in the United States and Canada is pointing to the episode as a wake-up call for grid operators—and electricity users—across the continent.

“The crisis carries a profound warning,” the New York Times writes. “As climate change brings more frequent and intense storms, floods, heat waves, wildfires, and other extreme events, it is placing growing stress on the foundations of the country’s economy: Its network of roads and railways, drinking water systems, power plants, electrical grids, industrial waste sites, and even homes. Failures in just one sector can set off a domino effect of breakdowns in hard-to-predict ways.”

The risk is heightened because “much of this infrastructure was built decades ago, under the expectation that the environment around it would remain stable, or at least fluctuate within predictable bounds,” the news story adds. “Now climate change is upending that assumption.”

In Canada, as well, “the reaction to millions of people stuck without power during extreme weather—in a state practically synonymous with energy richness—shouldn’t be complacency,” warns Globe and Mail columnist Adam Radwanski. “Instead, it should help spark overdue discussions of whether our own electricity systems are being managed in a way to avoid vulnerability to extreme circumstances—of which there could be many more in the years to come, due to both the effects of climate change and efforts to mitigate it.”

“We are colliding with a future of extremes,” former U.S. National Security Council climate risk advisor Alice Hill told the Times. “We base all our choices about risk management on what’s occurred in the past, and that is no longer a safe guide.”

Shalini Vajjhala, a former Obama administration official who now advises cities on climate threats, added that it’s often hard to persuade governments or taxpayers to spend more on disaster preparedness than they think they need to. What they may not realize is that, in an era of increasing climate disruption, inaction is far more expensive.

“Up until now, it’s been an issue of, ‘Well, we don’t think that’s worth it to ratepayers for what might be a very infrequent weather event,’” Tom Seng, director of the School of Energy Economics, Policy and Commerce at the University of Tulsa, told CBC.

But “the argument I would make is, we can’t afford not to, because we’re absorbing the costs” after disasters strike, Vajjhala said. “We’re spending poorly.”

Even with its emphasis on reducing greenhouse gas emissions, there’s concern that the Biden administration isn’t staffing up adequately on climate resilience.

“I am extremely concerned by the lack of emergency management expertise reflected in Biden’s climate team,” Massachusetts Maritime Academy disaster policy specialist Samantha Montano told the Times. “There’s an urgency here that still is not being reflected.”

A White House spokesperson said the drive to build resilient, sustainable infrastructure “will play an integral role” in the new administration’s green jobs plan. But “getting a closely divided Congress to spend hundreds of billions, if not trillions of dollars, will be a major challenge,” the Times writes. “Heightening the cost to society, disruptions can disproportionately affect lower-income households and other vulnerable groups, including older people or those with limited English.”

In Canada, Radwanski agrees that climate adaptation “still tends to suffer for public investment and attention. That’s going to need to change in many ways, ranging from urban planning to agriculture, and strengthening power grid reliability is among them.”

Radwanski adds that a “less obvious component of climate-related policy” could “pose a bigger threat of winter power outages if inadequately planned: the shift from fossil fuels to electricity for heating houses and other buildings.” While that transition “is very necessary for climate change mitigation,” he explains, “electrifying heating poses a unique challenge to energy systems, because of one dynamic in Texas’s troubles that does translate north of the border: surging demand during the coldest days of the year.” While grid operators can handle rising electricity use when it’s predictable, peak demand for cooling or, more likely in Canada, electric heating, can drive the kind of price spikes and blackouts that Texas has just experienced.

Francis Bradley, president and CEO of the Canadian Electricity Association, told CBC the crisis in Texas was “unfortunate, but not unforeseen,” but said the state’s fully deregulated electricity market doesn’t engage in the same long-term planning that goes on in most Canadian provinces.

“The market signals don’t necessarily move in the right direction to facilitate these kinds of long-term investments that are required,” he said. But most provincial electricity systems in Canada are regulated, and the partially deregulated grids in Alberta and Ontario still have strong long-term planning and emergency preparedness.

In particular—in contrast to a state that has until now prided itself on going it alone, with no significant interconnections to other state grids, “every province is connected either east-west or north-south, and in many cases both,” Bradley said.

“And, yes, it could mean a bit of compromise in completely eliminating fossil fuel usage,” he writes.

Earlier in the week, Greentech Media looked at similar technology and market fixes available to Texas.

As the crisis played out across the Lone Star state, Texans began facing up to the reality of food shortages, after massive amounts of spoiled stock had to be thrown out. They also heard about a suburban Austin retailer that decided to put its customers first—and earned their undying gratitude along the way—by letting people leave without paying for their baskets full of groceries after the electricity shortage took out its cash registers and e-payment machines.

“The show of kindness this week at the H-E-B grocery store in Leander, TX has gone viral, a bright spot in a crushing week for Americans weathering a deadly winter storm that left people scrambling for food and clean water after mass power outages,” the Post writes. “Hennessy’s Facebook post about the episode exploded, and a Friday op-ed in the Houston Chronicle contrasted the generosity in Leander with authorities’ failures: ‘Why H-E-B comes through in a crisis when Texas government doesn’t,’ the headline read.”

Meanwhile, Bloomberg News says it could take weeks to restart four large oil refineries that were damaged as a result of the grid shutdown. “ExxonMobil Corporation’s Baytown and Beaumont plants, Marathon Petroleum Corporation’s Galveston Bay refinery, and Total SE’s Port Arthur facility all face at least several weeks to resume normal operations,” the news agency writes, prompting an analyst with retail tracker GasBuddy to predict pump prices as high as US$3 per gallon if shortages extend into the spring driving season.

“As blackouts that left millions of homes in the dark end, and frozen roadways thaw, drivers can take to the road again,” Bloomberg explains. “But refineries are left with burst pipes, leaks, damaged equipment and, in some cases, petroleum fluids that hardened into a sort of wax because the flow stopped.”

Which means that “restarting a refinery isn’t like flipping a light switch when the power comes back on. In addition to fixing any damage, getting back online involves slowly heating up units, testing all the way, then slowly ramping up so they are running fluid again. And then, testing and retesting the output until it meets specifications.”