Prices on the European spot markets for electricity are at their highest levels since the beginning of exchange trading. The exchanges had to introduce higher price limits to react to the situation. What is currently happening on the short-term markets and what will happen in winter?

In most European countries, short-term prices for the physical delivery of electricity are formed via spot markets on energy exchanges. The day-ahead market plays the largest role, accounting for about 80 per cent of exchange-traded volume. Here, the hourly electricity prices for the next day (day-ahead) are determined daily by an auction with producers and buyers. In general, therefore, both suppliers and consumers influence the level of prices through their bids and volumes.

On the generator side, the short-term generation cost of the last power plant to meet demand determines the price. All producers receive this price and all buyers of electricity must pay this price. Price elasticity on the electricity buyer side is very low. This means that demand for electricity reacts only slightly to price changes. Energy suppliers have to buy electricity for their customers even when prices on the spot market are high in order to continue supplying them. Nevertheless, lower electricity demand due to efficiency measures in industry or savings in households have an effect on demand and lower prices.

Thermal power plants such as coal and gas-fired power plants are price setting in many hours on the day-ahead market, and their specific power generation costs depend heavily on fossil fuels. Figure 1 shows the average marginal cost components of gas and hard coal power plants since Q4 2021. 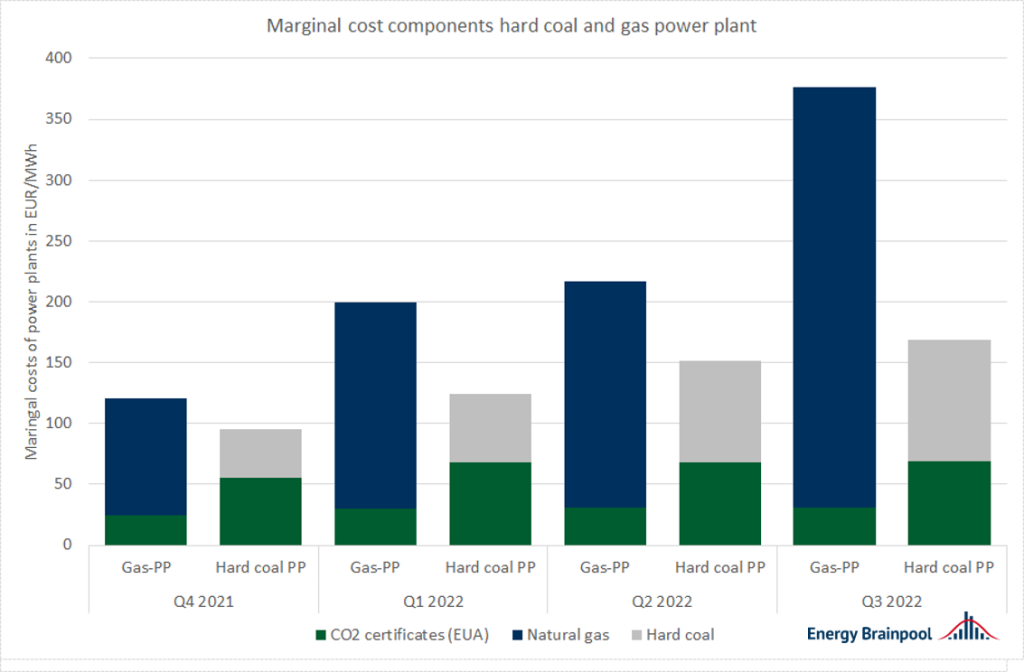 Here it becomes clear that the fossil fuels and not the costs for CO2 certificates are the price drivers. The cost share of CO2 certificates has decreased over time. In addition, it is obvious that coal-fired power generation is more cost-effective than gas-fired power generation: gas prices have risen much more sharply than coal prices. The price of gas in particular has risen by more than 1000 per cent compared with the start of 2021 due to Russia’s supply restrictions. Thus, the current price spikes on the spot market are mainly due to the very high prices of fossil primary energy sources such as coal and natural gas.

Figure 2 shows the day-ahead prices on EPEX SPOT for Germany since 2019. Clearly, power prices have been deviating from the long-term average and moving upwards since as early as mid-2021. 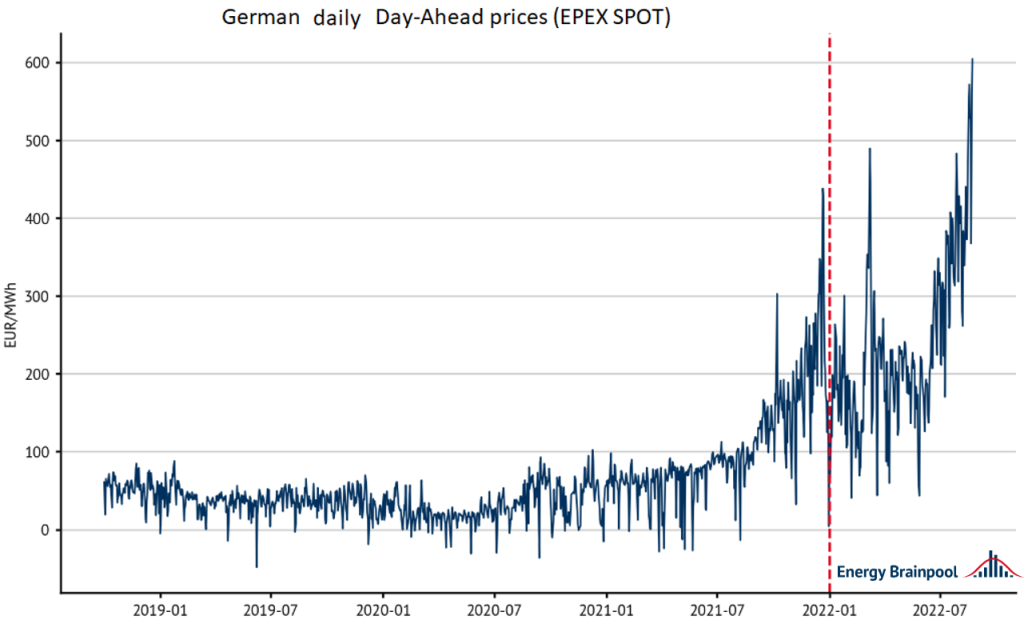 After the outbreak of war in Ukraine, electricity prices initially shot up immediately, but then fell again. Since the sharply reduced gas flows from Russia in mid-June 2022, spot prices for gas rose to a record level, and due to this, electricity prices also rose again. So far, in 2022, spot electricity prices are five to ten times higher than in previous years. On August 22, the daily spot market price for Germany exceeded 600 EUR/MWh, 15 times the average of the 2010s. In August 2022, the German record for day-ahead prices (daily values) was broken six times (on 8/3, 8/16, 8/17, 8/18, 8/23, and 8/24).

Development in other EU countries

Short-term electricity prices are also at record levels in other European countries. In particular, France, Italy and the Baltic region are affected. In France, electricity prices are even higher than in Germany. The low availability of French nuclear power plants due to weather and repair-related outages is affecting the neighbouring country. Currently, only about 45 per cent of nuclear capacity in France actually generates electricity: a 30-year negative record (source: Montel). As European electricity trading on EPEX SPOT is also handled on a cross-border basis, more electricity flowed from Germany to France this year, as consumption there could not be fully covered by France’s own generation, or would have been even more expensive than generation in and imports from Germany.

Electricity exports from Germany to France increased six fold in the second quarter of 2022 compared with the previous year (source: Montel). Low generation from French nuclear power plants has also increased German day-ahead electricity prices, especially since May 2022. Figure 3 shows the monthly average of day-ahead prices for selected European countries since the beginning of the year, illustrating the increase in almost all countries. 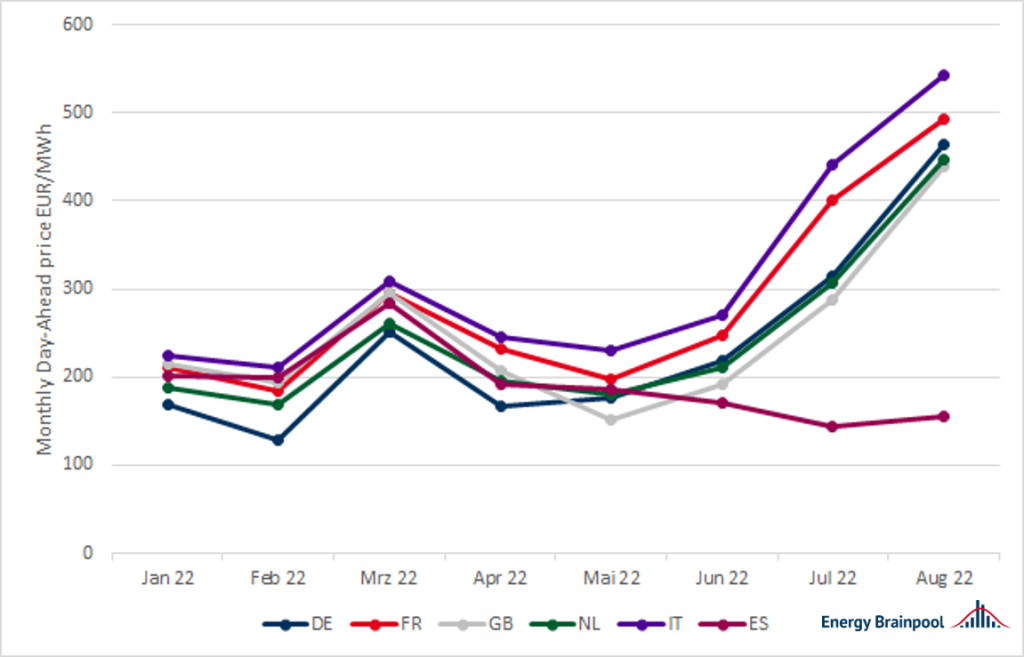 Since the Iberian Peninsula is less integrated into the European interconnected grid, the Central European markets with high prices do not exert such an upward pressure on Spanish day-ahead prices. Other reasons for the declining electricity prices in Spain since June 2022 are the independent supply of Spain by liquefied natural gas and thus lower primary energy prices than in other EU countries, as well as a state-imposed maximum price for natural gas used in gas-fired power plants for generation (source: EU Commission). The price of natural gas used in power generation was limited by the Spanish government to 48.8 EUR/MWh. In comparison, gas prices on the spot market in Central Europe are over 240 EUR/MWh as of the end of August.

Spot prices for electricity of over EUR 1000/MWh are presently also not uncommon in the Baltic states. On August 16, 2022, the spot price for one hour even reached the 4000 EUR/MWh mark, as not enough generation capacities were available. The Lithuanian transmission system operator Litgrid then activated 50 MW of peak load capacity to provide for the shortfall (source: Montel). The background for the conditions in the Baltic states is the fastest possible dissolution of the network interconnection from Russia.

In fact, the minimum and maximum electricity prices in the day-ahead auction are capped: for a long time, bids could only be submitted between -500 EUR/MWh and +3000 EUR/MWh. However, back in 2017, the operators of the European power exchanges stipulated that the maximum possible price must be increased by 1000 EUR/MWh if the price in a power market was above 60 per cent of the previous maximum. This adjustment of bid levels is intended to enable electricity trading to continue to function even in extreme situations.

Already in spring 2022, the power exchanges implemented an increase of the maximum price to 4000 EUR/MWh. The trigger was a price of 2987.88 EUR/MWh for the hour from 8 to 9 a.m. on April 4, 2022 in France (source: Montel). At the end of August, the power exchanges determined that the maximum price would be raised to 5000 EUR/MWh across Europe due to the limit being reached in the Baltic states. The implementation is scheduled to take place on September 20.

Outlook for the winter

Electricity prices on spot markets are generally higher in winter than in spring and summer due to higher electricity consumption. This year, there is the added fear of a gas shortage. Since gas-fired power plants often determine the price on the day-ahead market during peak electricity demand periods, it is likely that low gas imports in winter will lift both gas and electricity prices to new records. The main risks that could exacerbate the shortage situation are a cold winter, a reduced supply of LNG due to rising prices in Asia, an insufficient reduction in gas demand in Europe, a complete absence of Russian gas supplies, and continued low availability of the French nuclear fleet.

The futures market provides an outlook on market prices. Traders can trade a future delivery period there. Today’s prices on the forward market therefore reflect the expected average electricity price for the delivery period of the respective product. At the end of August 2022, the price for base-load delivery of electricity for the fourth quarter for Germany stood at 1000 EUR/MWh. Prices for the fourth quarter have increased since the 60 per cent reduction in Russian gas supply through the Nord Stream 1 pipeline in mid-June 2022.

At the end of August, prices rose extremely. The background to this was Gazprom’s further announcement to interrupt the gas supply via Nord Stream 1 for the first days of September. In contrast, prices fell at the beginning of September due to the high filling levels of the German gas storage facilities and the announcements by the EU to intervene in the price formation on the spot markets for electricity (Figure 4).

Figure 4: development of the price for baseload electricity supply for Germany in the fourth quarter of 2022, source: Montel