Shutting Out Natural Gas Can Destabilize the Electric Grid It has been an annus horribilis for the nation’s electric utility companies. Deadly storms and wildfires have left hundreds of thousands — and for short periods millions — of electricity customers without power, sometimes for days and weeks.

These destructive weather events have come at a time when utilities are being squeezed from all directions: By customer needs, by activists’ demands, by state regulators, and by the zero-carbon urgency of the Biden administration as expressed in its bill, the Build Back Better Act, to upgrade and overhaul the nation’s infrastructure.

The utilities themselves have set ambitious carbon-emission-reduction goals, but in some cases, they still can’t meet the demands of the government. They are caught between the clear need to harden their infrastructure against severe weather and shuttering their reliable but polluting coal plants and mothballing their dependable gas turbines.

This predicament caused Jim Matheson, president of the National Rural Electric Cooperative Association, which represents hundreds of utilities, mostly small, in rural areas, to ask Congress to make exceptions, or at least to understand that things can’t be changed overnight. In a letter to House Committee on Energy and Commerce Chairman Frank Palone (D-N.J.) and ranking minority member Cathy McMorris Rogers (Wash.), Matheson said there was concern with the Clean Electricity Performance Program (CEPP) part of the bill.

“The CEPP’s very narrow, 10-year program implementation window is unrealistic. The electric co-ops have existing contractual obligations and resource development plans that extend for several years, if not decades. Many of those plans continued deployment of a diverse set of affordable, clean electricity sources, but not all those plans align with the CEPP. …. The narrow implementation window also limits our ability to take advantage of technologies like energy storage, carbon capture, or advanced nuclear, which are unlikely to be deployable in the near term,” Matheson said.

The predicament of utilities is that there is no reliable storage and that the two principal sources of renewable power, wind and solar, are subject to the vagaries of weather. During Winter Storm Uri, which hit Texas last February, solar, along with all other sources of energy, froze under sheets of snow and ice. The result was disaster and heavy loss of life.

In that instance, gas didn’t save the day: Lines and instruments froze, and what gas was available was sold at astronomical prices.

The lesson was clear: Prepare for the worst. That lesson was repeated in a series of hurricanes, including devastating Ida which plunged parts of Louisiana into the dark for more than a week.

If the lesson hasn’t been grasped in the United States, it is being repeated in Europe right now. A unique wind drought that lasted six weeks has left the European grid reeling and has thrown Britain into a full energy crisis.

The issue is not that alternative energy — wind and solar for now — isn’t the way to go to reduce the amount of carbon spewing into the atmosphere. Instead, it is not to destabilize what you have by prematurely taking gas offline.

Gas has certain useful qualities not the least of which is that it can be stored. Storage is the bugaboo of alternative energy. Batteries are good for a few hours at best and the other main way of storing energy, pumped storage, requires large expenditures, substantial engineering, and a usable site. It requires the creation of a big water impoundment, which will provide hydro when extra power is needed. It works, it is efficient, and it isn’t something that you build in a jiffy.

I have spent half a century writing about the electricity industry and when it comes to decarbonization, I can say that while many in the industry were doubtful about global warming at one time, the industry now is committed to eliminating carbon emissions by 2050.

The joker is storage or some other way of backing up the alternatives. That may be hydrogen, but a lot of research and engineering must take place before it flows through the pipes which now carry natural gas. Likewise, for small modular reactors.

The Economist, pointing to Europe, says that the Europeans have destabilized their grid by failing to prepare for the transition to alternatives, triggering a global natural gas shortage. Gas should be used sparingly and treasured. The trick is to throw out the bath water and save the baby.

The Economist, pointing to Europe, says that the Europeans have destabilized their grid by failing to prepare for the transition to alternatives, triggering a global natural gas shortage. Gas should be used sparingly and treasured.

Natural Gas Generation will remain a critical component of a reliable electric grid, especially here in New England for many years to come, as the region transitions to zero emission resources.

"The issue is not that alternative energy — wind and solar for now — isn’t the way to go to reduce the amount of carbon spewing into the atmosphere."

Yes, Llewellyn, that is the issue. Wind and solar require gas to be viable on an electrical grid. As long as we keep adding wind and solar the percentage of gas generation on the grid will increase, and a hard limit on emissions reductions will remain. 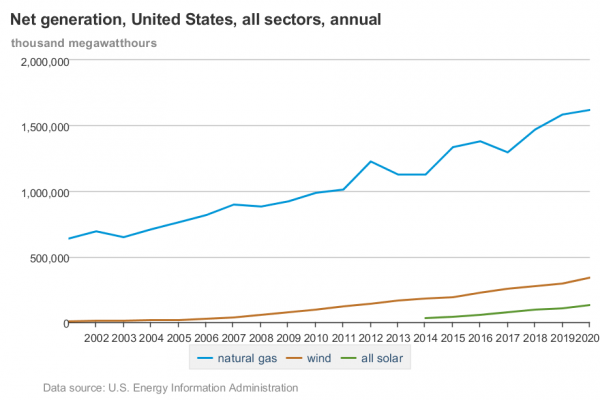 Contrary to popular perception gas - like wind and sunshine - is a "just in time" fuel, too. No gas is stored at electricity power plants. Every one is dependent upon a functional network of hundreds of miles of pipelines to keep the lights on (ERCOT's February experience was a near-perfect example of what happens when a statewide supply of methane is disrupted by cold or transmission constraints).

There are millions of us in the U.S. who recognized - decades ago - that adding wind and solar to the grid could only mean a future of unreliable electricity. We recognized that nuclear energy, with eighteen months of fuel stored onsite (not "advanced nuclear", a can to be kicked down the road indefinitely) is not just an answer for clean, reliable electricity - it is the only answer.

When you drive into the " decarbonization road " , you have to be extremely careful with several issues that a power system has to consider.

- the intermittencies of renewables , and how to handle them.

- the essential needs of a power system, that can be resumed as security, adequacy, controllable reserves and resilience

- the need to consider in operational planning studies the possibility of " extreme events " that might lead to big contingencies trhoughout the system.

In this way, it is of paramount importance to define the so- called transition fuels, and the two best candidates for this role are gas fired plants, nuclear plants , or both together.

On the other hand we should always analise the developments foreseen in the two sides : renewables ( adequate storage, virtual inertia, new voltage and frequency controllers , etc), and " support sources" ( CCUS, green hydrogen, etc). But both ways are future, so, currently we have to maintain the " support sources " as they are.