This article may be something of a blueprint for "small" renewables development. In one form or another, it may be repeated thousands of times and reshape electricity provision in the US. It is all under the unlikely name of a 2019 Maine law “that expanded the scope and incentives in a program that promotes solar energy development, a policy called "net energy billing.”"

At its core, it´s very simple:

“Net energy billing provides a generator with credit for renewable power it has produced and sent to the electric grid. Prior to 2019, eligibility was restricted to small projects rated below 660 kilowatts of capacity and fewer than 10 customer accounts. Those arbitrary caps reflected the opposition from former Gov. Paul LePage and many Republican lawmakers, and translated into restrictive rules at the Maine Public Utilities Commission."

"The rules changed drastically in 2019, following the election of Mills and a Legislature dominated by Democrats. Eligible capacity was boosted to under 5 megawatts; account caps were eliminated.”

"Those changes unleashed a flood of community solar projects"

“Lawmakers are reviewing the net energy billing policy, hoping to find the sweet spot that both encourages renewable energy and offers the greatest benefit to electricity customers. «At issue is whether the incentives that have attracted a stampede of solar investment to Maine are too generous and should be trimmed.» “

«But the financial incentives that have put Maine on the radar of clean-energy developers across the globe aren’t being shared equitably with electricity customers, in the view of Sen. Trey Stewart, R-Presque Isle. He’s introducing measures that would eliminate the net energy billing program and cap the value of certain clean-energy contracts. Stewart said he doesn’t want to kill the solar industry, just make the benefits more fair.»

In other words, one might say,  it has to be made sustainable for both developers and consumers.

The model involves customers who stand to gain by subscribing to a share of the project and then receive a credit on their bill, based on their use. The rest of the credits go to the developer and investors, the revenue stream that pays the costs to build and operate the assets. 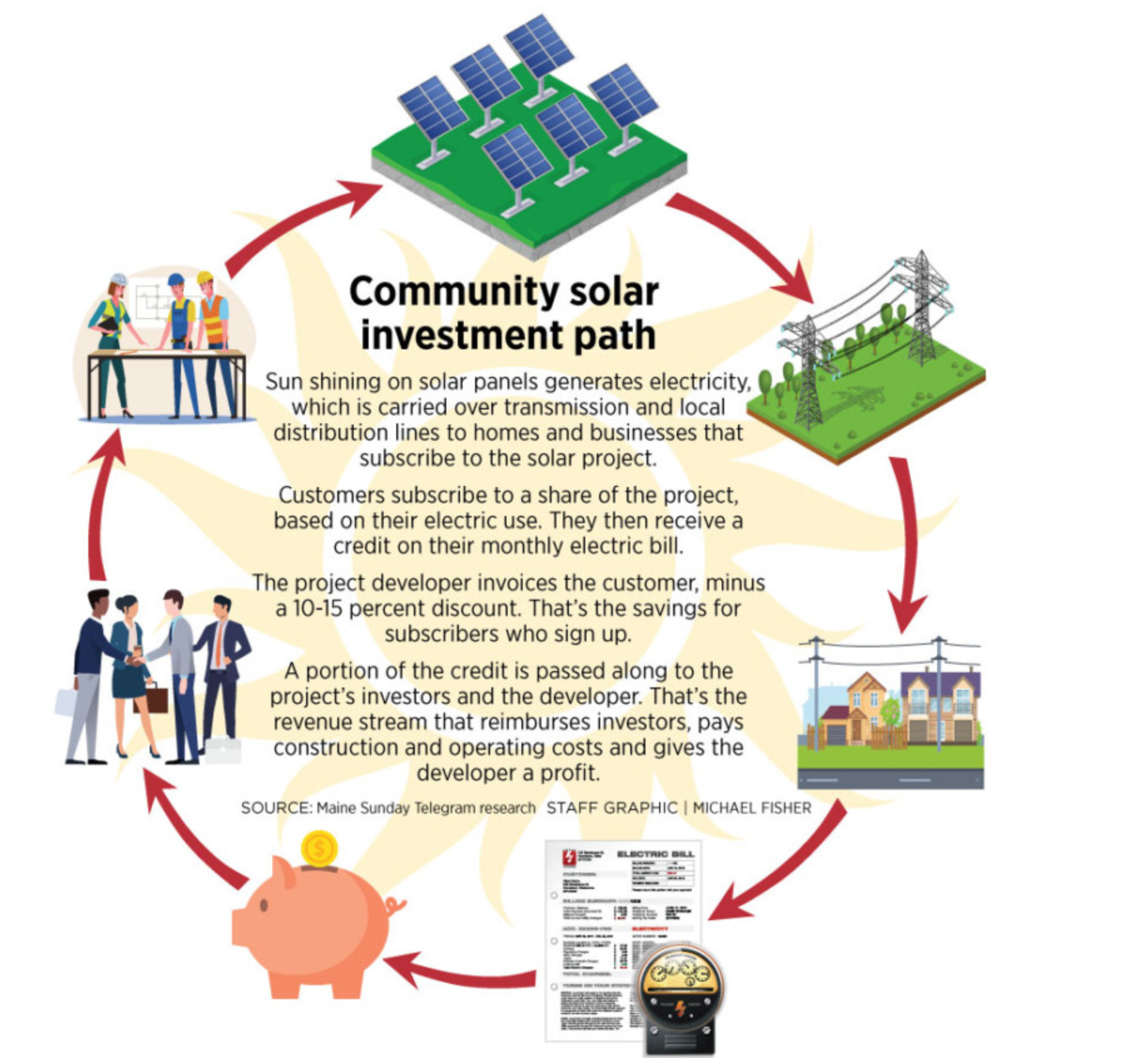 But the solar boom hasn’t come without concerns:

"Last fall, the PUC presented a report to Berry’s committee that found the current net energy billing program would lead to a “substantial increase in electric rates” for customers. That would have a negative impact on state goals to shift heating from oil to efficient electric units, the PUC said."

• Should there be some sort of cap, perhaps in megawatt capacity, on ratepayer exposure to increased costs from power contracts?

• Should there be incentives to site solar in locations where it’s most advantageous, such as old landfills or where it strengthens the local distribution system?

• Should there be incentives to pair solar projects with battery storage, which would increase the capacity and value of intermittent energy?

Finding that so-called “sweet spot”, that which attracts the capital investments AND offers the greatest possible benefits to consumers AND selects sites wisely, may be an elusive goal. But that is the challenge.

Net-metered solar in Maine? It doesn't even make sense in California:

“When households adopt solar, they’re not paying their fair share,” Fowlie said. While solar users generate power that decreases their bills, they still rely on the state’s electric grid for much of their power consumption — without paying for its fixed costs like others do. At the same time, the state has set high goals toward decreasing reliance on fossil fuel, including by encouraging residents to switch to renewable energy like solar, which often bears a high cost of entry due to costly equipment and installation.

“As this continues it’s going to make electricity even more unaffordable,” said F. Noel Perry, founder of Next 10, which funds nonpartisan research on the economy and environment.

PG&E spokesperson Kristi Jourdan said in an email statement that the company was committed to keeping prices as low as possible and that although some programs are meant to be subsidized through rates, “in other cases, given that some customers have greater access to energy alternatives, the remaining customers – often those with limited means – are left paying unintended subsidies.”

Lots of things makes sense to Mainers, but not to Californians. Thank goodness!

The model involves customers who stand to gain by subscribing to a share of the project and then receive a credit on their bill, based on their use. The rest of the credits go to the developer and investors, the revenue stream that pays the costs to build and operate the assets.

Great way to expand the reach of solar to customers who can't and otherwise wouldn't be able to take advantage of the benefits of personally owning solar. Glad you're highlighting a lot of the important questions that still need to be answered, but even more more glad that Maine is pushing ahead on these while investigating the questions