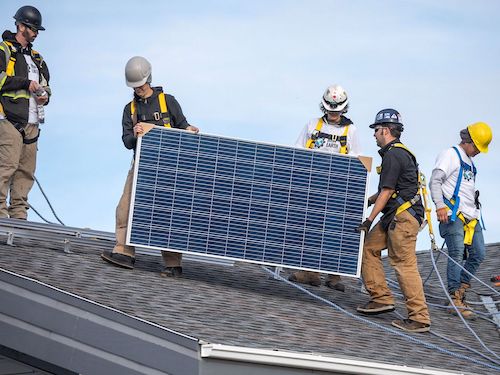 Though politicians in Texas might insist on wrongly blaming renewable energy for the devastated condition of the state’s power grid, people in northwestern Missouri know what to do. A solar company in St. Joseph, about 55 miles north of Kansas City, says its phones have been ringing off the hook as customers respond to rolling blackouts in the region and across much of the United States.

“Solar Energy LLC hasn’t had such a high demand for solar installation since the business began in 2011,” News-Press NOW reports. The “overwhelming number of phone calls” prompted a special meeting of company executives and consultants Monday evening to figure out how to meet the demand.

“We got together for about three hours trying to decide how we’re going to field all these phone calls and get all these bids out to people in a timely manner,” said company consultant Mindy Marsh-Jarrett. “We were very busy last year, but I’ve got more jobs lined up in one month than I did almost a whole year last year.”

Rooftop solar won’t completely protect a homeowner from power system failures. “Households still remain connected to the grid system and can experience inconveniences like a rolling blackout,” News-Press NOW notes. “However, many solar companies offer generators or battery banks in the case that electricity becomes unavailable. Generators or battery banks won’t power an entire household but will be enough to run essential components like heating systems.”

Which is a far cry from the situation in Texas, where cases of carbon monoxide poisoning are surging as people try to stay warm by whatever means they can.

Citing Zillow, News-Press NOW says rooftop solar panels can increase the value of a home by about 4.1%, while cutting utility bills. In 2019, Missouri generated 73% of its electricity from coal.