The EU Commission has presented a new legislative package with more ambitious goals. The results of the coal and solar tenders have been announced. While the PV tenders were significantly oversubscribed, the bid volume for the coal tenders was not that high. New records were set on the short-term and futures markets.

On July 14th, the EU Commission presented an extensive legislative package that sets the course for the new climate target. It contains drafts for twelve legislative procedures that are to be negotiated and adopted in the coming months. The aim is to reduce CO 2 emissions by 55 percent - instead of the previous 40 percent - compared to the reference year 1990 by 2030. The CO 2 price plays a key role in achieving this goal . It is planned to lower the CO 2 upper limit in the European emissions trading system (EU ETS) and expand it to include ship transport and aviation (source: Montel). The target for the use of renewable energy by 2030 has been increased to 38 to 40 percent of gross energy consumption - previously the target was 32 percent (source: pv Magazine ). You can read more details about the effects on European and national climate policy here . 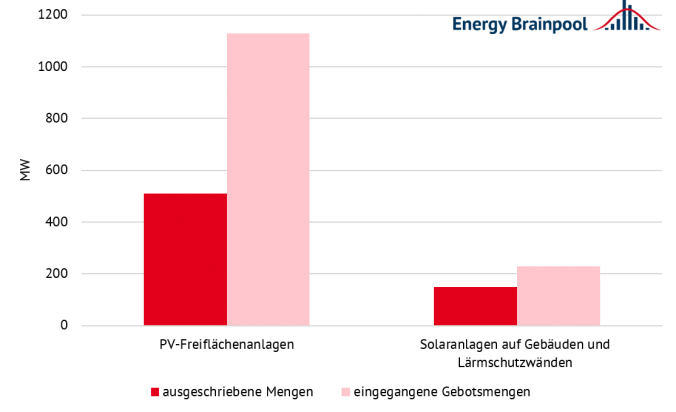 Figure 1: Results of the PV tenders in the first and second segment (source: Energy Brainpool).

In mid-June, the results of the first and second segments, both of which had their bidding dates on June 1, were published. Both segments were clearly oversubscribed.

In the first segment, bids from providers with ground-mounted systems larger than 750 kW can participate. A total of 242 bids with a volume of 1,130 MW were submitted. This means that the tendered amount of 510 MW has been doubled. 95 bids with a total output of 513 MW will be accepted. The award values ​​determined in the bidding process are between 4.69 ct / kWh and 5.69 ct / kWh. The volume-weighted average award value is 5 ct / kWh (source: Federal Network Agency ).

For the first time, tenders were also carried out for the second segment. Solar systems on buildings and noise barriers with an installed power greater than 300 kW can submit bids. 168 bids with a volume of 213 MW were received. With a tendered amount of 150 MW, these were also significantly oversubscribed. Only 114 bids with a volume of 152 MW could be accepted. The surcharge values ​​are between 5.35 ct / kWh and 7.89 ct / kWh. The volume-weighted average award value in the first round is 6.88 ct / kWh (source: Federal Network Agency ).

This year there is another technology-specific tender for each of the two photovoltaic segments. For ground-mounted systems, this will take place on November 1st, with a provisional volume of 509.52 MW. The next round of tenders for roof systems will again have a volume of 150 MW and will take place on December 1st (source: pv Magazine ). 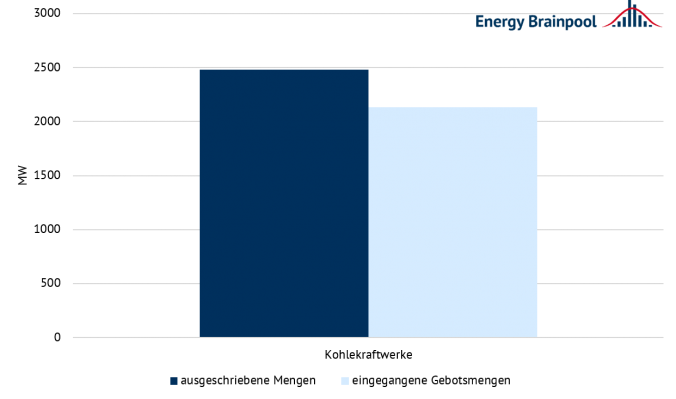 A quantity of 2,480 MW was put out to tender. Despite the large participation, these tenders were easily signed. In total, eleven bids were received with a total of 2,133 MW. It was thus possible for all bidders to win a bid. The bids varied between an output of 8.4 MW to 717 MW. The volume-weighted average award value is 102,799 euros per MW. As of December 31, 2022, only a maximum of 15 GW of hard coal and small-scale lignite plants are to be connected to the power grid in Germany and, despite easy signing, this target will most likely be achieved.

The quantities not purchased will be taken into account in the next round of tenders, which will take place on October 1st (source: Federal Network Agency ).

In July 2021, commodity prices initially fell until they rose towards the end of the month and then returned to the level at the beginning of the month. The front year contract for electricity approached a 13-year high at the end of the month with rising CO 2 prices. The contract almost reached the level on July 5 at EUR 75.60 / MWh - the highest Fronjahr price since 2008 (source: Montel ). After the EU Commission raised the CO 2 reduction target for 2030 in mid-July , there has been another sideways trend in EUA contracts. It is estimated that the CO 2 price will fluctuate between EUR 50 / t and EUR 60 / t in the following months (source: Montel). In addition to the front year of electricity, the front year of coal reached a ten-year high of USD 95.70 / t due to a lack of supply. (Source: Montel ).

There is movement and uncertainty on the oil market because OPEC + has agreed on an increase of 0.4 million bbl / day from August 2021. This increase is to be reassessed at the end of the year (source: Montel ).

The percentage price development of the commodities can be seen in Figure 3 (source: Montel ).

High prices and negative prices on the German short-term market

On July 4th, the generation of wind and solar collapsed unexpectedly and the wind feed-in was 8.8 GW below the norm. This led to a record increase in the day-ahead price. The base load rose to a 13-year high of 109.04 EUR / MWh, the peak load was 118.12 EUR / MWh. (Source: Montel ). In contrast, the solar feed-in reached around 27.4 GW on July 19, ie around 6.7 GW above the norm. As a result, the electricity prices on the day-ahead market slipped into the red and fell by as much as -5 EUR / MWh (source: Montel ). 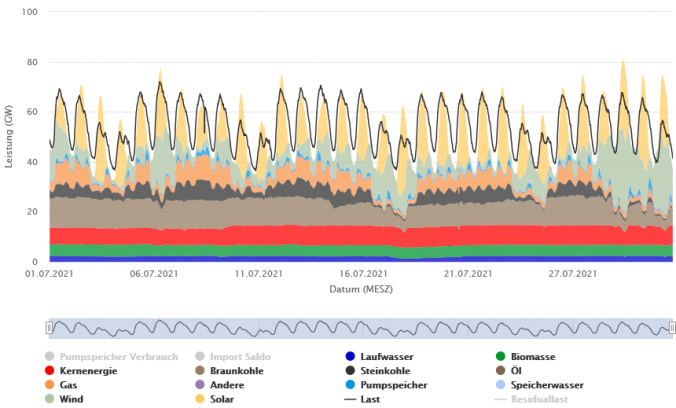 What happened in the energy market in June 2021? You can find the previous blog post here.