Flexibility: Key to the success of the distributed energy transition I am an entrepreneurial energy industry professional with over a decade of experience in management consulting and the energy industry. I currently focus on evaluating new technologies and...

This item is part of the Business Side of Running a Utility in 2022 - February 2022 SPECIAL ISSUE, click here for more

As the country continues to march towards a decentralized energy system, traditional utility business models and processes will inevitably be impacted. Current federal and state legislation enacted to help combat climate change has resulted in the rapid deployment of distributed energy resources (DERs) including solar, wind, electric vehicles (EVs), batteries, and other communicating loads. Proposed federal legislation, such as elements of the Build Back Better Act, will only serve to accelerate the adoption of DERs through favorable tax treatment.

Widespread adoption of DERs will cause load to act in novel ways on the distribution grid. The utility business model of the future will need to be flexible. New, innovative rate structures will also need to be flexible to engender the desired public policy outcomes that are spurring the deployment of DERs.  Grid edge monitoring and control technologies will be critical for utilities as they develop rate designs and Time of Use (TOU) periods to help accommodate the unique operational characteristics of DERs and help ensure that we are collectively move towards a low carbon future.

Large numbers of DERs such as solar are presenting grid challenges and in many cases exacerbating the well-known “duck curve” phenomenon.  The middle of the night used to reliably represent the time of lowest demand on the grid, and off-peak rates could be set accordingly. However, self-consumption of solar in certain areas of the country is causing low net demand during the middle of the day, essentially redefining the off-peak period. According to the Solar Energy Industries Association, California has over 33 GW of solar installed[1]. This represents almost 1.4M individual installations and is enough energy to power over 9.5M homes. Figure 1 below from CAISO shows that on a spring day, demand is lowest around lunch time, with a nearly 3x increase in net demand by dinner time. The practical implication of excess production and low demand in California, especially during shoulder months, was that 3,092,337 MWh[2] of renewable energy had to be curtailed in 2020 and 2021, the equivalent of just under 700,000 tons of CO2[3]. 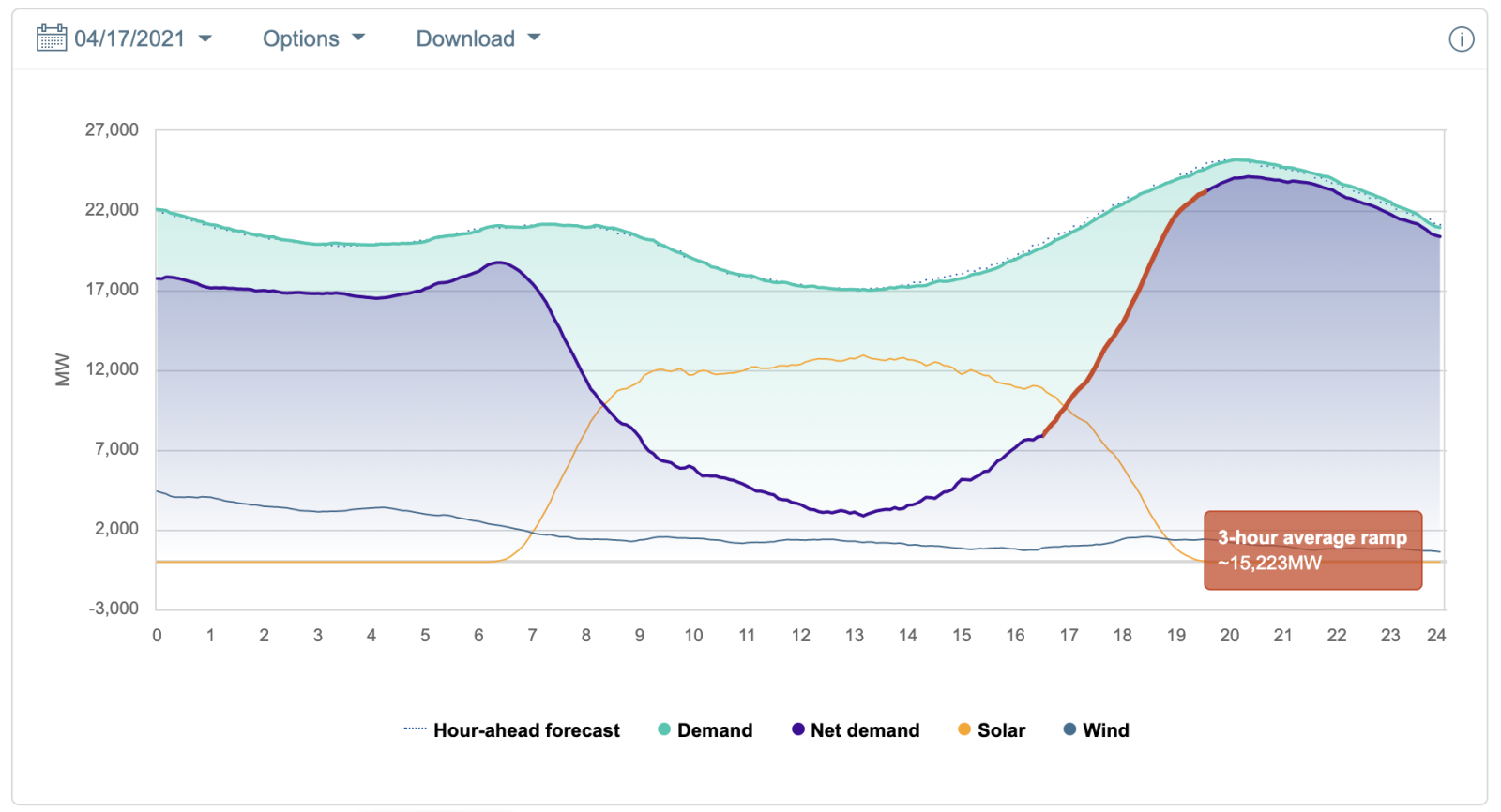 This phenomenon is not unique to California and is becoming more ubiquitous in other regions with high penetration of DERs, especially solar. Australia has averaged nearly 6 GW per year of new small rooftop solar[5].  South Australia specifically has seen high rates of solar saturation and is another good example of the resulting changes in load shapes that accompany large solar penetration. Figure 2 below shows how — like in California — minimum demand in South Australia is occurring during the middle of the day, with huge swings between weekdays and weekends.  These light load conditions can present operational challenges for the grid such as unwanted back feeding into the system or premature failure of voltage control equipment due to overuse. As mentioned previously, lack of demand during periods of high renewable output can also result in curtailing renewable energy production. 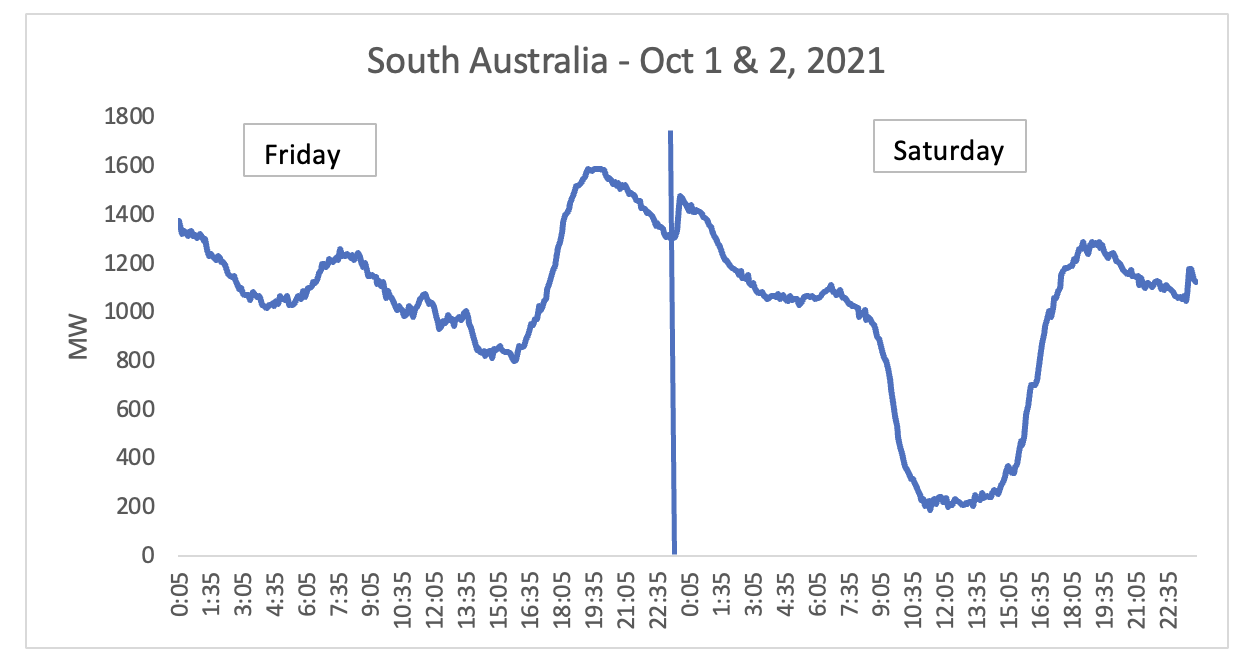 So what does this all mean for the utility business model and rate structure of the future? At the highest level, it means we must be flexible and rethink how we define peak vs. off-peak time periods and rates. It is clear that there would be value in offering off-peak rates during specific times in the middle of the day to help bring up the minimum demand levels and mitigate the steepness of the evening ramp. South Australia, in fact, has started down this path by changing their TOU off-peak period to 10AM-3PM[7]. Current off-peak time periods for many utilities are usually long in duration, with off-peak periods typically from 8AM-4PM and then again in the middle of the night. It may be helpful to have more narrowly focused off-peak periods and even bigger price differentials between peak and “super off-peak” rates to strongly encourage electric use during specific times during the middle of the day. While some utilities have different TOU pricing for weekdays vs. weekends, more widespread differential pricing could also help fill the deep valleys that occur on the weekends. As shown in the South Australia example above, the lack of commercial loads over the weekend can lead to even more pronounced light load conditions in the middle of the weekend days.

New tariffs for specific technology types might also help mitigate some of the issues associated with the new load shapes. While DERs are partially responsible for the new grid challenges, they could be part of the solution as well. Incentivizing customers to charge batteries or EVs during the middle of the day or asking customers to pre-cool their homes using wi-fi thermostats before they get home from work would help to soak up excess solar production. There has been an emergence of electric vehicle TOU rates, which is a good start, but these early rates still have problems such as having broad on/off-peak periods and a reliance on metering that usually captures the impact of the whole house load and not just the EV. The rate structure of the future may need to be much more carefully defined and technology specific, with appropriate metering and telemetry requirements. Broad, one-size-fits-all rates do not properly account for what’s happening on the grid and do not take advantage of the capabilities of advanced DERs that can communicate in real time and quickly shift their energy consumption/production profiles as needed.

While not exactly a new rate structure, utilizing incentives through energy efficiency or other demand side management programs, like demand response (DR), might be a way for utilities to more surgically approach load fluctuations caused by DERs. By using a Distributed Energy Resource Management System (DERMS), utilities can control DERs in near real time; a DERMS is frequently deployed for DR programs. While TOU rates don’t offer much flexibility because they cover long time periods that may or may not align with actual grid needs or wholesale market conditions, DR programs that utilize a DERMS can send signals in near real time to take advantage of changing market and grid conditions. When there is excess solar supply, the DERMS can send a control signal to DERs to start consuming energy, potentially charging batteries and EVs, cooling homes, or heating hot water tanks. When solar production wanes and there is a steep increase in grid facing demand, the DERMS can send a signal to DERs to stop consuming energy or discharge remaining energy to the grid.

One idea is to have customers who are on certain TOU rates opt-in to programs that allow the utility to help manage their controllable devices through a DERMS platform so that the DERMS software can optimize the customer’s energy profile around the TOU rate. This would result in potential cost savings for the customer due to more consumption during off-peak hours and grid benefits for the utility. The evolving utility business model needs to find a way to offer rates that are more closely aligned with the flexibility provided by incentive-based energy efficiency programs. This may also require a regulatory reset, with Public Utility Commissions giving utilities broader latitude to change TOU rates more quickly to meet changing grid conditions.

Rate structures to date have almost exclusively either a) charged a customer for consuming electricity or b) paid a consumer for generating/exporting energy to the grid. It may be time to start considering rates that pay customers for increasing their energy consumption during certain time periods. This could be helpful when excess wind or solar production causes power prices to go negative and/or renewable resources are curtailed. Utilities would have to be made whole so any negative revenue implications from paying customers to consume energy would have to be settled by Public Utility Commissions. But this is likely a small price to pay in furtherance of critical climate-related public policy objectives. This new type of rate structure might look more like a demand response program. Demand response programs typically have incentivized customers to reduce load during targeted time periods but could be repurposed to send a signal to customers to start using electricity instead. These “reverse demand response” programs could be helpful to use abundant solar production in the middle of the day. The Pacific Gas & Electric Excess Supply Demand Response Program (XSP) that was run with Olivine is an early example of this concept. In this pilot, customers nominated at least 30 kW of load that could be ramped up for two hours, with incentives paid against a measured 10 in 10 baseline[8]. This type of pilot could be the basis for new types of rates.

The utility operational model of the future needs to be flexible to accommodate the influx of DERs that have variable generation and consumption profiles. Developing tariff structures that encourage electric consumption during light load conditions can help offset operational problems and can help reduce the need to curtail valuable renewable energy generation. Flexibility in utility operating models needs to extend to rate structures so that we can encourage more renewable generation and flexible load as we accelerate down the path towards decarbonization.

[4] Net demand trend for 4/17/2021 from CAISO, accessed from http://www.caiso.com/TodaysOutlook/Pages/index.html

At the highest level, it means we must be flexible and rethink how we define peak vs. off-peak time periods and rates.

I'm intrigued by this-- it seems like so many utilities are already struggling to implement any programs addressing time of use rates, but you're suggesting that simply doing so is already being behind, too. What's it going to take from the business/leadership of a utility to actually leap ahead to what can and should be possible with such flexibility.

Yes with Solar the Peak Time Of Day really needs to be redefined. Yet I still see many utilties showing the middle of the day as Peak. Also the amount of Peak Hours is wrong and should be changed. QUOTE=However, self-consumption of solar in certain areas of the country is causing low net demand during the middle of the day, essentially redefining the off-peak period.

Four Rules You Need to Follow to Run a Utility

Business Side of Running a Utility in 2022

How Will Utilities Adapt and Flourish?

Flexibility: Key to the success of the distributed energy transition