The latest arctic cold front is widespread and expected to reach deep into the southern United States during the coming days.  The extremely cold temperatures, combined with elevated winds, are expected to break hundreds of all-time low records.  Major power markets have been warning customers, generators, and grid operators for several days about the stress expected on the nation’s power grid.

Winter storm will bring record-breaking cold in the middle U.S. for several days

The Electric Reliability Council of Texas (ERCOT) is expecting record power demand as early as Monday morning, with the highest load expected on Tuesday morning between 7:00 am and 8:00 am CT.  The current ERCOT forecast, as of midday on Saturday (Feb 13) is for electric demand to peak at 76.9 GW – 16.7% higher than the previous winter peak of 65.9 GW set during the same hour on January 17, 2018.  The milestone, if met, will also exceed the all-time summer electricity peak demand in ERCOT which is usually the season with the highest demand. 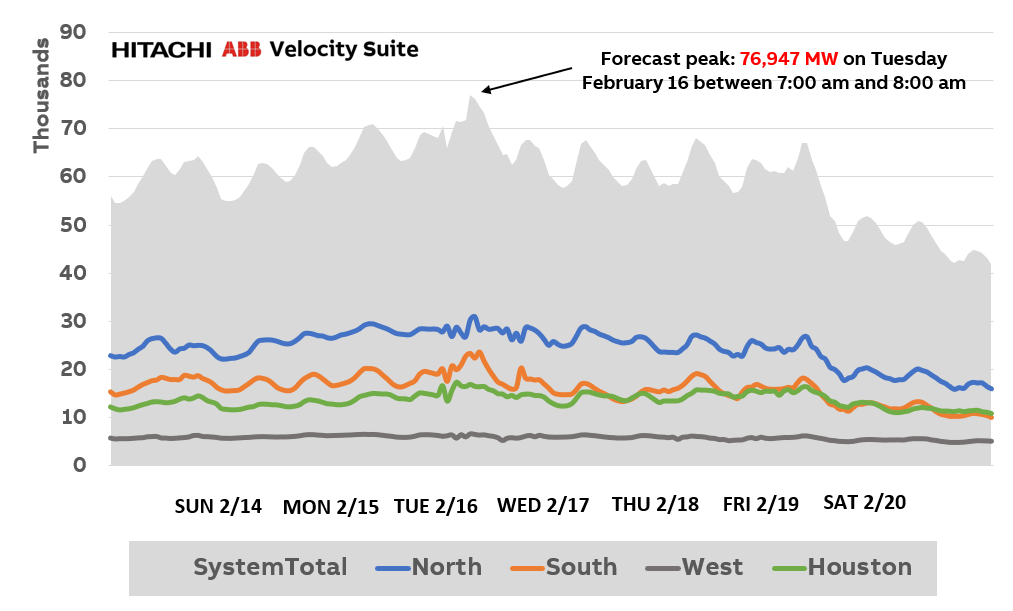 There are two big stories developing

First, the widespread bitter cold weather will impact multiple power markets at about the same time.  Secondly, the demand for natural gas for both heating and power generation will be high –the largest gas withdrawals in history are possible when the data is revealed over the next two weeks.

According to forecasts by the Weather Company, high temperatures in the Dallas/Fort Worth metropolitan area are expected to be below freezing from Sunday (Feb 14) through Thursday (Feb 18) with the high next Friday (Feb 19) reaching only 35 degrees Fahrenheit (F).  The low temperature in Dallas is expected to bottom around 1 degree F.  The last time temperatures dipped below 5 degrees F was 88 years ago. 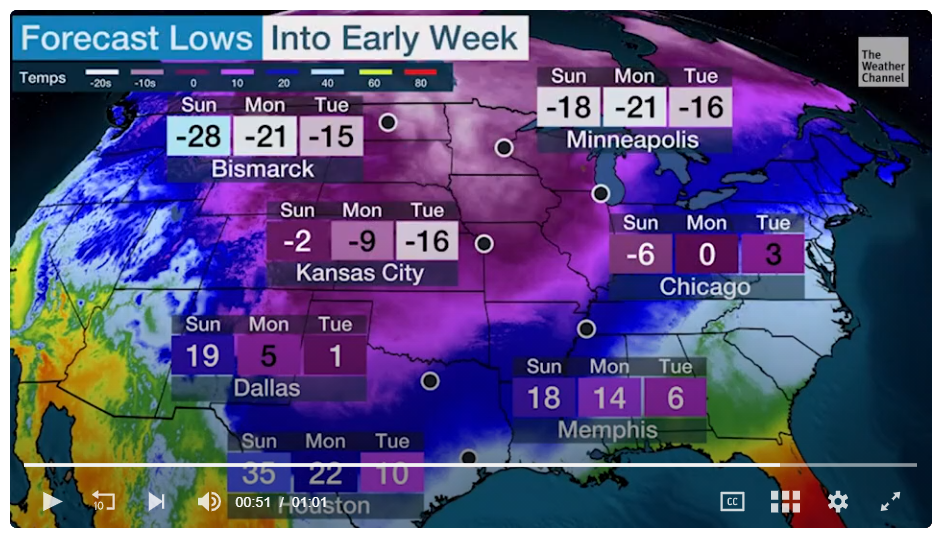 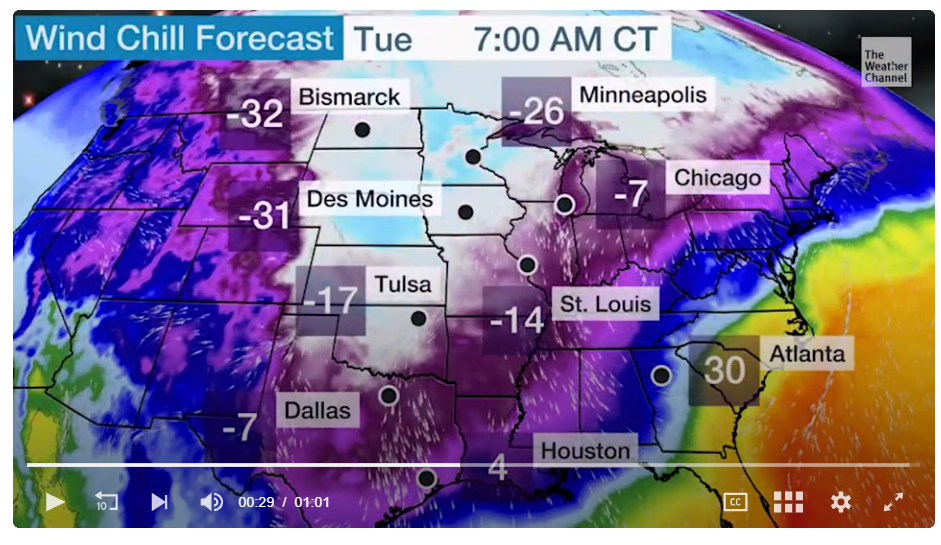 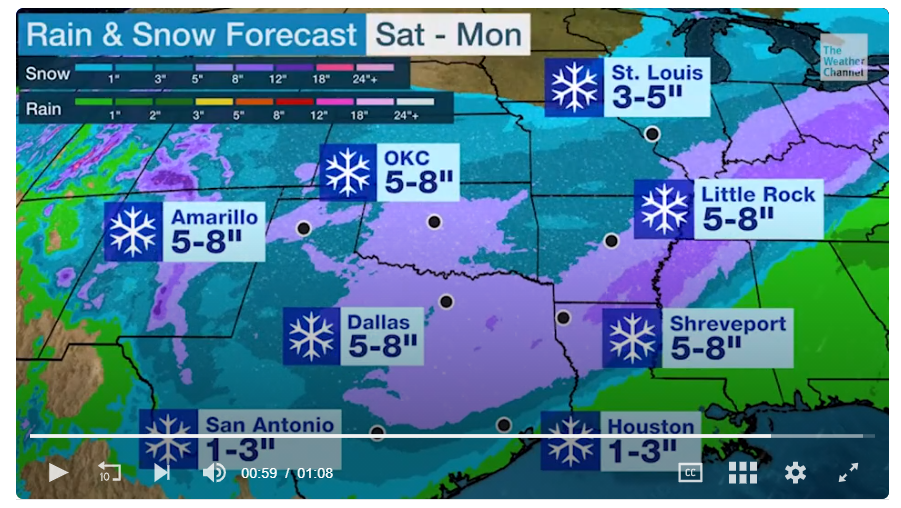 On February 13, 2021, at 8:49 PM CST, ERCOT issued an updated emergency notice for an extreme “Cold Weather Event”.  Just six minutes prior, the market issued an operations message that the Physical Responsive Capability had dipped below the 3,000 MW capacity, triggering elevated pricing signals.

Joining ERCOT, the Midcontinent Independent System Operator (MISO), posted a “Cold Weather Event” on Saturday (Feb 13) that included all of MISO Balancing Authority Areas.  The update will run from Saturday (Feb 13) through Tuesday (Feb 16), with temperatures expected to average around zero degrees F for the duration.

Additionally, on Friday (Feb 12), the largest organized power market, the PJM Interconnect, issued a “Cold Weather Alert” for the Commonwealth Edison balancing authority, and the entire western region for Sunday (Feb 14) and Monday (Feb 15) with a forecast for temperatures to fall to near 10 degrees F.

Along with ERCOT, prices have been elevated in the Southwest Power Pool (SPP), MISO, and PJM during the past few days.  They will likely get higher as the colder weather sets in over the weekend and into early next week.  By mid-week, the winter cold will reach New York and New England, sure to stress the grid in those locations as well.

Winds on the way too

Stretching from Canada to Texas, higher winds (15 to 20 mph) are expected on Sunday (Feb 14) and Monday (Feb 14) that could be a blessing for the power grid’s wind resources.  More power contribution from wind turbines could lessen the extreme demand placed on natural gas expected across the footprint.

According to the Department of Energy’s Hourly Electric Grid Monitor, U.S. electricity production from natural gas ranged from just under 150 GW to over 200 GW per hour over the four-day period from February 8-11 – the most recent reporting period.  Driven by the extreme cold expected during the next several days, natural gas-fired power generation will increase further.  The data, which is compiled from all U.S. reporting markets and power generating companies, highlights all generation resources.  Electricity production by coal fuel remained relatively flat at around 150,000 MWh per hour during the period.  With the demand for natural gas spread across both the heating and power production sectors, expect coal to fill the gap. 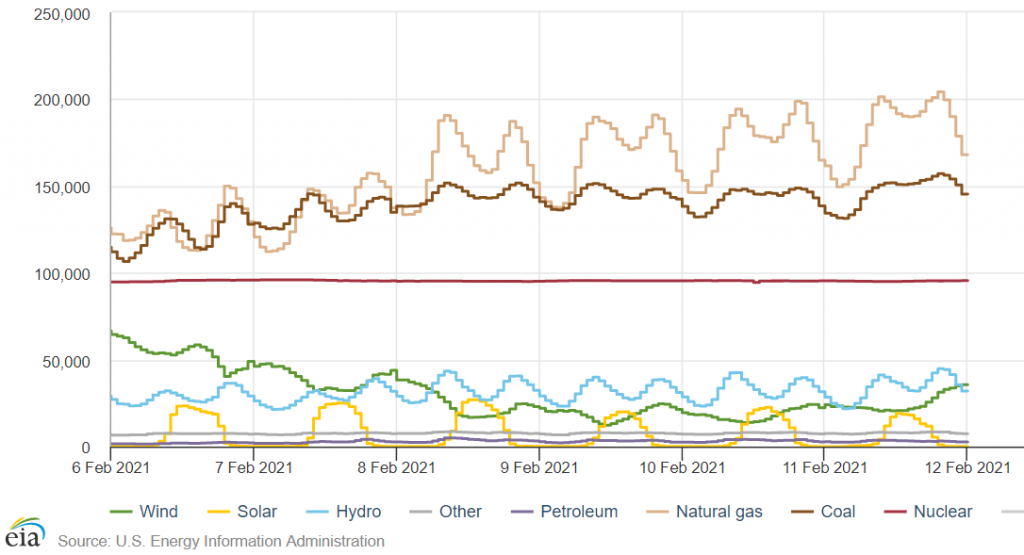 Add power outages from ice-storms to the mix

There are already several power outages across the U.S. due to ice.  At around 4:00 PM ET (Feb 13), Poweroutage.us reported more than 600,000 power outages from Oregon to North Carolina and Virginia.

In ERCOT, the most telling signal of grid stress coming out on Saturday (Feb 13), was in the Day-Ahead Market settlement prices for power delivered on Sunday (Feb 14).  The average of all hubs in ERCOT range from just over $2,000/MWh to nearly $7,000/MWh during Hour-19 on Sunday (Feb 14) night.

The arctic cold wave will test the power grid and the natural gas system over the next several days. We will be keeping an eye on this unprecedented cold weather system as it spreads across the eastern half of the U.S.

Thanks for sharing Kent-- do you think power grid strains from massive cold fronts are more challenging for grid operators than the heat waves, like those that gave CA and its grid fits in recent summers?

I guess everyone is forgetting the Polar Vortex of 2014, we are not going to come close to hitting those lows in the 2021 version.

Matt and Doug, thanks for adding comments.  Doug, I've never seen anything like this event in terms of grid stress.  The 2014 Polar Vortex was horrible but this is horrible X2 or X3 or somewhere worse . . . widespread stress and it's not over.  The politicians are now chiming in as well, which is really scary.  I've been around for years . . . not always following grid events like yourself, but I've never seen anything quite like this.  I will pull data on the 2014 vortex and this event once it's concluded  . . . I am anxious to hear how the grid operators respond . . . I image with shock and dismay.  "The Perfect Storm".  Stay tuned!