Energy markets between climate protection and price rally: a look back at the year 2021

Anyone who thought that the energy year 2021 would run rather calmly after the turbulent Corona year 2020, was taught better by September 2021 at the latest. While climate protection was the main topic in the first half of the year, the second half of the year brought record prices in almost all markets.

The certificate prices for CO 2 in the European Emissions Trading System (EU ETS) have been rising steadily since the end of 2020 . One reason was the improved economic situation after the global corona lockdowns in 2020. Furthermore, the political actors have announced that they will tighten the European climate target from 40 to 55 percent greenhouse gas emissions in 2030 compared to 1990. This announcement caused CO 2 prices to rise to almost EUR 50 / tonne in the first quarter of 2021.

The market anticipated what the EU Commission published on July 14, 2021. Specifically, it is about the "Fit for 55" package, which significantly revised the EU's climate protection efforts up to 2030 upwards. The energy and climate experts were moved by a shortage of certificates in the EU ETS, the integration of shipping traffic and the establishment of a new EU ETS for buildings and road traffic. Read our analyzes of the Fit for 55 package in detail ( Part I and Part II ). Figure 1 shows the development of the CO 2 certificate prices from the beginning of 2021 to the beginning of December 2021 (for the first time over EUR 75 / tonne). 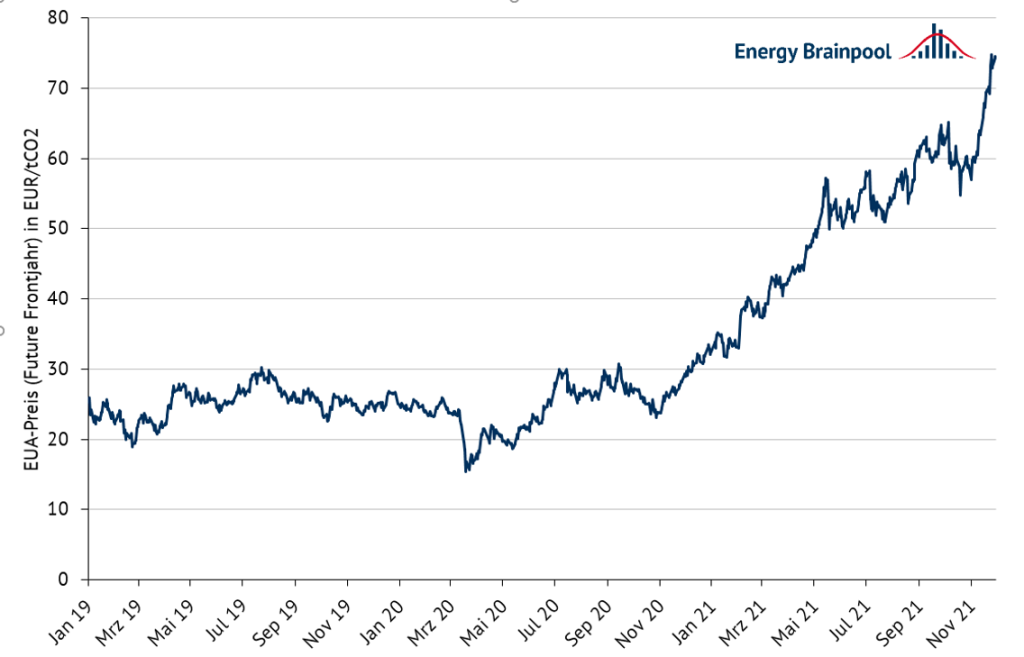 Towards the end of the year, however, long-term price expectations played less of a role in the CO 2 price due to the new climate targets. Rather, the certificate prices rose with the prices for gas and coal.

However, not only at the EU level, but also in Germany, the executive has presented more ambitious plans. In May 2021, for example, following a ruling by the Federal Constitutional Court, the grand coalition defined stronger climate protection paths for the various sectors in the new Climate Protection Act. According to our calculations , in order to achieve the target of 65 percent emissions in 2030 compared to 1990, a lot more renewables would have to be built and at the same time the coal phase-out would have to be brought forward in parts to 2030.

The economic recovery in 2021, together with cold weather, led to increasing energy consumption, especially in the first five months of the year. The Working Group on Energy Balances is forecasting a growth in primary energy consumption of just under 3 percent for the entire year 2021.

In particular, gas and coal consumption rose by 8.5 and over 20 percent, respectively, in the first nine months of the year. Last but not least, a lower supply of wind energy over the course of the year was the reason for this. The percentage changes in the various energy sources compared to the first three quarters of 2020 can be seen in Figure 2. 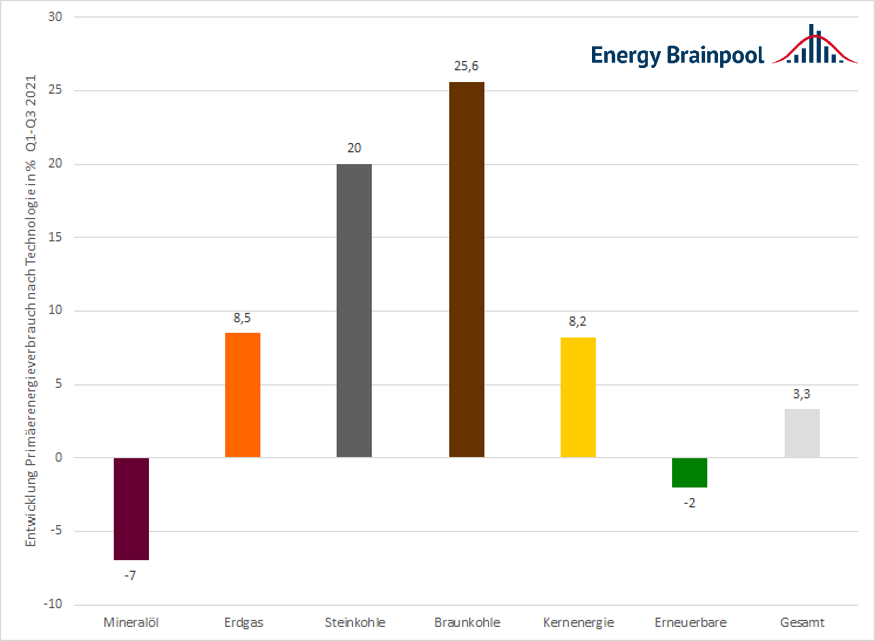 Accordingly, Germany’s energy-related emissions will increase by around 4 percent compared to 2020. However, the consumption values ​​of 2021 are still below the values ​​of the pre-Corona year 2019. Major changes for electricity generation for the next year will primarily result from the decommissioning of three nuclear power plants with an output of over 4 GW at the end of 2021.

While the prices for coal and gas on the world markets remained at a moderate level at the beginning of 2021, they then rose steadily. The decline in corona measures boosted the economy worldwide and also caused the demand for fossil raw materials to rise.

From September 2021, however, prices could no longer stop. The monthly reference price for natural gas in Europe at the TTF trading point reached over 120 EUR / MWh. Meanwhile, coal prices rose to over USD 250 / ton. Increasing demand for natural gas in Asia leads to fewer LNG deliveries for Europe, while coal prices set new records due to the high Chinese electricity and thus coal demand.

We took a closer look at the causes and developments for the excesses on the commodity markets in 2021 in two blog posts: on the one hand in the article "Trends in power generation: Backswitch from gas to coal?" And on the other hand in the article "Price rally on the energy markets" . Figure 3 shows the price trend from the beginning of 2021 to the end of November for the various commodities.

The very high-priced situation from the beginning of October 2021 calmed down somewhat by the end of the year. Nevertheless, the price movements still show high fluctuations. The extreme situation surrounding commodity prices in autumn and winter 2021 will certainly lead to extensive discussions in the coming months about security of supply, the approval of the Nord Stream 2 gas pipeline and the procurement strategies of energy providers.

The high volatility and the record prices in 2021 will keep market participants busy for some time. Procurement strategies and risk manuals are becoming more important when dealing with a constantly changing market environment. The high electricity prices are likely to give renewable PPAs a boost, as they combine reliable prices with additional green benefits. Securing long-term PPAs, but also switching between marketing models for renewable energies, should become more important in view of the high market values .

The new coalition of the SPD, Greens and FDP will launch a number of important building blocks in the coming year (source: coalition agreement ):

So it will remain exciting on the energy markets next year. We look forward to continuing to accompany and support you.

While the prices for coal and gas on the world markets remained at a moderate level at the beginning of 2021, they then rose steadily. The decline in corona measures boosted the economy worldwide and also caused the demand for fossil raw materials to rise.

We've long lived in a world where weather predictions were critical in determining energy needs, bizarre that we're well into adding 'global virus' to such factors!