There will be new record prices on the energy markets in October 2021. The EU Commission is bringing out a toolbox as a short-term reaction to the high energy and commodity prices. Another consequence of the price rally in the energy sector: There is a switch from natural gas to oil and oil products. In addition, the EEG surcharge will be reduced for 2022.

In addition to the switch from gas to coal, there is also a switch to oil

Due to the high gas prices, coal has been increasingly used to generate electricity instead of gas in recent months. However, with the rise in coal-fired power generation and difficulties in the global supply chain, the price of coal also rose. The situation on the commodity markets in some cases even led to the increasing use of oil in the energy sector and in industry instead of gas. According to the international energy agency Reuters, this has not yet happened. Because until now the efforts of the market have always been to switch from more expensive oil to cheaper gas (source: Reuters ).

One of the largest German energy suppliers, EnBW, began to burn oil instead of gas in its gas turbines at the Altbach / Deizisau thermal power station. The operation with oil was simply more economical than with gas, said the spokeswoman. Since the three turbines in Altbach are not only designed for natural gas, but also for oil operation, the change of raw materials was not a technical problem (source: Montel ).

Different handling by the energy suppliers

For a long time, there was no unanimity among energy suppliers who would have had the same technical option. While some also preferred the switch to oil, such as the Leipziger Stadtwerke, others continued to fulfill their delivery obligations by using gas.

Still others, such as the regional suppliers in Duisburg and Jena, have long since cut back the possibility of burning oil with a view to protecting the climate (source: Montel ). Economically, the switch may have been cheaper, but it certainly wasn't for the CO 2 balance. The emission factor of heavy heating oil with 79.4 kg CO 2 / TJ or other petroleum products with 80.102 kg CO 2 / TJ is significantly higher than that of natural gas with 55.75 kg CO2 / TJ (source: Federal Environment Agency ).

Nevertheless, the switch to heating oil was noticeable in industry as well as in the energy sector. According to this, some forecasts have increased their forecast of global oil consumption by several hundred thousand barrels per day (bpd) (source: Reuters ). Saudi Arabia's energy minister forecast one around 500,000–600. 000 bpd of increased demand from the switch. (Source: Reuters ) According to ITHS Markit, the substitution of gas by oil will be small in Europe due to climate change efforts, while it will be much more visible in Asia (Source: IHS Markit ).

The following graphic shows the steadily increasing demand for oil in 2021 with a forecast for 2022. As a result of this and the generally high prices on the energy market, oil prices also rose in the third quarter of 2021. They rose relatively sharply after OPEC + announced that it would not increase its production for the next few months by only 0.4 m bbl / day per month, despite constant requests from other countries. Despite efforts by the USA and Japan to increase global production, the situation on the oil market remains tense (sources: Montel ). 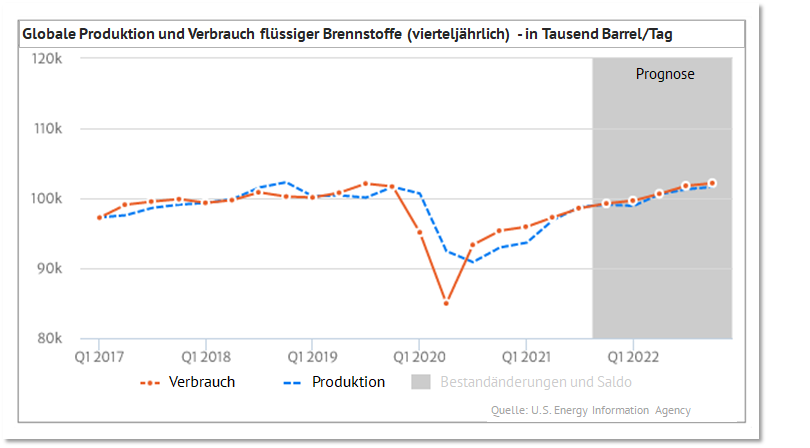 On October 15, 2021, the transmission system operators announced the amount of the EEG surcharge for the coming year 2022. From January 2022, this is to decrease from 6.5 ct / kWh to 3.723 ct / kWh. This corresponds to a reduction of almost 43 percent. As can be seen in Figure 2, the levy has reached the lowest level in the last ten years (source: BMWi ). 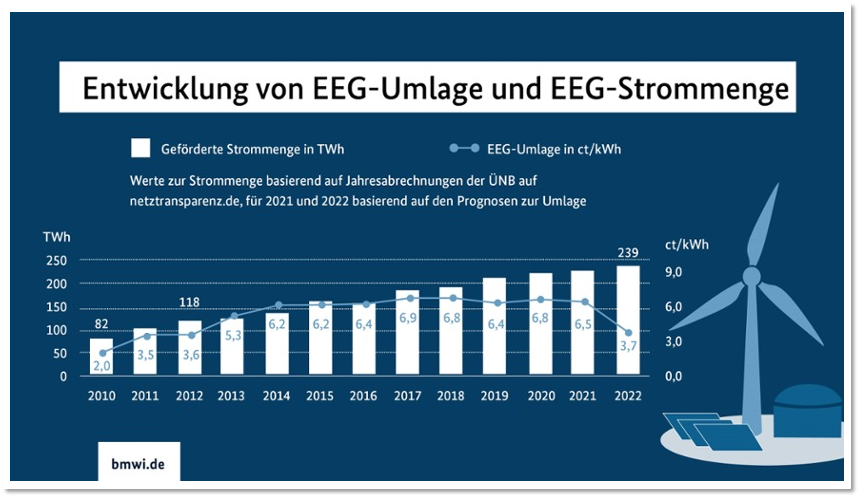 Actually last year there was talk of a reduction of only 7.7 percent for the year 2022 to 6 ct / kWh. At the time, however, that number was set on the basis of a negative pay-as-you-go account and no prospect of recovery. Now, after a total of three grants from the federal budget, the levy account is at its highest level of EUR 8 billion in 2021. The grants were partly financed from the income from the national CO 2 pricing, mainly borne by the taxpayers.

In 2021, the grants amounted to exactly EUR 10.8 billion. In addition to the current high EEG account balance, the high electricity prices of the last few months have also contributed to this. The difference between market revenues and the amount of funding from renewable energies, which makes up the EEG surcharge, was very small due to the high market values ​​and thus less burdened the EEG account.

In any case, federal subsidies of EUR 3.25 billion are planned for next year. These should contribute to a reduction of 0.934 ct / kWh (source: Montel ). However, many voices are now rising to completely abolish the r EEG surcharge. It has long been seen as a source of high electricity costs. Even the Federal Minister of Economics Peter Altmaier (CDU) said this should be reduced to zero in the future. The current reduction alone contributes to a price reduction of 11 percent in relation to the current average, high electricity price of 31.38 ct / kWh (as of October 2021).

On October 13, 2021, EU Energy Commissioner Kadri Simson presented a “toolbox” to the EU Commission. This contains various instruments that states can use to counteract the effects of steadily rising energy prices. It contains many different short and medium-term measures, such as relieving the burden on households and small businesses. This could be financed from the income from the emissions trading system. Due to the sharp rise in certificate prices, EUR 2.4 billion could already be collected in the first half of the year. It is conceivable that the record of EUR 3.2 billion from 2019 will probably be exceeded by the end of the year (source: Montel ).

Figure 3 contains some suggestions from the Toolbox. This includes, for example, taking precautions to prevent household energy from being switched off or approving a temporary deferment of payments. Another short-term measure is tax relief (reduction or total exemption) to relieve consumers. However, the responsible EU politicians emphasize that the measures should only be applied temporarily. 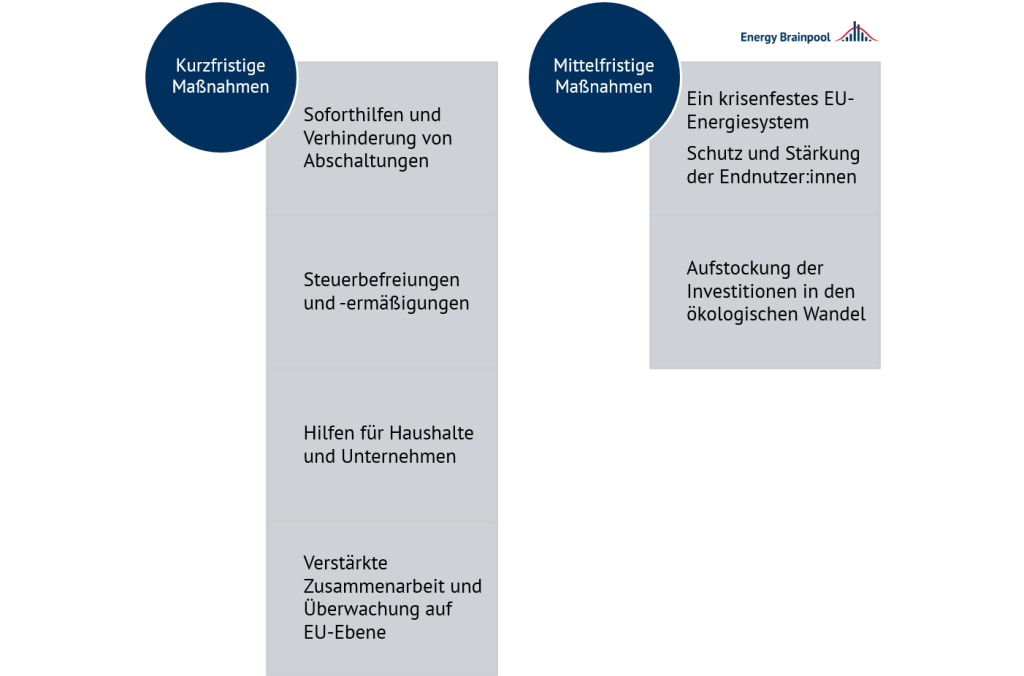 Increased cooperation in the gas market is proposed as a medium-term measure. It is to be examined whether joint storage of strategic gas reserves is possible. In addition, the EU Commission has commissioned a study, the aim of which is to provide a more detailed look at the European electricity market.

Results could be incorporated into the legislative proposal as early as December. In addition, according to the Toolbox, the member states should invest more in renewable energies, building renovation and energy efficiency and accelerate the auctions and approval procedures for renewable energies (sources: Zeit , European Commission ).

Despite the current high commodity prices, the Scandinavian countries as well as Germany and the Benelux countries refused to intervene in the energy markets or the European emissions trading system. Nevertheless, all EU countries agreed to support low-income households (source: Montel ).

On October 6, 2021, the front year electricity contract rose for a few hours to an all-time high of EUR 179 / MWh. The month ahead also shot up to EUR 350 / MWh, but then fell again. The high prices can be attributed to an increase in the spark spread, which is currently decisive for futures contracts due to the price-setting gas power plants.

At the end of October gas prices stabilized due to the easing of the gas shortage. One of the reasons for this was that China released its own quantities of LNG for other markets through higher coal production. In addition, Vladimir Putin has announced that Gazprom will increase gas deliveries from November 8, 2021.

The filling level of the German gas storage facility is currently 71 percent, whereas last year the filling level at this time was 94 percent. The European storage tank is 77 percent full (by comparison: level at 94 percent in 2020). The low filling levels are another reason for the consistently high gas prices and a 12 percent increase in gas demand compared to 2020. (Sources: Montel ).

The share of solar power generation set a new record of 3.6 TWh in October 2021 and was thus 50 percent above the previous year's value. In addition, the new high is also due to the 400 MW newly installed photovoltaic capacity in October.

A further 13.3 TWh were generated by wind power. At 16.9 TWh, the contribution of wind and solar generation was higher than that of hard coal, lignite and gas combined (16.4 TWh). Overall, the average share of all renewables in net electricity generation was 50.3 percent in October and thus slightly above the annual average for this year (source: Montel ).

In the short-term markets, the EUA contract fell to a two-month low of EUR 54 / t. Shortly afterwards it climbed to an intraday high of EUR 60 / t. The low prices were caused, among other things, by the discussion about possible market intervention by the EU to limit energy prices (source: Montel ). 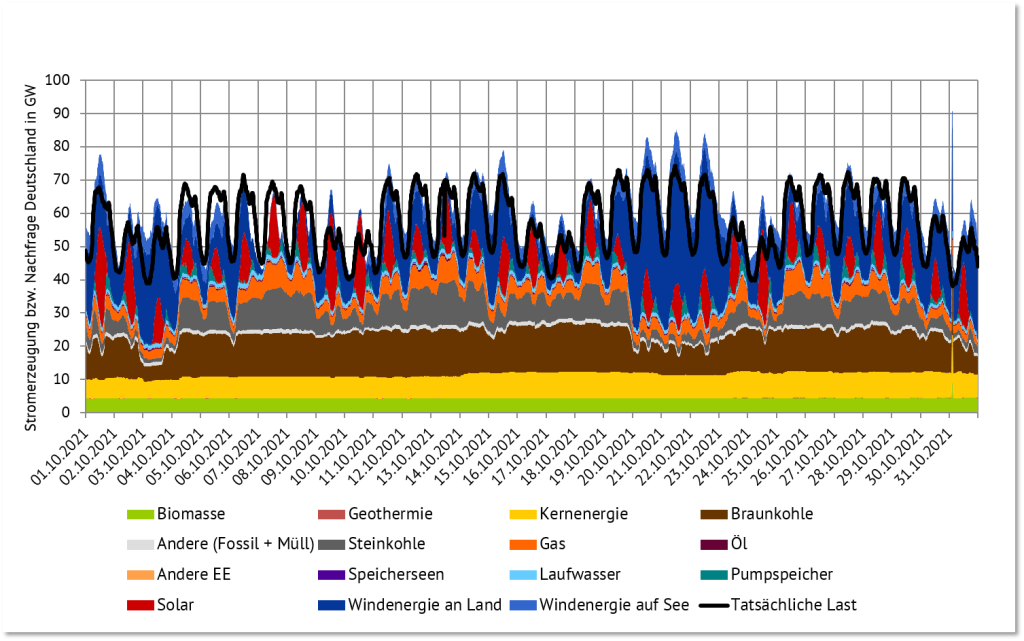 That is a strange situation. I can't imagine they would just go with anything that is cheaper at the moment. It doesn't show any planning. If they really want the lowest cost I would thing they would put in a large amount of Solar PV and Wind. Have they looked at Geo-Thermal. What about improving any hydro resources they have. Adding large Mega battery storage can help and even eliminate the need for Peaker Plants that are normally NG or Oil.  There have to be many other choices in their area.