The energy markets remain in turmoil because of the ongoing Russia-Ukraine war. Besides that, the short-term and futures markets continue to react to new developments with price fluctuations. With the REPower package, the EU is outlining a path to independence from Russian fossil fuels towards the accelerated expansion of renewable energy sources. In addition, the Federal Network Agency has announced the results of the tenders for second segment solar plants and the innovation tender.

Due to the ongoing war between Russia and Ukraine, the energy policy situation remains tense in the EU. After a long discussion, the European Commission has agreed in a sixth sanctions package to stop the import of Russian crude oil. However, this initially applies to transports by ship. This means that transport by pipeline is still permitted. Overall, 90 percent of oil imports from Russia to the EU are thus affected.

Hungary in particular had opposed a complete embargo. The Eastern European country also drew attention to the country’s lack of access to the sea (source: energate-messenger). Robert Habeck (Greens), Federal Minister for Economic Affairs and Climate Action, criticised the fact that the oil embargo had only been partially imposed and pointed out that Germany would like to completely renounce Russian oil deliveries after the end of the year (source: energate-messenger).

After Poland, Bulgaria and Finland had rejected the two-stage payment procedure for gas, the Netherlands and Denmark have now joined them. Consequently, Gazprom cut the gas supply to these countries. However, German Chancellor Olaf Scholz, along with other EU states, made it clear that a gas embargo is not currently under discussion.

A halt to Russian gas deliveries would also have particularly serious consequences for energy-intensive industrial companies in Germany (source: energate-messenger). The yellow line in Figure 1 illustrates the relatively constant import of natural gas from Russia via the Nord Stream 1 pipeline.

Only shortly after the start of the war did deliveries decline somewhat until they returned to pre-war levels. Furthermore, the EU Commission has emphasised that only minor interventions will be made in the gas market to prevent market distortions. Spain has already decided on a price cap of 40 euros/MWh for gas and if necessary, other states will follow suit (source: energate-messenger). 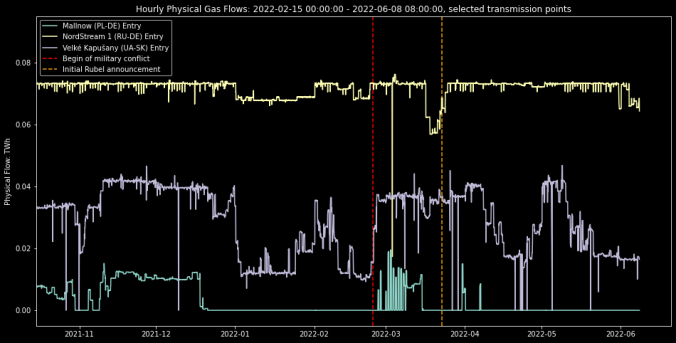 Repower EU package: How the EU wants to become independent from Russia

On 18 May 2022, the European Commission presented the “REPower EU” package of measures. On the one hand, this is intended to reduce the EU’s dependence on Russian energy imports and, on the other, to support the energy transition. A total of 300 billion euros is planned for this project. The Corona Reconstruction Fund will provide financing and 20 billion euros are to come from the sale of CO2 certificates. Members of the EU Parliament have to negotiate the outlined measures before they can be implemented (source: energate-messenger).

In addition, the goal is to increase the share of renewable energies in the EU’s final energy consumption by 5 percent to 45 percent by 2030. To this end, an acceleration of the expansion paths of renewable energy sources is planned. In addition, purchases of liquefied petroleum gas, pipeline gas and hydrogen from other countries are intended (source: RGC Manager). In addition to importing 10 million tonnes of green hydrogen, the EU Commission has set itself the goal of producing the same amount within the EU by 2030.

At the beginning of April 2022, tenders for solar plants of the second segment took place. Accordingly, ground-mounted systems and solar systems on built structures with an installed capacity of at least 301 to a maximum of 750 kWp were eligible to participate. The bid volume may not be less than 100 kW (source: Federal Network Agency). 171 bids with a volume of 212 MW were received.

With a tendered volume of 767 MW, this bidding round was clearly undersubscribed. This is because last December the BNetzA (Federal Net Agency) had raised the tendered volume significantly from the originally planned 150 MW. Average surcharge price increased by 11 euros to 85.30 EUR/MWh (source: Federal Network Agency).

Figure 2 shows the development of the tendered quantity, the submitted quantity and the surcharge of the past tenders for second-segment solar installations. 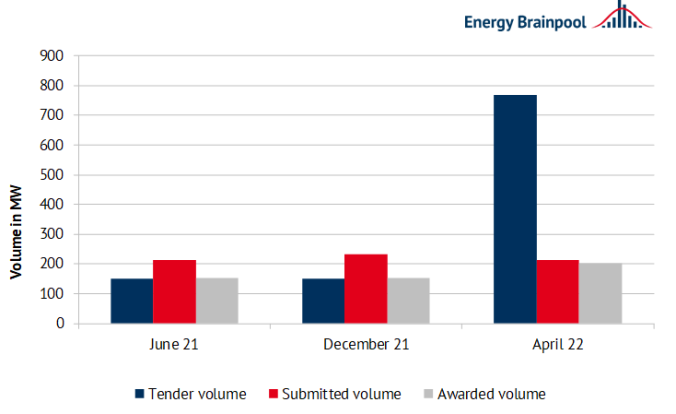 The innovation tenders, on the other hand, were slightly oversubscribed. A total volume of just under 400 MW was tendered and 435 MW were bid. Seven bids were excluded due to formal errors. Only combinations of plants can participate in the tender, i.e. renewable energy plants with at least two different generation technologies. As in previous rounds, only bids for solar-storage combinations were submitted. For the first time, bids for special plants could be submitted. Special plants allow dual use of land such as water bodies, agricultural use and car parks. These are prioritised in the award procedure.

The average volume-weighted award value in this bidding round was 5.42 ct/kWh, higher than last time at 4.55 ct/kWh. The bid values that were awarded ranged between 3.95 and 7.43 ct/kWh.

Two bidding rounds are held each year. The next round will take place on 1 August (source: Federal Network Agency). 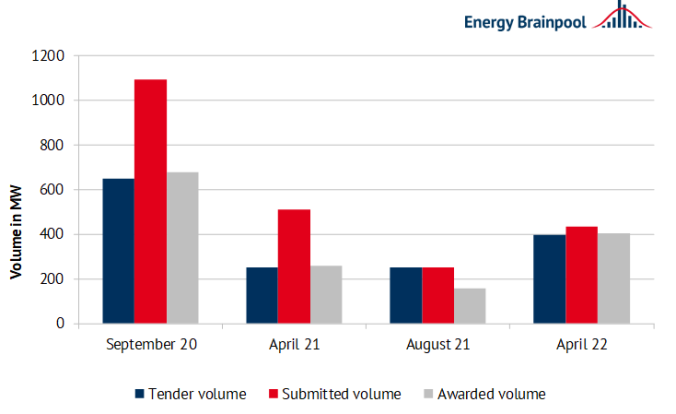 The high price level that has prevailed for some time continues. Strong price movements can be observed throughout the month. At the end of the month, the gas and power markets as well as the CO2 market recovered.

The decision of the European heads of state to impose a partial embargo on Russia is causing the oil price to rise. The fluctuations in the gas price are also due to news of the Russia-Ukraine conflict. Over the month, the gas price shows more of a sideways movement (source: Montel).

The electricity front year reached two all-time highs in May. Due to rising CO2, coal and gas prices, the Cal 23 cracked the EUR 240/MWh mark. Before that, it reached 236 EUR/MWh on 19 May (source: energate-messenger). In between, the front year CO2 price fell. This fell because the EU Commission plans to sell 250 million EUAs from the market stability reserve to finance the energy embargo against Russia. The EUA contract fell to 80.16 EUR/t CO2 (source: Montel).

The percentage price development of the commodities can be seen in Figure 4.

Day-ahead gas on the EEX fell to 78.99 EUR/MWh in May due to high gas storage levels and high LNG imports. Thus to the lowest level in three months. At the beginning of the Russia-Ukraine war, the gas price became more expensive and was as high as 233 EUR/MWh. Due to further payment conflicts between the Danish Orsted and the Dutch GasTerra and Gazprom, the day-ahead prices have risen again (source: energate-messenger).

Figure 5 shows electricity generation and consumption in May 2022.

Figure 5: Electricity generation and consumption in May 2022 in Germany (source: Energy-Charts, 2022)