The German Minister of Economy and Climate Protection Habeck has declared the second of three warning levels of the Emergency Gas Plan. Besides that, the EU Parliament agreed on a reform of emissions trading. Finally yet importantly, the tenders for onshore wind turbines were unsubscribed for the first time in three bidding rounds. A bullish mood prevails on the short-term markets as well as on the futures markets.

Since 15 June, Russia has cut gas supplies via the Nord Stream 1 pipeline by 60 percent.

In view of low gas flows from Russia, the Minister of Economics and Climate Protection, Robert Habeck (Greens), has declared the second warning level in the Gas Emergency Plan. This replaces the early warning stage that has been in place so far. In detail, it means that the market can continue to maintain supply independently. But the federal government is authorised to intervene in the market with measures (source: IamExpat).

For instance, the German gas market area operator Trading Hub Europe (THE) was given 15 billion euros to procure gas. These have the objective of filling 80 percent of the natural gas storage facilities by October and 90 percent by November. In general, the Federal Network Agency is responsible for checking whether the storage targets are met in order to step in if necessary.  If Nord Stream 1 remains at the current low level, it will not be possible to meet the storage level targets. It is also unclear whether Gazprom will resume operation of Nord Stream 1 after maintenance in July (source: Euronews)

In order to secure the energy supply and become less dependent on Russian energy supplies, coal-fired power plants that were taken off the grid in October this year have now been asked to continue operating (source: Montel). Furthermore, LNG imports to Europe and Turkey have grown by a third. On average, 2.3 bcm of LNG was imported per week in June (source: Montel).

After long discussions, the EU Parliament has agreed on a reform for emissions trading. The amendment specifies that the annual CO2 reduction path should be raised to 4.2 percent. The current reduction factor is at 2.2 percent. Additionally, the draft states that a one-time withdrawal of 117 million certificates from emissions trading will be made in order to create incentives for CO2-reducing measures. The aim is to reduce CO2 emissions from industry by 63 percent in 2030 compared to 2005. This means that the target has been raised by two percent (source: Montel).

Furthermore, the new regulations include the introduction of a CO2 border adjustment mechanism for imports into the EU (CBAM) and the establishment of an EU climate fund. The CBAM prevents the relocation of manufacturing or the import of CO₂-intensive products. From 2027, the CBAM will initially apply to cement, iron and steel, aluminium, fertilisers and electricity until 2032, when it will be extended to other goods. From this year, the free emission certificates for industry will also expire (source: energate-messenger).

Despite the high CO2 prices, greenhouse gas emissions in Germany increased by 4.5 percent in 2021 compared to the previous year.  This is largely due to the economic recovery after the COVID 19 pandemic. According to the Federal Environment Agency, there was also a low level of wind energy feed-in. Besides that, the increase in the price of natural gas led to more and more hard coal and lignite-fired power plants being used to generate electricity (source: energate-messenger). The development of greenhouse gases since 1990 is shown in Figure 1. 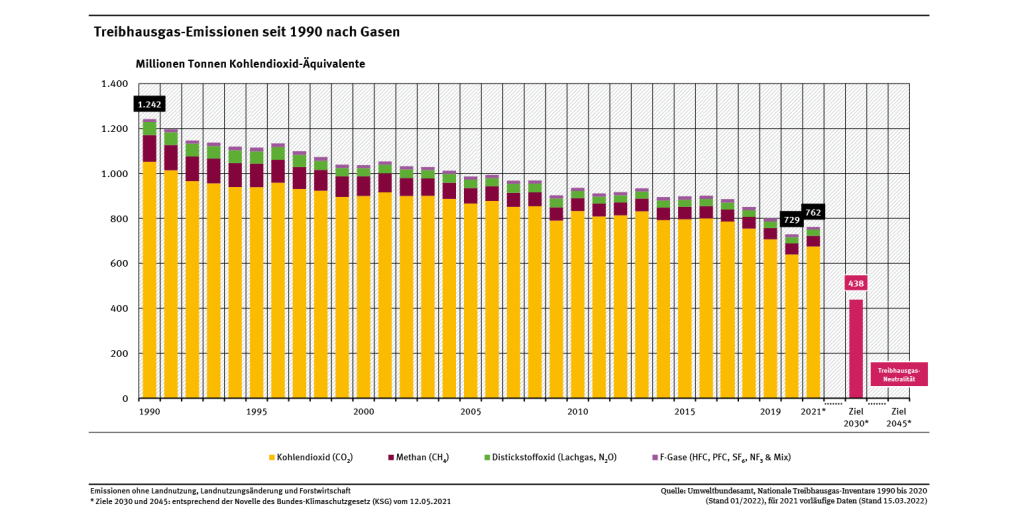 Figure 1: development of greenhouse gas emissions since 1990 by gas (Source: Federal Environment Agency, only in German)

In June 2022, the Federal Network Agency (BNetzA) published the results of the tender for onshore wind turbines on 1 May. In the process, 114 bids for just under 931 MW were awarded for the tendered quantity of 1.3 GW. After two oversubscribed rounds, the tender was only undersubscribed by 28 percent of the tendered quantity. The last tender round in February of this year, on the other hand, was slightly oversubscribed with 147 bids submitted. The tender volumes, as well as the submitted volumes of all tenders for onshore wind, can be seen in Figure 2. 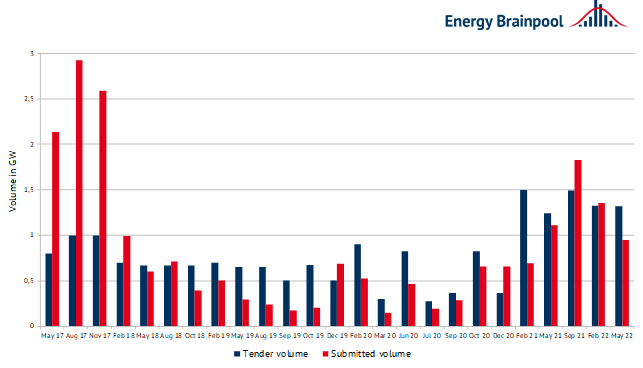 The average, volume-weighted award value in this tender round was 5.85 ct/kWh, with the highest bid value being 5.88 ct/kWh and the lowest bid value being 5.44 ct/kWh (source: Bundesnetzagentur). Compared to the bidding round in February with 5.76 ct/kWh, the average, volume-weighted award value has increased. The most awards were made to projects from Schleswig-Holstein (224 MW), Nordrhein-Westfalen (198 MW) and Niedersachsen (178 MW).

This year, the BNetzA would like to tender 4 GW. In addition to the three planned tender rounds, a further round is to take place in December. Currently, almost 60 GW of onshore wind capacity is installed and the federal government would like to double capacity by 2030, using tenders among other methods, in order to achieve the target of 80 percent renewable energies (source: Montel).

The strongly growing gas price is supported by the low gas flows via Nord Stream 1 and the fear of a supply stop. As a result, the gas price is currently at three times the level of a year ago.

Over the month, the price of electricity has increased, driven mainly by high gas prices. After the German Federal Minister for Economic Affairs and Energy, Robert Habeck, declared the second warning level for gas, the Cal 23 has risen to a record high of 262 EUR/MWh (source: Montel). Due to low trading liquidity and fears of a supply shortage, it reached a new all-time high of 282 EUR/MWh shortly afterwards. The short decline towards the middle of the month is due to the fact that the German government presented the plan for the market integration of coal-fired power plants at that time (source: energate-messenger).

Thus, power plants that were in reserve will be reconnected to the grid in the near future. This in turn boosted coal prices, which grew by 12 percent over the month. The price increase on the gas market also supported CO2 quotations and the coal price. Coal storage stocks at North West European terminals are at a 2.5 year high due to fears of not having enough gas available in the future (source: Montel). Concerns about gas storage levels continue to drive prices on the futures markets.

Lots of sun and little wind

The share of renewable energy in June 2022 averaged 49.8 per cent; lower than in the previous two months, but slightly higher compared to the previous year (46.2 per cent). There was low wind feed-in over the month, so wind energy was at its lowest level since a year ago at 5.2 TWh in June (source: Energy-Charts). Solar feed-in, at 7.8 TWh, was on its seasonal averages. The high prices on the short-term markets were supported by the low wind feed-in.

Figure 4: electricity generation and consumption in May 2022 in Germany (source: Energy-Charts, 2022)