The immediate climate protection program was adopted at the end of June, albeit less ambitiously than expected. Further topics in June 2021 are the results of the first wind tender since 2017 with more than 1000 MW of allocated capacity and the lower share of renewables in the first quarter of 2021. The prices on the futures market reach new highs.

On June 23, the Federal Government adopted the “immediate climate protection program 2022”. The reason for this program was the EU's new emission reduction targets and the new Climate Protection Act , which require more measures. With the program, the federal government is pursuing the goal of making Germany a pioneer in climate protection, for which funds of around EUR 8 billion have now been earmarked for financing (source: Federal Ministry of Finance ).

The immediate climate protection program contains a large number of sectoral measures that include the sectors of energy, industry, buildings, transport, agriculture, land use as well as overarching measures. Figure 1 shows a summary of the measures adopted. The introduction of a nationwide photovoltaic requirement for new buildings and major roof renovations , which was included in the draft of the program, was not decided on June 23. 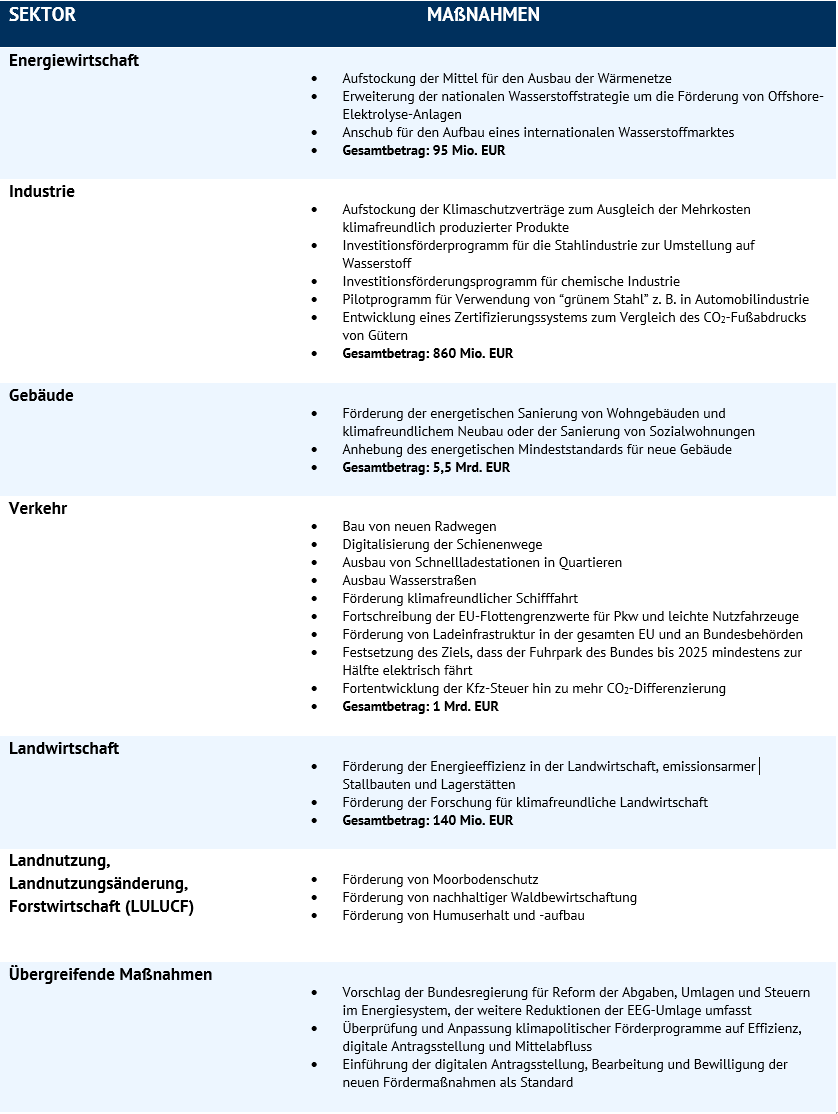 The results of the tender for onshore wind from May 1st were published in June. For the tendered amount of 1,243 MW, 127 bids for a total of 1,110 MW were accepted. The tender was signed with only 89.3 percent of the tendered volume, even though the tendered volume was recently reduced from 1,500 MW to 1,243 MW due to the threat of signing (source: Montel ). For the last round of tenders in February for 1,500 MW, only offers for 718 MW were submitted. This can also be seen in Figure 2. 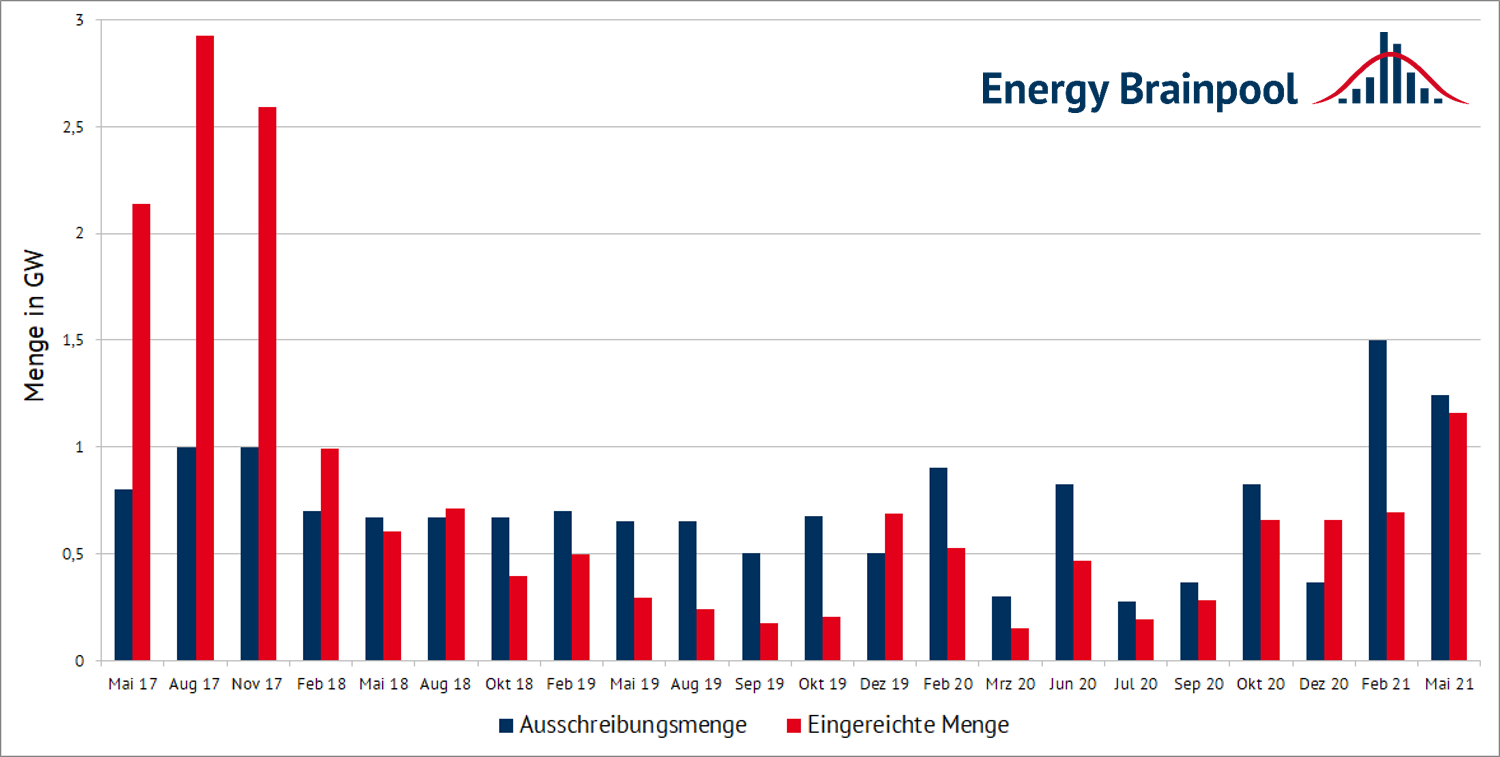 For the first time since 2017, more than 1000 MW of capacity was allocated again in May. The average, volume-weighted award value in this tendering round was 5.91 ct / kWh, with the highest bid value 6.00 ct / kWh and the lowest bid value 5.68 ct / kWh (source: Federal Network Agency ). Most of the contracts were awarded to projects from Schleswig-Holstein (295 MW) and Lower Saxony (263 MW).

Despite the positive development in the quantities submitted, there was also another side of the coin in this tendering round. 43 of the successful bids were awarded for the first time in February 2018. Since the projects were not built according to their deadline, the corresponding surcharges expired on March 1st of this year. Of course, this fact has an adverse effect on the previous wind power expansion - financially, however, the investors in the projects, who were able to participate again in the May tender (source: Montel ).

In the first quarter of 2021, renewables delivered a total of 21 percent less electricity than in the same quarter of the previous year. This emerges from a report by AGEB . The main reason for this was the low amount of wind power being fed into the grid.

The generation of electricity from wind energy was 35 percent (onshore) and 17 percent (offshore) lower than in the same period of the previous year. Despite stable PV feed-in, this resulted in a significantly higher proportion of fossil fuels in the energy supply compared to 2020. This can also be seen in Figure 3 (data source: AGEB ). 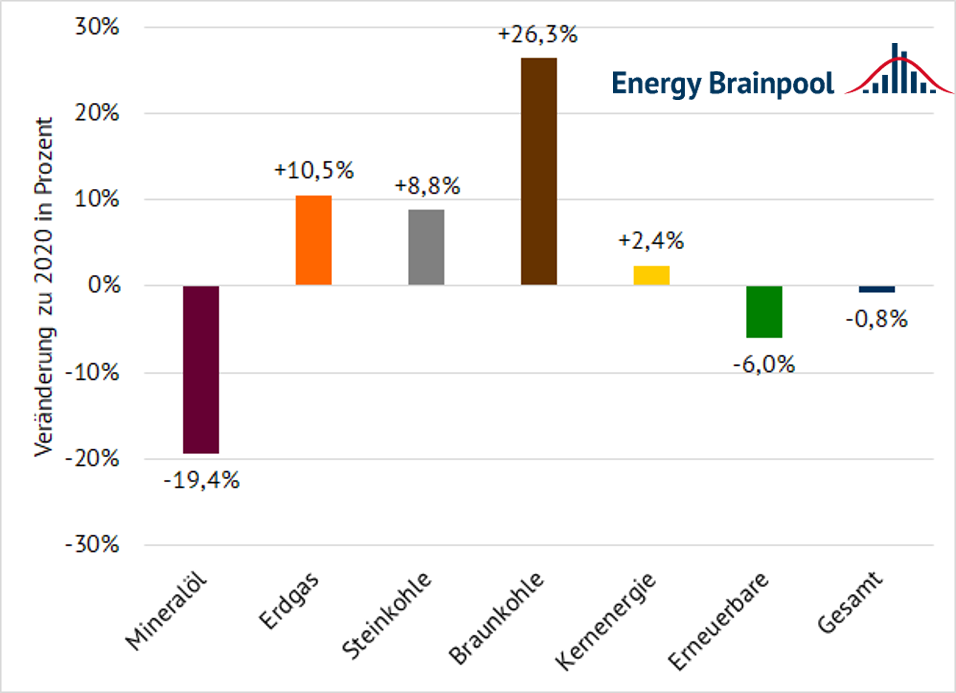 Figure 3: Change in electricity generation in Q1 2021 compared to the same period of the previous year by energy source in percent (source: Energy Brainpool).

The use of lignite rose by 26.3 percent and the consumption of hard coal by 8.8 percent. There was also an increase of 10.5 percent in natural gas in the first quarter of 2021. In the consumption of natural gas - in addition to the low feed-in of renewables - the above-average cold temperatures and the associated increase in demand for heat also played a role. Mineral oil saw a 19.4 percent decline in the first three months of the year. The AGEB cites the restricted air traffic due to the corona pandemic as the reason for this. The increased use of fossil fuels caused CO 2 emissions in the energy sector to rise (source: pv-magazine ).

The PV supplied a similar amount of electricity as in 2020, so that the 6.0 percent decline in renewable feed-in can be entirely attributed to the decline in wind energy.

Overall, primary energy consumption fell by 0.8 percent in the first quarter of 2021 compared to the previous year. The main reason for this was the 3.4 percent lower economic output in Germany due to the corona pandemic and the higher energy costs due to rising CO 2 prices (source: pv-magazine ).

New records on the futures market

In June there were bullish signals for all commodities, which drove electricity prices up significantly. On June 29, the power front year for Germany even reached its 13-year high of EUR 71.20 / MWh. The rise in prices was primarily driven by rising CO 2 prices, which again approached EUR 56 / t at the end of the month (source: Montel ). The percentage price development of the commodities can be seen in Figure 4.

The front year gas also rose significantly in the course of the month and at the end of the month showed an increase of 32 percent (source: Montel ) compared to the beginning of May. As a result, gas was also a price driver on the energy market in June. The reason for this: high demand and low storage levels due to the cold temperatures in recent months (source: Montel ).

Coal also reached record highs again. The front month showed a 10-year high of 122 USD / t at the end of June, driven by the hot temperatures in Asia and the associated need for cooling and low inventories (source: Montel ).

Lots of sun and little wind on the spot market