Energy markets remain in turmoil in July 2022 due to the ongoing Russia-Ukraine war, with prices in the short-term and futures markets fluctuating as a result of new developments. Energy company Gazprom cuts supplies by half. To reduce Germany’s dependence on Russian gas, there are plans to bring back hard coal and oil-fired power plants that are waiting in the grid reserve. The Bundestag initiated a new amendment to the Renewable Energy Sources Act, where the expansion targets for renewable energies were raised.

Planned maintenance work on Nord Stream 1 started on 11th July , for which ten days were scheduled. During the maintenance work, gas flows have been reduced to zero. And already four weeks before the planned maintenance, capacity was throttled to 40 percent. The red line in Figure 1 illustrates the import of natural gas from Russia via the Nord Stream 1 pipeline. Russia justified the reduction by referring to a broken gas turbine that needed to be repaired in Canada. It was not returned for weeks because of sanction. In the end, Canada granted an exemption.

During the maintenance work, many market participants feared that Russia would suspend gas flows altogether. This drove up prices on the forward and short-term markets. Read more about this topic in the next sections (source: CNBC).

At the end of July, Russian utility Gazprom again threatened further curtailments. As of 27th July , capacity is to be cut to 33 million cubic meters/day for an unforeseeable period of time if another turbine under repair in Canada is not restored in time. That is about half the maximum capacity. Economics and Climate Minister Robert Habeck (The Greens) criticizes that the throttling is not due to technical problems, but that the action is politically motivated. He also emphasizes that gas consumption in Germany and Europe must be reduced. This is necessary to find a way out of the energy crisis (source: Newsrnd). 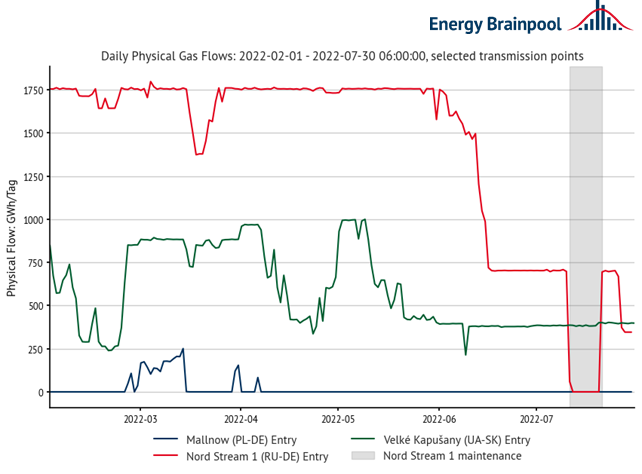 On 13 July, 2022, the German government issued a directive permitting nearly 6 GW of grid reserve power plants to return to the electricity market. This decision will initially apply until April 2023 and includes power plants that are already in reserve. And, among others, 2.1 GW of hard coal-fired power plants that should have left the electricity market this year. The regulation plans to save gas in the summer in order to further increase reserves for the winter. In total, 5-10 TWh are to be saved in Germany this winter. The fuel is to be used in particular for district heating and in industry.

If more gas has to be saved than planned because it is foreseeable that the market participation of hard coal and oil-fired power plants will not be sufficient, then the lignite supply reserve should also participate in the electricity market. Robert Habeck (Greens) had already announced that he wanted to do this even before the highest alert level of the gas emergency plan had been declared (source: Clean Energy Wire).

Chancellor Olaf Scholz (SPD) emphasized that the return of fossil-fuel power plants was a temporary emergency measure and thus only of a short-lived nature (source: energate-messenger). At the same time, the Bundestag decided to increase wind and solar expansion to 360 GW for 2030. This would triple the currently installed capacity of 117 MW (source: euronews).

The measures in the amendment support the goal of achieving greenhouse gas neutrality in 2045. First and foremost, more ambitious expansion targets for renewable energies were adopted. In 2030, 80 percent of electricity will come from renewable energy sources. To further strengthen the expansion, the tender volumes for PV and wind will be increased. Particulary, the law increases the tender volume for ground-mounted systems (source: Euractive)

Also, tenders for plants producing electricity from green hydrogen have been added to the EEG. In 2023, for example, subsidies for 800 MW of capacity for the reconversion of green hydrogen into electricity are to be auctioned. In each of the following years, the tender volume will increase by 200 MW.

Additionally, so-called full feed-in plants will receive more compensation. These are plants that feed all their electricity into the public grid. In addition surplus electricity from new self-consumption plants will also receive significantly better compensation. The compensation rates will not apply from 2023, but from the date of publication in the Federal Gazette. Figure 2 illustrates the increase in compensation rates. The EEG levy, which had already been reduced to zero, has now been finally abolished. The changes come into force at different times, but at the latest on 1 January 2023 (source: Bundesrat). 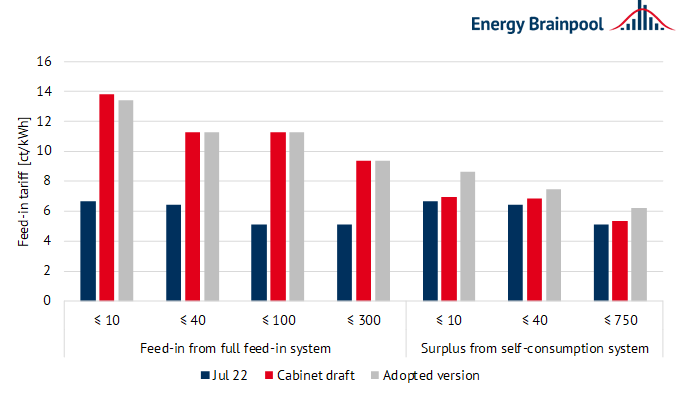 The Nord Stream 1 gas supply continues to keep the futures market on tension. At the beginning of the month, Russia continued to curb gas flows through Nord Stream 1. And the subsequent ten days of maintenance work contributed to a sharp rise in the price of gas. On the 15th July, gas prices fell with the return of Norwegian gas flows. These could not be used for a short time due to unplanned repair work.

Towards the end of the month, gas prices rose with Gazprom’s announcement that it would supply only 20 percent of full capacity from Wednesday. Market participants fear a shortage of gas in the winter and this is clearly driving up prices.

In view of the further worsening gas crisis and related recession concerns are the EUA lead contract over the month by twelve percent. On 20th July, the CO2 December future fell to 79.01 euros/t CO2, its lowest level since mid-May. The volatile quotations continue to be supported by uncertainties on the gas market (source: energate-messenger).

Renewables accounted for 51.5 percent of net electricity generation in July, about four percent higher than a year earlier and on par with the annual average. Net electricity generation from renewables was just under 35.5 TWh. While solar feed-in was at normal levels, wind feed-in was below average. Temperatures are at an unusually high level, about 3 degrees above normal. Heat wave in Germany supports prices on short-term markets (source: Montel).

The day-ahead price exceeded the hurdle of 400 euros/MWh. For the baseload contract on 27th July, 424.49 euros/MWh were due in trading on EPEX SPOT. The reason for the high level is, in addition to low wind generation, the uncertainty about the development of Nord Stream 1 and the low generation of French nuclear power plants. The spot price had reached such a high level for the first time in March of this year and rose to the record level of 485.57 euros/MWh (source: energate-messenger). Figure 4 shows electricity generation and consumption in July 2022. 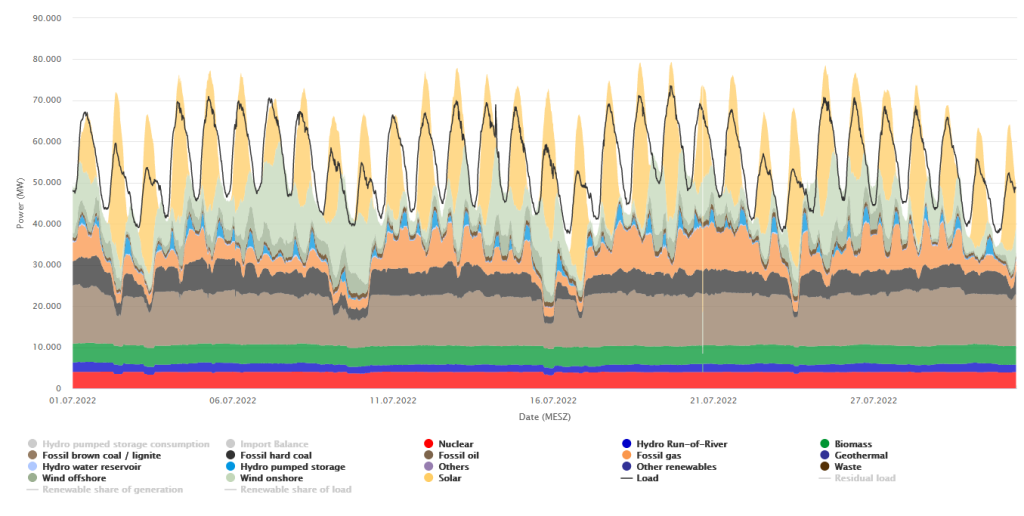 Simon - Love your updates.  Curious, do you think Nuclear will play a role in Germany again?