The energy market shows price records in short-term trading in August 2022 due to news about the Nord Stream 1 pipeline. Price records are also set on the futures market. The traffic light coalition puts together a third relief package. The introduction of the gas procurement levy leads to a heated discussion.

In addition, a fundamental EU electricity market reform is to be initiated. The tenders for solar systems in the second segment were again clearly signed. Natural gas accounts for a large proportion of the German electricity mix.

At the end of August it was already apparent that a third relief package would come from the German government. The package was presented in the first week of September 2022 and also brings some important innovations for the energy market.

On the one hand, an electricity price brake should relieve both citizens and small and medium-sized companies with utility tariffs. Lower prices for basic care are being considered here. Thus, the incentive to save energy should continue to exist, but the electricity prices should fall overall. In addition, the increase in network fees paid by electricity customers should be reduced. The financing of the aforementioned electricity price brake is to be secured in part through random profits from electricity producers.

On the other hand, the upcoming increase in the CO 2 price for national fuel emissions trading will be postponed by one year to January 1, 2024. Normally, the CO 2 price for fossil fuels such as petrol, diesel, heating oil and natural gas would already have increased on January 1. January 2023 by five EUR/t. (Source: Federal Government , tagesschau )

The ups and downs of the gas procurement levy

As early as the end of July 2022, reports of a planned surcharge for gas customers had increased. On August 5, the ordinance on the temporary gas levy came into force. The core idea of ​​the levy is to secure the energy supply in Germany. Gas importers, who have to make expensive replacement purchases in the short term due to the throttling of Russian deliveries, should be relieved. The extra costs incurred by the importers are passed on to all consumers (source: tagesschau ).

Due to sharp criticism from the FDP and SPD, the regulation is now to be revised. Federal Economics Minister Robert Habeck also agreed to change the gas surcharge by the end of August. The change is intended to prevent companies without financial need from benefiting from the additional payments made by gas customers (source: tagesschau) .

A decoupling of gas and electricity prices could dampen the sustained increase in electricity prices. Therefore, on August 26, 2022, the German federal government announced that it would examine this coupling - supported by the European Commission and Austria. The aim of the reform is to decouple end customer prices for electricity from rising gas prices.

The prices on the wholesale market for electricity are determined by the order of use of the power plants offering on the electricity exchange - the merit order. The last power plant needed to meet the demand sets the market price with its bid. Since these are often gas-fired power plants, this leads to significantly higher electricity prices given the currently high gas prices.

One possible intervention that is under discussion is the introduction of an excess profit tax on the additional profits that the electricity companies have made from the rising electricity prices. A look outside the box doesn't hurt here. Spain and Italy already have taxes on excess profits, and Belgium, Austria and France are also considering doing so (source: tagesschau , zdf ).

In response to criticism from various quarters, the Federal Ministry of Economics pointed out that the concept of the merit order will remain unchanged. However, problematic effects of the merit order for electricity customers are to be changed.

The high complexity of this reform requires a medium-term period of time, since European partners and the European Commission also have to be involved (source: zdf ).

The bidding process for solar systems in the second segment took place for the second time this year. In order to be able to participate in the tender process, the following conditions apply to the solar systems. You need to:

115 bids with a volume of 214 MW were received. The tendered quantity was set at 767 MW as in the first tender and again clearly undersigned. The average, volume-weighted surcharge value rose by 0.31 cents to 8.84 ct/kWh.

Figure 1 shows the development of the tender volume, the submitted volume, the award volume and the average volume-weighted award value of the past tenders. 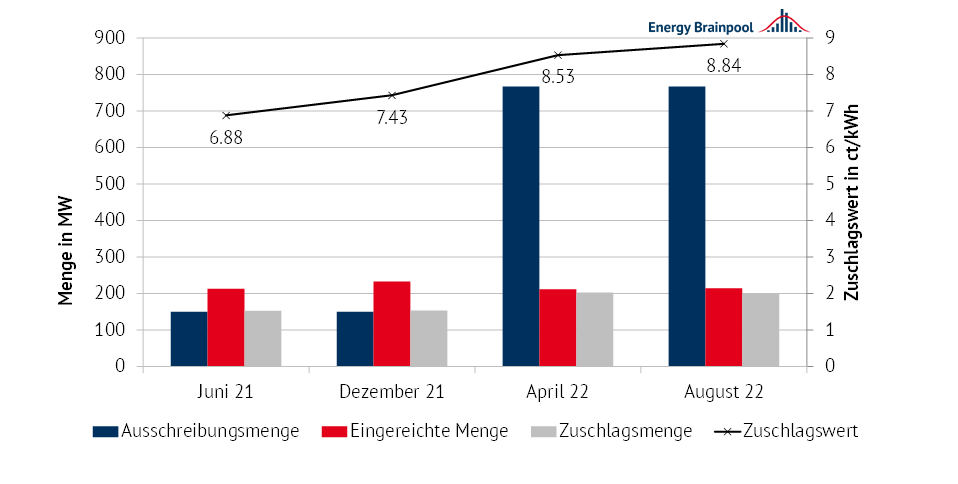 Figure 1: Development of the tender amount, the submitted amount of the award amount and the average volume-weighted award value for solar systems in the second segment from June 2021 to August 22 (Source: Energy Brainpool, 2022)

It is not difficult to see that the amount submitted and, accordingly, the amount awarded has changed almost nothing compared to April. It remains to be seen with interest whether there will be a greater deviation in the additional third tendering round in December 2022 (source: BNetzA ).

The second bid date for the innovation tenders for 2022, on the other hand, has been postponed from August 1 to December 1, 2022 (source: BNetzA ).

The unexpected turn in the futures market?

The announcement of further maintenance work on the Nord Stream 1 pipeline initially caused further drastic jumps in gas prices. Gazprom inspects and services another turbine from August 31 to September 2. After the maintenance was announced, prices on the futures market initially shot up by 10 percent on August 22nd. By the end of the month, a similar development was evident due to the uncertainties and reflected in the prices. The front year 2023 for TTF ended on August 26 with an all-time high of EUR 310.60/MWh (source: Montel ).

Since August 29, however, the gas price has been falling sharply. The reason for this is also the already well-filled gas storage tanks (source: Spiegel ).

Strongly influenced by the gas price, the price of electricity has also reached exorbitant heights. On August 26, the front year 2023 closed with an all-time high of 985 EUR/MWh. However, due to the European Commission's announcement that it would use an emergency instrument to stabilize the electricity market, prices fell sharply.

The December 22 EUA lead contract initially picked up speed and on 19 August reached an all-time high of EUR 98.01/t CO 2 . Ongoing recession worries, a weaker euro and the overall poorer outlook for the economy, however, once again caused a heavy loss by the end of the month (source: Montel ).

The percentage price development of the commodities can be seen in figure 2.

Figure 2: Percentage price development of the German electricity front year (candle sticks), CO2 certificates with delivery in December 2022 (orange line), the gas front year on the TTF (green line) and the coal front year (red line) from the beginning of June to the end of July ( Source: Montel, 2022)

High proportion of natural gas in the electricity mix

The share of renewable energy sources in net electricity generation was 44.8 percent in August 2022, around six percent below the previous year's average. Compared to the previous year's value of 53.7 percent, however, the proportion was significantly lower by 8.9 percentage points. The lower share in August of this year is mainly due to weaker wind feed-in. As a result, the net electricity generation volume from renewable energy sources in August 2022 was almost 17.6 TWh compared to 19.1 TWh in the previous year.

The relatively high share of natural gas in the German electricity mix in August of 11 percent is well above the value of 2 percent in the same month last year. On August 26, the gas price for THE on the spot market reached a record high of EUR 314/MWh. However, by August 31, this had fallen back to just under EUR 200/MWh.

Due to the high gas prices, the electricity prices on the spot market have also risen sharply. On August 29, the day-ahead electricity prices for Germany reached 871 EUR/MWh for the first time and thus fourteen times the average since January 1, 2015. 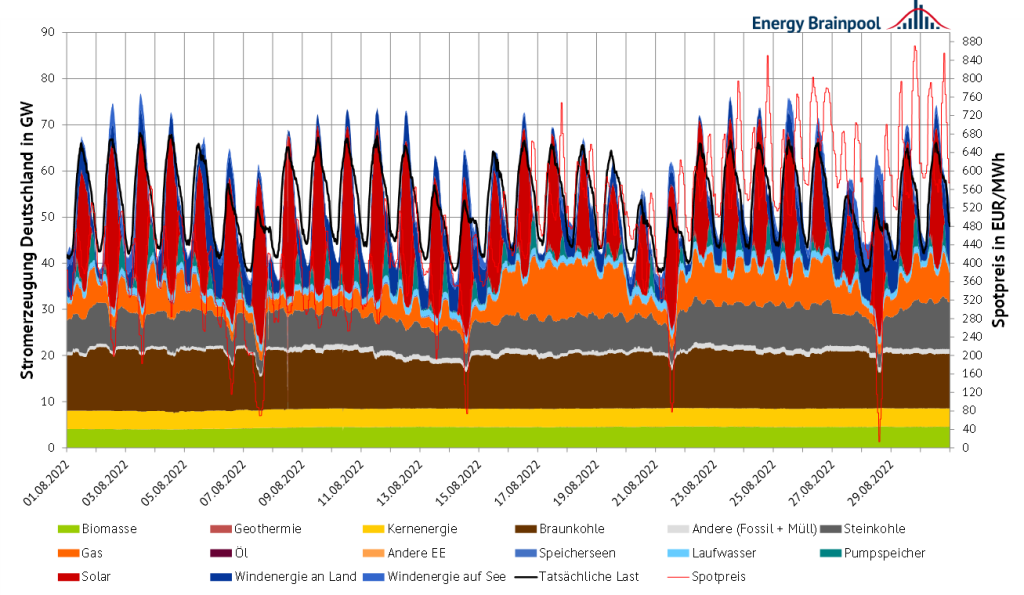 Are you wondering how exactly trading works and, above all, how these enormously high prices can come about? We recommend our live online training course “ Power Trading on Spot and Derivatives Markets ” on November 9th and 10th, 2022 for exactly these exciting questions.

And what else happened on the energy market in July 2022 ? Here is the link to the previous blog post.

Excess profit tax for corporations: other EU countries are leading the way | tagesschau.de

Third relief package: an overview of the measures | tagesschau.de