Due to the ongoing war situation between Russia and Ukraine, no relaxation can be observed on the energy market. Europe imposes new sanctions on Russia and looks for alternative suppliers of gas and coal. The federal government has presented a new package of measures with support for energy-intensive companies.

The results of the solar and biomass tenders have been announced. Both the short-term and futures markets were subject to strong price fluctuations. Power generation in April 2022 was characterized by sunny hours.

How Europe wants to make itself independent of Russian energy imports

At the end of April 2022, Russia announced that it would stop gas exports to Poland and Bulgaria because, from Moscow's point of view, they would not have met the payment demands as agreed. In addition, Russian President Vladimir Putin threatened other countries with gas delivery stops if the payments were not made in rubles. However, EU Commission chief Ursula von der Leyen made it clear that this would mean a violation of EU sanctions. If the EU sanctions are violated, the companies involved face consequences. To avoid this, all you have to do to pay for gas is open an account with the Russian Gazprombank. This converts the euro or dollar into rubles (source: Tagesschau ).

Due to the ongoing geopolitical crisis, the EU member states have set up a purchasing platform for gas, LNG and hydrogen. In this way, one wants to become more independent of Russian energy imports and react against the strong price fluctuations of natural gas.

In addition, Europe will stop Russian coal imports from August 10th. New potential suppliers are the USA, South Africa, Colombia and Australia. In return, Russia is looking for buyers for energy exports. Despite the war, revenue from Russia's fossil fuel sales has risen to €63 billion since the outbreak. One reason for this is the continued supply via pipelines to Europe in combination with the increase in gas prices (source: Montel ). Figure 1 shows the course of the gas price over the last 5 years. The sharp rise in prices since the beginning of the war is clearly visible. 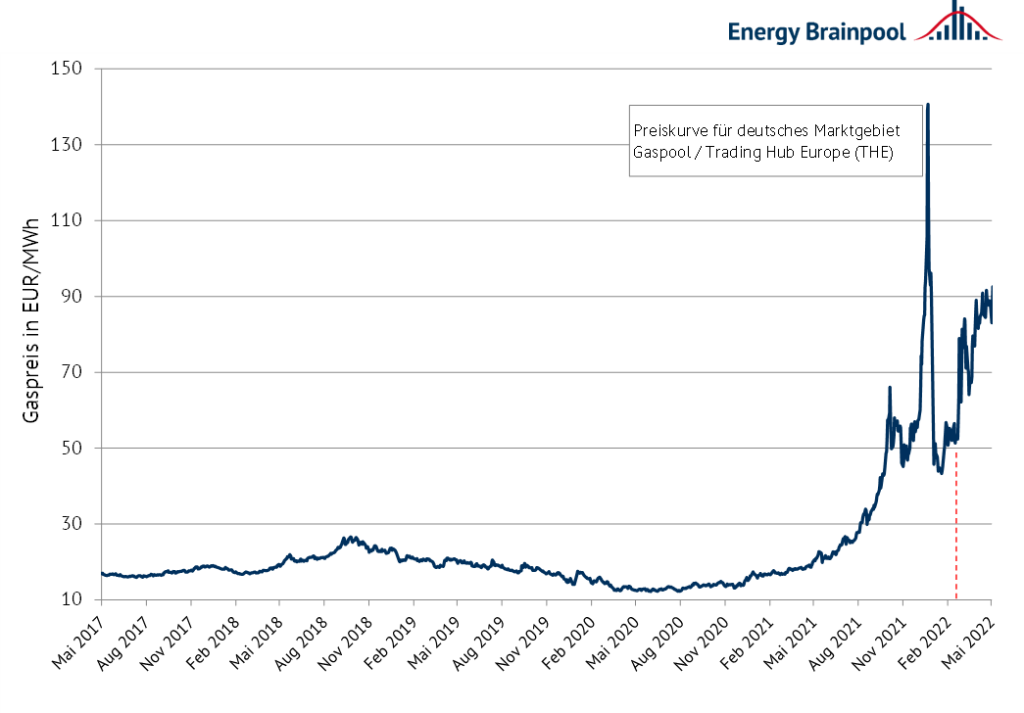 The top priority is to ensure the security of the energy supply. You can find more information on the impact of a Russian natural gas supply freeze to Germany and Europe in the following blog post: " Why it's good that Gazprom Germania has been put under trusteeship! "

Package of measures for energy-intensive companies

On April 8, Finance Minister Christian Lindner (FDP) and Economics Minister Robert Habeck (Greens) announced a package of measures. With this, the federal government wants to support companies that have suffered financial losses due to high energy prices as a result of the Russia-Ukraine war.

The package includes state aid for companies in Germany. Among other things, a loan program from the KfW is planned. If it is proven that they are affected, companies of all sizes and from all sectors are given access to cheaper loans with lower interest rates in order to secure liquidity in the short term.

There are also other guarantee and grant programs. Energy-intensive companies that are confronted with high additional costs due to increased natural gas and electricity prices can receive a direct subsidy. Part of the price difference between the electricity and gas costs paid in 2022 compared to the costs incurred in 2021 will be subsidized proportionately. Companies that are particularly affected receive a higher percentage and thus higher subsidies (source: Federal Ministry of Finance ).

Tenders for solar systems not drastically oversubscribed for the first time

At the beginning of March, tenders for solar systems in the first segment took place. According to this, ground-mounted systems and solar systems on structures larger than 750 kW could participate. 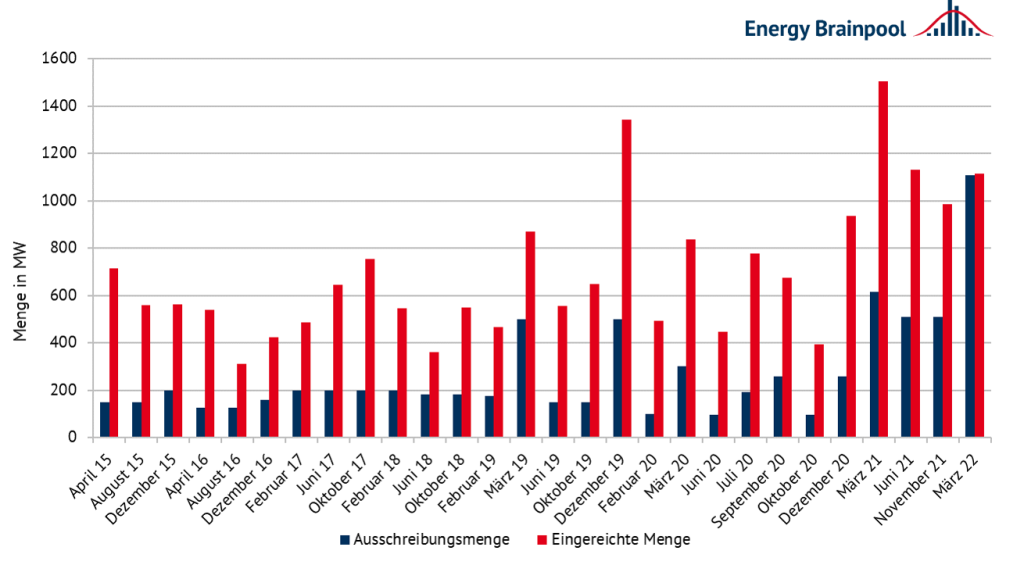 Figure 2: Development of the tender volume and the submitted volume for solar systems of the first segment from April 2015 to March 22 (Source: Energy Brainpool, 2022)

201 bids with a total output of 1,084 MW were accepted. The award values ​​determined in the bidding process are between 4.05 ct/kWh and 5.55 ct/kWh and the volume-weighted average award value is 5.19 ct/kWh.

Two more tenders for the segment are pending on June 1 and November 1, 2022. The next round has a slightly higher tender volume of 1,126 MW.

The situation is different when it comes to tendering for biomass plants. Although just under 275 MW were tendered, only 81 MW were submitted. The surcharge values ​​are between 12.18 ct/kWh and 18 ct/kWh and the volume-weighted average surcharge value was 15.75 ct/kWh (source: Federal Network Agency ).

The EU imposes an embargo on hard coal from Russia. Accordingly, all coal imports must be stopped from August 10th. As a result , coal prices rose 40 percent in the first half of the month . Nevertheless, imports are currently remaining constant, which means that the price has stabilized again (source: Montel ).

The gas price tends to move sideways, but over the month, the front-year gas price was subject to strong price fluctuations. Concerns about war have had a strong impact on futures market prices.

The price of oil fell with the strict corona lockdown in China, as fears spread that energy consumption would be drastically reduced. With the measures, oil consumption will fall by 1.2 million bbl/day. The lead EUA contract also followed the course of the weak oil prices. It closed at around EUR 83/t EUA, but upward trends can be seen (source: Montel ).

At the end of the month, the news that Russia was stopping gas supplies to Poland and Bulgaria caused sharp price movements on the energy markets (source: energate-messenger ). After the power front year had already cracked the EUR 200 mark this month, the commodity was driven to a new record high of EUR 204/MWh with the coal and gas prices (source: Montel ).

The percentage price development of the commodities can be seen in Figure 3.

April started with strong winds, but for the rest of the month wind feed-in was below the seasonal norm. The output was sometimes less than one GW. Depending on the season, the solar feed-in increases and the output was often over 30 GW. In summary, the average share of renewable energies in electricity generation in Germany in April was 54.5 percent. The value is therefore both above the annual average and five percentage points above the previous year's value (source: Energy Charts ). In addition, the net amount of electricity generated from renewable energy sources was just under 21.59 TWh.

The temperature showed strong fluctuations throughout the month. At the beginning it was below average and at the end of the month it was sometimes five degrees above the norm. The largely dry April and the low rainfall in early summer could lead to delivery problems with coal transport or problems with the river water cooling at plants (source: Montel ). 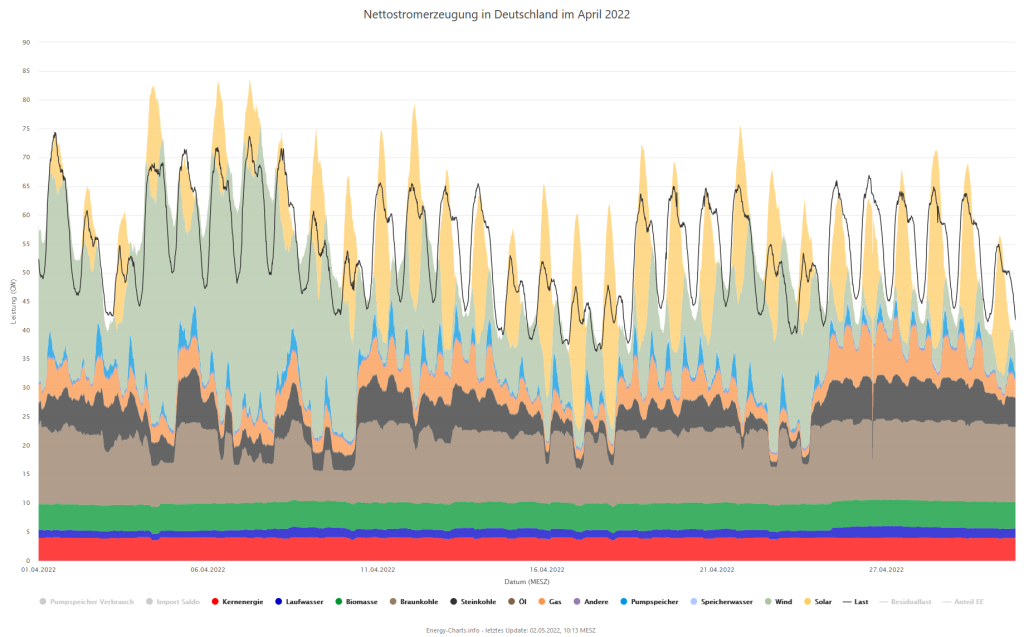