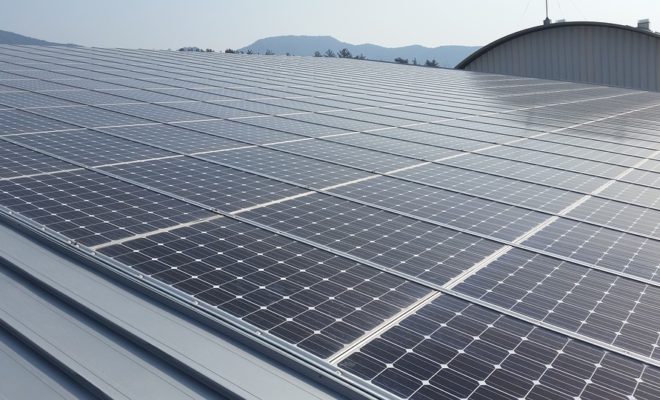 The town of Old Crow, Yukon will get to shut off its noisy, polluting diesel generators for the first time in 50 years, after the Vuntut Gwitchin First Nation’s new solar farm reaches full capacity in July.

“In July, the array will be fully operational, capable of meeting the community’s needs, to the degree diesel generators—some of which date back to the 1970s—will be powered down on sunny days,” CBC reports. “Leaders with the First Nation say the farm will displace 190,000 litres of diesel fuel every year,” about 25% of the community’s total consumption.

The project will offset 750 tonnes of greenhouse gas emissions per year, not including the carbon pollution produced by transporting the community’s diesel fuel by highway and air.

“That silence speaks very loudly,” Vuntut Gwitchin Chief Dana Tizya-Tramm said of the seasonal diesel shutdown. “I think this is a really powerful image, because through this project is the technological realization of our community and our journey back to the land.”

“The symbolism in shutting down those generators will be, we’re becoming more sustainable and we’re becoming more self-sufficient like our ancestors were,” added Brandon Kyikavichik, the community’s heritage interpreter. “The Elders always say once you get to a certain age, that’s when you have to start working towards leaving a foundation for the next generation. This is a process that’s been going on for thousands of years. We need to carry it on.”

The Arctic Council profiles the 940-kilowatt project as “a prime example of a remote, off-grid community taking its sustainable energy future into its own hands, gaining sovereignty while guaranteeing a clean electricity supply to its households. It’s the success story of an Indigenous community acting as project proponent and owner of its infrastructure.”

But “it’s not a unique story—fortunately,” the Council adds. “High energy demands, which are met with expensive, oftentimes unreliable supplies and inefficient, polluting energy sources, are a common challenge across the Arctic. Therefore, over the years, more and more communities have started to lead a shift towards renewable energy solutions.”

The community is building the array under a power purchase agreement with Edmonton-based ATCO Electric that will allow households, businesses, and governments to sell surplus power back to the company—bringing in revenue that will help fund additional renewable energy projects, Tizya-Tramm told CBC.

“Our youth are going to inherit decisions we haven’t even contemplated yet, so we are also trying to empower the youth into leadership roles,” he said. “They are one of our greatest resources in stemming global climate change,” and “the solar farm is a realization of that.”

“The symbolism in shutting down those generators will be, we’re becoming more sustainable and we’re becoming more self-sufficient like our ancestors were,” added Brandon Kyikavichik, the community’s heritage interpreter. “The Elders always say once you get to a certain age, that’s when you have to start working towards leaving a foundation for the next generation. This is a process that’s been going on for thousands of years. We need to carry it on.”

Powerful images. Just as these tribes back in the day were the masters at making use of every resource they had in a way that minimized impact on the land around them, it makes sense they'd want to as fast as possible move away from extracting and burning fossil fuels.