Whether caused by an attack on power grid infrastructure, a design deficiency, or human error, wide area blackouts are a threat to electric power grid reliability. These large-scale blackouts lead to disruption of everything that requires electric power to function, from industrial manufacturing to residential air conditioning and wireless internet.

As we approach a future with hotter summers, more extreme storms, and widespread reliance on renewable energy sources, the risk of wide area blackouts is increased. If a wide area blackout were to occur during a heat wave or cold snap, the effects would be detrimental to the public and deadly to high risk individuals. The cost of recovery could be in the billions of dollars. But what exactly is a wide area blackout and why are they cause for concern?

What is a Wide Area Blackout?

Luckily, each of these blackouts required minimal repairs and power was restored in less than 24 hours. However, this may not be the case for future wide area blackouts.

Wide area blackouts are caused by mismatches between energy production and energy consumption that exceed the normal tolerance band. During normal system operation, energy produced is equal to energy consumed; this is illustrated in Figure 1, where the beam is perfectly balanced on the balance point.

Figure 2 shows power grid operations during fault conditions. When faults occur, the transfer path between energy production facilities and consumers becomes distorted, resulting in a sudden large mismatch between production and consumption. Additionally, the amount of energy transmitted from production facilities is reduced. The amount of distortion is a function of initial conditions. The distortions and changes occur almost instantaneously.

When faults are cleared, a new transfer path is formed. Energy production and energy consumption are temporarily increased until a new balance point is established. At this point, there can be one of two potential outcomes: the grid returns to normal, balanced operating conditions; or the grid balance gets further distorted because energy consumption exceeds energy production, as shown in Figure 3.

If a new balance point is not established in a few seconds, a wide area blackout can occur in cascading fashion. The amount of distortion is a function of initial conditions and newly established, post-fault conditions.

A wide area blackout is the result of a combination of three important power system parameters: triggering events, risk factors, and voltage recovery. Let’s take a closer look at each of these three.

Triggering events are tipping points that may lead to a wide area blackout. During normal system operations, energy produced by power plants, windfarms, solar farms, etc., matches energy consumed by homeowners, businesses, and industry. Occasionally, a fault will trigger a mismatch in energy production and consumption. The fault type and duration determine if the fault will trigger a wide area blackout.

Risk factors are variables that influence recovery. Some risk factors include: 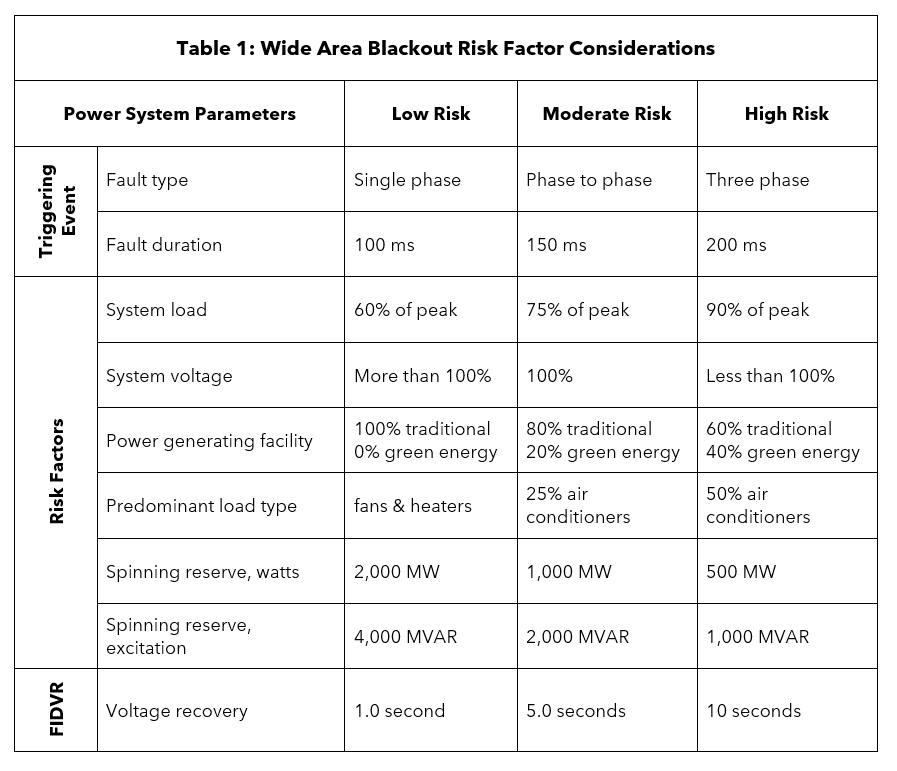 Wide area blackouts are infrequent, happening on average about once every ten years. If they are so infrequent, why are they a concern?

Disruption to essential services, business operations, and industrial production have impacts that persist for days after power is restored. Rivers and streams can be polluted when digesters at sewage treatment plants overflow. Food that thawed in restaurant freezers must be discarded and replaced. Nuclear power plants must be inspected, and limiting conditions of operation must be resolved before power production can resume.

Additionally, the cost of recovery from wide area blackouts will only increase. The Northeast blackout of 2003 is estimated to have cost $6 billion. Costs include losses in sales and manufacturing, as well as food and medication that spoiled without refrigeration. The cost to individuals is often not accounted for. When negligence is discovered, individual electric utilities are assessed multi-million dollar civil penalties.

Although it is difficult to predict when and where a wide area blackout will occur, the conditions that lead to wide area blackouts are well understood. As the climate continues to change, wide area blackouts may become more frequent occurrences. Hotter, longer lasting summers will lead to more air conditioning usage and increased demand for electric power. Additionally, more intense winter storms have already stressed the power grid, leading to blackouts in Texas and Oregon during the winter of 2021.

What are your thoughts on wide area blackout risk? Add a comment below or register for Prescient’s upcoming webinar to join the conversation.

Thanks for sharing, Tony. Do you think with the recent headlines blackouts have unfortunately been making that leaders and grid operators are more amenable to new technologies, solutions, and ideas? Is there newfound momentum towards really solving this reliability issue in new ways?

That is not really a lot of wide spread blackout. One every few years is not really too many. There are a lot more small outages. I wonder how all the outages and numbers show up?  I'm sure weather is the biggest cause with fires being next.

Please let us know all the statistics also how long is the worst outages?

The concern is that we need to do more to assure that the frequency of wide area blackouts does not increase as energy sources and customer loads change.

Not so sure there are more extreme storms. However, there are more populated regions and that increases the probability of grid and distribution system disruptions. Couple that with grid instabilities associated with renewable energy and the likelihood of problems grows further. Add in more people living in fire and flood prone areas, more problems. Ditto for reducing the reliability of the grid by getting rid of coal plants. Getting rid of nuclear plants further exacerbates the problem.

Strikes me that many politicians and the green energy religion are pushing positions that seriously impact both the cost and reliability of the energy supply, but these same folks consider themselves as blameless while bearing no responsibility for the economic damage they create.

Why is NERC so publicly silent on the topic of reliability?

We know that power is becoming less reliable during the past three years. How is reliability and resiliency not the number one topic in the country right now. I know that NERC has historically been quieter than FERC, but I think they need to find their voice pretty quickly.

Three years ago, Randy Hardy was predicting a 5 to 10 gig capacity shortage for the PNW and it got very little attention.

Thanks for sharing Patrick-- the PNW situation hopefully  has the silver lining of making more stakeholders find their voice and the issue come into more focus.

For those curious, I believe this report highlights the Hardy prediciton Patrick is mentioning.

And for what it's worth, in looking up that report I found that Hardy has actually been beating this drum since the turn of the century...

I would like to commend the author for his deep analysis for wide area blackouts. I might add that they were made in purpose to save the integrity of the whole power systems. They made by shedding predefined loads when the integrated system frequency drops below a specified value.

I described that in a post 4 months ago ,https://energycentral.com/c/gr/load-shedding-power-system%E2%80%99s-safe....

Thank you for reminding me of your post.  You and I are in complete agreement with respect to the issues.  My concern is that in the United States, electric companies have minimal undervoltage load shedding and extensive underfrequency load shedding.  With major energy sources at remote locations and major loads in metropolitan areas, underfrequency relaying does not respond to Fault Induced Delayed Voltage Recovery (FIDVR) events.

In my experience, underfrequency relaying is effective when the concern is that there is not enough energy (P) to supply customer load.  When there is not enough excitation energy (Q), voltage decays, air conditioner motors stall, auxiliary systems in traditional power plants trip, and system collapse occurs.  Power factor biased undervoltage relaying schemes are needed to shed load during FIDVR events.

Adding new components, such as Solenoid Series Reactors (Patented by Prescient Transmission Systems) in series with high voltage circuit breakers, can stabilize voltage within 8 milliseconds of a fault and eliminate FIDVR concerns.

Thanks for reply. Control of V&Q is quite mature issue since the synchronous condenser , and all other FACETS applications. The problem may be raised again due to high penetration of solar PV which provide active power P only with zero Q.

Go read the 1967 Federal Power Commission Report (precursor to today’s FERC) on the great Northeast Blackout of 1964.  Many of the recommendations are still applicable today.

Don't know that I could trace down a link to the report (any guidance on that, John?) but I did find the associated testimony on it from that time: Link

I was able to get to a host of relevant information through IEEE but unfortunately I can't forward it. There has to be a public version out there somewhere.