Why Lab Testing, Field Experience and Adherence to International Standards are Key to Ensuring Grid Reliability Without access to affordable and reliable electricity no economy in today’s highly competitive world can flourish. We use electricity to pump water to grow crops, operate commercial and industrial equipment, heat and cool our homes, power our electronic devices and much more. A recent power outage in Mumbai was attributed to the overloading of three high voltage lines which underscores the importance of modernizing the grid with high performance conductors. While tens of millions of people have little to no access to electricity, major efforts are underway to correct this, and efforts to build a modern and efficient grid are well underway, worldwide.

It is noteworthy that conductor technology had changed very little over the last several decades until recently. For instance, steel reinforced ACSR conductor was introduced in the early 1900’s – over one-hundred years ago. In the 1970’s a higher temperature version, ACSS conductor, enabled higher current flows but with greater power losses and poor sag performance.

For good reason, Utilities are very conservative by nature. Safety, reliability and resilience are at the very top of the list. For this reason, both 3M and CTC Global in collaboration with the U.S Department of Energy, the Electric Power Research Institute (EPRI), key utility companies, and a number of international universities and laboratories conducted substantial testing to develop technologies, measure performance attributes and operating parameters, and evaluate longevity in the extremely harsh environmental conditions in which overhead conductors are expected to operate for a minimum of 40 to 50 years or more.

In addition to core testing, mechanical and electrical conductor testing and field trials (discussed in more detail below), overhead conductors are part of an overall system that include ancillary components such as splices, dead-ends, suspension clamps and jumpers. The importance of the development and testing of suitable connectors and ancillary hardware components for new conductor technologies cannot be understated, and the amount of energy expended on the two products described was substantial. Figure 1 offers a list of testing performed. 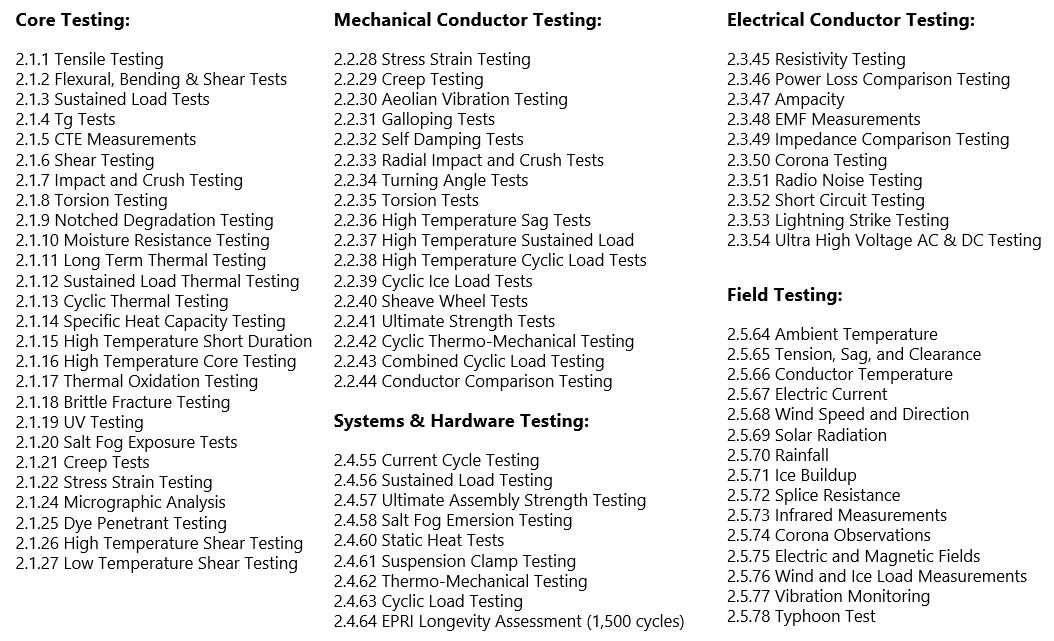 As part of their analysis of various composite core conductors, American Electric Power (AEP) designed and conducted a “Sequential Mechanical Test.” In this series, they installed conductor samples on a load-frame with a suspension clamp mounted at a one-third span. The conductor samples were first subjected to a series of bending tests to replicate installation stresses. The samples were then subjected to 100 million cycles of vibration followed by one hundred thousand cycles of galloping, and subsequently pulled to failure.

Remnants of the ACCC Conductor were then subjected to approximately two dozen additional tests. To address concerns about the flexibility of the single strand composite core, AEP placed the Drake size conductor sample in an electrician’s conduit pipe bender and bent the sample ten times to 90 degrees+. They then removed the composite core, cut it into 10 mm samples, placed the samples into die penetrant and looked for damage under a microscope. After all of this, virtually no damage was observed. This test series not only confirmed the conductor’s overall toughness, it also confirmed that the single strand composite core design has excellent flexibility and highly resistant to damage compared to smaller multi-strand composite core designs. Figure 2 highlights the observations.

Figure 2 – ACCC Core bent to 90 degrees with no remarkable damage.

“Load path redundancy” was another concern regarding single-strand composite core designs. Designers of multi-strand core designs argued that “if you only have one core strand and it gets damaged, there is no load path redundancy, and it will fail.” In the case of the 9.53 mm (3/8”) ACCC Core tested by AEP, lab tests showed that some ‘notched edge’ or ‘circumferential’ damage will result in a loss of strength. The degree of damage reflected the degree of strength loss. Subsequently, a Drake size ACCC Conductor installed on a Western Area Power Administration (WAPA) trial line was shot by a hunter with a high caliber rifle. While the conductor and core were damaged and required the installation of a full-tension splice, the fact that the composite core in this size contains ~600,000 carbon fibers and ~400,000 glass fibers proved, in fact, that there was plenty of load path redundancy to prevent catastrophic failure> Figure 3 provides additional details.

In addition to the laboratory testing process that took place over a period of several years, field experience contributed substantially to the overall knowledge gained on these novel conductors. While field trials confirmed the suitability of conventional installation equipment and safe installation procedures, there were things ‘learned the hard way.’ These exercises proved highly valuable to Utilities that subsequently installed these products.

Over time, additional knowledge was gained from a number of real-world events. For instance, in 2013 an EF 5 tornado crossed directly over one of these conductors and caused extensive damage to the community. In this case, a steel monopole was hit by flying debris which caused a shockwave that snapped the conductive aluminum strands. Fortunately, the single-strand composite core was not damaged and held the conductor in the air which expedited repairs. If the core failed, the conductor would have fallen to the ground which would have had to be replaced or repaired using pulling equipment that was needed elsewhere. This attribute falls under the category of ‘resilience,” and was a good lesson. Figure 4 shows a quick repair in process. 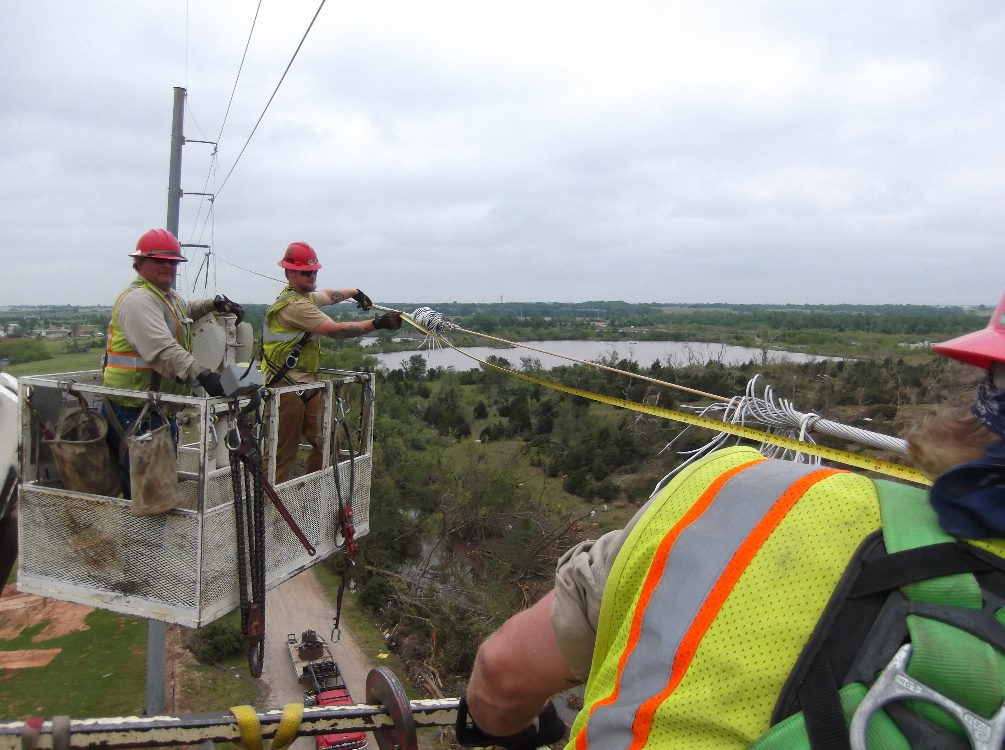 During the previous year (2012), a wildfire burned wood poles (H-frame configuration) on an ACCC transmission line near Reno, Nevada. Fortunately, the very small (218.1 mm2) Linnet size ACCC Conductor was not damaged which allowed linemen, with the support of a helicopter to replace the wood poles and insulators and quickly lift the cross arms and conductor back into place and back into service. This is another good example of the toughness of carbon fiber composites and how it supports grid resilience. Figure 5 shows the downed conductor. 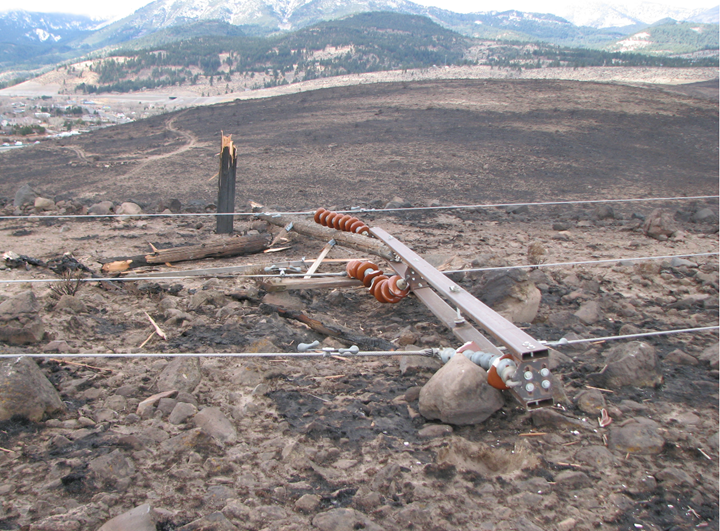 Figure 5 - Undamaged ACCC Conductor on the ground after wildfire. The structures were rebuilt and the conductor quickly put back into service.

Though field experience and lab testing is extremely important, the significance of product quality and manufacturing consistency is hugely important to ensuring grid reliability. For this reason (and others) International Organizations such as ASTM, IEEE, ANSI, ISO, IEC and others develop standards and guidelines.

Originally adopted in 2014 and updated / clarified in 2017 and again in 2020, ASTM B987 “Standard Specification for Carbon Fiber Thermoset Polymer Matrix Composite Core (CFC) for use in Overhead Electrical Conductors” is the only Internationally Recognized Standard for composite cores used as a strength member in overhead conductors.

ASTM B987 specifies a number of performance requirements, test methods and evaluation protocols that include, bending strength, tensile strength, elastic modulus, glass transition temperatures, density, non-conductive galvanic barrier thickness, thermal aging and more. The Standard establishes minimum acceptance criteria; design validation testing; acceptance testing; suitability of design, materials and methods of manufacture; testing frequency; test lab accreditation requirements and product batch acceptance “routine” testing. All of these elements are designed to help ensure that the product offered to the Utility meets the rigors of the product’s application over its anticipated service life. ASTM B987 is generally called out as a requirement in Tender Specifications to help engineers avoid unknowingly putting their systems at risk.

Guidelines, such as Cigre 426 “Guide for Qualifying High Temperature Conductors for Use on Overhead Transmission Lines” (August 2010) have also been published. This particular document offers a good deal of insight into overall conductor performance with an excellent list of ASTM, IEC and ISO Test Protocols and relevant Test Standards. While composite materials are discussed, this document is based more on conventional materials.

IEEE 524 “Guide for the Installation of Overhead Conductors” (April 2017) is another useful reference that shares insight into proper installation practices for most conductor types. In certain areas it recommends following ‘Manufacturer’s Recommendations.’ This statement underscores the value of installation and performance experience.

Carbon fiber composites have been selected for many highly demanding applications ranging from aircraft components to high-pressure cryogenic storage containers. There is little doubt that their attributes of high-strength, light-weight and low coefficient of thermal expansion make them ideally suited for use in overhead powerline conductors.

CTC Global, the developer of the ACCC Conductor and their 34 authorized manufacturing partners welcome newcomers to the powerline market segment. With that said, there are substantial differences between conventional (metal) materials and composite materials. Metal materials can plastically deform and yield. Carbon fiber thermoset composite materials are fully elastic to approximately 2% strain. Using conventional compression hardware on composite materials can exert stress and strain that exceeds acceptable limits. CTC Global developed a patented collet design that enables connections with very little strain. This technology has been proven at more than 900 projects in 60 countries (with more than 100 more underway and in the queue). 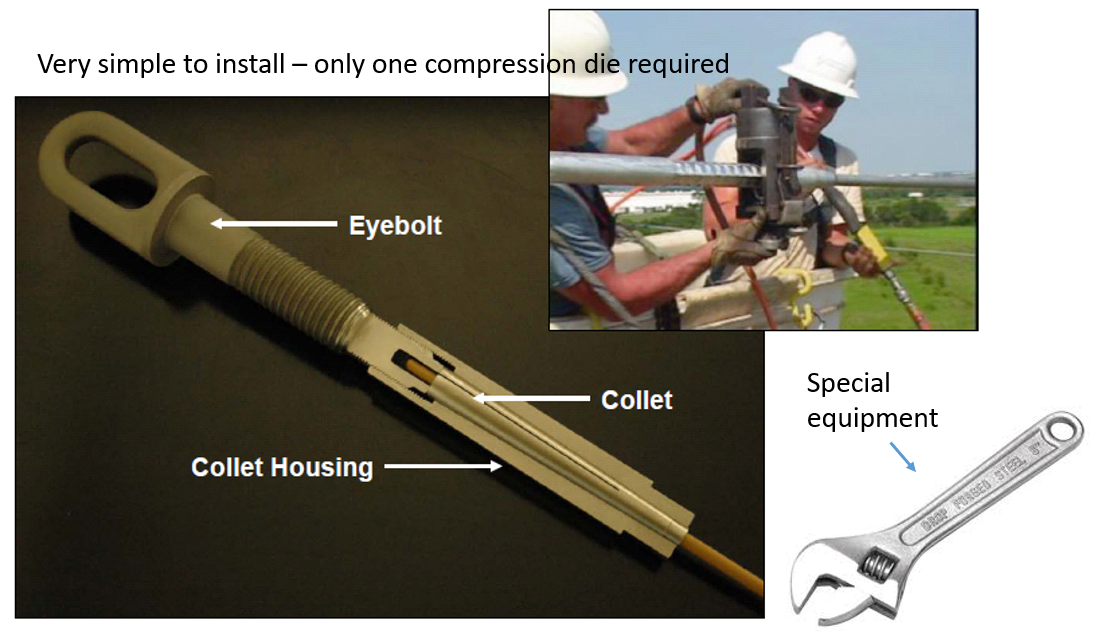 Figure 6 - ACCC Conductor dead-end and splices use a high-quality stainless steel collet design to ensure excellent grip without damage. Nearly one million are in service with zero reported failures.

Though field experience and lab testing is extremely important, the significance of product quality and manufacturing consistency is hugely important to ensuring grid reliability. For this reason (and others) International Organizations such as ASTM, IEEE, ANSI, ISO, IEC and others develop standards and guidelines.

With so many different organizations, is there ever risk of confusion about which standards to follow or which are the 'highest' standard?