There is a rising trend of generating energy locally at distribution voltage level by using small-scale, low-carbon, non-conventional and/or renewable energy sources, like natural gas, bio gas, wind power, solar photovoltaic, fuel cells, micro-turbines, Stirling engines, etc., and their integration into the utility distribution network. This is termed as dispersed or distributed generation (DG) and the generators are termed as distributed energy resources (DERs) or micro-sources.

The Rise of Distributed Generation

The following technical, economic and environmental benefits have led to rising development and integration of DG systems:

The working group CIGRE C6.11 on the development and operation of active distribution networks has reported on the strengths and weaknesses of ADN. Some of the highlighted strengths are automation and control which will lead to improved network access for load customers. ADN will also provide increased operational reliability in terms of power delivery. However, there are some weaknesses which are associated with ADN such as maintenance issue, present lack of experience, and existing communication infrastructure. The following figure is a typical ADN. 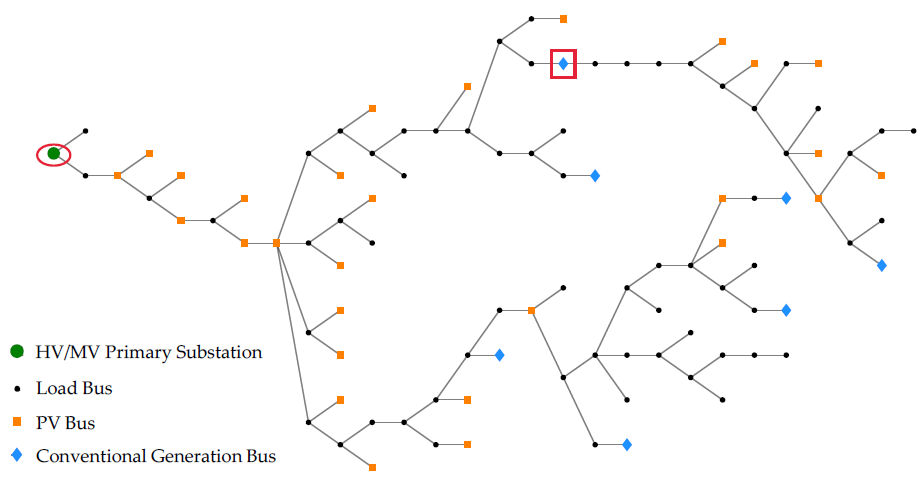 The Importance of Voltage Regulation

The rising number of DG connection has created a significant impact on the voltage profile of distribution networks resulting in the voltage rise above its permissible level particularly, when operated under the traditional control arrangement. The voltage rise is more severe when there is no demand due to the fact that all the local generation is exported back to the primary substation.

Comparisons between decentralized and centralized voltage control methods can be summarized as follows:

Methods of voltage Regulation of ADN

The Local or Decentralized Voltage Control

It is the simplest active voltage level management method, based on existing local measurements and do not require additional data transfer between distribution network nodes. Simple decisions are made for disconnecting distributed energy resources for severe network conditions.

It uses locally available information without any information exchange with a centralized control point. Thus, it is the strategy that best fits the contemporary context, wherein many Distribution Networks evolve slowly with respect to the historical situation.

In a traditional voltage control arrangement, voltage regulation is mainly performed by an on-load tap changer (OLTC) at a transformer substation. In order not to interfere with that existing voltage regulation, DG units are normally required by DNOs to work within a power factor range (e.g., 0.95 leading/lagging). But due to commercial reasons, DG owners commonly keep up a constant power factor close (or equal) to unity disabling the generators to provide voltage support.

In this strategy, each DG unit operates individually and is uncoordinated with other devices, leading to contained costs. Like any voltage regulation performed through generating units, the Local Control also exploits the reactive power capability of the DGs. In fact, these generators could be coupled with more compensators to increase their capability such as: Static Compensators (STATCOM), Distribution STATCOM (D-STATCOM), Static Var Compensators (SVC), Fixed Capacitor Banks and Shunt Capacitor Banks, although some of these devices are costly.

In most general form, Local Control consists of acting on the power factor of the DG unit to keep the voltage at the DG terminals in check. Combining of various methods with power factor control, to gain some advantages such as reliability, efficiency and flexibility can be studied. Moreover, various local voltage control strategies can be studied where the control variable linearly varies with the controlled/monitored measure, such as the nodal voltage or real power output. These control laws are designed to comply with the regulatory requirements.

It is worth noticing warnings about the chance that Local Control strategies could cause unwanted voltage fluctuations at the point of common coupling (PCC). A solution is to adopt an incremental Local Control devoted to preserving the dynamic stability of the regulation.

Semi-Coordinated Voltage Control works with the network’s topology and the electrical limits of the distribution network’s (DN’s) feeders, and tries to satisfy working limits, driving the DN towards a possible optimum. It is suitable for simple networks with few control possibilities and optimization tools, and thus can be considered in simplified forms for poorly supervised large networks with limited telecommunication possibilities.

These strategies must be able to control the DG unit locally in an active manner while coordinating it with a limited number of other network devices. The simplest active voltage level management methods are based on using local measurements and do not need more data transfer between distribution network nodes. These approaches improve the overall network performance with limited costs incurring due to lower need of communication systems. In the literature, a number of voltage control methods have been suggested to control voltage with existence of DGs.

These strategies are limited to small networks such as microgrids, for as long as they are problematic to use in larger scale environments. However, they do not need an increased level of monitoring, data acquisition or controllability of DN. Other Semi-Coordinated Voltage Control approaches use specialized optimization algorithms to calculate the control variables.

Centralized Voltage Control for DNs is designed with a complete and continuous communication system, which can assure a high degree of observability (where an accurate state-estimation can be performed) and controllability. This step is based on continuous Optimal Reactive Power Flow (ORPF) calculations in the network model, provided by the state estimator, wherein the set points for the voltage control assets (OLTC, DGs, etc.) are optimized and delivered. Then, during continuous operation, the optimal set-points and measured values are compared to optimally adapt the set-points to the current network status.

There are many techniques used for centralized control to formulate different types of objective functions. Typical objective functions of the transmission network focuses on the classic active power losses minimization and the maximization of the reactive power reserves to keep the system secure in case of N-1 contingencies. Some objective functions focuses on issues typical to the DNs, like the minimization of the distance between the reactive output of the generators that optimize the network and the user-desired output (in general, zero), or the flattening of the voltage profile of the network around the nominal value.

Intelligent techniques have been widely used to help solve issues associated with the planning of DG systems such as investment and operating cost minimization, capacity and siting of DG determination, coordination of voltage regulators and capacitors and also islanding of power systems with DG.

Intelligent techniques have been widely used to help solve issues associated with the planning of DG systems such as investment and operating cost minimization, capacity and siting of DG determination, coordination of voltage regulators and capacitors and also islanding of power systems with DG.

Well said, and I think one of the main questions remains-- how directly will the utility sector move to align with this coming paradigm and these new technologies vs. letting them be developed by third parties. It may not be the future grid that utilities envisioned, but it's adapt or be left behind!