The State of the Grid

I am the Editor and Chief conrtibutor of Energy Ink Magazine which covers the energy industry in the American Plains and Rocky Mountain region.  Our deeply researched coverage has truly impacted...

The narrative is dire.  The American electric grid is operating on principles developed in the 1880’s.  Old technology makes it increasingly vulnerable to cyber attacks.  Outages are on the rise.  According to Inside Energy, “The five-year annual average of outages have doubled every five years, which means the current five-year annual average is four times what it was fifteen years ago.”  In 2000, there were an average of 2.5 “grid disruption events a month.” In the first half of 2014, there were 21.7 events a month.

According to the American Society of Civil Engineers (ASCE) “It is a grid of yesterday.   When you lose the internet – you’re back in 1979.  If you lose the power system – you’re back in 1879.”  And our “electron guzzling digital economy” is only growing while it seems our transmission system is standing still.  But is it really?

The ASCE’s most recent report card on America’s infrastructure published in 2012 revealed a dismal “D+” for the country’s electric grid as it is in “poor to fair condition and mostly below standard, with many elements approaching the end of their service life. A large portion of the system exhibits significant deterioration.”  This grade reflects  “condition and capacity” that is  “of significant concern with strong risk of failure.”   The ASCE’s grade for the grid in 2009, the previous report - the same - “D+”.  But does that imply that our system has not improved since 2009, or that we’ve improved enough that the grade didn’t fall further?

There are roughly 400,000 miles of transmission lines running across the United States, connected to thousands of substations and hundreds of power plants.  Certainly, much of it looks like remnants from days past.  A great deal of our infrastructure is operating well beyond intended life span.  Nationally, 70% of transmission lines are over 25 years old. The average age of transformers is 40 years – which is also their recommended lifespan.  Over 60% of circuit breakers are more than 30 years old.  Further, between 1999 and 2009, load growth demand increased by 20% while transmission delivery capacity only grew 7%.

Is it really this bad?

But the narrative is incomplete… and slanted.  Critics of the American Society of Civil Engineers point to the notion that the group is in effect engaged in high powered lobbying efforts for their constituents who have much to gain from painting a bleak picture.  Such a picture demands trillions of dollars in investments in transmission upgrades.  Regardless of the truly valuable information the ASCE provides about the country’s infrastructure, little is said about the progress being made.

In May 2016, Green Tech Media reported that ASCE’s “initial report in 2012 did not assume any fundamental shifts in generation technology, but rather used the current mix of generation at the time…”

In other words, the critical assessment by the ASCE did not predict the revolutionary shifts that have taken place in the past five years alone. Efficiencies in the power delivery system are being employed as renewables and the increasing reliance on now cheaper natural gas fired powerplants has helped reduce the burden on the aging grid.  Certainly, increased additions of renewable energy to the grid requires certain specific upgrades, but those upgrades are indeed taking place.

The problem is that progress may feel pale in comparison to need.  According to Shawn Wattles, Stratetic Account Manager for Comrent, it’s tantamount to saying “let’s take all of the salt out of the ocean.”  Change is slow but it is happening.  Comrent provides load bank solutions for testing various systems along the power distribution and transmission chain.  Wattles third party view of the sector provides a unique insight to what is actually happening with the industry versus what is being reported.  He indicates that “…significant upgrades are happening.  The industry is in a major state of transition and transformation.  The renaissance of the digital revolution has reached the core utilities - new technologies are being applied to the 100 year old system.”

The evidence is in the spending.

According to the Energy Information Administration, between 1997 and 2012 electric transmission investments by private companies and investors increased fivefold in real terms (2012 dollars), growing from $2.7 billion in 1997 to $14.1 billion in 2012 — reversing a three-decade decline in such expenditures. 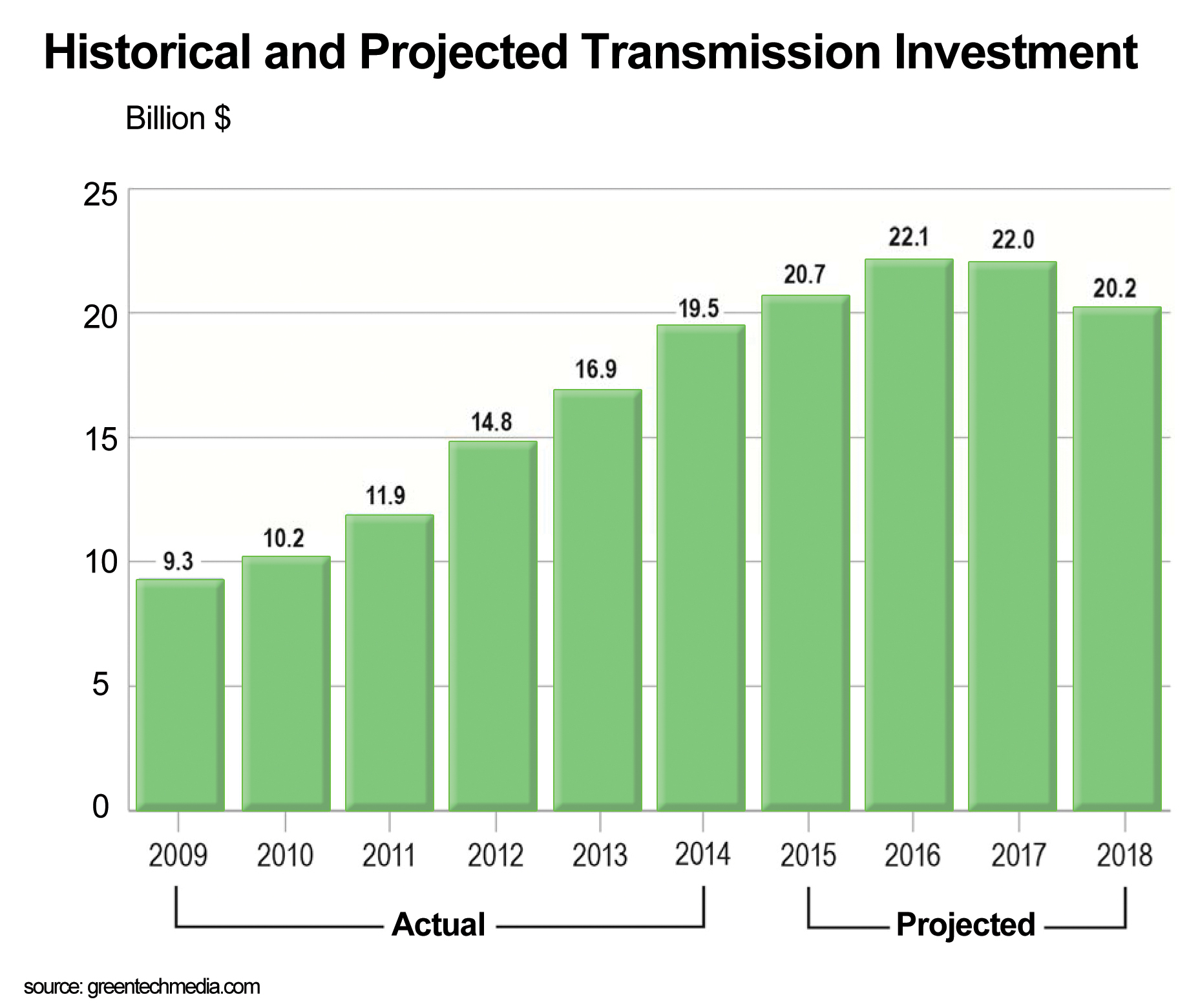 Regardless of the evidence, the AFSE most recent report from May 2016 on America’s infrastructure entitled, “Failure to Act” states that “there is little progress on rebuilding the country” in the realm of its transmission infrastructure.

And the evidence that the grid is not as critical as assumed is clear in the spending. From Green Tech Media:   “as part of the American Reinvestment and Recovery Act, the United States invested more than $4.5 billion for electricity delivery and energy reliability modernization. These funds were matched by more than $5.5 billion from local agencies and the private sector to fund smart grid and energy storage technologies across the country…”  In 2010, Rural Utilities Service added to this total by providing over $7 billion in loans for modernization of rural electric infrastructure.

The evidence is in the outages

Additionally, and perhaps most telling, is that though the level of outages being reported has climbed at an exponential rate, what is not being reported is the nature of those outages.  And frankly the numbers are not just telling, they are surprising.  From 2000 to 2014, 1,652 total outages were reported on the nation’s electrical grid.  Outages ranged from one minute to several days.  Considering the heavy handed warnings from the ASCE which are often repeated en mass by the press and other outlets, this number is in line with the dire condition of the aging electric grid… unless we look at the causes of those outages.

Indeed, there has been a steady increase of outages year over year as shown by data painstakingly collected by Data Journalist Jordan Wirfs-Brock of Inside Energy News from NERC (North American Electric Reliability Corporation) outage reports. From a low of 15 reported outages in 2001 to a high of 307 outages in 2011, numbers have consistently been over 120 since 2010.  But in looking at the watershed year of 2011 (see infographic below) the record outages were driven by weather, vandalism, and outright physical sabotage.  Some 44% of outages were weather related while physical attacks, which in the year prior had never been a reported problem, topped out at 38% of all outages totalling 117 separate attacks resulting in outages.  Load shedding events, also known as rolling blackouts (due to demand outpacing energy supply) combined with “inadequate” resources imply that there simply wasn’t enough power available for demand. These categories resulted in 5% of outages in 2011.  In fact, of the 307 outages that year, only 10 (3.26%) were a result of system failure ranging from generating failures to equipment malfunctions, transmission failures and islanding (where a generator “continues to power a location though electrical grid power from the electric utility is no longer present.”) Though no details on these events were available, islanding often occurs when a solar or wind turbine is feeding electricity to the grid after the power from the electrical utility is no longer present creating on overload on systems that are in effect, shut off. 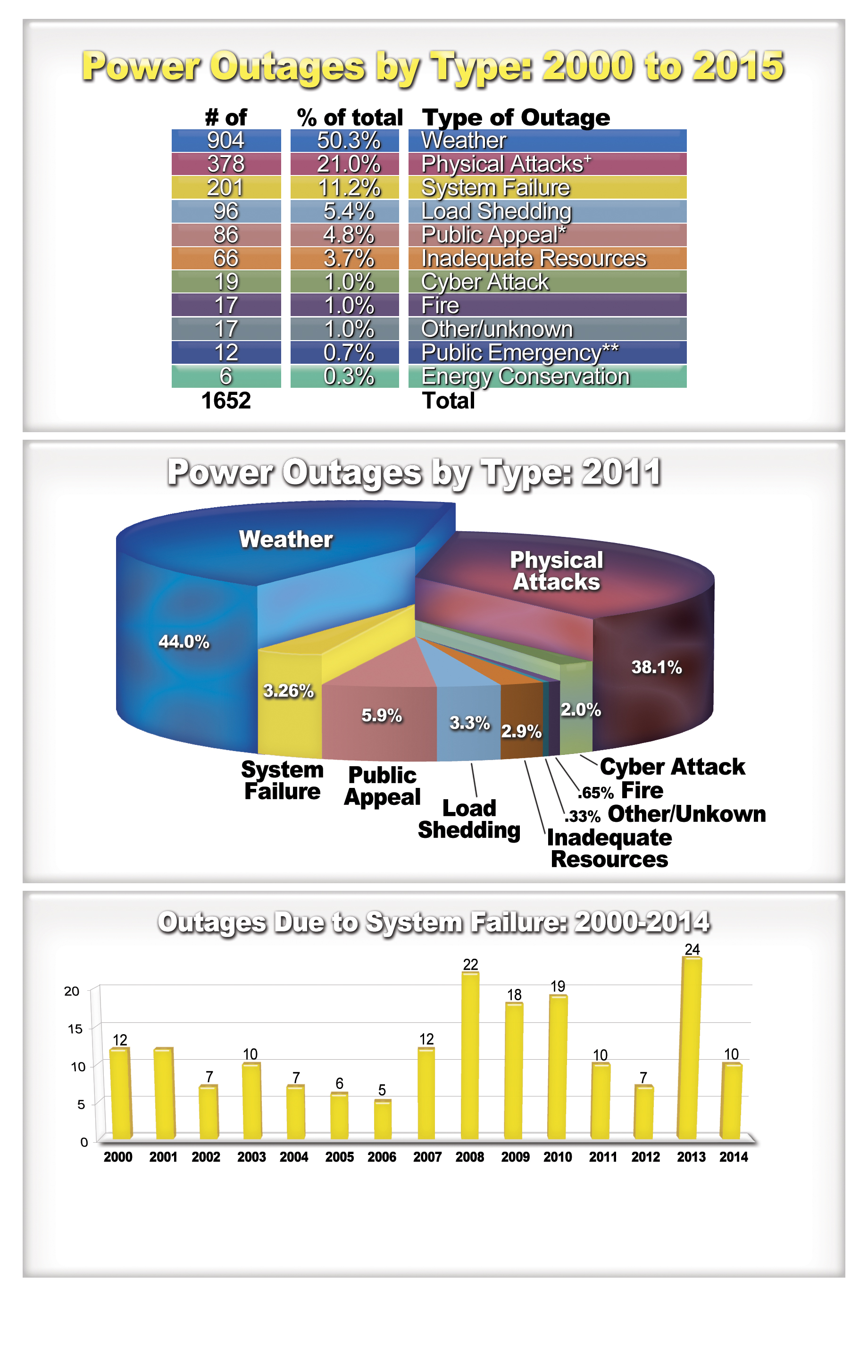 The visible evidence is in front of us as well. Wattles imparted “Summer blackouts used to be common place - we don’t live in that world anymore.  That level of delivery and reliability puts a higher burden on power utilities to perform - the need to test that is what is driving our business.”

Why then is the narrative that our grid is comparable to that of a third world nation, in terrible disrepair, and on the verge of near collapse?  Why is the grid’s grade a D+? Certainly much has yet to be done.  But the seemingly true push behind the dire expositions about the U.S. grid come from three places.  First, European transmission efficiency is often used as the measuring stick against the U.S. grid.  The European grid suffers few failures and employs much newer technology.  But what is ignored is that this system was largely built in the 1950’s after the destruction of World War II. It is a new system based on newer technology and less prone to failure. The next driving force behind the narrative is that it simply makes good press.  Fear sells news.  When pointing to 1,652 outage events in a 15 year period, it is easy to see why there should be fear.  But what news report on the decaying state of the grid adds that only 11% of those events were actually due to system failure?

The ASCE has been a great resource for our nation in keeping up the dialogue on improving the nations roads, bridges, dams, and utility performance.  But when comparing the raw data against their conclusions on transmission, their narrative falls short.

As a life and active member of ASCE for I am aware of their State-by-State evaluation of infrastructure deficiencies – Also I recommend Professor Henry Petroski’s recent book “The Road Taken – The History and Future of America’s Infrastructure” 2016 Bloomsbury – Dr. Petroski is a Civil Engineering Professor at Duke University,

Much appreciated. I'll include it in my next Amazon order.  Thanks.