What next? That question has been posed as the energy industry tries to transition from fossil fuels to renewable energy. More transmission infrastructure and a cohesive grid are needed to reach rural communities. Renewable energy experts sent that message to US Energy Secretary Jennifer Granholm during a roundtable discussion of renewable’s challenges and opportunities. What do you see as current hurdles to widespread adoption of renewable energy?

ALBUQUERQUE, N.M. (AP) — U.S. Energy Secretary Jennifer Granholm heard from industry officials Wednesday about what it will take to boost renewable energy development in New Mexico and across the nation as the Biden administration pushes its initiatives

Paul, what would lead you to believe the energy industry is trying to transition to renewable energy? U.S. gas production increases by leaps and bounds, and for the first time we've become a natural gas exporter.

Though the "energy industry" (as the oil industry has attempted to re-name itself, apparently with success) has been making token gestures at improving its image - a solar farm here, a wind farm there - the potential profit from selling solar panels and wind turbines is an infinitesimal fraction of the potential from selling liquified natural gas (LNG) and its fossil-fuel-based byproduct, hydrogen. And if there's anything of which we can be certain these days, third after death and taxes would be the inexorable pursuit of profit by oil companies - social costs be damned.

Increased consumption of renewable energy, despite misleading "percentage" increases offered by its followers, is being trounced by increased consumption of gas, oil, and coal. So I would disagree that "renewable energy needs a boost" - it's mostly serving as a marketing aid for extending reliance on fossil fuel. Given the oil industry's success at co-opting the term energy, I wouldn't be surprised if it next attempts to co-opt the term renewable - nor would I be surprised if it's successful at that, too.

I think focusing solely on the oil and gas industry may not be the best proxy for renewable growth.  The electric utility industry is leading with transition and will continue investment in renewable tech both through owned assets and power purchase agreements and has led in carbon reduction from 2005 levels. Two big issues moving forward: 1) how will we store excess energy produced - batteries are great for demand response, but do very little for multi-day or seasonal events they only help with resiliency for 4-6 hours...so this will be difficult because large, long term storage is extremely asset intensive and may not be used enough to economically justify it.  2) Transmission capacity assets need to increase in quantity with lower utilization factors in a renewable world - you need to move renewables when they are available...or excess needs to be stored and levelized over time...this problem runs into issue #1.   Gas will play a role in the future as these problems are addressed...good thing is that there are a lot of really smart utility planners and technology companies working on these problems.

"I think focusing solely on the oil and gas industry may not be the best proxy for renewable growth."

The utility industry has indeed led in CO2 reduction from 2005 levels - but solar and wind, at 11% market penetration, had little to do with it. Reduced emissions were almost exclusively the result of replacing coal plants with gas plants - swapping one fossil fuel for another. It's a strategy with only diminishing rewards going forward.

"Gas will play a role in the future as these problems are addressed...good thing is that there are a lot of really smart utility planners and technology companies working on these problems."

Combustion of methane ("natural gas"), now the #1 obstacle to permanent reductions in GHG emissions in the U.S., has never had a role in preventing climate change and never will. Though there are a lot of really smart utility planners and technology companies working out ways to exploit public ignorance of that fact, it's another strategy that will have diminishing rewards going forward.

Sorry, but that's a bit of a pessimistic view on things - as more renewables are built it will displace the gas power production - essentially having more assets that are used less...which isn't ideal, but it works.  The ideal carbon solution would be carbon-less base fuel, like Nuclear, and even better would be a lower cost SMR that could work more flexibly with renewables, but not even a consideration for most planners because of costs, technology development, and moratoriums...you have to work with the paints on your palette.

"As more renewables are built it will displace the gas power production..."

A common misperception. Increasing market penetration of intermittent renewables (solar and wind) only increases consumption of natural gas. They depend on it - for supply balancing, and maintaining frequency and voltage stability. 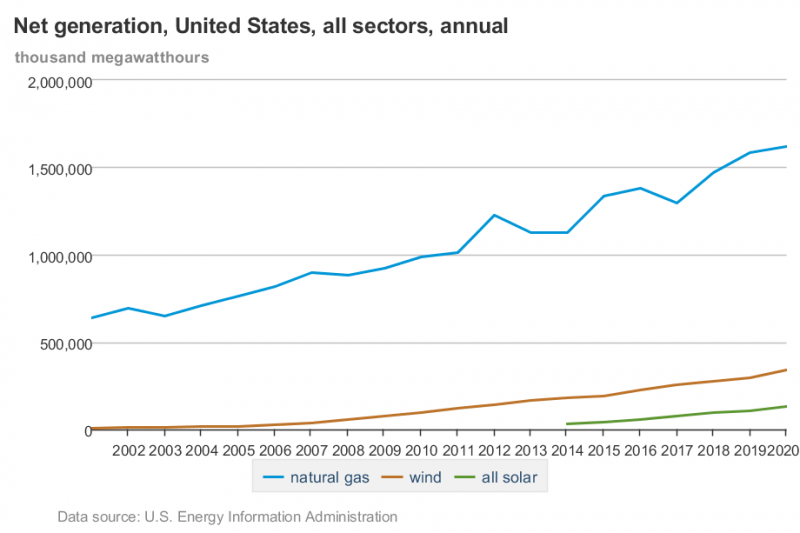 "you have to work with the paints on your palette"

Agree, but among the paints on my palette is allowing climate and energy experts to craft energy policy. Allowing venture capitalists to assume that role is a strategy for fighting climate change that's doomed to failure.

You should add all sources to that EIA data set as well...Coal has decreased by nearly 1M GWh over the same time. So since 2011, Gas has increased by 600k GWh, and Renewables have largely replaced the energy contributions +500GWh.  So the overall fuel reduction is obvious...again, not perfect with the number of assets, but it is reducing CO2.

Replacing coal with gas is reducing CO2, but it will never end dependence on fossil fuels. That's what's necessary - end extraction, as soon as possible, of all fossil fuel for the purposes of generating electricity and powering transportation.

I get the feeling many here don't appreciate what we're up against. The increased number and severity of hydrologic events that we've seen lately are just scratching the surface. In coming decades, the East Coast of the U.S. will see hurricanes unlike any others in recorded history, with waves 100+ feet tall crashing in on coastal communities.

This is not some plot from a science fiction novel - it's already happened. During the last interglacial period 115,000 years ago, similar climatic changes caused huge boulders weighing thousands of tons to wash up on the shores of the Bahamas and other islands in the Caribbean. Climate scientists believe the only cause could be massive superstorms caused by North Atlantic waters warming like they are now. 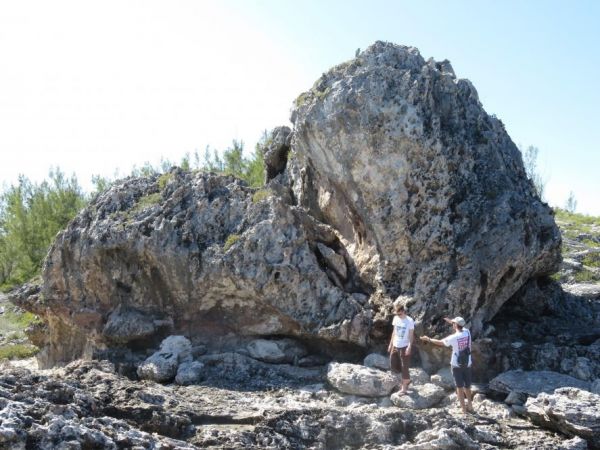 Then, there's ocean acidification. If we don't stop atmospheric CO2 levels from increasing, the rise of carbonic acid in the ocean will, within 30-40 years, make ocean water too acidic for the microscopic animals that make up the foundation of the marine food chain: plankton. Without plankton, by 2100 the world's oceans will be dead zones, without fish, whales, sharks, shellfish, clams - any of the creatures more than one-third of the Earth's inhabitants depend upon for survival now.

Maybe 500 GWh of renewables seems impressive,  but it shouldn't - it's a drop in the bucket. Total primary global energy consumption is 165,000,000 GWh - more than 340,000 times that figure. Solar panels and wind turbines? They're toys. 50 years from now, today's solar panels will be rusting unused in the desert (like the ones installed 50 years ago are today).  Today's offshore wind turbines will be lying on the ocean floor, snapped off like twigs by severe ocean storms that, in 2021, no one believed were possible.

If you don't believe those storms are possible, you might have to consider other viewpoints than those produced by the sales reps of renewable paraphernalia. Highly recommended: Storms of my Grandchildren, by the "Grandfather of Climate Change Awareness", Dr. James Hansen. 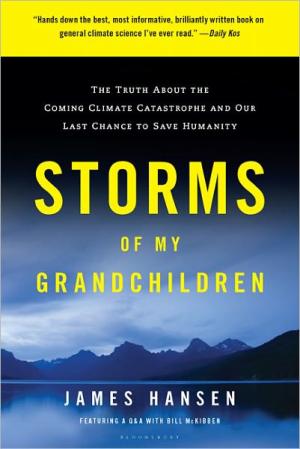 Dr. Hansen knows what he's talking about - and yes, it really is that bad.

Bob, it interesting that you are now talking about the energy industry not going renewable. Where is your source? The energy industry is desperately trying to get a grip on renewable without much success as people have for long read the text on.the wall that if you keep energy production centralized then the usual 65% loss from that will make it factors more expensive than people putting it up on their own compounds. They know.. And they see the doom spelled on their foreheads.

Are you sure that you know what you are talking about, or did you forget to say that it was an assumption?

"The energy industry is desperately trying to get a grip on renewable without much success..."

That would tend to suggest the energy industry isn't going renewable, wouldn't it?

David, the energy industry, like any other, is desperately trying to get a grip on increasing profits. That's all. Stockholders don't care if their company lowers carbon emissions or solves world hunger, as long as its value increases. Now, they are realizing solar and wind's Investment Tax Credit, the free lunch upon which they have depended, is coming to an end. Though the idea was to get them seed money to get off the ground, it's been an exorbitant waste of money (solar and wind generate less than 10% of US electricity). Like an itinerant son, it's time to kick them out of the house and make it on their own.

"And they see the doom spelled on their foreheads..."

The image of a utility executive staring into his bathroom mirror with 'DOOM' spelled on his forehead is amusing, to say the least. The website UtilityDive.com once foresaw the end of utilities by 2015. Though the website still exists, it's forced to live with its lame prediction emblazoned on its homepage ("on its forehead", as it were) to maintain branding.

The only thing more predictable than renewables disciples threatening to go off-grid is them never actually doing it. At least there's one thing on which we can count in this crazy, crazy world.

What do you see as current hurdles to the widespread adoption of renewable energy?

For distributed-scale renewables, there are no common interconnection requirements. What we have now is a state-by-state approach and a utility by utility approach, which leads to loss of benefits from economies of scale for distributed energy providers. What we need is a common set of criteria that applies to multiple states and regions. States adopting a common interconnection standard such as IEEE 1547 for smart inverters would go a long way in connecting more renewables on the distribution grid.

Namibia Green Hydrogen and Derivatives Strategy Report
87 - Inflection point for Biogas and Biomethane / Redefining Energy podcast
What is the role of interconnectors?
Consortium to progress ‘global-scale’ hydrogen and ammonia production and export project in Queensland

Paul commented on ...
Smart meters, Smart devices and dynamic pricing
The technology building blocks are in place to enact such policies. The challenge is making it simple for customers to understand and implement.

Jim commented on ...
More than 17 million control system cyber incidents are hidden in plain sight
What is the time period of these incidents and deaths?  Who is working to resolve these?  What progress have we made on these?

Matt commented on ...
VEX without the puns