With over 11 years of experience, with strong background in Electrical Power Engineering from design to execution of renewable energy projects. Started career as Real Time Operations Engineer....

On the night of 9th January 2021, Pakistan's power system was once again hit by a country-wide blackout. This is not the first time such an event has occurred in the last decade. Prior to this event, almost five similar events have occurred between 2013 and 2015. Two of them knocked out the entire grid whereas the other resulted in the splitting of the network in which one portion of the network survived. Apart from these known events, some events resulted in a power system split. In such cases power system was split into two islands; since no major supply failure was observed therefore they did not become public and caught the attention of the general masses. There needs to be some reason behind the frequent failure of the electrical grid. Technically, it does not make any sense that closing a single breaker on a 3-phase fault [1]. In this article, we would try to look into the issues related to the Pakistan Transmission System from a system planning, operation & control point of view, which is causing frequent blackouts in the country. This assessment is based on the information publicly available.

Pakistan Power System consists of 500kV & 220kV Transmission System owned & operated by NTDC [2]. Sub-Transmission system consists of 132kV network owned & operated by respective distribution companies also known as DISCOs. Pakistan is geographically a longitudinal country. It can be considered as a vertical rectangle. The same is true for the Primary transmission system which starts from Peshawar in the north and extends up to HUB Power in the south. The majority of the load is concentrated in the center of the country whereas hydro potential is located in the north of the country and thermal potential in the south. This means that power flow is expected to have seasonal variation depending on the availability of water resources. During high water season power flows from North towards south whereas during low water season this flow is reversed. From the review of power system statistics data [3, 4], it is observed that the transmission system in the North of Pakistan is well meshed and relatively strong compared to the south of the system. Referring to figure 1 which is applicable in 2013 to 2015 power outages, it can be seen that from Guddu onwards transmission system is interconnected by a double circuit transmission line only. Loss of this double circuit will lead to the isolation of the system. Referring to figure 2; which is applicable for the recent breakdown, it can be seen that from Dadu onwards transmission system has been meshed in the South as well. Another important point to note here is that most of this reinforcement is to evacuate power from newly commissioned thermal power plants. An important point to note here is that all the wind projects are also in the South region. An increase in thermal power generation in the south means that during the low water season flow from the South towards the North will be much higher compared to the year 2015. From the review of the transmission system, we can conclude the following

Guddu is more important in this regard because it also connects Balochistan to the main transmission system through 500/220kV transformers [5]. Such interlinks in Power System terminology are known as interties. All such interties within a network or with other networks are usually restricted by a certain transmission capacity. Generally, the transmission capacity is limited by the following factors

Rotor angle stability limit has the highest priority followed by voltage limit and then thermal limit. In addition to the above another necessary limitation is maintaining the power balance between isolated parts following the splitting of the network. Following splitting of the network one part of the system will have drop in frequency whereas the other parts of the system will observe over frequency depending on the load-generation imbalance. Under Frequency Load Shedding Relays & Over-Frequency Generation Tripping will play a very vital role in maintaining load-generation balance. From the above explanation, it is clear that setting of transmission capacity requires careful consideration & detailed study. Such limiting factors are usually checked against certain criteria of system security. In most of the utilities around the world N-1 criteria is followed, which means that transmission capacity should be set in such a way that it is able to handle the loss of any one equipment. 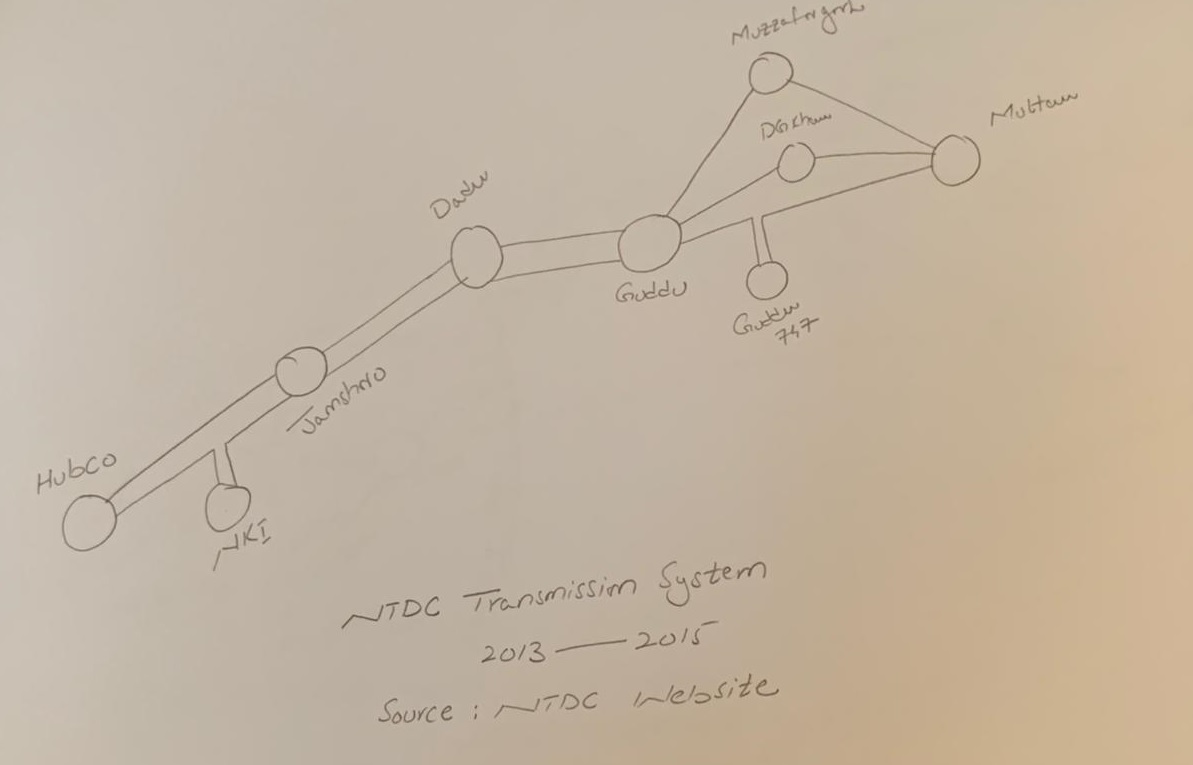 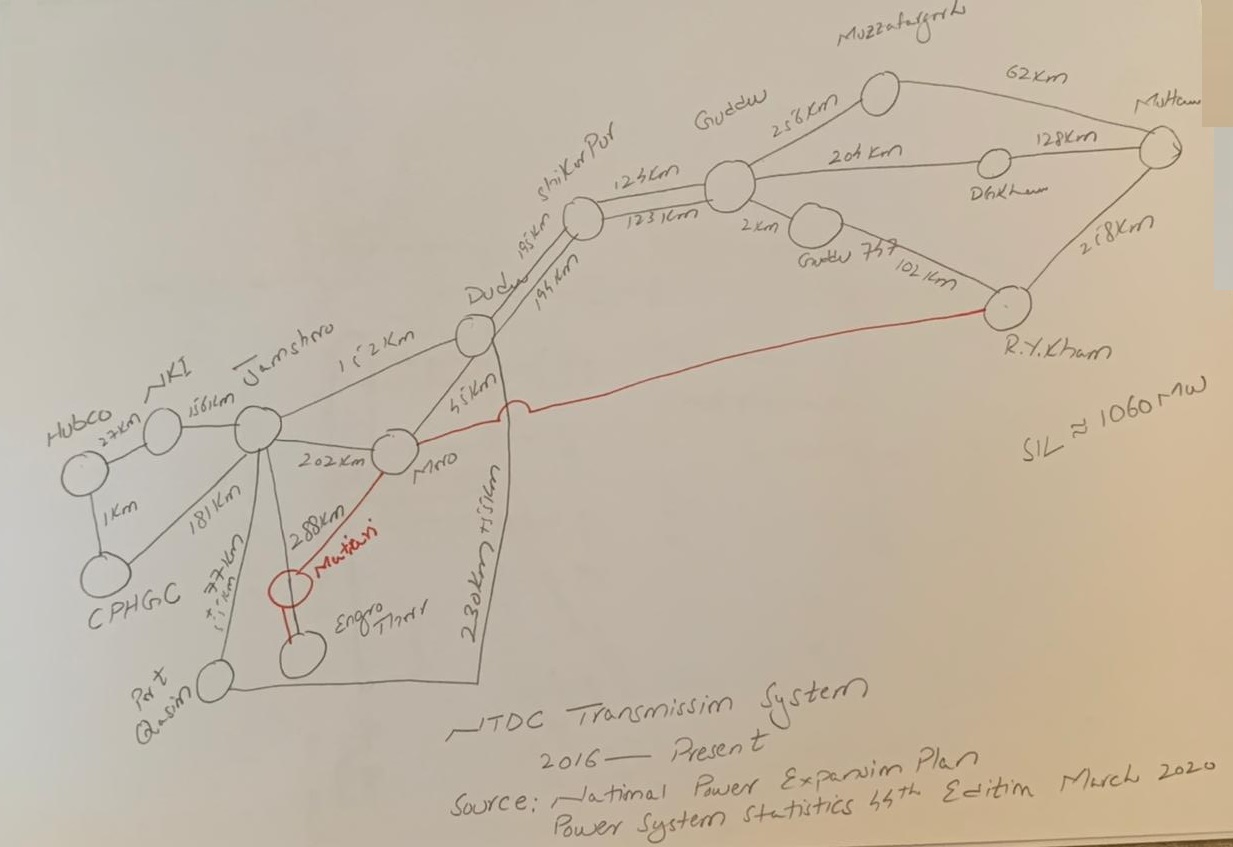 Grid Code clause OC 4.10 states “Each Year NTDC/ the system operator shall prepare transient stability studies for expected system event scenarios that could lead to unsatisfactory system dynamic performance and loss of power angle stability (transient stability). The system operator shall maintain and be able and ready to implement when required, emergency operating procedures designed to mitigate the extent of disturbance resulting from a system event.

NTDC as a system operator shall make stability studies to develop emergency operating plans to deal with the consequences of the occurrence of the most probable faults including the following;

Although grid code does not mention anything about transfer capacities it does provide a clear direction on which faults to consider while assessing the stability of the system. Setting human negligence aside technically closing of circuit breaker with temporary earth closed is similar to a 3-phase fault occurring on the substation bus/circuit breaker. Even if such a condition has occurred fault should have been cleared by the circuit breaker primary protection within 5 cycles. In case respective circuit breaker primary protection failed to operate or breaker failed to open (a term known as breaker struck condition) fault would have been cleared by backup protection in 9 cycles. In a power system, each primary protection is backed-up by secondary protection. Therefore, failure of one breaker leading to the outage of the entire 220kV & 500kV substation is highly unlikely. The important question to ask here is that was the transient stability study for the Year 2021 to assess the impact of a 3-phase fault on the system.  From the review of the JICA report [6] published May 2016, it is observed that stability issues are observed near the converter/inverter station (Jamshoro/Dadu/Matiari) following a 3-phase fault. This identifies the weakness of the HVAC network. It usually observed that in the case of low ESCR (Effective Short Circuit Ratio) systems, the change in the HVAC network could lead to voltage oscillations.

Referring to the news clip [7], it has been reported that prior to the blackout system was operating at 10300MW with the hydro generation of 1287 MW & thermal generation of 9053 MW (983MW from GENCOs [Government Thermal] & 8070MW from IPPs). This particular situation corresponds to the low water season. In such a situation, it is expected that a sizeable amount of power must be flowing through Dadu – Shikarpur/Shikarpur – Guddu and Moro – Rahim Yar Khan link (not sure if this link has been commissioned). From the review the Merit Order also it can be seen that some large power plants like Port Qassim Coal (1250MW), Engro Thar Coal (660MW), China Hubco Coal (1250MW) are on the top, meaning they must be dispatching even under light load conditions.

A large flow of power from a weak system with limited transmission lines usually causes stability issues. In such situation, power flow on the higher side can be problematic even for normally studied criteria like N-1. Expected issues in such cases are 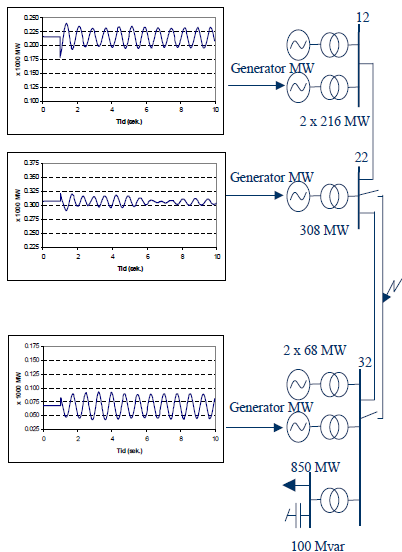 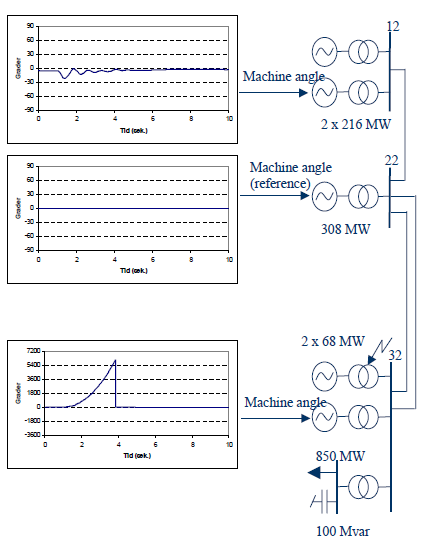 It seems that in case of Pakistan blackout system was already suffering from steady-state stability issues due to large power flow from South to North. Following the 3-phase fault which in this case is the closing of CB on temporary earth, North & South machines failed to maintain synchronism causing both areas to go out of step. A huge power swing must have been observed by the protection relays at Guddu & Shikarpur end. This lead to the complete breakdown of the system.

Figure-5 shows a similar situation. Although the study is for another utility the basic concept is the same. For SLG fault increase in flow of 85MW leads to increased oscillation where SPR ratio increases by almost 18%. The condition will be much worse if a 3-phase fault is simulated. 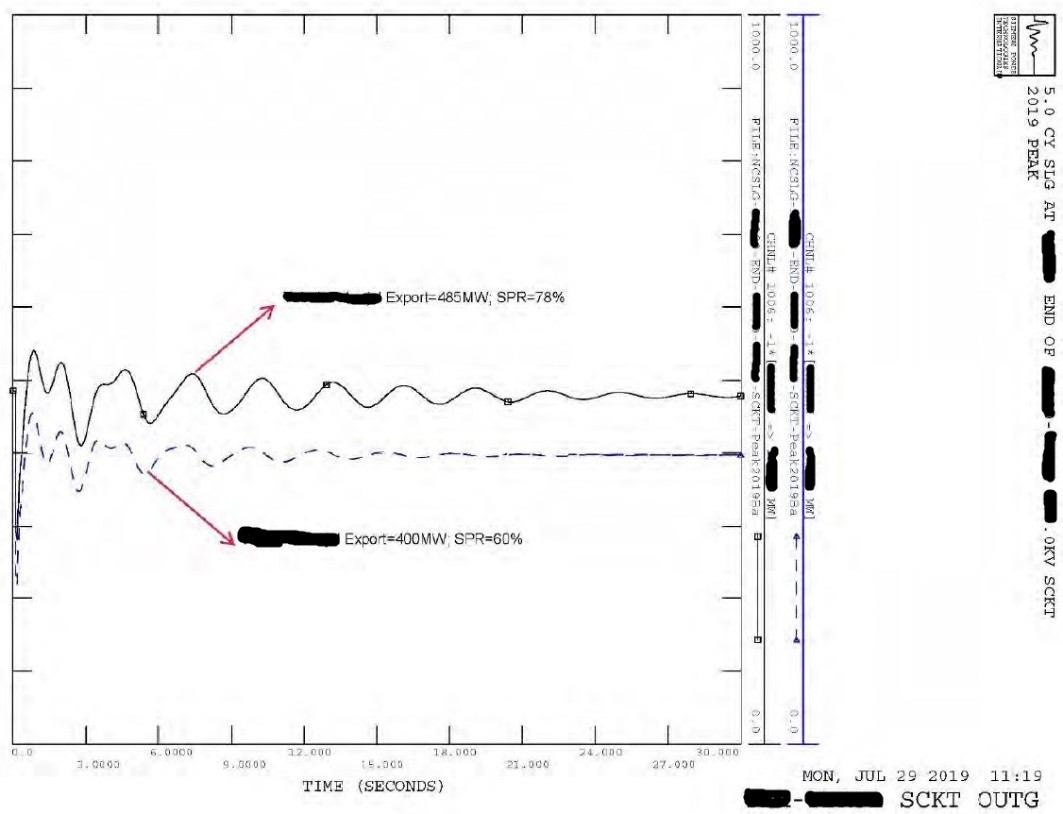 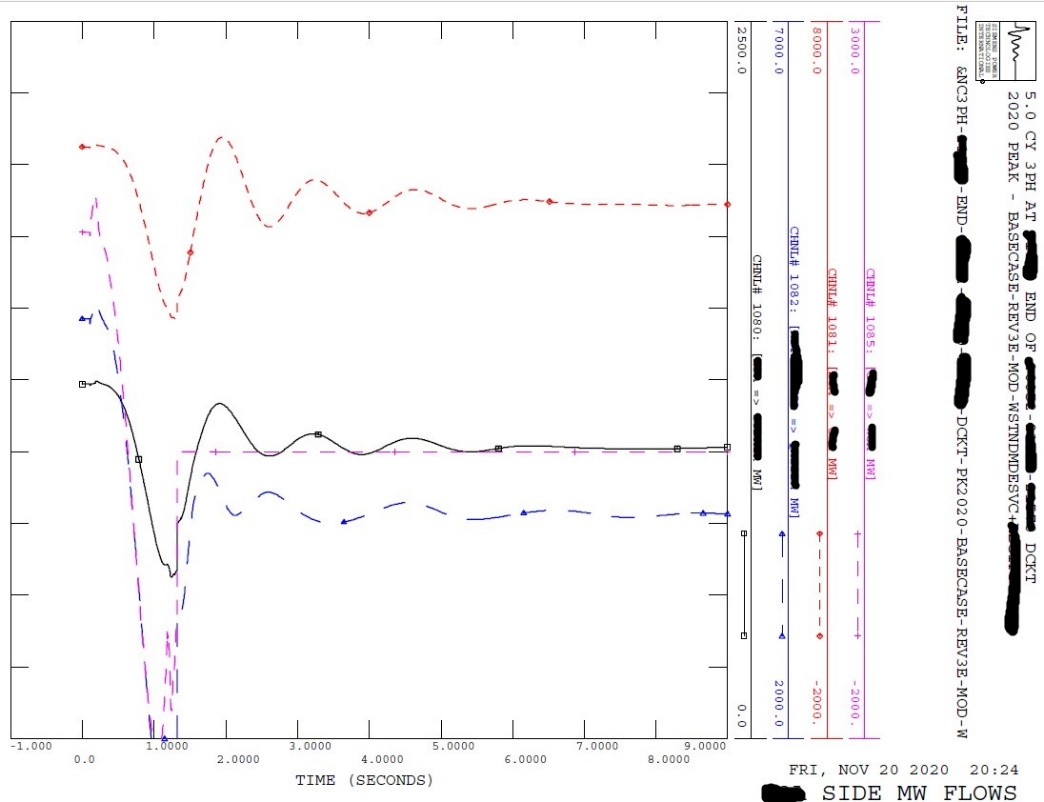 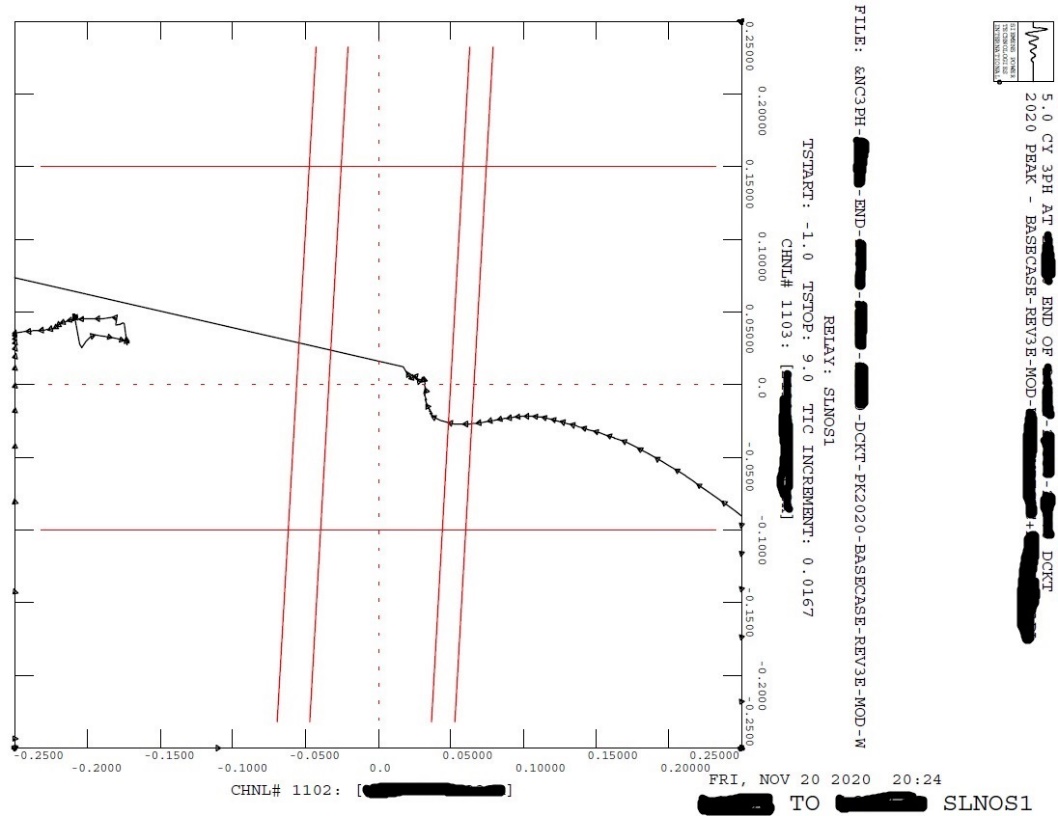 Upon review of Grid Code & other reports publically available, I could not find any reference of inter-area transfer limit. Therefore, it can be concluded that at present NTDCL/ System Operator NPCC is not evaluating such limits. From the review of Network configuration, it is clear that Dadu – Shikarpur D/C & Moro – Rahim Yar Khan S/C can be considered as an interconnection point between North & South. Therefore it is important that the transfer limit shall be calculated on this interlink in both directions as per existing Operational/Planning criteria i.e. considering 3-phase fault normally cleared & delayed clearance. Other recommendations are as under:

Thanks for these great insights, Farhan.

Therefore it is important that the transfer limit shall be calculated on this interlink in both directions as per existing Operational/Planning criteria i.e. considering 3-phase fault normally cleared & delayed clearance

If these are the recommendations, what are the next steps? Is there a central regulator in Pakistan that can start to implement necessary changes?