Jay Caspary is a Vice President with Grid Strategies LLC, helping clients understand the opportunities and barriers to integrating clean energy into the electric grid. Jay was...

This article is reposted from the WATT Coalition blog.

As the power industry builds the future grid, past operating practices that have served the industry for decades will undergo appropriate and beneficial changes. Without mechanisms to minimize risks and increase rewards for implementing those changes, the industry will move slowly. Dynamic Line Ratings are one tool stuck in limbo, with clear system and customer benefits but facing impediments to deployment in the United States.

Renewable interconnection queues continue to grow around the United States, even in regions with recently expanded transmission systems. Those renewables could be built, and transmission asset utilization could be improved drastically, without jeopardizing system security with the deployment of new line-rating technologies.

Traditionally, line ratings are based on conservative weather assumptions – they sometimes change between seasons, but not based on the actual conditions. These ratings determine transmission line thermal operating limits using worst-case assumptions, preparing for every summer day to be hot, cloudless and still.

While DLRs have been used historically for real-time operations, some DLR devices use algorithms to forecast transmission capabilities in the near term to optimize unit commitment and dispatch decisions.  In Belgium, the Transmission System Operator Elia has been using DLRs since 2008 to successfully optimize its network to maximize capabilities and customer benefits, as reported by Wind Europe.

Some transmission owners and operators in the U.S. are deploying DLR on select lines to improve renewable integration and enhance asset utilization. DLR can also help to better manage capital investments for upgrades that would have been the product of traditional transmission system planning studies, because they measure the true existing capacity of the system. DLR allows owners and operators to work smarter and capitalize on the proven benefits and improvements to grid performance.

It is important to note that static line ratings today are not conservative enough and do pose risks for 2-5% of the time.  AARs also have a similar pitfall as they, like static ratings, use the same assumptions around constantly available wind speeds cooling transmission lines which, in many instances, are not correct. The industry needs to focus on better approaches to manage risk and improve rating accuracy, not just increasing ratings. Like static line ratings, the assumed wind speed for AAR is typically fairly low but not zero. Wind speed has the highest, non-linear impact on conductor rating when the wind is not available to cool the line, and AAR does not account for this decrease in the true line rating.

A recent study looking at AAR and DLR for a 345kV line in the Midwest equipped with line monitoring sensors. The heatmap below in Table 1 illustrates the percentage of time when the AAR approach incorrectly and unsafely would have provided additional capacity above the field sensor verified DLR value. Since AAR assumes a fixed wind speed is cooling the line even when it is not, it often incorrectly indicated extra capacity, putting reliability and safety at risk, especially during the overnight hours when wind speeds are typically lowest in the region. AAR, and the static rating approach, ignores the variation of the most influential component in a line rating: wind speed.

Table 1: Percentage of Time the Line’s DLR Verified Rating was Below the Value Indicated by AAR 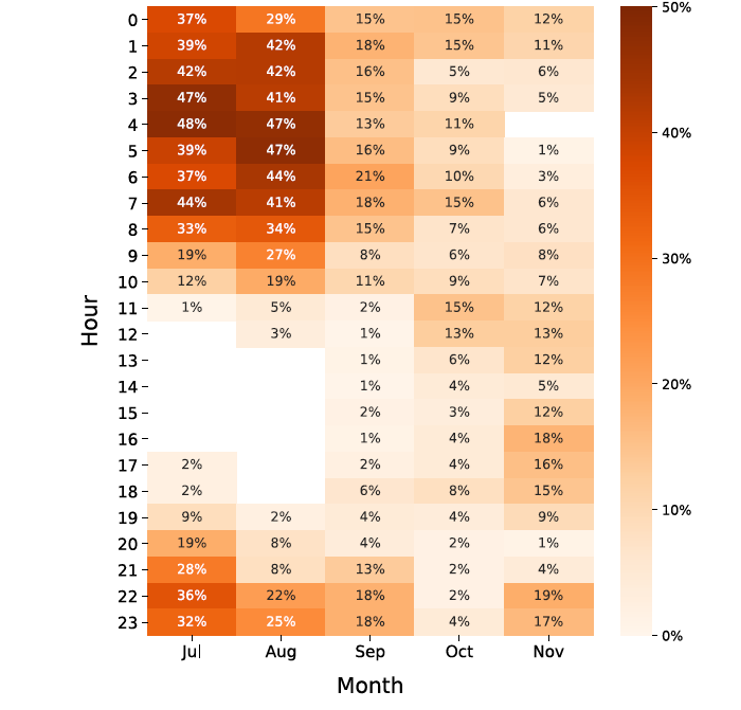 The approved procedures to rate transmission lines need to enter the 21st century. Growing interest in AAR and DLR as main pieces of this transition have sparked productive conversations about their efficacy. In fact, FERC opened an inquiry into transmission line ratings management in 2019 where AAR and DLR were among the main subjects of discussion. Following the inquiry, FERC held a technical conference after which a number of parties expressed their support of updated rating methodologies as effective tools, including the WATT Coalition (comments here).

However, this transition must be approached in a smart way, without sacrificing reliability and security, while avoiding overloads of conductors past safe operating limits during the small fraction of hours when static emergency ratings of conductors are risky.

The opportunity to eliminate assumptions and know true line ratings in real time motivates innovative utilities to deploy DLR, not AAR, to enhance renewable integration without adding significant new transmission lines. Others are installing DLR to enhance asset utilization; they get more out of the existing system in a matter of months, rather than years, at minimal costs. This is low hanging fruit that is ripening quickly.

Table 2 shows latent capacity above AAR that would be available for the same 345kV line in the Midwest using DLR based on recent data. 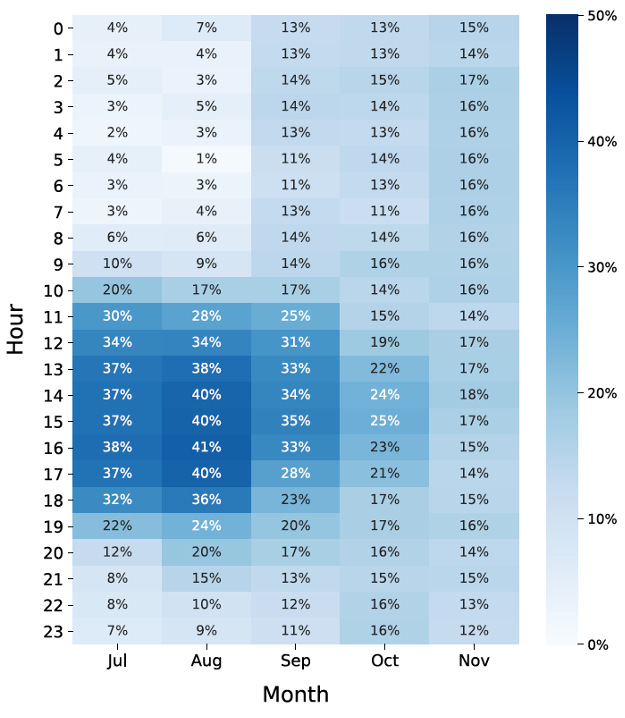 This analysis demonstrates that the use of DLR can result in large increases in line ratings above those provided by AAR. Furthermore, the greatest increases were observed during mid-day hours, which are concurrent with peak system demand and peak renewable generation output.  The additional capacity that could be realized by deploying DLRs is significant and warrants further exploration by industry leaders and stakeholders.

There are challenges to operationalizing forecasted and real-time dynamic line ratings, but steps to address them are already underway. PJM is developing a Dynamic Line Ratings desk reference guide to be used by control room staff and SPP has issued updated manuals detailing data transfer specifications for DLR. With many of the ISO/RTOs already putting the pieces together to operationalize DLR, supporting the shared mission of ensuring reliability. Deploying DLR means the appropriate, accurate rating is driving decisions.

Thanks for sharing, Jay-- you make a great case for the importance of such accurate line ratings. From a practical perspective, which stakeholders have the most ability to influence the change to put these into place? Does it have to come from a top-down regulatory approach, or can individual ISOs simply make the decision independently?

Good questions, Matt.  Both approaches are working, although not to the extent that is warranted.  FERC's RM20-16 is a step in the right direction but it will take a long time for compliance plans to be implemented. I sincerely appreciate the proactive leadership being demonstrated by some ISO/RTOs, as well as individual TOs to deploy DLRs.  Increased transparency is important and critical for effective planning and improved operations.  Managing congestion will become an increasingly difficult challenge in the near term and I think our industry must find ways to take full advantage of Grid Enhancing Technologies, like DLR.

Great article, Jay - you cover topics that public utility commissioners should know more about, when making important decisions that affect the future of line transmission in the U.S.

You look at it from the perspective of ensuring line reliability by stretching the limits of transmission capacity to the fullest. As a nuclear energy advocate, I look at it from a different perspective - that taking this approach has only become necessary due to the integration of intermittent solar and wind, and the incredible stresses unpredictable peaks in generation put on existing assets.

You look at it from the perspective of avoiding thermal limits of transmission lines, and the sag that results; as an environmentalist, I look at it from the perspective that every degree of heat is energy wasted and higher emissions, on a grid where we should be more concerned about improving line efficiency than how to keep lines from melting from their towers, or sagging into trees and starting fires.

Not faulting your perspective at all - it's necessary, and represents a remarkable achievement. I'm faulting the policy that makes these band-aids necessary.

Thanks Bob.  I appreciate your comments and wish we had a better, holistic solution.  I do think we need to take advantage of new tools like DLR in the interim because the future grid will take decades to realize after we get a shared vision and some leadership at the federal and state levels.  Decarbonization is a mandate and reality that we have to address.  All the best...

Great article Jay. Thanks for posting.