I am glad FERC has followed up FERC Order 881 mandating Ambient Adjusted Ratings (AARs), issued December 2021 with this Notice of Inquiry on Dynamic Line Ratings (DLRs). Taken in total AARs and DLRs are part of the Grid Enhancing Technologies.

FERC defines AARs as, “propose to define an ambient-adjusted line rating, or AAR, as a transmission line rating that:  (1) applies to a time period of not greater than one hour; (2) reflects an up-to-date forecast of ambient air temperature across the time period to which the rating applies; and (3) is calculated at least each hour, if not more frequently.”

FERC defined[1] Dynamic Line Ratings DLR as "as a transmission line rating that: (1) applies to a time period of not greater than one hour; (2) reflects up-to-date forecasts of inputs such as (but not limited to) ambient air temperature, wind, solar irradiance intensity, transmission line tension, or transmission line sag; and (3) is calculated at least each hour, if not more frequently."

FERC Staff White paper is a good reference for both AARs and DLRs. https://www.ferc.gov/sites/default/files/2020-05/tran-line-ratings.pdf

It remains to be seen how fast transmission providers like transmission owners and independent system operators implement GETs in interconnecting renewable projects because interconnection queues are backlogged by 2-3 years at most grid operators.

In the words of Pine Gate Renewables who submitted these comments in the FERC Advanced Notice of Proposed Rulemaking (ANOPR), this is the issue, “Pine Gate has advocated for GETs to be considered in the interconnection process as a means of reducing the need for costly network upgrades, but is often met by resistance from RTOs/ISOs and transmission owners. In one such case in an eastern RTO/ISO, Pine Gate is developing a solar project that will interconnect to a transmission line on which much of the capacity is currently being used by a thermal generator that has committed to retiring in the near future. The RTO/ISO has determined that the interconnection of the solar project will cause an overload on the transmission line and therefore has allocated to the solar project tens of millions of dollars of network upgrades. However, once the thermal generator retires, the transmission line would no longer be overloaded, thereby eliminating the need for the costly network upgrades. Pine Gate has proposed that the RTO/ISO and transmission owner consider using DLR and Advanced Power Flow Controls as a means maximizing existing capacity on the transmission line and rerouting flows around the potential overload until the thermal generator retires. This would alleviate the need for the costly network upgrades and allow the solar project to come online much faster. Unfortunately, neither the RTO/ISO nor transmission owner has committed to seriously considering GETs as a potential solution.”

On the other hand, MISO says (in the same docket), "it would not be good utility practice to rely on ambient adjusted ratings or dynamic line ratings within the generation interconnection process”.

Docket No. AD22-5 Item E-1  FERC today launched an inquiry to examine whether the use of dynamic line ratings (DLRs), which are based on a wide range of weather and line-specific factors affecting the operation of electric transmission lines, would help ensure just and reasonable wholesale rates by improving the accuracy and transparency of line ratings.

Unfortunately, neither the RTO/ISO nor transmission owner has committed to seriously considering GETs as a potential solution.

Is this just a matter of misaligned incentives? How do other countries handle such issues?

Part misaligned incentives. Part lack of will to correct the situation by including newer technologies to reduce the backlog of generator interconnection projects.

Is this just a matter of misaligned incentives? Yes, it is a matter of renewables developers trying to skimp on building a robust transmission network for solar and wind farms by squeezing an existing network to the breaking point - using ambient temperature readings to "avoid potential overflows" caused by the inherent deficiences of their own generation.

Pine Gate Renewables should be forced to accept liability when existing transmission resources fail due to the unexpected demands of intermittent, unpredictable solar and wind. Transmission was built to handle stable, reliable generation - if Pine Gate can't provide it, repairs should be on their dime, not that of customers.

Bob - isn't transmission agnostic to generation and demand technologies? I am referring to this sentence in your reply "Transmission was built to handle stable, reliable generation".

So, penalize renewable energy on both supply side with the capacity credit and on the transportation side? In fact, renewable energy like any other energy pays for "firm" access to the demand by paying for those network upgrades, which are transmission projects needed to interconnect that renewable supply to demand.

"Most of [U.S.] grids were initially constructed in the early 20th century and were designed for a much simpler world where large, fossil fuel powered plants would deliver power in one direction only to consumers, located in high demand areas, most often cities....[however] complex energy flows require significant amounts of innovation and investment in redesigning our grid infrastructure, a crucial point often missed while renewable energy and EV growth grab the headlines."

Though grid infrastructure is inarguably overdue for maintenance, the grid is indeed ready for large power plants to deliver power to customers, where located in high demand areas or remote locations.

And that wasn't a mistake. In the 1880s and 1890s, when electricity was only available to consumers in New York City and Philadelphia, there were power plants on every block. Many companies provided power, each with its own voltages, plugs, receptacles, bulbs, and transmission. Sound familiar? It should - according to microgrid advocates, that's the energy of the future. And it was a mess: outages, fires, and explosions were common. Workers on poles snipping the lines of competitors, and other varieties of sabotage, were routine.

What followed were the grids constructed in the early 20th century. They weren't designed for a simpler world, though - electrical engineers had learned simpler designs were more reliable. They discovered large plants that delivered power in one direction could take advantage of economies of scale - they were more economical, and energy-efficient, than having a separate plant on each block. They discovered transmission, once a forest of lines and poles, could be shared. 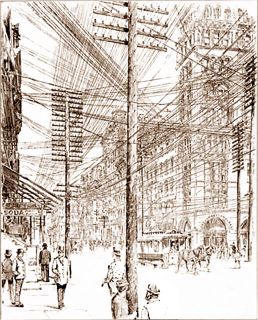 If returning to a more complex and expensive grid is necessary to save us, it's obviously worth the exorbitant expense of rebuilding America's grid. But are renewables even capable of saving us?

Though that premise is generally accepted as a given, it's anything but. It remains a question - one that the vast majority of climate experts would answer with a resounding NO. At best, renewables can dramatically reduce carbon emissions in a handful of countries with abundant hydroelectric, geothermal, and/or wind resources. Other than those three, there are no sources of renewable energy that have ever, nor will ever, provide more than 1/3 of the electricity in any country on Earth. Solar, a source available an average of 11% of every day? Not a chance - not even close. That means continued reliance on fossil fuels, which would make saving us from the worst impacts of climate change impossible.

If renewables are incapable of saving us, making grids ready for them is a waste - of time, energy, and money. That's an energy transition backwards.