The climate-neutral grid in 2045: What do the transmission system operators expect?

The new government is not the only one with ambitious plans for 2030. In their scenario framework 2023–2037 for electricity, the German transmission system operators also presented the electricity sector up to 2045 for the first time. In that year, Germany aims to be climate neutral. What assumptions do the grid operators make and what does the scenario mean for the energy industry? We want to explore these questions in this article.

Every two years, the German transmission system operators (TSOs) must submit an electricity network development plan (NDP) for the next ten to twenty years. The basis for the NDP and thus the necessary expansion and construction measures for the transmission grid of the future is the scenario framework that the TSOs published on 17 January 2022. Besides that the date also marked the start of the public consultation phase by the Federal Network Agency, which lasted until 14 February 2022.

In the course of the stronger focus on climate neutrality in industry, politics and society, the TSOs have not only developed a forecast up to 2037 in their latest scenario framework, but also scenarios for the power system in 2045. In that year, Germany is supposed to be climate neutral according to the current climate protection law. And thus, as a country, it has no longer any harmful influences on the climate system. In the further course of the NDP process, the corresponding measures for the grid expansion will be developed. However, here we will primarily focus on the statements of the scenario framework for electricity generation and consumption until 2045.

All in all, the TSOs have developed scenarios with different transformation speeds. Scenario A shows a higher use of (imported) hydrogen. In contrast, Scenarios B and C anticipate a pronounced and faster electrification of energy consumption. For the climate neutrality scenario in 2045, B/C coincide with stronger electrification. Figure 1 shows the classification of the different scenarios according to energy-related metrics. 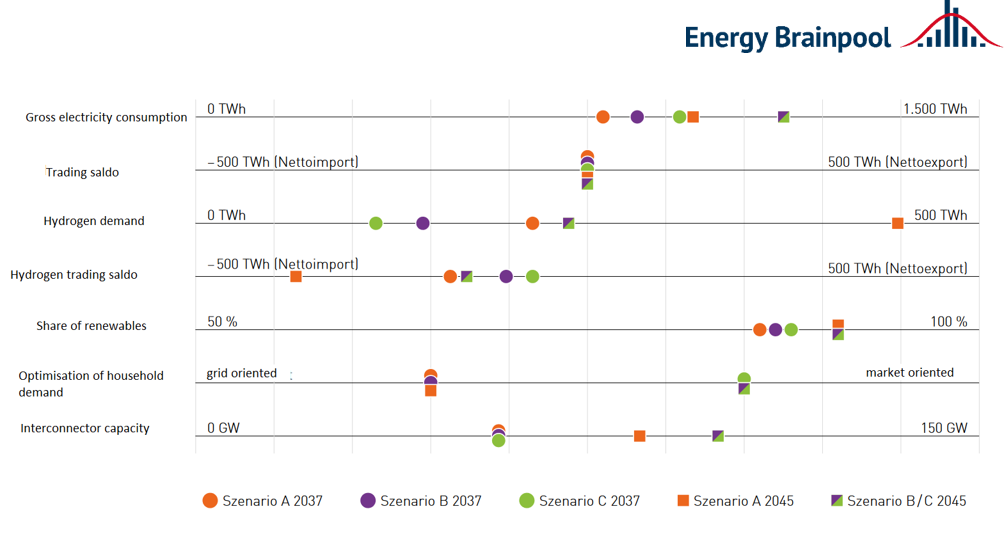 Figure 1: classification of the five different scenarios of the scenario framework for the NDP 2023-2037 (source: TSO).

As can be seen in Figure 1, the range between the scenarios with respect to certain metrics (such as hydrogen demand, hydrogen import/export saldo and the transmission capacity of cross-border interconnectors) is very wide. The following considerations compare Scenario A (conservative), Scenario C (progressive) for 2037 and Scenario B/C for 2045. Comparison with the current federal government’s goals and estimates for 2030 is also helpful in some cases.

The TSOs’ scenario framework makes it very clear that electricity consumption will increase strongly with ambitious climate targets and sector coupling. For example, consumption increases in all sectors due to direct electrification of processes in industry, but also the greater penetration of electric vehicles, heat pumps, and the use of electrolysers to produce hydrogen.

Figure 2 illustrates the increase in gross electricity consumption along with the differences between the scenarios. 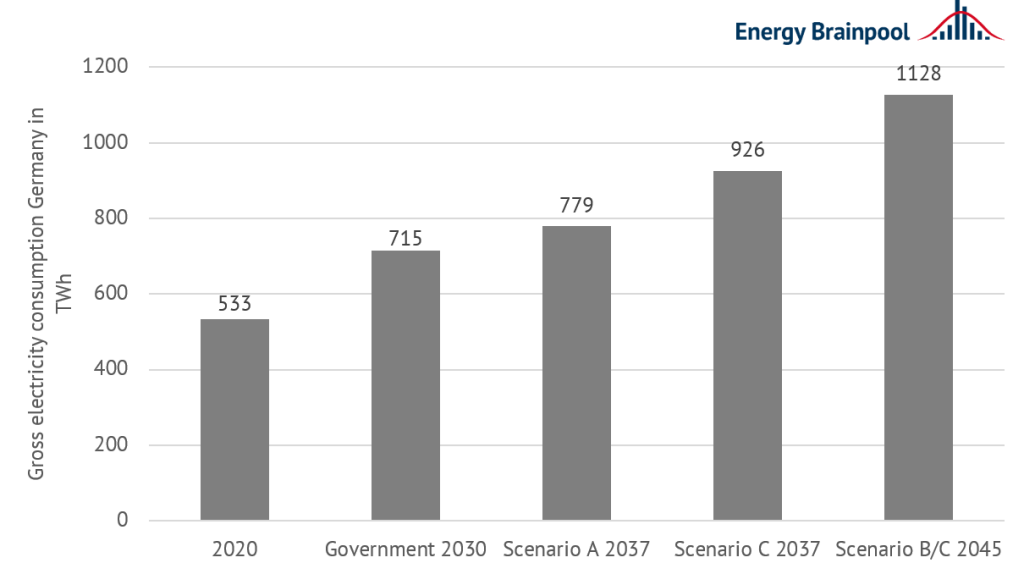 Already by 2030, the demand for electricity increases strongly from below 600 TWh today. The German government assumes a corridor of 680 to 750 TWh of electricity demand in 2030, with 715 TWh representing the mean value. The increase weakens by 2037 in Scenario A, which relies more heavily on imported hydrogen. However, the increase is substantial by 2037 in Scenario B, with over 200 TWh in 7 years.

What will happen in the transport sector by 2045?

One driver of additional electricity consumption is electric mobility, which experiences strong growth in the scenarios. Figure 3 shows the scenario framework’s assumptions for the number of all-electric passenger vehicles by scenario. 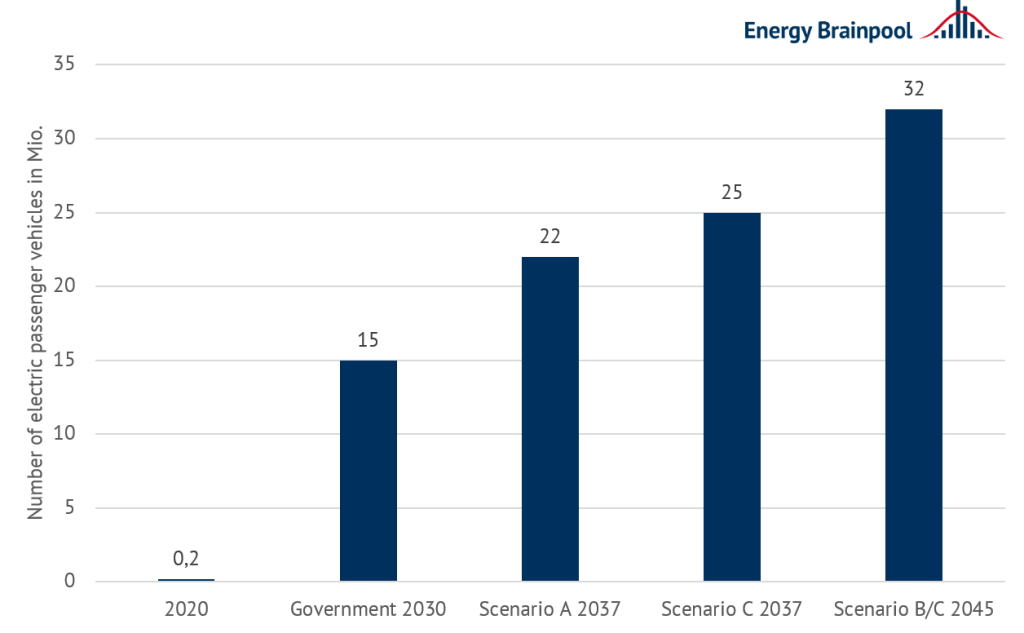 The targeted increase to 15 million e-vehicles by 2030 is ambitious, but necessary to achieve the climate targets by then. Therefore, the German government also sees the need for a massive increase in the share of electric mileage in the transport sector.

The TSOs’ scenario framework provides further relevant information on the transformation of the transport sector. For example, private cars consume only half of the electricity required in transport from 2037 onwards.

In 2045, the electrification of freight transport even accounts for more than half, with just under 90 TWh of annual consumption. Overall, electricity consumption in this sector rises to over 160 TWh, as Figure 4 shows.

Electricity consumption is also rising sharply in other sectors because of electrification. In particular, the generation of heat in heat pumps at the household level, but also the use of electricity in district heating, will increase electricity demand. The use of electrolysers to generate hydrogen increases strongly in the TSOs’ scenarios. Figure 5 makes this clear. 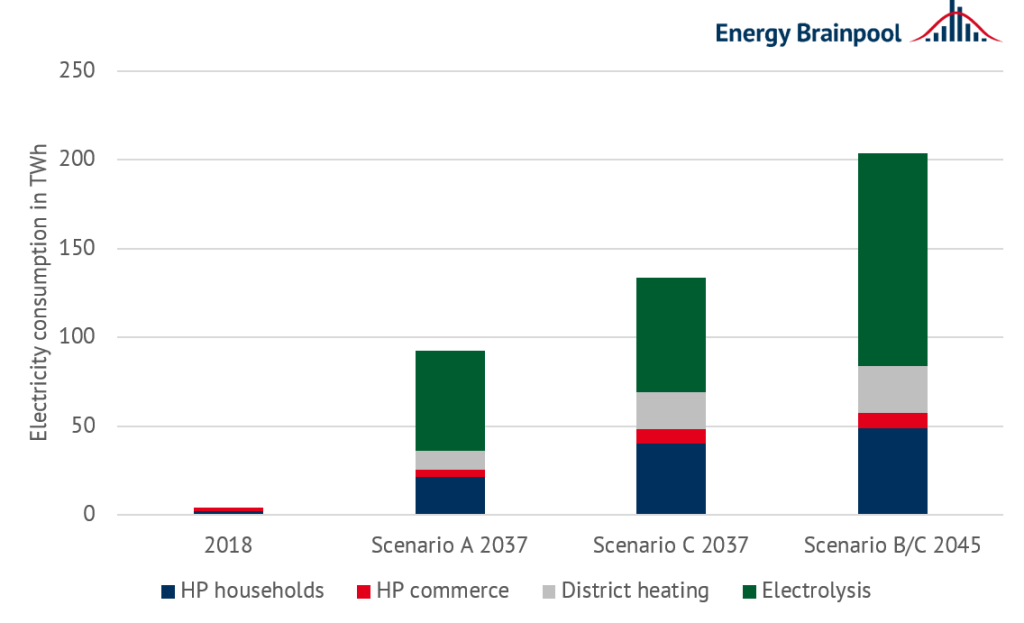 Figure 5: electricity consumption by electrolysis to produce hydrogen and in the heating sector by heat pumps (HP) and electrode boilers in TWh by scenario (source: Energy Brainpool).

In order for the increased electricity demand from sector coupling and electrification also leading to sharply declining CO2 emissions, the generation capacities of renewable energies must be greatly expanded (Figure 6). The German government and Economics Minister Habeck have already announced their targets for 2030 and are currently developing the appropriate measures to enable the necessary expansion. For more details, please read our article on the energy targets of the “traffic light” coalition. 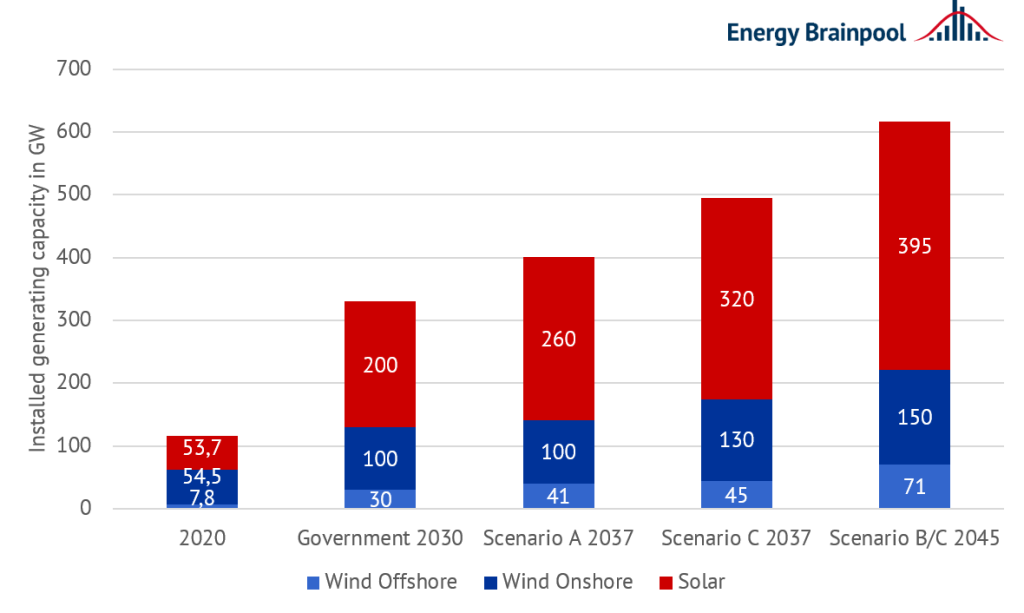 In Scenario B/C 2045 offshore wind generates 280 TWh while onshore wind and PV each contribute another 375 TWh. Renewables (including small amounts of hydropower, biomass, and biogenic waste) would then account for 91 per cent of electricity generation.

It will probably not be possible to achieve the annual climate targets until the year 2023, as the addition of renewables has fallen sharply in the past four years (source: PV Magazine). The new German government and companies must now set the course to ensure that the German energy system is largely based on renewable energies by 2045 and that Germany is climate neutral. This task can only be achieved by society as a whole.