The Canadian electrical grid is better interconnected with the US states south of the border than it is east-west between the provinces and north-south with the territories. The Canadian government has undertaking feasibility studies to determine the merits of strengthening the regional interconnections across the country in its efforts to decarbonize the grid by reducing emissions from electricity generation. Building transmission to interconnect the provinces and territories will be a major effort but are there benefits that justify the build? What are some of the advantages that our current electrical grid does not offer that stronger interties can untap? What are the regional business cases and who can benefit from them? This whitepaper will explore these questions.

Canada is in an enviable position with a largely emission-free source of generation with nearly 82% of the generation capacity being GHG emissions free. The following chart shows the Canadian generation fleet by fuel type as of 2014. In comparison to other countries around the world Canadian electricity sector is very clean. As much of the remaining coal generation is retired over the next decade, the GHG emissions intensity would further decrease giving Canada one of the cleanest sources of generation at over 90%.

This gives Canadian industries a major advantage in being able to produce goods at a lower carbon intensity in comparison to other major economies. For instance, the US electricity generation is almost 65% from thermal sources of generation as show in the chart below. 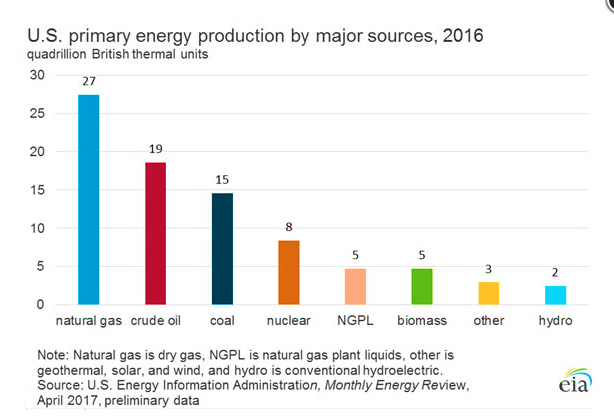 To improve on this ratio, many states are continuing to push for an increased share of non-GHG emitting sources of generation. In fact, since 2005 there has been a tremendous amount of investment in renewable generation as shown by the chart below. This trend is expected to continue with wind and solar being the primary sources of renewable generation that would get deployed. However, as the share of wind and solar increases on the grid their intermittent nature poses a challenge for engineers in being able to balance the grid and maintain system reliability by maintaining a steady supply despite the varying weather conditions from hour to hour and day to day.

To make this delicate balance work grid engineers need to back-up the intermittent renewables with dispatchable baseload generation to maintain a reliable grid regardless of if the sun is shining or the wind is blowing. This back-up capacity can come in the form of hydro, gas, nuclear or storage. While there is some potential for hydro in a few states namely Washington, Oregon, California and New York the scope for major developments is limited and it is not an option for all regions. The scope for nuclear is also not promising as the upfront costs to install a nuclear facility are steep and the perceived risks too great. The battery storage is still very expensive, and it has limited capacity to have a wide application. This leaves natural gas as being the primary option being deployed, even though it still has some GHG emissions albeit at much reduced rate compared to coal or oil. However, as the desire for carbon reduction plays a greater role in the new economy, the attraction for manufacturing and technology firms to be powered by non-GHG emitting power continues to get stronger. For example, the likes of Googles, Apples, Teslas and Ikeas of the world are opting to reduce their environmental footprints by investing heavily in renewable energy supply to their facilities. In fact, overtime there’s a real possibility that countries with greener grid may have a strategic advantage in attracting companies whether it is manufacturing, resource extraction or retail because of reduced carbon pricing burden. 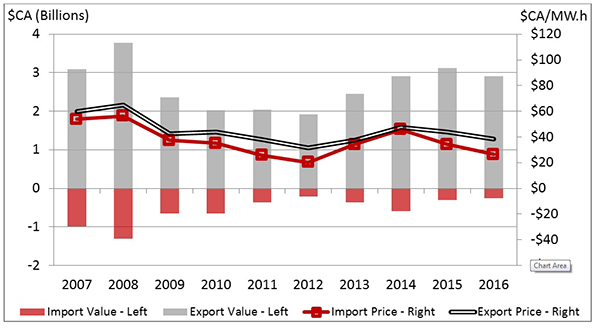 In fact, Canada already has strong grid interconnections with the United States. All the US bordering provinces have grid connections with export capability with the neighboring US states as shown on the map below. These interconnections have long been used for hydroelectricity exports from BC, Manitoba, Quebec and New Brunswick to the US or for grid stability in the case of Alberta and Saskatchewan. However, as Alberta, Saskatchewan and New Brunswick retire their coal fleets and bring in renewable generation there’s a major potential to export even more non-GHG electricity to the US. 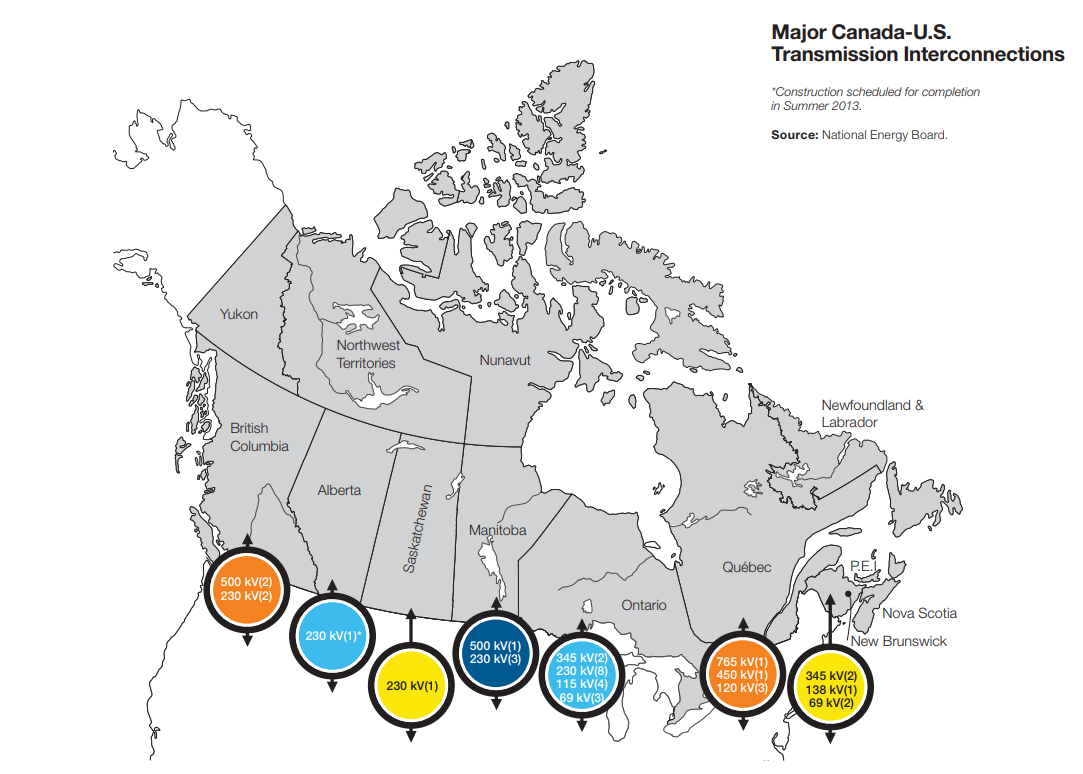 This potential gets amplified if the provinces develop strong interties between the hydro provinces and the provinces with wind/solar farms. By strengthening the two countries’ interconnections the intermittent US renewable sources can be backed with quickly dispatchable Canadian hydro. If the interconnection between Alberta-BC, Saskatchewan-Manitoba and between Quebec-Ontario and Quebec-New Brunswick are further strengthened the combined export potential of green and cheaper electricity can increase significantly from its current levels. This is especially true in the west where Alberta and Saskatchewan have the best wind and solar resources in Canada and BC and Manitoba have strong hydro resources. Both Alberta and Saskatchewan have set aggressive renewable energy targets for their electricity sectors; Alberta is targeting 30% renewable energy by 2030 while Saskatchewan is aiming for 50%. This is expected to attract up to several billions in investment to build 5,000 megawatts of renewable capacity in Alberta and 2,000 megawatts in Saskatchewan over the next 11 years. At its three rounds of Renewable Energy Procurement (REP) competitions in 2017 and 2018 the Alberta Electric System Operator (AESO) awarded contracts for 1,363 megawatts procured at a weighted average price ranging between CDN 3.7 and 4.0 cents per kilowatt-hour, a historic low in Canada. In Saskatchewan SaskPower is currently undergoing its own competition to procure new renewable generation to offset its coal plant retirements and meet its goal of 50% renewables by 2030.

There may be a real opportunity to go well beyond those targets by tying Alberta and Saskatchewan’s intermittent wind and solar with BC’s and Manitoba’s firm hydro. With stronger interconnections the abundant and cheap wind and solar resources in Alberta and Saskatchewan complimented with BC and Manitoba’s fast ramping hydro can be harvested to export a 100% renewable steady supply of electricity into the growing western and midwestern US states. Whereas hydroelectric dams can take more than a decade to develop at a high upfront cost, both wind and solar can be developed as quickly as within two years. This would help diversify the provincial economies that export large amount of thermal oil/gas energy to also export renewable energy and potentially pay for the costs incurred to further strengthen the provincial interconnections and to increase capacity of the interties with the US for increased export capacity.

Another potential that can be untapped is building North-South interconnections between the Canadian provinces and territories to increase the northern resource development potential while bringing reliable utility infrastructure and jobs to the northern First Nations communities. Currently, no electric grid interconnections exist between the provinces and Yukon, Northwest Territory and Nunavut.  The territories must rely on expensive, non-reliable and polluting diesel generation to meet their needs. This could be offset with reliable supply from the electricity rich southern provinces. There is also tremendous hydroelectricity potential in the north that has not been developed due to the lack of transmission line connections to the southern markets. If large scale hydro dams could be developed it would not only facilitate the resource extraction but also further increase the export potential to the US.

In addition to the export and mining potential there is also the added benefit of greater overall grid reliability, price stability, improving load factor and increased load diversity that a better interconnected grid provides. This positions Canada well for long-term competitiveness and energy supply.

In summary, strengthening the interconnections between the provinces and territories could be a win-win by increasing Canada’s non-GHG emitting electricity export potential to the United States. Interconnections will also help reduce the northern Canadian communities’ dependence on diesel and enable new resource development potential in northern Canada creating new job opportunities. All said, the benefits should outweigh the costs incurred to strengthen or build the grid interconnections.

There may be a real opportunity to go well beyond those targets by tying Alberta and Saskatchewan’s intermittent wind and solar with BC’s and Manitoba’s firm hydro. With stronger interconnections the abundant and cheap wind and solar resources in Alberta and Saskatchewan complimented with BC and Manitoba’s fast ramping hydro can be harvested to export a 100% renewable steady supply of electricity into the growing western and midwestern US states.

This is exciting-- is it the type of project that would be best suited by HVDC like is being explored in Europe, or is the tech already in place right and it's just about the markets and the regulatory framework?

Matt great question and you're right. Main challenge is in the regional regulatory and markets not technology. Electricity markets and regulations are a provincial matter in Canada, adding an international border in the mix makes it even more challenging. The technology is mature and readily available in HVDC to connect neighboring provinces, and even UHVDC (ultrahigh-voltage direct current) to connect beyond that such as from the Canadian Northern Territories into the US states.

HVDC is the way to go with these interconnects. The VSC technology can provide reliability necessities like voltage control, frequency control and blackstart. The biggest hurdle is logistics, acquiring right-of-way, getting siting and other regulatory approvals and just as big a hurdle, overcoming public opposition.  Look what happened to the 1000MW proposed Northern Pass HVDC project between Quebec and New Hampshire.

Agree John, good comments. Let's hope that.. where there's a need and a will... there'll eventually be a way. I hope Northern Pass will one day be a reality like the Manitoba–Minnesota Transmission Project currently under construction.

I think what may have to happen is the Feds to flex their muscle and override objections to help get the siting issues resolved. Let’s face it too many Americans have a very bad case of NIMBY-ism even if it is the overall right thing to do for society.

I think you're right John, treating it as federal trade negotiations between US/Canada may be a better place to move it forward. Do you think there's sufficient concenus between the New England states at on this?

Hard to say. The proposed 1000MW HVDC tie between Quebec and Maine is headed to state referendum.  That would be a good barometer of public support.  Then the litmus test will be what the state does with the results.

Thanks John, will be keenly watching that development to see how it moves foward