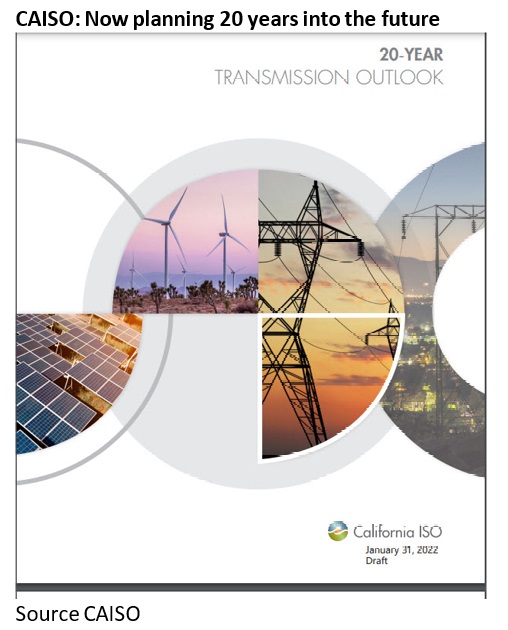 In late Jan 2022 the California Independent System Operator (CAISO) released a draft 20-year plan for a grid capable of supporting a more-or-less decarbonized electricity system in the state by 2045. CAISO estimates the cost of an upgraded high transmission network needed to accommodate additions of 120 GW of green power at $30.5 billion. It seems like a reasonable investment for a worthy cause.

While CAISO projects 33 GW of distributed solar by 2040 it doesn’t count behind-the-meter resources in its supply forecasts. 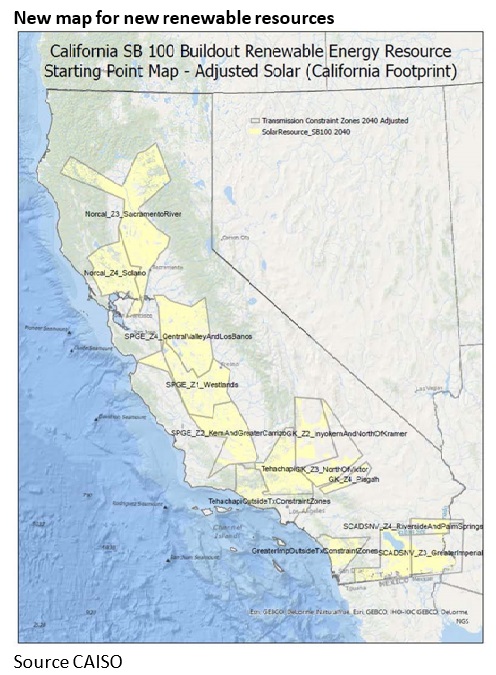 Among the big ticket items is a $11.65 billion line to connect to 12 GW of projected wind in Wyoming, New Mexico and Idaho, with another $8 billion to bring in 10 GW from California’s soon to be developed offshore wind projects. The remaining $10.7 billion is to expand and upgrade CAISO’s existing transmission network.

Peak load in the grid operator’s territory is projected at nearly 74 GW by 2040 with increasing electrification of buildings and transport. The peak load in the late afternoon is estimated at 66 GW in 20 years compared to the historic all-time peak of 52 GW.

The plan, which breaks from traditional 10-year planning horizon, projects a California peak load of 83.4 GW by 2040 – 28.5% higher than the one previously projected by the California Energy Commission – CAISO does not serve all of the state’s load. To meet the increased demand CAISO plans to bring more out-of-state wind as well as connect expected wind resources off the coast of California. It also projects a sizable increase in utility-scale solar projects, battery storage and some in-state geothermal resources.

Rooftop solar, while playing a supporting role – depending on how the net energy metering debate is eventually settled (article on page 17) – is not specifically addressed since it mostly impacts the distribution network, not within CAISO’s the purview.

The most significant issue in CAISO’s plan is the assumption that the state will in fact phaseout some 15 GW of natural gas power plants over the next two decades – as required under the current decarbonizations targets. These plants currently play a critical role in balancing supply and demand especially during the daily ramp up and ramp down of solar generation, as sun rises in the morning and sets in the evening. What will substitute for these plants and at what cost has been a hotly debated issue for some time. CAISO, however, a neutral party to that debate, is merely attempting to keep the lights on while meeting the various laws and regulations in place.

Another big issue facing CAISO and all other market operators is the long queues of renewable plants waiting to be connected to the grid. CAISO’s plan is to minimize the waiting times to be connected. It says, “This transformation will not only drive significant investment in a technologically and geographically diverse fleet of [generation] resources, including storage but also significant transmission to accommodate all the new capacity being added.”
During 2021-22 alone CAISO has had to accommodate 24 transmission projects totaling $2.9 billion, compared to the $217 million average over the last 5 years. This ramp-up in transmission investment represents a “transition to expected additional growth” in future years. CAISO’s CEO Elliot Mainzer, said, “There is a critical need for more proactive, long-term transmission planning and coordination.” 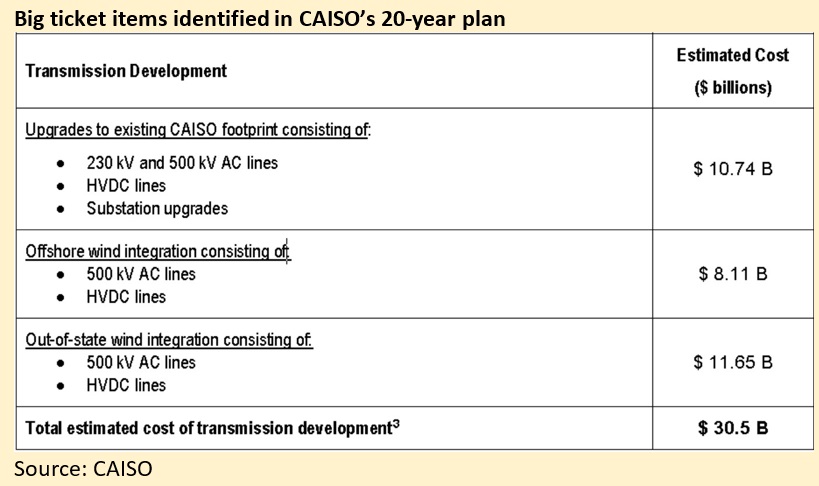 In the draft plan, CAISO notes, “The need for new generation over the next ten years has escalated rapidly, driving an accelerated pace for new transmission development in this and future planning cycles,” in the context of the “escalating need” to decarbonize the grid, support widespread electrification of transportation and other industries, and maintain system reliability while facing the retirement of two remaining nuclear reactors and the need to phase out the fleet of gas-fired  power plants, which provide a much needed service especially during the 4-9 pm period when solar resources vanish.

Working closely with the California Energy Commission (CEC), California Public Utilities Commission (CPUC) and other stakeholders, CAISO’s long-term plan aligns generation and transmission planning, resource procurement and interconnection queuing while “… strengthening interconnections with our partners across the West,” he said. 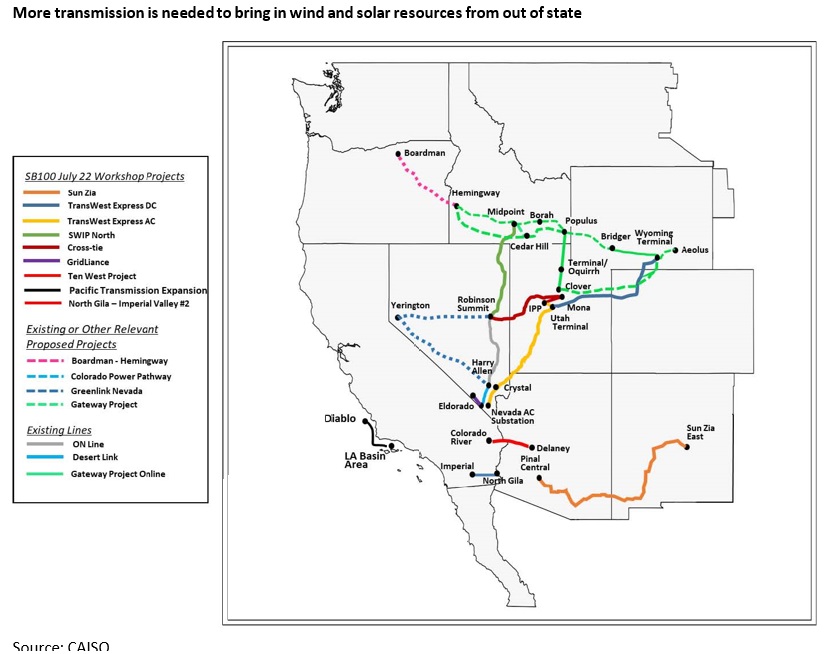 As with any planning document, CAISO’s 20-year plan – it is a draft – has received mixed reviews with some taking issue with the plan’s $30.5 billion price tag while others welcoming it for providing a blueprint for accommodating 60% renewables by 2030 and 100% by 2045, as required by California’s Senate Bill 100.

Commenting to CA Current, California Energy Commission’s Karen Douglas said, “I applaud the tremendous efforts of the CAISO staff and leadership in putting this timely 20-year outlook forward.” Likewise, Jan Smutny Jones, Ex. Dir. Of the Independent Energy Producers Association said, “The CAISO 20-year plan is an important tool preparing for our future needs,” noting that the investment will be paid over many years and “no doubt, change over time.”

Some critics believe that the state should put more emphasis on more efficient utilization of resources while encouraging localized distributed generation, which does not require so much transmission investment. Woody Hastings, Energy Program Manager of The Climate Center, told CA Current that “The state can reduce the need for, and the huge costs associated with, transmission upgrades if we adopt policy reforms that harness decentralized, local solar and energy storage assets, both private and public,” noting that the state regulator, the California Public Utilities Commission should reform utility compensation to motivate them “to collaborate in good faith for distributed clean energy deployment.” Given a chance, the state’s 3 large investor-owned utilities would love nothing more than invest in transmission lines.

When do you think this need for greater transmission to allow more renewables to take hold to shift from a state/reginoal conversation to a more national one? The state vs. federal regulation makes it a tough area to navigate, but surely it would be more fruitful to have the planning take a more national and comprehensive view, wouldn't it?

Adding Battery Storage will cover the duck curve times in the evening. Just contact Tesla Energy and you will be all set.

QUOTE=The most significant issue in CAISO’s plan is the assumption that the state will in fact phaseout some 15 GW of natural gas power plants over the next two decades – as required under the current decarbonizations targets. These plants currently play a critical role in balancing supply and demand especially during the daily ramp up and ramp down of solar generation, as sun rises in the morning and sets in the evening. What will substitute for these plants and at what cost has been a hotly debated issue for some time. CAISO, however, a neutral party to that debate, is merely attempting to keep the lights on while meeting the various laws and regulations in place.