The Biggest Challenge for Offshore Wind Apart from the installation and maintenance in harsh conditions, and components needing to withstand extreme weather, the biggest challenge with offshore wind is bringing the power to the shore and to the grid.

With an offshore wind capacity of 22,072 MW from 5,047 grid-connected wind turbines across 12 countries, Europe is on top of its game for offshore wind energy. Even with an expected 30% slow down in wind energy installation this year owing to COVID-19. Integrating the offshore installations seamlessly with the grid in critical for continued expansion of offshore wind power.

As of 2019, there are  39 voltage source converter-type High Voltage Direct current (VSC HVDC) systems globally that have been running since 1999. And the markets are just opening up. Greece, for instance, is gaining a lot of interest these days with it opening up more offshore energy transmission systems.

HVDC is popular because it is a problem solver. It addresses the technical snag affecting this offshore wind transmission - energy loss because of long cables. Though electrical power generated as AC power and is used in the form of AC, wind farms at sea or far from the mainland depend on HVDC as it does the job better than HVAC (high-voltage alternating current).

Edge of HVDC over HVAC in transmitting bulk power

In a conventional HVAC transmission line, there is a limitation of distance covered, as it should be break-even distance. HVDC transmission lines aren’t limited by breakeven distance. There is also the fact of fewer conductors required that brings the overall cost down. In the HVAC system, energy is transmitted in the form of three-phase AC power, with two conductors needed at max. Fewer conductors also result in the smaller size of the towers, which again makes for lesser tower cost.

Maintenance and Safety of Long Cables 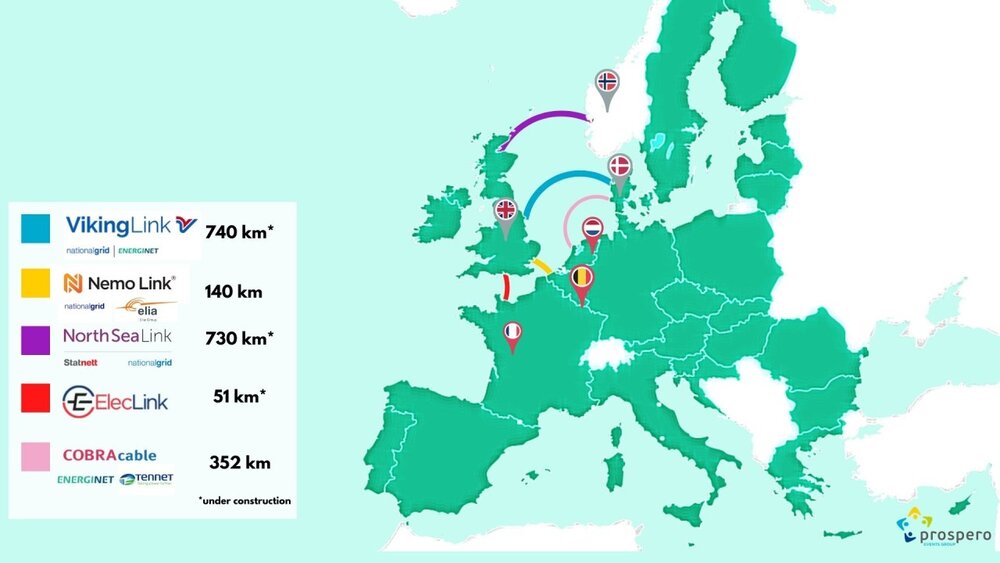 In terms of sheer length, the Viking Link (Energinet, National Grid) is the undisputed winner as of now, covering 740km on completion in 2023. Then there is the North Sea Link (NSL) that connects UK and Norway in a 730km-long subsea HVDC owned by Statnett and National Grid which on completion in 2021 will connect wind farms and offshore oil and gas platforms. Both these lines on completion are longer than NorNed (580 km) the current longest submarine power cable in the world. The other much-awaited COBRAcable connecting Denmark and Netherland (Energinet, TenneT) is 325 km long.

Though HVDC cables are better for long-distance transmission of energy with less energy loss, maintenance and service could be a pain. There is also a question of whether there are any environmental implications of laying down long HVDC cable.

The cost of the North Sea Link project is €2 billion

Is it future-proof technology?

Recently the UK government realized that their current approach to building and designing offshore transmission is outdated for its big ambitions of targeting from 30 gigawatts to 40 GW by 2030. Also, is the power grid maturing along with the transmission system? The recent case of Germany, where its grid was too weak to handle all the renewable power generated offshore, is a sign that it may not be so.

As with any complex projects, there is a massive amount of detailed design work, system studies, risk assessments and planned supply chain and maintenance detailing. We have already covered some fault clearing strategies for making your HVDC reliable.

The Cost of Downtime

The unplanned outrage of the Western Link HVDC. The Western Link brings renewable energy from Scotland to Wales and England through a subsea cable more than 300km in length. It went down and remained offline for 18 days at the onset of this year. The incident resulted in National Grid ESO fork out £31 million by Balancing Mechanism payments for its wind farm operators. With more subsea cables planned soon, what can you do to mitigate issues?

The Case of Interconnectors

Though interconnectors make a meshed grid a reality, it is not seen as lucrative by many. Case in point, the 1GW BritNed interconnector. It earned a profit of €111 million; a profit margin of 50%.This business case can’t be a global example since profit margins fluctuate based on electricity prices. Other than the complex technical side of interconnectors, there is also the multinational compliance approval it requires.

Interested to know more about the best-practices in offshore power transmissions, cabling and HVDC links?  Join me at Offshore Power Transmission and HVDC 2021 to gain insights with our unique long peer-to-peer interaction model. Carl Erik Hillesund, Head of Cable Department, Statnett, is one of the leading names present who will share his insights on Offshore HVDC systems from a subsea power cable perspective.

Originally published at: The Biggest Challenge for Offshore Wind

"Apart from the installation and maintenance in harsh conditions, and components needing to withstand extreme weather, the biggest challenge with offshore wind is bringing the power to the shore and to the grid."

Some believe we can use batteries, or hydrogen, to store enough energy so that the wind might provide a steady supply of clean electricity. Proving that's viable is Step #1 - because if it isn't, we're wasting our time and money.

Hi Bob, Renewable energy sources for sure need to work in conjunction with large-scale energy storage systems to make the grid free of fossil fuels. This is the case with offshore, onshore or solar energy. Here I am discussing offshore wind energy specifically. Though no energy source can be discussed in isolation, my attempt is to look at the specific challenge of offshore transmission.

There's a simple solution to this that's commercially profitable and therefore needs no state / federal intervention: connecting through large-scale long-duration electricity storage. With it, you could connect (say) 300MW wind through a 100-150MW grid connection (or 600-800MW solar through the same). Put another way, if you already have renewable generation with a grid connection, you can greatly increase the amount of renewables connected through it.

This reduces the capex (grid connection and reinforcement) costs owing to the reduced grid connection size, and eliminates both the opex (annual grid access charges) and trading (levies and charges per MWh) as the storage would bear those. Correspondingly the storage would eliminate its grid connection capex by piggy-backing on the reduced-size grid connection, and eliminate the levies and charges element of the price of the electricity it buys: win-win. And there's a third win: all large-scale long-duration storage is naturally inertial, and Storelectric's can deliver this natural inertia (and related voltage/frequency regulation, reactive power/load, phase-locked loop protection etc.) 24/7, greatly enhancing grid stability. Win-win-win.

For the time being it's confined to using salt caverns (many locations around large swathes of N America, Europe and world-wide); when the first few are built, other geologies will be developed too.