The State of Summer 2021 Resource Adequacy in the West

The August 2020 Heat Wave event and loss of load in California occurred just six months before a cold snap plunged the West, from Washington to Texas, into deep snows, stinging cold, and widespread power outages. The Pacific Northwest weathered another heat dome last month, and questions abound about what will happen in August and September regarding the ongoing drought, the competition for water resources, and potential hydrogeneration problems. 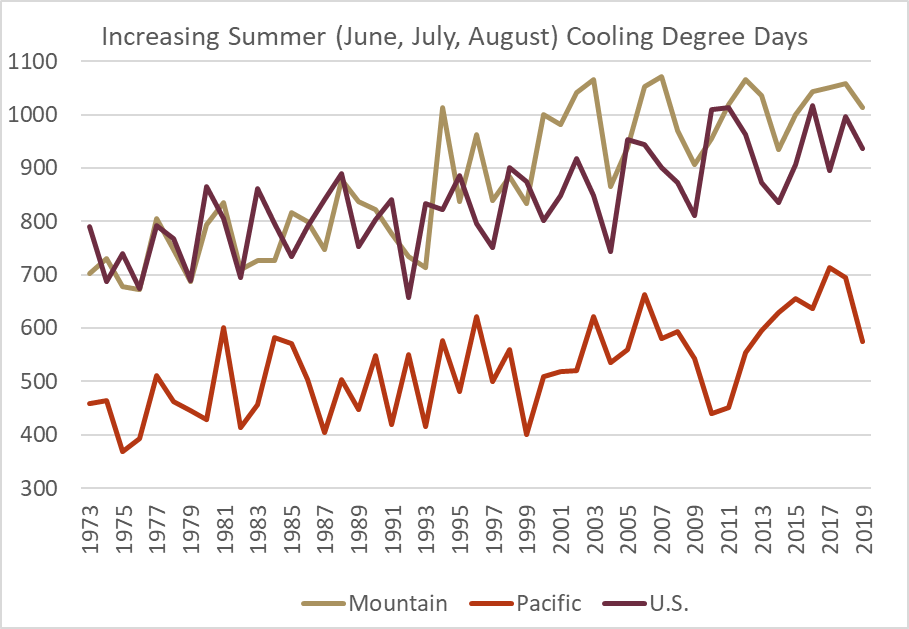 Cooling degree days (CDDs) are a way of measuring the magnitude of temperatures hot enough to warrant turning on air conditioners. CDDs continue to rise across the Western Interconnection, along with the risk of prolonged heat waves, warmer and wider than the historical averages. Under the umbrella of increasing rates and widening breadths of extreme, record-breaking weather-related events impacting the bulk electric system, the Western Electricity Coordinating Council (WECC) as part of the North American Electric Reliability Corporation’s annual Summer Reliability Assessment, evaluated a probable range of possible risks to the West’s expected summer reliability.

WECC’s key findings indicate the West is in a reasonably secure position going into summer under expected conditions with existing and anticipated reserve margins. However, some regions are in less secure positions because extreme conditions like high demand, low availability, or a combination of the two – as has been seen to occur lately, repeatedly, will make it difficult for them to meet adequate planning reserve margins. Due to recent events, many systems across the West are shoring up new resources to prepare for a wider range of possible scenarios.

In addition to the heat wave threat, local, short-term operational problems caused by wildfires have, and are likely to continue to occur if seasonal wildfire forecasts are correct. Generally though, because the transmission system is spread out, outages due to wildfires are not widespread. Similar reliability issues are as prevalent now as they were in 2020.

These ongoing summer reliability issues in the Western Interconnection, which may indicate new normals, include: First, the increasing likelihood of extreme weather leading to reductions in available assistance across the interconnection. Next, a growing need for more flexible resources in the sub regional portfolios as renewable resources fluctuate and as fuel availability is stressed. Finally, large wildfires coupled with prolonged dry seasons could continue to lead to the loss of transmission lines either directly affected by fire or by removal from operation to avoid being damaged by or starting fires.

Given the expectations of higher-than-normal temperatures and risk of above-normal significant fire potential, it is important to assess the summer period under extreme conditions. This is done through WECC’s probabilistic work.

The following charts show a starting point on the left of “anticipated resources,” then incremental reductions due to differing scenarios. The first two reductions are due to “Typical Forced Outages” of baseload resources. The next four reductions are probability scenarios showing impacts to different resource types. The first of these, “Extreme Forced Outages,” is another reduction to baseload resources. The “Low Wind,” “Low Solar,” and “Low Hydro” scenarios reduce anticipated resources with a typical forced outage due to low wind, or solar, or hydro, moving from a 1-in-2-year expected level of output to a 1-in-10-year output. The final scenario, “Extreme Combined,” sums up all scenarios to its left to see whether the sub-region would meet load and continue to hold adequate operating reserves, shown by the dashed line, if all resource types were affected by extreme conditions simultaneously. This would be an extreme case. The final two bars show the expected net internal demand for the peak hour of the summer and the peak hour demand under extreme conditions, moving away from the 1-in-2 expectation to a 1-in-10 chance level of demand. 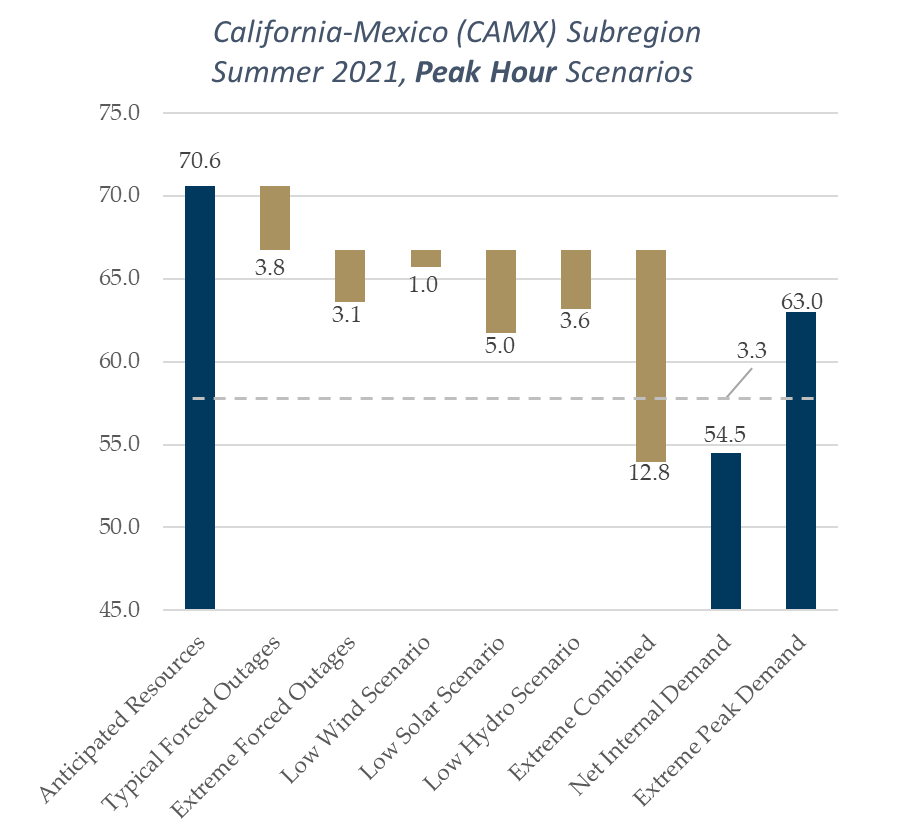 For the peak demand hour, the California-Mexico (CAMX) sub-region’s expected demand, plus operating reserves, would be 57.8 GW, which would be covered by the anticipated resources, enduring typical forced outages, expected to provide 66.8 GW of capacity. If only one extreme resource scenario were to happen, CAMX would still be able to meet expected demand and hold operating reserves. Even with an extreme peak demand, the area is expected to have enough resource availability to meet demand, though, it could become short on reserves in this case. However, if any combination of the scenarios were to occur simultaneously, CAMX would need to rely on external assistance to meet demand. While relying on imports is common, the expanding geographical impact of recent heat waves indicates potentially declining resource availability in tangential sub-regions for sufficient imports during times of need.

Although WECC’s assessment of summer reliability mostly focused on the peak demand hours for each of the sub-regions, it is also important to study the highest risk hours of the season, for instance, during the net peak hours. 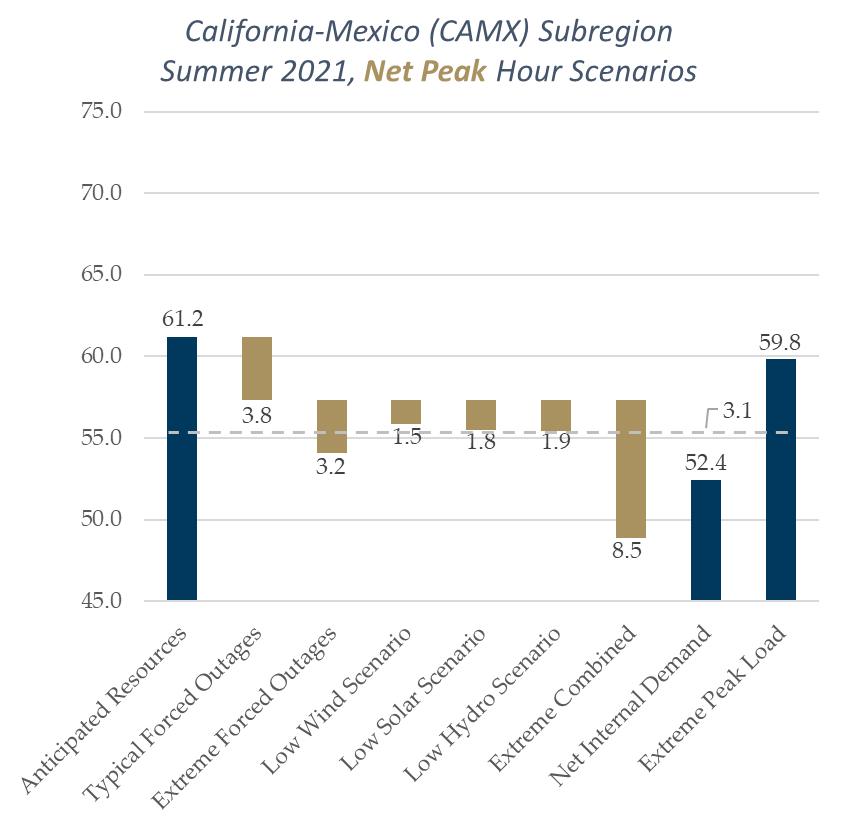 Net peaks occur when the demand may not be at its highest point in the day, but solar resources are waning due to the sun setting, and other resources need the ability to ramp up quickly to fill the gap. Taking the CAMX sub-region as an example again, during summer, this occurs two hours after the expected peak demand hour at 7:00 p.m. The risk is greater in this hour because solar resources are no longer generating at the same levels as they were in the middle of the day. The anticipated resources for this hour are much less than the peak demand hour because of the loss of solar resources. Looking at the resource scenarios, the biggest driver of not being able to meet demand and hold operating reserves is the extreme forced outage scenario, with 3.2 GW out of service. This is due to the sub-region needing to rely more on baseload resources at this hour. Even with anticipated resources (61.2 GW) and typical forced outages (taking offline -3.8 GW), the sub-region cannot meet an extreme peak demand (59.8 GW) for this hour and would need to rely more heavily on external assistance.

At the 50th percentile of expected conditions, WECC and its entities foresee no reliability impacts originating in neighboring assessment areas, sub-regions, or across inter- and intraregional areas. Many of WECC’s entities participate in localized sub-regional reserve sharing groups, such as the Southwest Reserve Sharing Group and Northwest Power Pool in which participants share contingency reserves to maximize generator dispatch efficiency, in addition to the economic efficiencies gained by the California ISO and Western Energy Imbalance Market. Furthermore, individual entities perform their own special operating scenarios to study potentially challenging seasonal operating conditions.

That said, issues like steadily swelling CDDs across the West, worsening drought forecasts, increasing risk of wildfires, and pressure on systems to meet higher demands during record temperatures pose concerns for reduced import capabilities during extreme events that tighten resource availability. These issues also highlight the growing need to add flexible resources to meet the net peak demand hours during this summer season, into September, and perhaps the next few summers to come.

Such an important topic, thanks for sharing Amanda. Assessing the upcoming summer and ensuring reasonable reliability is paramount, but as you note at the end there are ongoing issues that are threatening to increase load / decrease supply in future summers. How is WECC and others like it able to balance the need for action and improvements today with steady ongoing focus on long-term solutions to those future issues?

Thanks for your interesting post. You didn't say much about low hydro caused by low levels of water in reservoirs, etc? Is that part of your modelling? What would be the ongoing challenges?

On the other extreme, various places including Germany, Russia, UK and China have been suffering unseasonal rainfall and then floods, which have put stress on utilities (lines out, etc, transport affected). Is this something the WECC faces or is that unlikely given your location?

Great questions! Thank you Julian - WECC models a range of resource availability scenarios, spanning probabilities for every hour from the 3rd to the 97th percentiles. When looking at a low hydro scenario in the charts, it is representing a 1 in 10, or 10th percentile hydro resource availability level. Looking at the net peak hour, if low hydro is isolated, then availability is expected to drop by 1.9 GW, from 61.2 to 59.3 GW. This would be enough to cover expected demand at that hour (52.4 GW), however it would not be enough to cover an extreme peak demand event - a 90th percentile of demand at 59.8 GW. The likely impacts would be increasing scarcity of importable energy.

I love that you asked about the dangers of flooding in the West, too. There have been some significant floods and landslides in the past throughout the West. And there's a connection to wildfires - some flooding occurs or is worsened due to rainfall on an area recently burned. The U.S. Geological Survey explains it best:

"Post-fire landslide hazards include fast-moving, highly destructive debris flows that can occur in the years immediately after wildfires in response to high intensity rainfall events, and those flows that are generated over longer time periods accompanied by root decay and loss of soil strength. Post-fire debris flows are particularly hazardous because they can occur with little warning, can exert great impulsive loads on objects in their paths, and can strip vegetation, block drainage ways, damage structures, and endanger human life. Wildfires could potentially result in the destabilization of pre-existing deep-seated landslides over long time periods." (usgs.gov)

Furthermore, I'd point to checking out information on the California Megaflood of 1862 in the Central Valley, also affecting Oregon and Nevada. The storms that brought the floods have been attributed to locally higher than normal temperature anomalies.

For planning purposes, the potential operational issues of flooding that you described are similar to those endured by earthquakes - knocked out power lines, transmission and distribution remediation, or loss of generation. These types of catastrophes tend to be rare enough that they fall beyond the usual ODITY threshold of one day in ten years. However, as the climate changes, the effect of extreme events on the probability distributions for demand and resource availability will require regular updates in order to reflect the new normals, potentially skewing the bell curves to one side or the other, or widening them to include evermore extreme tails.