Please have a look at this joint report by the World Economic Forum and McKinsey & Company.   While it may be hard to swallow by readers who embrace one form of technology or another as the answer to our climate crisis, it is worth considering Natural Climate Solutions (NCS) as part of the answer to the problem.  (All bold is mine.)

I must admit that I hesitate to recommend anything from McKinsey since their involvement in causing the opioid crisis.  Nevertheless, it is hoped that this article helps to make NCS palatable to Energy Central readers as real and highly effective carbon reduction initiatives.

An Energy Central reader may well ask what this has to do with decarbonization of our energy industries.  The answer, I think, lies in our “developed” societies´ relationship with “developing” societies.  NCS addresses possibilities for climate change management in those places where continued destruction of the ecosystem will more than cancel out all of the decarbonization that is accomplished in developed countries. And,  the developing areas are still moving toward exactly what developed countries are trying to reverse: Habitat destruction and carbon intensive electricity, especially peatland and rain forests, and coal use.

We in the «developed» world tend toward a technical solution to reducing the carbon footprint of what we do as a society. And while decarbonization in Europe and the US is necessary, it won´t get the world to where it needs to be with respect to net CO2 emissions without, at least,  preservation of the crucial carbon sinks that still exist.

The crux is this. We face:

«...two environmental crises—a changing climate and nature loss—(and they are) are inextricably linked and compounding.»

«Natural climate solutions (NCS)—conservation, restoration, and land-management actions that increase carbon storage and avoid greenhouse-gas emissions—offer a way to address both crises and to increase resilience as the climate changes.»

In fact, as argued in this report:

«...there is no clear path to deliver climate mitigation without investing in nature. Climate action requires both the reduction of emissions and the removal of carbon dioxide already in the atmosphere. NCS can help with both, starting today.»

Here is the argument:

«...NCS projects could yield nearly a third of that target, or close to 7 GtCO2 per year by the end of this decade—mainly from avoided deforestation and peatland impact, reforestation, and soil sequestration in agriculture. It also shows that NCS, and in particular forestry projects, are largely a low-cost measure.»

So, build all the renewables and/or nuclear plants that you dream about. But that alone will not solve the problem, unless at least the CO2 release from deforestation and peatland is prevented, as indicated here: 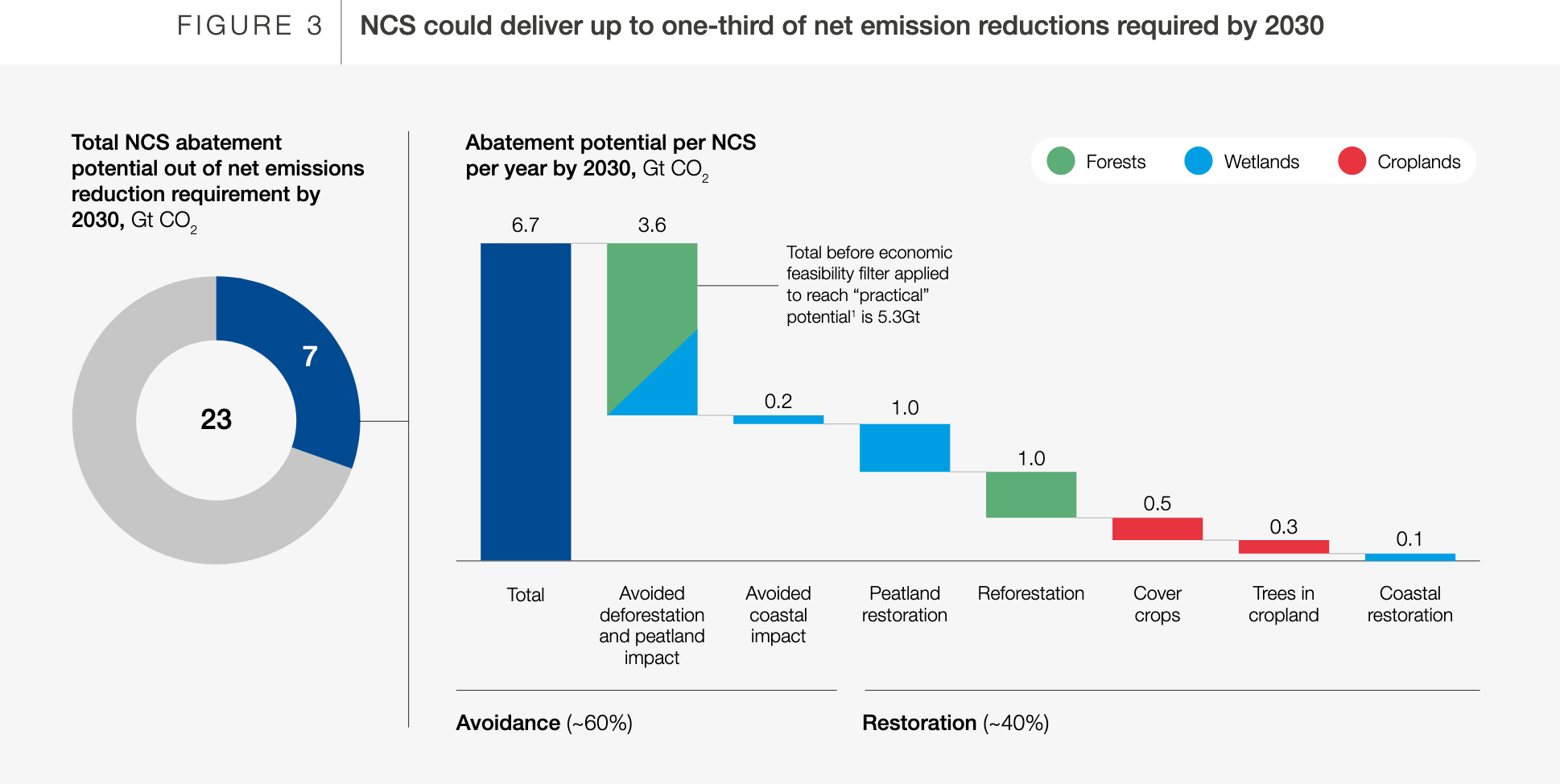 As described in this article:

«Worldwide, the remaining area of near natural peatland (>3 million km2) contains more than 550 gigatonnes of carbon, representing 42% of all soil carbon and exceeds the carbon stored in all other vegetation types, including the world’s forests.»

This is what is called climate capital.  We ignore it at our great peril.

«Yet the ambition to undertake NCS at global and meaningful scale is bedevilled by a number of difficulties, both real and perceived. These difficulties include the lack of consensus on how to treat NCS in corporate claims on climate action, combined with low public confidence in the effectiveness of past NCS schemes in contributing to real emissions reduction. There is a widespread suspicion that companies may be tempted to use NCS offsetting as an excuse to avoid fully addressing their own carbon footprint, despite clear guidance that direct emissions avoidance and reduction by corporations must be the priority.»

Don´t be fooled by data such as this: 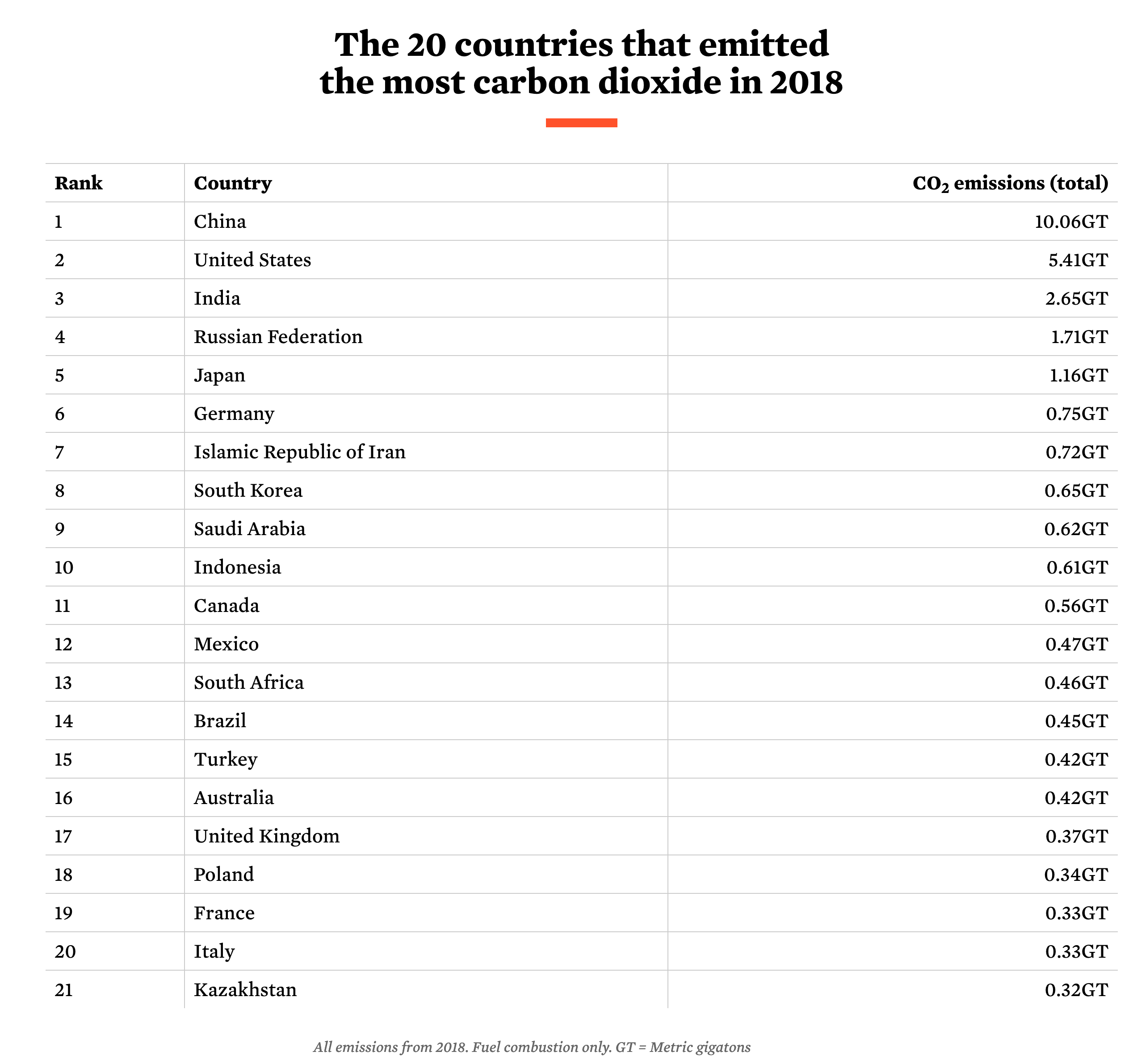 See the fine print at the bottom. “Fuel combustion only”.   Yes, Indonesia emits far less CO2 than the US or China via fuel combustion.  But, the figures do not include emissions which result from forest or peatland destruction, much less further potential destruction. (Nor do the figures include GHG emissions such as methane.)

So “fixing decarbonization” in the “first world”, whether by renewables, nuclear, conservation or a combination, will not solve the problem.  It has to be done in such a way as to make the same possible in both the developed and developing world, first by preventing massive CO2 releases and, concurrently, providing more electricity from low carbon power.

This map of the potential areas for NCS indicates its congruence with a great deal of the area where there are increasing carbon emissions from fuel: 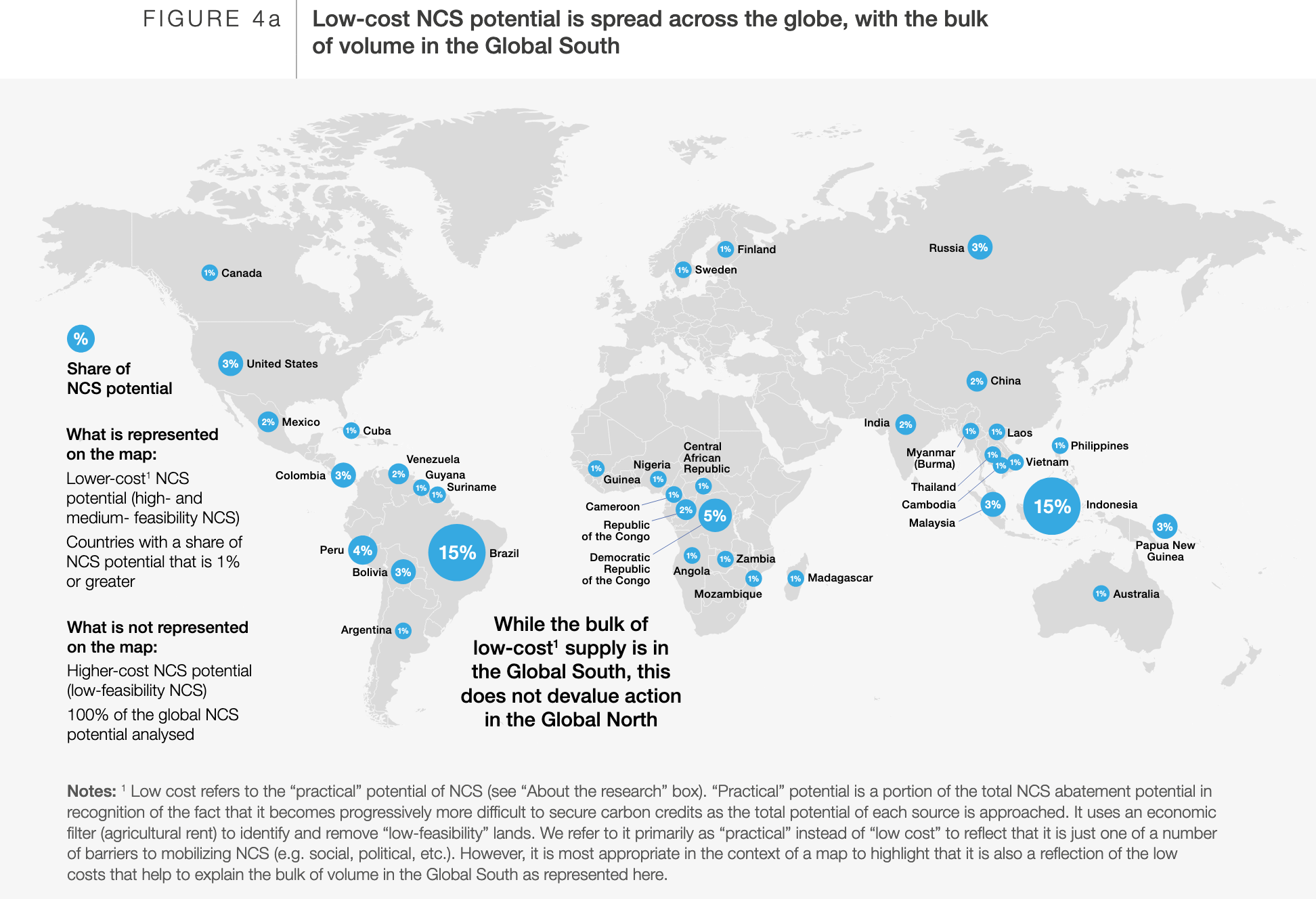 Of course, who trusts corporate sponsored NCS initiatives?  That is what is addressed here:

«...this report lays out some key actions to overcome existing bottlenecks in NCS carbon markets and create certainty for buyers, suppliers and regulators."

"One possible approach involves a company using carbon credits to compensate for its entire footprint today, as an interim measure while on a transition pathway towards net zero.»

«During the UN Climate Change Conference COP25 in Madrid in December 2019, 32 countries joined forces to call for high-ambition and high-integrity international carbon markets. The 11 principles, known as the San José Principles, outline the minimum requirements to achieve integrity of the carbon markets, which include ensuring environmental integrity, avoiding double counting, and using publicly accessible market infrastructure.”

The IFC (International Finance Corporation) also includes protection of carbon sinks in its metrics and principles for climate change activities:

This WEF/Mckinsey  report sets out an action agenda, describing some of the challenges and potential solutions, in order to accelerate the scale-up of NCS with markets as the foundation.  Please consider it.