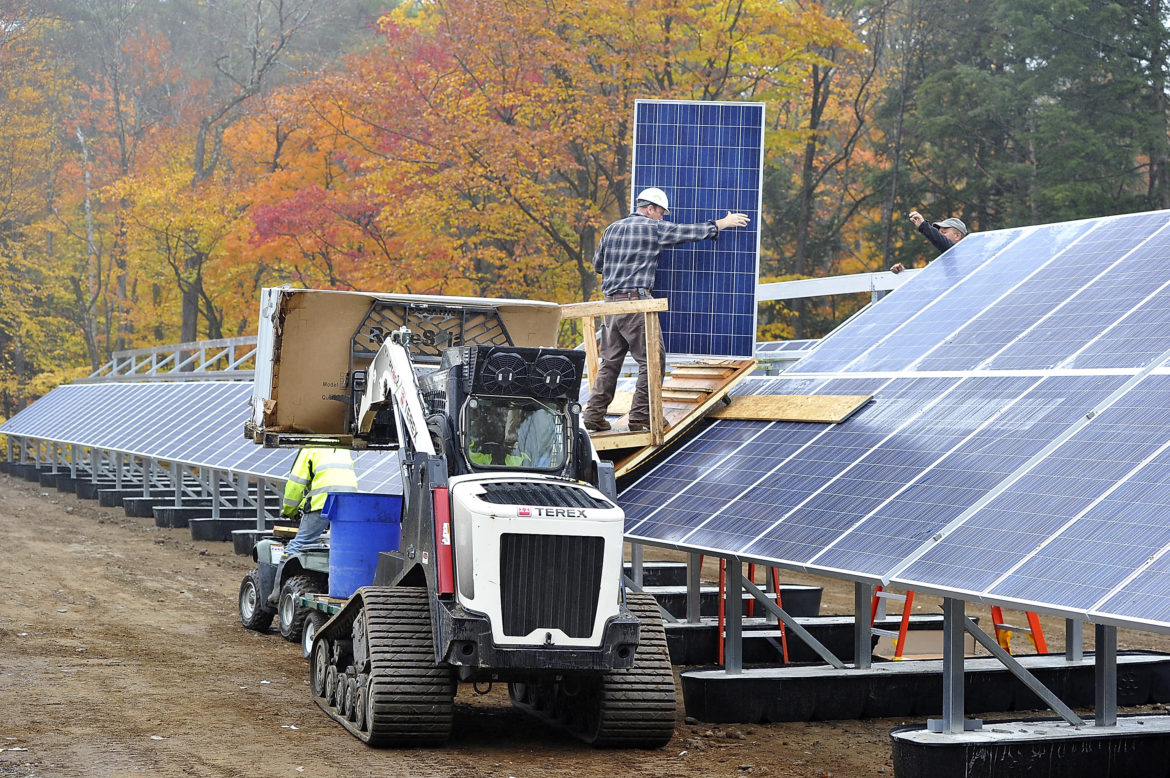 A looming shortage of transmission capacity is threatening to dampen momentum toward Maine’s renewable energy goals.

Developers and transmission experts, however, say the grid may not have capacity for the anticipated surge in new generation in the coming decades. And since transmission projects can take years to plan, permit and develop, the state faces urgency to begin addressing expected constraints now.

Complicating matters is the regional nature of transmission planning, which requires collaboration among legislators, state and federal regulators and utility grid operators.

Fowler said the company found a “sweet spot” for transmission for its planned 100 megawatt solar project in coastal Hancock County, but the company expects that finding prime sites in the future will be more challenging.

The project is one of 17 large projects recently awarded contracts under a state program to jumpstart progress toward its renewable targets, which include 80% renewables by 2030. Of the 15 new projects, accounting for just over 500 megawatts of capacity, 14 are solar and one is wind.

Also fueling development is another new state law that lifted restrictions on size and location for net metering, opening the door for commercial and industrial customers to participate.

“That was really key for our business,” said Jared Connell, vice president of project development at Borrego Solar, which has 12 projects totaling 82 MW planned in the state.

Maine is a big state with ample space, making it a prime real estate opportunity for solar developers. This is especially true in the central and southern regions of the state. Those are the most populated and affluent areas, and the grid infrastructure is more robust and modern. Almost all of the new large-scale projects are in that region, and developers said they see most of the small-scale opportunity there, too.

Modeling by the Maine Climate Council and others has shown the state has adequate transmission to meet demand for the next 10 years, said Dan Burgess, director of the Governor’s Energy Office.

But “to unlock additional wind or additional resources, it’s almost certainly going to include new transmission, he said.” A recent statement by five New England governors, including Maine Gov. Janet Mills, listed the lack of a “proactive transmission planning approach” as a key problem with the current wholesale market structure.

“Upgrades to transmission (above 100 kV) and distribution will be required in all regions to some extent, and certainly upgrades to the smaller lines under PUC jurisdiction,” David Littell, an energy and environmental attorney and former Maine PUC commissioner, wrote in an email. “The question is how much, and that turns on where and what types of systems they are connecting to now at the transmission level and lower distribution system levels.”

At some point, Littell said, the Northeast is likely to find itself in a scenario like what California faces today, in which solar threatens to overwhelm the grid on sunny afternoons when electricity demand is low, such as in the spring or fall, leading to low or even negative prices for generators.

“When that happens, I would predict 10 to 20 years down the road in the Northeast, then we’ll need to look at transmission constraints a lot more carefully to ramp up to very high levels of renewables to move north and south, east and west.”

Solving the transmission issue is going to be necessary if Maine wants to meet its ambitious renewable energy goals, according to Jeff Thaler, a professor at the University of Maine law school who’s focused much of his time on project permitting issues. And it won’t be easy.

While states can take some action on their own, they’ll ultimately have to push the regional grid operator, ISO-NE, and federal regulators to take action since transmission is a regional concern.

“The states have to push, and ultimately the public utility commissions have a role… because ultimately it’s the ratepayers that end up paying,” Thaler said. “That’s why it’s not a unilateral decision” by the regional transmission organization.

Encore Renewable Energy, a Vermont-based company, recently began working with customers in Maine. Founder and CEO Chad Farrell hopes to break ground on seven facilities next year, although several have been slowed by an interconnection study being conducted by ISO-NE.

He compared the market in Maine to that of Vermont, which saw its own net metering boom beginning around 2010 and has since slowed as enthusiasm among state leadership has waned. Vermont is currently seeing its own transmission shortage.

“I think storage really helps” address those constraints, Farrell said. ”Obviously that market is not nearly as advanced as solar or wind.”

Like other developers, Encore was encouraged by the legislation passed last year. Farrell said that was important groundwork for more development, especially in the absence of federal action.

“The politics [in Maine] are right to stay engaged and smooth out some of these early growing pains, and try to frame the importance of a durable market that doesn’t go through booms and busts,” he said.