In 2019, San Diego Gas & Electric (SDG&E) wanted to be relieved of the job of purchasing the sources of electricity (natural gas, solar, wind) to meet customers’ energy needs.  “Choice is happening and we need to evolve with it,” Kendall Helm, SDGE’s vice president of energy supply said. “And this old model … doesn’t make sense.”  The utility recognized the need for change and embraced them.  While they haven’t abandoned renewable energy as a source, new laws have changed the way they can report their renewable energy endeavors.  The California Energy Commission wanted to clarify how much renewable energy utilities deliver to California customers.  “The purpose of the regulation was greater transparency and to level the playing field so everybody is using the same math,” said Lindsay Buckley, a spokeswoman for the Energy Commission.  In the past, renewable energy credits were used to offset any deficiencies in reaching zero-carbon goals.  However, figures must now be reported separately. Now SDG&E reports the actual amount of energy San Diegans consume from renewables and renewable energy credits(RECs) no longer count toward climate targets.  RECs are reported in a different category, as a percentage of energy sales.  With SDG&E relinquishing their purchase power, the responsibility of clean energy will fall on new government-backed power agencies or community choice aggregators. A new community choice energy program (CCA) encompassing Carlsbad, Del Mar and Solana Beach will begin enrolling customers this week.  The CCA offers an alternative to San Diego Gas & Electric when it comes to purchasing sources of energy.  “We are very excited that after years of work, (the Clean Energy Alliance) will be bringing cleaner energy and choice to Carlsbad and Del Mar and continuing the same cleaner energy mix for Solana Beach,” Kristi Becker, the chair of the alliance and Solana Beach’s deputy mayor, said in an email. Earlier this year, another CCA called San Diego Community Power launched in five cities.  Customers can continue to support renewable energy with a CCA but they won’t see savings right away.  Exit fees must be paid to SDG&E to cover the costs the utility has spent, over the years, on building power plants and developing renewable energy projects.  So far, 779 customers in the three cities have opted to stay with SDG&E.  The utility continues to reinvent itself with major projects modernizing and upgrading infrastructure.

Their neighbors in Arizona haven't always had a clear idea about how renewables would be incorporated into their energy mix but they do now.  Tucson Electric Power(TEP) is launching its biggest solar and wind plants to date.  Built and owned by NextEra Energy, 100MW Wilmot Energy Center will be their biggest solar generating resource and will include 30MW of battery storage.  The 250MW Oso Grande Wind Project in New Mexico will also go online soon to provide power to TEP customers.  “These systems more than double our large-scale renewable energy resources and represent a big step toward the cleaner, greener grid we’re building for our community,” said Susan Gray, TEP’s President and CEO. “We’re taking decisive action on behalf of our community to protect our climate.”

When the old model isn't working anymore, it's time for an upgrade.  What 'decisive action' has your utility taken to trade in an old business model for a new one?  How are you navigating the needs of the customer, climate goals and policy changes?

Do you mean, Why isn’t the old model working?  Great topic for discussion. What are your thoughts?

Nevelyn, that there was some problem with the "old model" - one of generating electricity at centralized plants and distributed by well-regulated electricity monopolies - is a construction of free-market capitalists who didn't like to be regulated, who believed it was their right to take captive electricity customers for every dime they could.

The de-regulated "new model" grants those capitalists everything they could possibly desire. It grants them the right to skimp on reliability, to push "green" solutions that aren't green at all.

Here's a test - ask your CCA how much they're paying for the electricity they're buying for you. Or ask them, "How can my electricity be '100% solar electricity' when I use electricity at night?". They won't tell you - not because they don't know, but because California law specifically stipulates that that information may be withheld from consumers.

The more you learn about electricity in California, the more you'll realize the new model is a step backwards - one that re-introduces problems of misrepresentation and customer exploitation solved nearly a century ago.

Not for or against CCAs but curious how they will impact utilities and their current business model. I did notice that there wasn't much change for customers in the way of rates but majority seemed ok with supporting renewable energy sources.

Hard to know, Nevelyn. On the homepage of the "Clean Energy Alliance" there are more questions than answers. 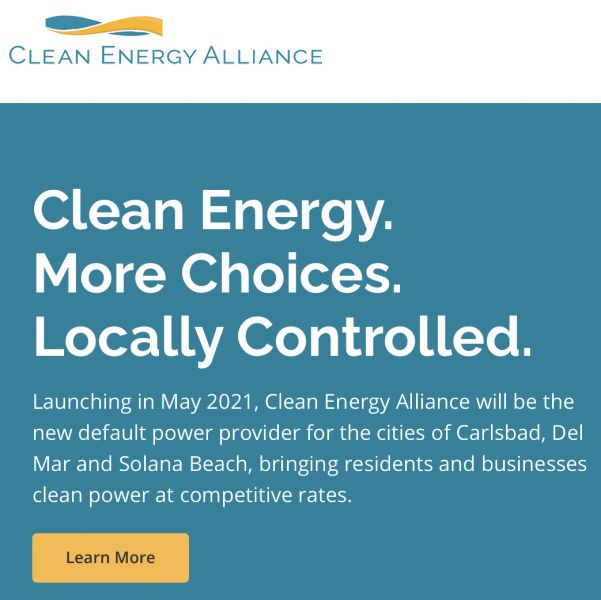 If you're an electricity customer in those beach cities you've been switched to CEA by default - most will never know they're no longer buying electricity from a state-regulated provider. So what recourse do you have when your rates go up and you suspect you're not getting what you paid for? CEA claims:

Local officials have no idea how electricity is bought or sold, much less how rates are set, and their oversight is limited to what CEA tells them - they aren't able to audit its books, or examine the power purchase agreements (PPAs) CEA claims are bringing you 100% solar electricity.

But let's assume CEA is indeed buying the PPAs it claims it is. How does that work: you're using power at night, but it supposedly comes from the sun? If you ask them, you'll get a predictably confused answer. Your local elected officials won't know. Likely, the employees at CEA don't even know.

Here's how it works:

CEA buys a commitment from SDG&E to buy an amount of solar electricity equal to the amount of dirty fossil power you're consuming at night. Somehow, you're supposed to believe when they buy solar electricity for someone else during the day it "cancels" the dirty electricity you used at night, that the emissions produced by the gas plant to make your electricity magically disappear from the air. Because the clean electricity they buy is always used to "offset" dirty electricity in this way, CEA's plans are half as effective as they say they are. Your pricey 100% solar plan is actually a 50% solar plan; their 50% plan, a 25% plan, etc.

And every one of them is dirtier than the SDG&E electricity customers bought in 2010, before San Onofre Nuclear Generating Station was closed.

I spend a lot of time explaining this to people because I care about the environment. When we use solar and wind to justify shutting down nuclear plants we're going backwards on climate change - and there is no more time for lies.