What can be done to reduce influence of dark money on Ohio energy policy? 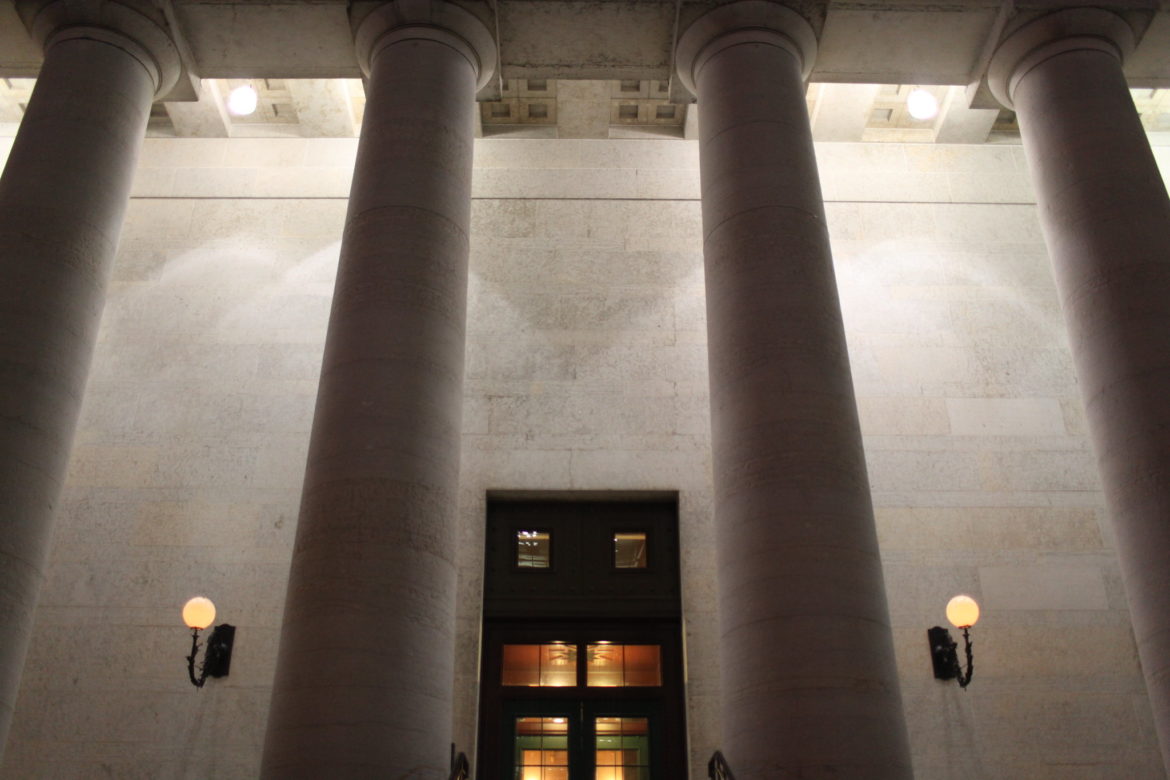 Any changes in the wake of the alleged $60 million Householder conspiracy will ultimately depend on voters, advocates say.

The arrest of former Ohio House Speaker Larry Householder and others in July revealed how the use of dark money organizations enabled an alleged $60 million conspiracy to sway elections and provide costly bailouts to noncompetitive nuclear and coal plants.

As federal and state court cases move forward, questions remain about what can be done to restore confidence in the legislature and to prevent similar situations in the future.

“Dark money is really how special interests win right now,” said Jay Costa, executive director at Voters’ Right To Know. When corporations use shell groups to hide their political spending, they “gain a level of credibility they wouldn’t otherwise have,” he explained. “I like to think of it as the ‘Wizard of Oz’ effect.”

In other words, voters don’t get to see who’s behind the curtain.

Two months after the federal government’s criminal complaint and indictment in July, Ohio Attorney General David Yost has filed a state court lawsuit. The complaint alleges a “pattern of corrupt activity,” and seeks injunctive relief to prevent FirstEnergy, FirstEnergy Solutions, Energy Harbor and others from reaping benefits from the bailouts under House Bill 6. A hearing on a preliminary motion for that relief is currently scheduled for Friday, Oct. 2.

Meanwhile, it’s unclear whether Ohio lawmakers will actually repeal House Bill 6, the bailout law passed as a result of the alleged conspiracy. Both Democratic and Republican lawmakers called for a swift repeal in late July and early August. However, leadership in the Ohio House has so far refused to allow a full House vote on any pending repeal bills.

“They’re just dragging their feet,” said Rep. David Leland, D-Columbus. “We have 58 members of the legislature who are willing to repeal HB 6 right now.”

Instead, Speaker Robert Cupp, R-Lima, has referred the bill to a House Select Committee on Energy Policy and Oversight. So far, those hearings have largely been a general review of the pros and cons of HB 6, rather than a focused oversight of the alleged corruption that led to its passage and whether it should be repealed in order to repair any claimed harm to public trust in the legislature’s integrity.

“The only way that we can prove that Ohio is not for sale is by repealing HB 6,” Leland said. “The polling we’ve seen shows that people by an overwhelming margin are going to punish those people who have voted for HB 6 and have done nothing to repeal it.” Early and absentee voting in Ohio begins on Oct. 6.

“Our legislators are supposed to act in the public interest,” said political scientist Leah Stokes at the University of California at Santa Barbara. Corporations’ interests may sometimes conflict. But, she adds, “it’s really politicians’ and regulators’ job not to be listening to those special interests. That basic responsibility of democracy has failed in Ohio with House Bill 6.”

A straight repeal would mostly restore Ohio energy law to before HB 6 became effective, subject to some follow-up regulatory matters before the Public Utilities Commission of Ohio. A quick replacement could potentially reenact all or much of the law, which also gutted the state’s clean energy standards.

Advocates say that rushing to ram through anything more than a simple repeal this year would either just repeat bad policy or create more problems, even aside the alleged conspiracy’s past influence on the current makeup of the Ohio House of Representatives. Even at that, a repeal bill would now need either an emergency clause or an injunction sought by the state attorney general in order to stop the nuclear subsidies slated to start in January. The committee adjourned on Sept. 30 and no additional meetings are currently scheduled.

HB 6 “is so questionable at this moment. The vehicle itself and the way it was sold is all just a pack of lies,” said Rachael Belz, executive director of Ohio Citizen Action. “We need them to repeal it, and then we need to go from there.” And that second step will take time, she said.

“It’s complicated and complex legislation and policy. And we have to get it right,” said Chris Neme, a principal and co-founder of Energy Futures Group. “Passing a bill in less than a couple of months like the way HB 6 was just leads us down the road of unintended consequences.”

Shining a light on dark money

The bigger question is how to prevent similar abuses in the future. Utilities and fossil fuel interests have given heavily to Ohio political campaigns since the state enacted a 1999 law calling for competition in electricity generation. And the level of giving went up dramatically once a competitive market actually began to develop in the state.

Utilities’ political spending has continued during this election season. FirstEnergy spokesperson Jennifer Young said that its political action committee has since canceled campaign donations it had originally reported as going out in July shortly before Householder’s arrest.

Campaign donations shown for August have in fact been sent out, Young said. FirstEnergy has denied any wrongdoing in connection with its political donations or the alleged Householder scandal.

Meanwhile, a 2010 Supreme Court case, Citizens United, “really opened up the floodgates of fossil fuel and electric utility influence over politics,” Stokes said. Utilities’ political spending is “particularly pernicious,” in her view, because customers “have to buy from these companies” to get electricity delivered to their homes.

At the same time, reporting requirements currently apply only to immediate spenders on political issues and campaigns. They don’t reach all the way up the chain to the original source of the money.

In the case of HB 6, money flowed into Generation Now from multiple sources, with a lion’s share allegedly originating with Company A — understood to be FirstEnergy — and its subsidiaries, according to the federal complaint.

Some of the money in turn then went to a political action committee. Or, it went to other organizations that directly funded pro-HB 6 ads. One such ad claimed a debunked Chinese conspiracy was behind last year’s failed effort to put a referendum on the law on the ballot this fall. A for-profit group called Ohioans for Energy Security paid for that ad. When asked last year, lawyers at the firm that set up the corporation, Isaac Wiles, would not answer questions about the source of its funding.

“The notion that dark money is something some people don’t like is not part of the elements of the crime,” Mark Weaver, an attorney at that firm, said at a Columbus Metropolitan Club forum after news broke about the Householder arrest. He noted that the alleged $60 million in bribes and dark money donations “pales in comparison” to the amount that Americans spend on Halloween candy and costumes every year. And he claimed that the First Amendment guarantees a right to conduct political spending anonymously.

However, the 1995 case that Weaver cited distinguished earlier cases requiring disclosure for corporate spending. And the Supreme Court’s opinion in Citizens United stated that “prompt disclosure of expenditures can provide shareholders and citizens with the information needed to hold corporations and elected officials accountable for their positions and supporters.”

“There is no absolute right to anonymous speech,” said attorney Ian Vandewalker at the Brennan Center for Justice at New York University School of Law. Elections are treated differently from general speech, because of the overriding interest in making sure elections function properly, he explained at a panel organized by the League of Women Voters of Ohio.

“That requires informed voters. And it requires policies to not be able to cheat the public,” Vandewalker said. “And so those interests require that there be a level of transparency.”

“No regulation, no law, no set of ethical rules substitutes for American voters paying attention to who’s running for office — pressing them hard on what they stand for, looking closely at the issues, and going into the ballot box having done your homework,” Weaver said.

“The reason that information is important and transparency is important is so that voters are educated,” said Catherine Turcer, executive director of Common Cause Ohio. “You can’t make the argument that voters need to be better educated but you shouldn’t give them actual education. It doesn’t make any sense.”

Moreover, disclosure needs to be timely, said Heather Taylor-Miesle, executive director for the Ohio Environmental Council. In the case of HB 6, Generation Now didn’t report its 2017 spending to the Internal Revenue Service until late 2019. By then, millions more had been spent to influence the 2018 elections, the passage of HB 6, and the failed referendum effort against it.

Several bills introduced by Democratic and Republican lawmakers could make a strong start toward improved disclosure, including HB 737, HB 739, and SB 347. Those bills should be broadened to include digital media, as well as more traditional campaign spending, Turcer said.

The bills should also call for disclosure not only of the name of an organization, but the identity of the top three original donors of funding, Turcer added in her Sept. 16 testimony in support of SB 347. “Otherwise, wealthy special interests will attempt to avoid disclosure by creating pop-up shell groups,” she said.

And while Ohio voters won’t know who’s behind all the groups funding attack ads or other political spending this election season, information is available about how lawmakers voted on HB 6. The Akron Beacon Journal has also compiled some information on how some funds were used in the 2018 Ohio House campaigns.

“People should contact their legislators about HB 6” if they want to speak out about the issue, Stokes said, noting that the law passed with support from a mix of both Republicans and Democrats.

“When the public is outraged about an issue and really shows up, these issues get reversed,” Stokes added. “There’s a lot of leverage right now.”