Power Engineer who transitioned into Data Science using his own curiosity about the data.

COVID-19 pandemic has had a significant impact on consumption of electric energy. The quarantine measures were different from country to country but they had the same underlying principles, the major two were: sanitation protocols and social distancing - the last one was also the most important for electricity sector because it meant shut down of major industries and staying at home until the pandemic peak passes.

From electricity consumption standpoint this meant that energy consumed in commercial & industry sector has decreased (some major manufacturing facilities had to shut down completely) and consumption in households has increased which is logical, because people who had to leave their workstations were now staying at home or working remotely during the day.

From figures 1 and 2 below you can see the comparison of weekly load profiles in Slovenian DSO network for C&I and households for March 2020. The all general shutdown of major companies in C&I came into effect on Monday 16th March. From there forward new companies have shut down their operations everyday and more and more people started working from home. We do however see, that the household consumption has a bit of reaction delay since the daily profiles have increased only after the weekend 21.-22. March, from there forward the daily profiles have a shape of Saturdays or Sundays even during the week. This effect was continued into April.

Of course the size of changed energy consumption depends on the severity of countermeasures that each country has taken and when did these countermeasures came into effect. For example Spain had to shutdown their entire non-essential C&I sector for a lot longer than South Korea who barely had to shut down at all.

In Slovenia we have actively tracked daily energy consumption in DSO network during the coronavirus outbreak and we wanted to visualize this in a simple but yet effective manner, for everyone to understand the effects in a simple single graph. We have decided to plot the daily peaks of electricity consumption onto a calendar heatmap, that has weekdays on x-axis, weeks in month on y-axis and the value of energy consumption on z-axis (color). 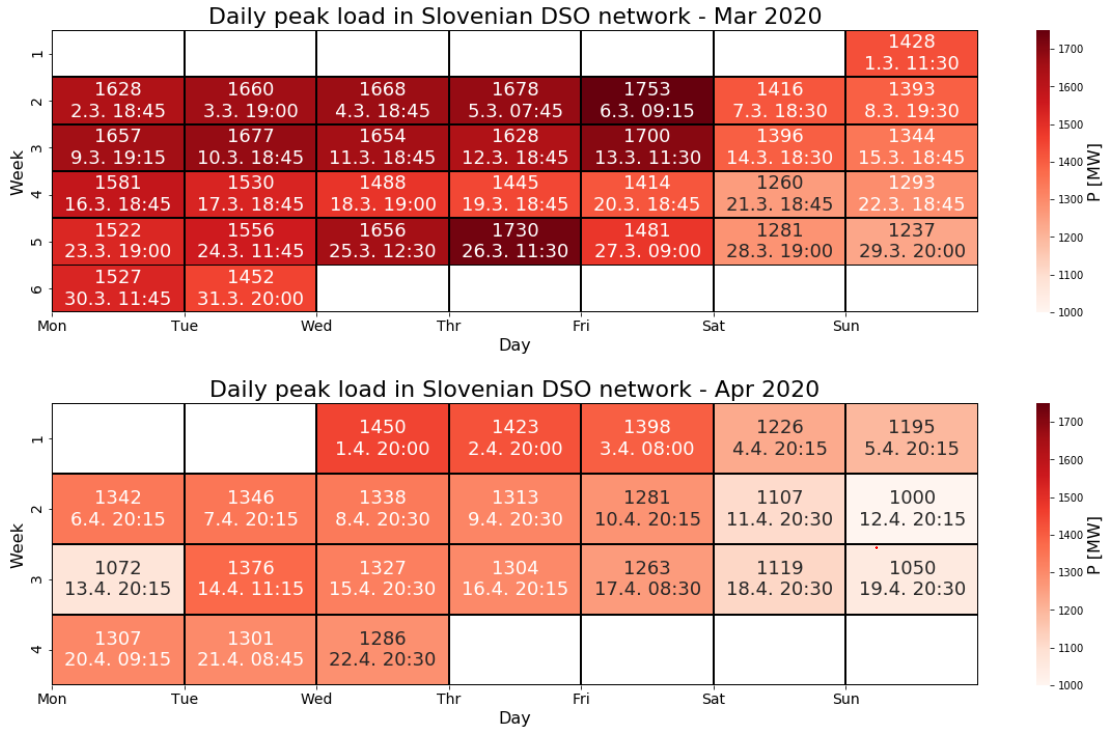 The values written inside the heatmap boxes are daily peaks in MW and below we have written the timestamps of when the daily peaks have occured. The color of the box can quickly tell when some event has occurred on a certain date:

Now of course this heatmap could also be plotted for daily consumed energy which would be even more representative. The reason we have decided to plot daily peaks is because we wanted to see if the coronavirus has the effect not just on consumed energy, but on maximum loads also. This is important for short term network planning. As a network is less stressed on peak times some activities can be rescheduled, but of course to get a deeper picture on this we would have to look at the peak loads in a more hierarchical way deeper in the grid. But that's a story for another post.

The plots in this post were produced in Python using matplotlib and seaborn libraries.