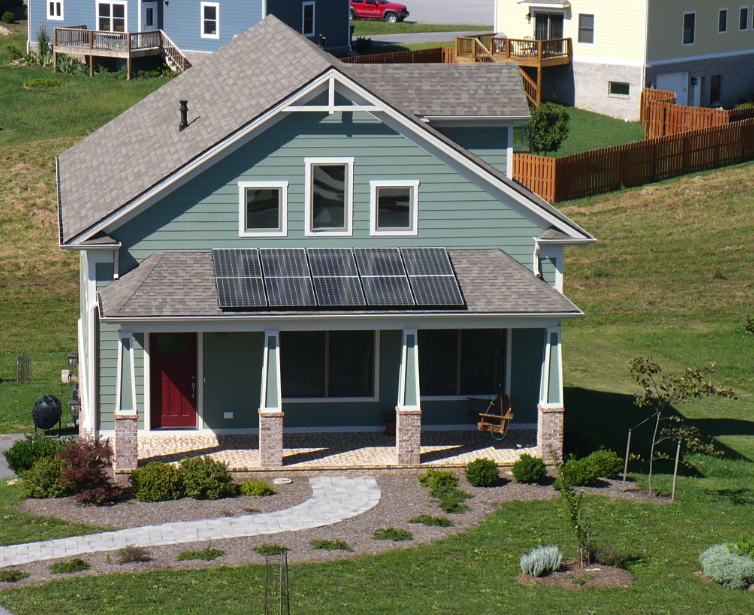 Solar on a home in Blacksburg, Virginia. Photo by: Solar United Neighbors of Virginia

Aaron Sutch had a hunch that homeowner associations across Virginia were blocking a significant number of rooftop solar panel installations. And when a spreadsheet of data confirmed his suspicions, the renewable energy advocate rallied friends and foes to reverse the trend.

How did Sutch’s inclusive approach turn out?

It morphed into solar-friendlier legislation that Democratic Gov. Ralph Northam signed into law Wednesday. That’s not too shabby for somebody making his first stab at crafting legislation as the program director at Solar United Neighbors of Virginia.

In addition to coalescing environmental organizations, solar supporters and industry, Sutch bridged a yawning gap with representatives from community associations.

“This was about building relationships,” he said. “I didn’t want it to be antagonistic. We wanted to address this together.”

The new law — which combines Senate Bill 504 and House Bill 414 — says association rules cannot require a homeowner to alter a rooftop solar configuration that would increase its cost by 5% or decrease its kilowatt-hour production by 10%.

Those specifics update and clarify a 2013 measure that allowed homeowner associations to impose “reasonable restrictions” on the size and placement of residential rooftop solar installation.

“This gives a quantitative threshold to a term that was nebulous and so many shades of gray,” Sutch said. “The overarching message is that we want good installs and a degree of accountability.

“Nobody wants a crappy installation that looks like a bunch of tires up on the roof.”

Pia Trigiani, an attorney who specializes in community associations, worked with Sutch’s allies to define the parameters for reasonable restrictions.

“We settled on this and it’s a compromise,” said Trigiani, an attorney at MercerTrigiani in Alexandria. “The legislation is a good example of our efforts to cooperate and understand we live in a changing world where alternative energy like solar is becoming more common.”

Surveys show that people living in communities with covenants like having restrictions because they allow associations to take on bad actors, Trigiani said, adding that most residents don’t want those rules to be over the top.

Associations have rules to defend the rights of all homeowners, she said, not to pick on the ones who are challenged on their solar installation plans.

“I’m not a restrictive covenant zealot,” Trigiani said. “I see the benefits and I understand the complexities. What we argue for is protection of contractual obligations.”

Lawyer Matthew Gooch, a former assistant attorney general who offered guidance to Sutch’s coalition, said challenging a solar blockage is expensive because homeowners have to pay legal fees. Then, a judge or jury decides the fate of their case.

“This takes all of that away and lays down a quantitative marker for what is unreasonable,” said Gooch, of ReisingerGooch in Richmond.

“It’s a quantum leap forward for people in homeowner associations who want to install solar. It’s a good thing for public policy in Virginia to have this legal clarity.”

Sutch heard grumblings from solar developers about their battles with homeowner associations when he began working for Solar United Neighbors in 2014.

Developers often vented on the nonprofit’s email exchange about how associations across the state blocked panel installations or dictated that panels had to go on the back of a house so they weren’t visible from the street. That bumped up the size — and price — of a project because northern exposure isn’t optimal for capturing sunlight.

A spreadsheet Sutch compiled covering more than five years of data revealed that associations had blocked 300 solar installations, which amounted to a $7 million loss for industry.

“And that’s a conservative estimate,” Sutch said about the information he gathered via an informal poll. “For every homeowner who is blocked, there are two or three neighbors who won’t even try for solar because they just assume their homeowner association won’t allow it.

“Association restrictions block more solar on homes than any other policy in Virginia.”

Those who want to write blockages off as a vexation only in wealthier northern Virginia are wrong, he said, because blockages affected neighborhoods, as well as golf course and lakeside communities, from the Washington, D.C., suburbs to Blacksburg in the Blue Ridge Mountains.

Sutch’s data showed that Richmond-based Sigora Solar — a nationwide company and the largest solar outfit in Virginia — topped all developers, losing $3 million in potential income with roughly 120 blocked projects since 2014.

And those numbers don’t include the restrictions that Sigora helped homeowners overcome, said Tad Luttrell, the company’s vice president of sales and marketing.

“It’s mostly fear of the unknown,” Luttrell said about some associations’ reluctance to embrace solar because they are only familiar with panels of the past. “Today, they’re way different. They’re sleek and black and blend in pretty well with roofs.”

While many associations are cooperative, he said, others move at such a snail’s pace on approving panels that homeowners give up. And that’s a shame, he added, because the average customer saves $86,000 in utility payments over an installation’s lifespan.

“I don’t blame them for wanting to protect their communities,” he said. “But it doesn’t work well to hold back progress.”

He echoed the comments of Rachel Smucker of the regional solar trade group that the new law will create consistency across the board if the associations operate within the spirit of the legislation.

“This matters a lot to industry because it will provide stability,” said Smucker, Virginia policy and development manager at the Solar Energy Industries Association covering Maryland, Delaware, Virginia and the District of Columbia.

Sutch figured he had done his homework by gathering input from a  cross-section of parties to craft a first iteration of the House and Senate bills. Partners at the table included the Sierra Club, the Distributed Solar Alliance and the Virginia Conservation Network.

So, it was a wake-up call when Del. Mark Keam, a Fairfax County Democrat who usually backs clean energy bills, said he couldn’t support an initial iteration  because it lacked a third-party review process.

That prompted Sutch’s coalition to fold in a requirement that an independent solar panel design specialist verify that any restriction cited by an association is not reasonable because it would raise the project’s cost too much or lower its productivity.

The collaborators differ on who exactly should fill that role. Details need to be ironed out before the law kicks in on July 1.

“The intent there is to give some degree of independence,” Sutch said. “We’ll see how it plays out in the real world.”

Luttrell said involving a neutral reviewer might make sense for some solar companies, but Sigora isn’t among them.

He explained that sophisticated company software is designed so customers can see how any changes in panel orientation will change the price and energy-producing capabilities.

Nonetheless, adding that review provision helped the bills gain resounding bipartisan support in both legislative chambers. As well, it generated some goodwill between entities that could have remained at odds.

Trigiani said she was open to collaborating with Sutch because he was seeking a solution — not a fight.

“At the end of the day, his goal is met by putting in place some objective standards for measuring whether the guidelines a board adopts are reasonable,” she said. “How do you argue against that? I don’t know.”