We are the Environmental division of POWER Engineers. Together with our clients, we solve complex environmental and regulatory challenges while balancing business and environmental objectives.

Posted to POWER Engineers—Environmental in the Utility Management Group Wildlife biologist with extensive field experience with a variety of biological resources throughout the western U.S., with primary expertise in birds and plants. Experience with NEPA, ESA, MBTA...

The bald eagle (Haliaeetus leucocephalus) and golden eagle (Aquila chrysaetos) are nationally protected species under the Bald and Golden Eagle Protection Act of 1940 (BGEPA). The BGEPA (16 U.S.C. 668-668d) prohibits the take of any bald or golden eagle, including incidental take—a foreseeable take that results from, but is not the purpose of, an activity.

On September 30, 2022, the U.S. Fish and Wildlife Service (USFWS) published a proposed rule in the Federal Register to revise the regulations authorizing the issuance of permits for the incidental take of both species of eagle and their nests.

Under the existing rules, eagle take is permitted through issuance of a specific permit with project-specific conditions. To increase the efficiency and effectiveness of permitting, USFWS proposes to create general permits, in which the proponent would self-certify compliance with the permit conditions without review by USFWS.

Because the bald eagle population is larger than previously estimated and still growing, and much larger than the golden eagle population, general permit eligibility and requirements will differ for the two species. General permits for bald eagle take will be available for more activities and will not require compensatory mitigation. General permits for golden eagle take, on the other hand, are only available for wind energy facilities and power line utilities and will require compensatory mitigation.

USFWS proposes two geographic requirements for wind energy general permit eligibility. The facility must be in an area with low relative eagle abundance and must be greater than 660 feet from a bald eagle nest and greater than two miles from a golden eagle nest. Eagle abundance would be based on data from eBird, and updated periodically. USFWS would offer a publicly available online mapping resource to determine eligibility. 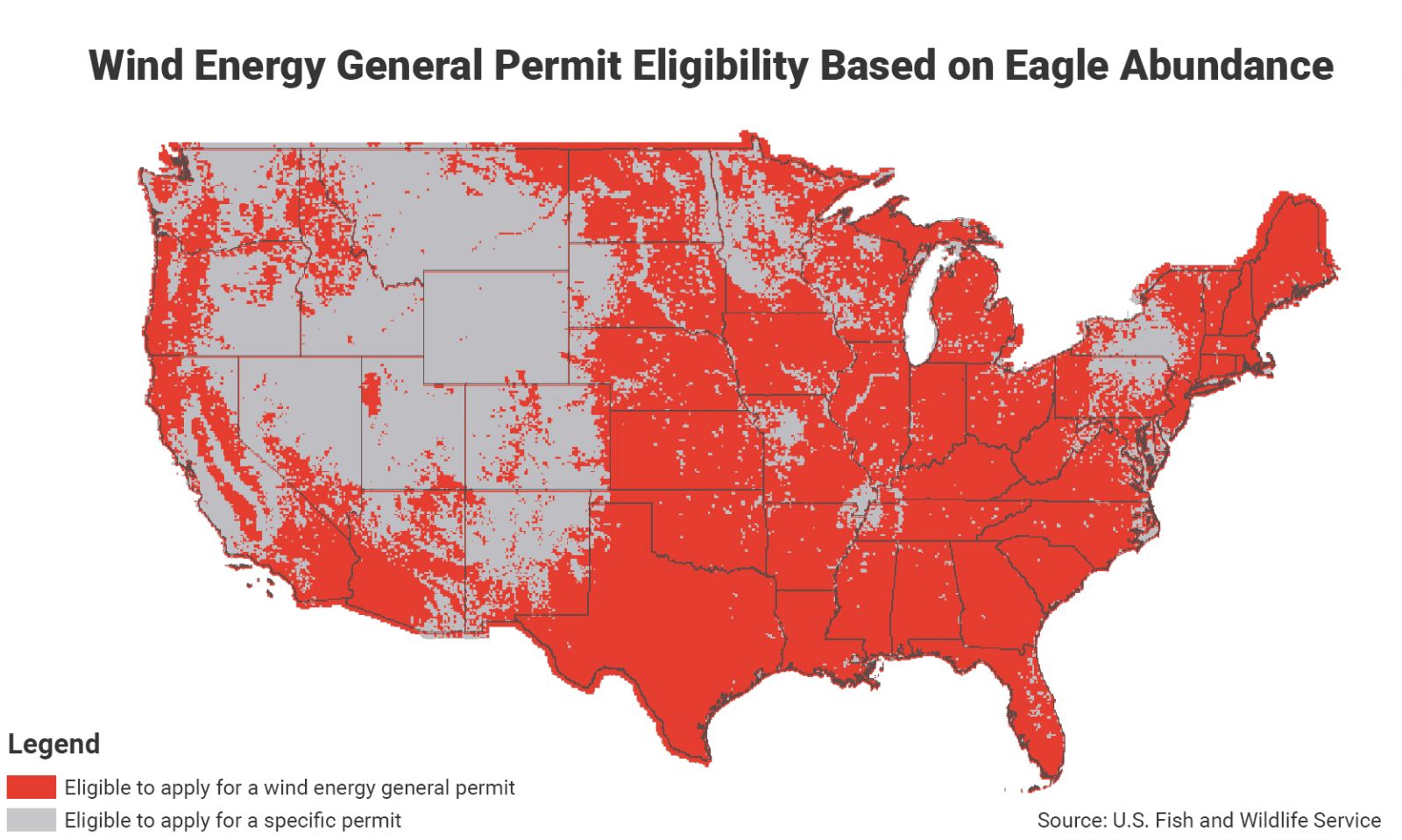 Currently, a specific permit requires up to three years of third-party standardized fatality monitoring. A general permit will not require the standardized third-party monitoring, but instead will only require that proponents train relevant employees to recognize and report eagle fatalities as part of their regular duties, report discoveries of dead or injured eagles within two weeks of discovery and provide annual reports. Each facility would also pay an administration fee of $2,625 per turbine to fund program-wide fatality monitoring by USFWS and consent to allow systematic monitoring at project sites by USFWS staff.

A general permit authorizing take of golden and bald eagles for power line entities would have a five-year tenure, an application cost of $500 and an administration cost of $5,000 for each authorized state. USFWS estimates an average cost of $1.1 million dollars over a five-year period for power pole retrofits.

The qualification of power line entities for general permits would require six conditions:

Additionally, proponents would be required to train relevant employees to recognize and report eagle fatalities as part of their regular duties, report discoveries of dead or injured eagles within two weeks of discovery, and provide annual reports.

General permits could apply to a number of different activities including:

Permit conditions would include implementation of standard avoidance and minimization measures. Monitoring would be standardized and required, as necessary, to evaluate whether disturbance occurs (e.g., a single report of whether the nest does or does not fledge young). Disturbance of nesting golden eagles would continue to require a specific permit. Non-lethal hazing activities and activities adjacent to a communal roost or foraging area do not require a permit. However, proponents of activities that fully prevent use of a foraging area should apply for a permit, especially if the activity will remove all foraging opportunities within one mile of an in-use nest.

USFWS proposes to issue general permits for the direct take of bald eagle nests for emergency, health and safety and human-engineered structures. These permits would use the same tenure and cost structure as disturbance take permits. General permits would also allow removal of subsequent nesting attempts during the same permit tenure and on the same nest substrate, up to a half-mile from the initial nest. Take of golden eagle nests would continue to require a specific permit.

Check out this handy comparison chart of fees, monitoring and management, and eligibility and reporting requirements between specific permits and the proposed general permits.

Article originally published on the POWER Engineers' website. Subscribe to our newsletter today to stay current on environmental insights and regulatory updates that impact your projects.

Looks like the two-tier US justice system is once again at work. Shoot an eagle and you are in deep trouble with the law. Chop them up in a wind turbine, and the government is fine with that.

The motto of green energy: We have to destroy the environment (including eagles, whales, bats) in order to save the planet.

Comment on proposed regulations and no response from the bureaucrats occurs. Really clever way to simply ignore the public; allows the bureaucrats to do whatever they please with virtual impunity.