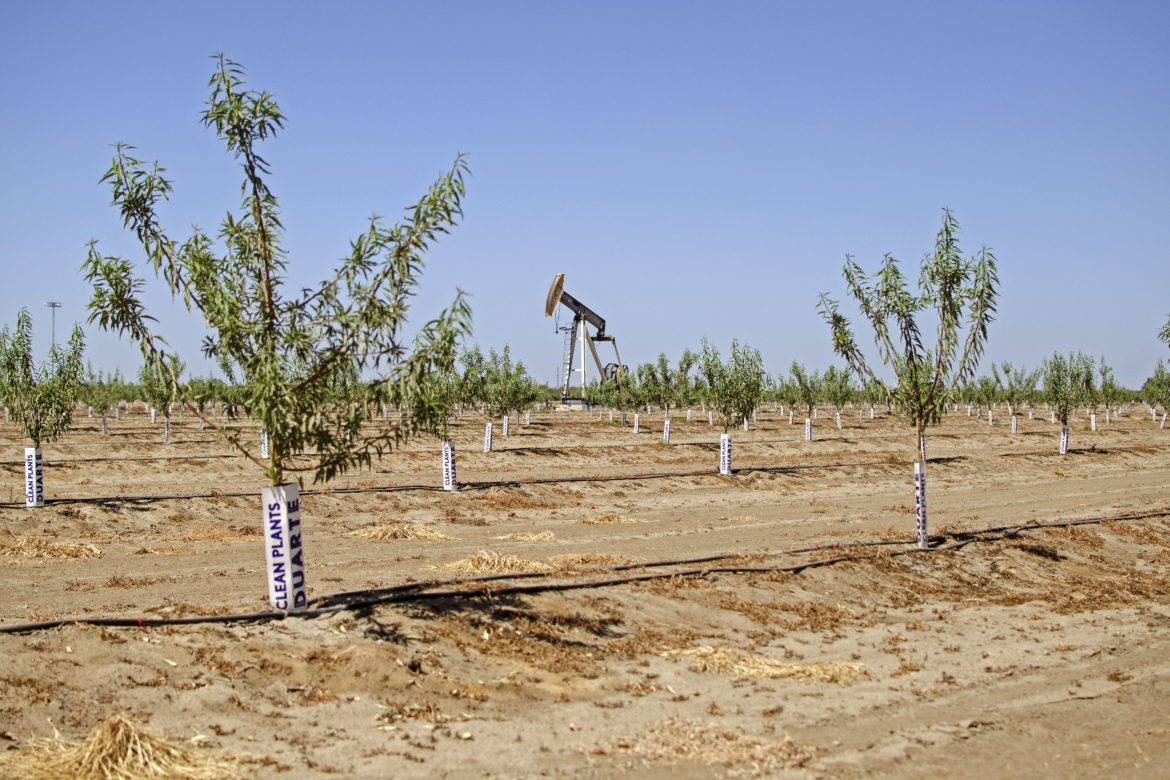 A pumpjack rusts among nut trees near Arvin, California, after its owner went bankrupt and orphaned it. Photo Cedit: Mark Olalde / for the Energy News Network

Democrats leading the push say their plan has no real downside, while critics say it gives the industry a pass.

When the U.S. was fighting to emerge from the Great Depression in the 1930s, President Franklin D. Roosevelt launched ambitious public works projects to put people back on the job. Now, with the country in the midst of another crushing economic slowdown, can cleaning up oil and gas wells fill in as a similar stimulus?

That’s the question on Capitol Hill, as negotiations are underway to appropriate tax dollars to plug orphan oil and gas wells. Democrats leading the push say the plan has no real downside, as it would create temporary employment in the oilfields while cleaning up wells that emit greenhouse gases, leak air and water pollution, and pose an explosion hazard.

“It’s a win for the environment, it’s a win for states, it’s a win for workers,” chair of the Subcommittee on Energy and Mineral Resources Rep. Alan Lowenthal, D-Calif., said during a June 1 forum on the proposal. “And it simply accelerates the cleanup that American taxpayers are on the hook for sooner or later anyway.”

Moderates on both sides of the aisle and a coalition of green groups are hailing the political momentum to address orphan wells as a much-needed win for jobs and environmental cleanup. But other environmentalists panned the negotiations as sidelining reform in favor of addressing symptoms of a larger issue.

On Monday, the House unveiled a more than 2,000-page bill called the Moving Forward Act that proposed an infrastructure-focused stimulus package and included the first public salvo in the funding negotiations.

The bill would give the Department of the Interior and the Department of Agriculture 90 days to create a federal well-plugging program, which would receive $2 billion over five years. The bill also included language that, if passed, would close some loopholes in the currently inadequate system meant to guarantee money is available for well cleanup. 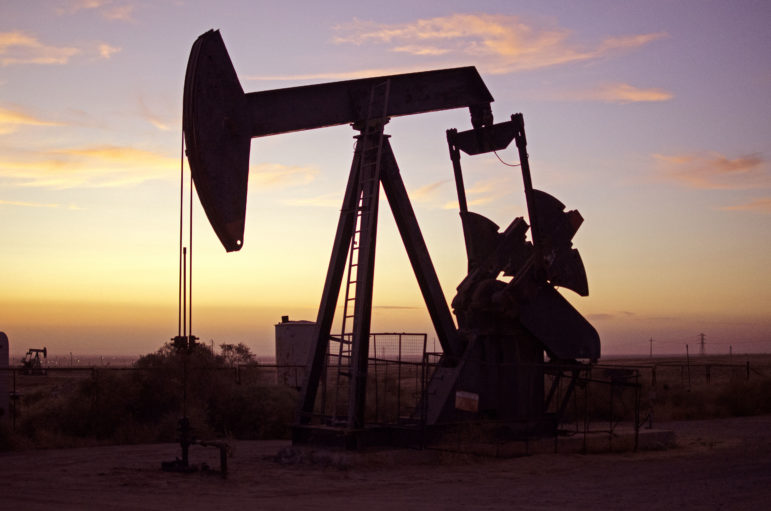 The sun sets behind an oilfield in California’s Central Valley. (photo by Mark Olalde / for the Energy News Network)

The coronavirus pandemic and resulting economic slowdown have touched all sectors of the American economy, including oil and gas.

Conservative jurisdictions — Wyoming, for example — have done what they can to further subsidize the industry. On the other end of the spectrum, the most progressive plan that’s been proposed calls for forming an entirely new federal agency to take over well cleanup.

According to interviews with Congressional staff, lobbyists and advocacy groups, the negotiations leading up to the Moving Forward Act agreed on doling out the money as grants. These would be used to pay private sector companies to plug and abandon — the industry term for decommissioning — a list of about 57,000 orphan oil and gas wells that have no identifiable owner.

Here’s how the math works out. Democrats and some green groups are using highly conservative estimates of the number of orphan wells and the plugging costs to back their proposals with bullet-proof evidence that Republicans won’t refute. To do so, they’re mainly citing data from the Interstate Oil and Gas Compact Commission, an organization that represents regulators in oil- and gas-producing states.

According to the IOGCC, there are 56,600 orphan oil and gas wells around the country, and the average per-well cleanup cost is $24,018. Cleaning these up lands in the $2 billion range once several hundred orphan wells on federal and tribal land and several hundred million dollars for data collection and mapping are taken into account.

These numbers vastly low-ball the true scale of the problem. The groups behind the current proposal, however, argue they’re asking for the most they can get. What remains uncertain is just how far off their projections are. 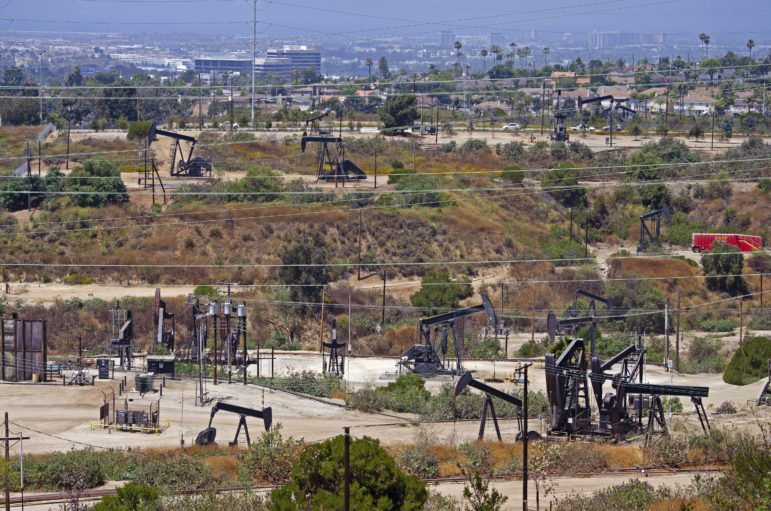 Oil and gas wells pump the aging Inglewood Oil Field in the middle of Los Angeles County. (photo by Mark Olalde / for the Energy News Network)

The U.S. Environmental Protection Agency has estimated that there are several million orphan wells around the country. The IOGCC numbers also have obvious flaws. For example, they list 16 orphan wells in California, while state regulators admit that number is likely about 2,500.

As for cost, Energy News Network previously reported that Ohio has been paying more than $110,000 per orphan well it plugs. While the cost isn’t always that high, data from other states — including California and North Dakota — show that it’s not unusual for a single well cleanup to break six figures.

Such shortfalls in funding stem in part from inadequate bonds, which are the security deposits companies must put down before drilling that the government can use for cleanup if a well is orphaned. On federal land, these bonds haven’t been updated in 60 years, according to the U.S. Government Accountability Office, so Lowenthal and others have pushed to tie reform to stimulus money.

“Orphaned wells are an issue during boom cycles as well,” Lowenthal told the Energy News Network in a statement. “It is just more stark during the busts. That is why any conversation around funding to reclaim orphaned wells and create jobs must be done with bonding reform as a key part of the conversation.”

Environmental groups have generally supported the plan if it focuses on orphan wells and comes with the possibility of bonding reform. “We strongly urge you to take steps to ensure this orphaned well problem does not reoccur due to insufficient bonding standards,” Sara Kendall, program director with the Western Organization of Resource Councils, which advocates for landowners and the environment, said during the June 1 forum.

And a report published Thursday by CarbonTracker found the industry is facing hundreds of billions of dollars of cleanup costs, most of which it will be unable to fund.

But staff at the House Natural Resources Committee told the Energy News Network that if the votes aren’t there on the proposed stimulus package, they might have to drop the environmental reform efforts to get it passed. Staff said there would likely then be a push for a second bill in the future to address various oil and gas loopholes.

While reform is up for debate, the plan for federal funding has relatively wide political appeal. The New Mexico delegation in the U.S. House of Representatives has also championed it, as the state is reliant on its oil and gas industry and unemployment there more than doubled due to the pandemic.

“The public health crisis has tested our communities in countless ways, and workers in the oil and gas industry are no exception,” said Rep. Ben Ray Lujan, D-N.M. “More must be done to assist workers across our state.”

Lynn Helms, director of the North Dakota Department of Mineral Resources, joined the June 1 discussion on behalf of the Interstate Oil and Gas Compact Commission to explain that state regulators have relationships with the oil and gas companies that would do the cleanup work, have the legal authority to plug wells and know where wells are. “We have everything we need except for budget,” he said.

“States that rely on taxes and fees from production for their plugging funds are very hard hit,” Helms added, “and funding this important work will provide an immediate and meaningful stimulus to those states and their citizens.” 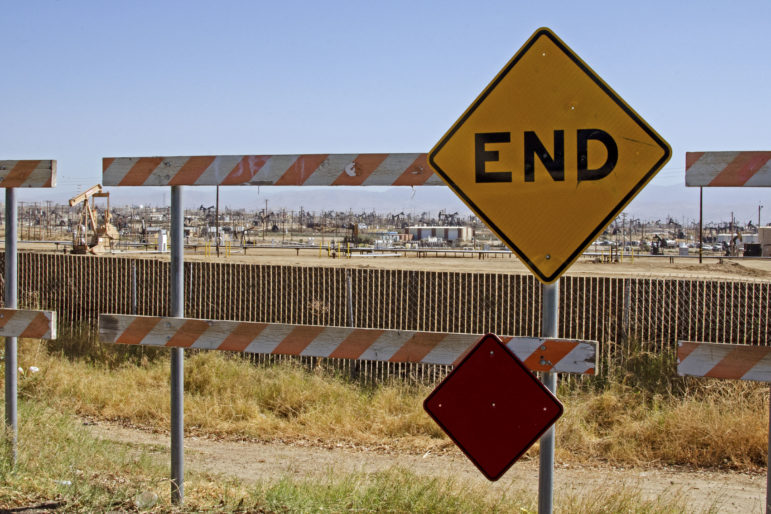 A forest of oil and gas wells punch through the Earth across the street from the community of Oildale, California, in Kern County, which is home to about three-quarters of the state’s wells. (photo by Mark Olalde / for the Energy News Network)

The industry, meanwhile, has not taken a firm stance on the potential funding. A spokesperson for the American Petroleum Institute, the country’s main oil and gas trade group, did not specify whether the organization supported or opposed the plan.

Matt Hammond, president of the Ohio Oil and Gas Association, said his organization also had not taken a position. But, he said in an email, potential funding should be channeled through state governments, and “those looking to create a program should review Ohio’s model” that uses a severance tax on current operators to fund the plugging of orphan wells.

A federal program would come with precedent. Canada recently unveiled a very similar push, which included CA$1.7 billion for orphan well cleanup, nearly all that money as a grant that wouldn’t need to be paid back.

Regan Boychuk is a Canadian environmentalist and expert on well decommissioning costs with the Alberta Liabilities Disclosure Project, a coalition of landowners, former regulators and other stakeholders. He said that it’s “wonderful to put people back to work, wonderful to get this stuff cleaned up. But if the wrong people are paying for it, we’re moving in the wrong direction.”

In America, some green groups agree with Boychuk and oppose the centrist approach of paying for — some say subsidizing — the oil and gas industry’s cleanup with potentially minimal strings attached.

Greenpeace, for example, ran its own calculations and proposed appropriating $20 billion for cleanup on the condition that there’s federal bonding reform, the introduction of a “Superfund-style tax” on operators and an end to oil and gas subsidies.

The elephant in the room on bonding reform, though, is that Congress is moving slowly and running out of time to get more money out of the industry if it doesn’t stay in Monday’s bill. Marginal companies are already going bankrupt due to the pandemic, and asking them to accurately bond their wells could push more into insolvency.

“You won’t have more bonding. You’d have more companies fail. You need to be careful where you collect the money from,” Boychuk said. “When you push companies over the edge, you will be blamed for it.”

Instead of maintaining the status quo, some activists have floated the idea of reinventing the cleanup system, although big green groups and politicians have so far written them off.

Among them is Megan Milliken Biven, who previously worked for the Bureau of Ocean Energy Management and wrote a draft bill that would create an entirely new agency called the Abandoned Well Administration. It would directly hire oil workers to clean up after the industry without having to pay the industry a premium to do so.

“The last social license the oil and gas industry has is ‘jobs,’ and they don’t even have that right now,” she said. “Their power is diminished right now, and we can claim that power from them.”