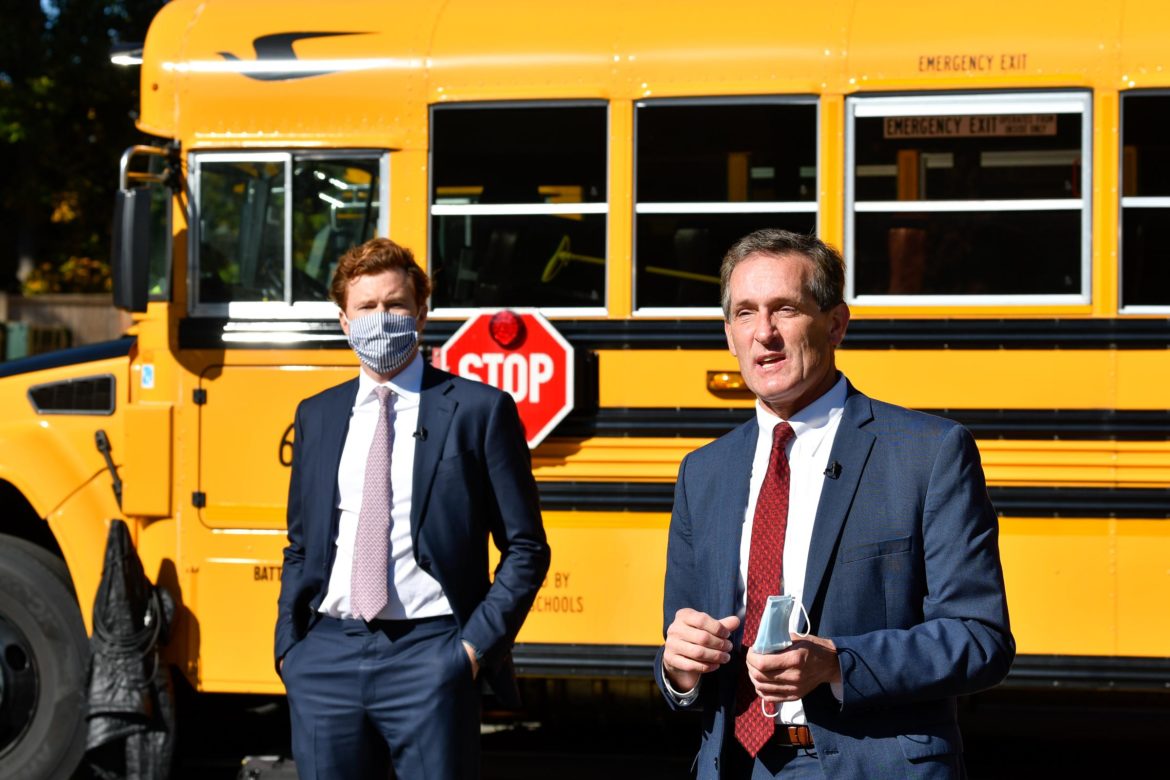 Highland Electric Transportation has partnered with a Massachusetts city to provide electric school buses without the upfront costs or maintenance hassles.

A Massachusetts company that aims to transform the electric school bus market has rolled out its first vehicle as part of the city of Beverly’s plan to convert its entire fleet to electric power.

“We’re excited that it’s finally in our hands,” said Beverly mayor Michael Cahill. “We have a good feeling about it.”

Beverly’s new bus is just the fourth electric school bus to be put into service in Massachusetts; the other three were part of a state-funded pilot program in 2016 and 2017.

Some 9,000 school buses are on the road across Massachusetts. Many cities and towns have started looking for ways to cut emissions from their school bus fleets, both to lower greenhouse gas emissions and to reduce the exhaust fumes students are exposed to on a daily basis. In Beverly, more than 45% of the city’s emissions come from transportation, so the city’s fleet of 22 school buses is a logical place to look for carbon reductions, Cahill said.

The rollout of Beverly’s new bus is a collaboration between the city and Highland Electric Transportation, a local start-up founded in 2018 by renewable energy industry veteran Duncan McIntyre. In his previous work, McIntyre helped develop solar power purchase agreements, a model in which a company builds, owns, and operates a solar installation on a customer’s property and the property owner agrees to buy the energy generated.

As electric vehicle technology evolved, McIntyre spotted an opportunity to apply the same concept to the school bus industry.

Though prices vary, electric school buses can cost more than $300,000, roughly three times the cost of a comparable diesel vehicle. Charging infrastructure can add another 15% to 30% to the final price tag. Highland, therefore, plans to partner with school districts that are interested in using electric school buses but unable to afford these high upfront costs. The company will buy and own the buses and charging infrastructure. Customer school districts will pay a monthly fee for the use of the buses and chargers, as well as ongoing maintenance.

“We’re making a heavy bet on the front end of this and investing in a long-term project,” said Marc Riccio, Highland’s vice president of sales.

For a school district to buy an electric bus on its own, the district would have to pay for the vehicle and charging infrastructure upfront, counting on savings from lower fuel and maintenance costs to make up for the initial cost over the course of several years. Few, if any, school districts have the budget for this sort of expenditure.

However, as a private company, Highland can take advantage of buses’ depreciation in a way municipal entities can not, allowing it to spread out the financial impact of the investment and pass that lower monthly cost on to its partners. Essentially, Riccio said, Highland lets school districts acquire an electric school bus as an ongoing operational cost rather than a lump-sum capital cost.

Highland is also pursuing grant money to help fund individual projects. The Beverly bus was paid for, in part, by $288,000 from Massachusetts’ portion of Volkswagen’s settlement for violating the Clean Air Act. Beverly and Highland also expect to put a second bus on the road using $176,000 from the state Accelerating Clean Transportation Now grant program.

Furthermore, Highland expects to defray costs with revenue from vehicle-to-grid arrangements with utility companies. The buses’ batteries can be discharged into the grid as needed to lower peak demand, which, in turn, could help prevent more expensive and dirtier power plants from needing to come online. National Grid has agreed to pay Highland for this service in Beverly, and the company expects to strike similar deals in other places as the business develops.

“These units will play a very critical role to help accommodate the increased appetite for power, in the literal sense,” Riccio said.

The result is that Highland should be able to provide an electric school bus at little to no increase in cost over a district’s current monthly expenses, Riccio said.

This first bus will be something of a test case for Beverly, allowing the city to assess the vehicle’s performance and cost-effectiveness so they can start strategizing how to transition the entire fleet in coming years.

“We’re really interested to track its performance,” Cahill said. “We want to move as quickly as we can, but the technology has to bear up.”

Analysis of the state-funded pilot program found the buses performed as desired in some ways, but also discovered some unexpected concerns. The buses — deployed in Cambridge, Amherst, and Concord — did create lower emissions and particulate matter than a diesel vehicle.

But the fueling costs were higher than diesel would have been because of poorly managed charging, explained Jennifer Wallace-Brodeur, director of clean transportation at the Vermont Energy Investment Corp., the organization that conducted the analysis. Buses were left plugged in after their batteries were full, unnecessarily drawing power from the grid, or were charged during times of high demand, when electricity prices were higher.

These findings, she said, highlights the need for districts to pay careful attention to when, how, and how long buses are being charged for.

“If buses had been using managed charging strategies, then you would’ve seen significant savings,” she said.

The report on the pilot project also noted the buses needed extensive maintenance, which took them off the roads almost half of the time. However, the available vehicle options have expanded since that time and the technology has improved, Wallace-Brodeur noted. Furthermore, bus companies now provide more responsive service, for quicker turnaround on maintenance and repairs, Riccio said.

For electric school buses to truly become widespread, state and federal policies are going to have to offer more financial support, Wallace-Brodeur said. With current prices for electric buses, even innovative models like Highland’s need grant money to be successful on a large scale, she noted. If it comes to fruition, the Transportation and Climate Initiative’s cap-and-invest program for transportation emissions could provide a valuable source of funding, she said.

In the meantime, Highland is doing outreach in a dozen states, working on deals for future electric bus roll-outs. And Beverly’s leaders are glad to be part of testing out a new way to advance a clean energy future.

“It seems that in the transportation sector the answer is electrification,” Cahill said. “We’re excited to be moving that forward.”