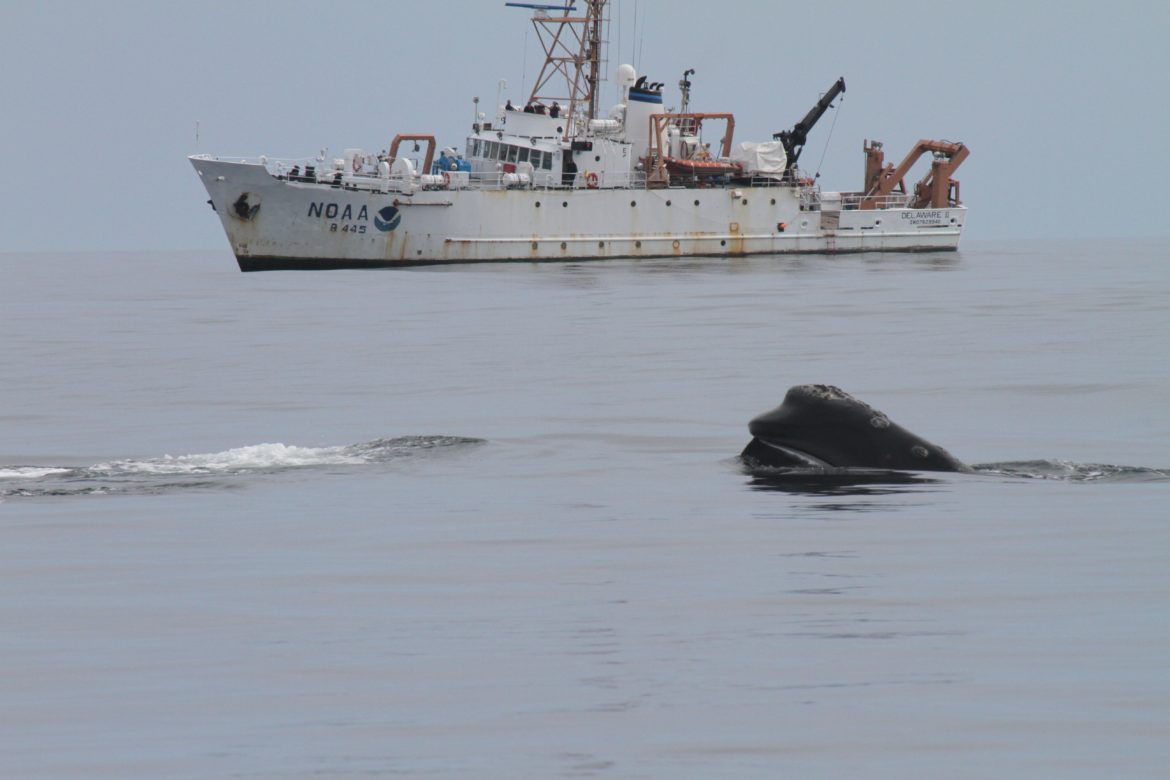 A North Atlantic right whale is seen off the coast of Massachusetts, with NOAA ship Delaware II in the background. Only about 400 individuals of the endangered species remain; six were recorded dead last month.

Any potential disruptions would be small compared to other hazards, including the threat of climate change, experts said.

“There are so many other things that we cumulatively are doing that are having a much more profound and direct impact on the population,” said Chris Clark, a scientist in the bioacoustics research program at the Cornell Lab of Ornithology in Ithaca, New York.

The Vineyard Wind project is a planned 84-turbine wind farm to be sited about 15 miles southwest of Nantucket. It is expected to be the first major offshore wind installation in the United States. The state of Massachusetts has chosen the project to provide up to 800 megawatts of power.

The project needs more than 25 local, state, and federal permits to begin construction. Among these is an Incidental Harassment Authorization from the National Oceanic and Atmospheric Administration’s Fisheries division, which would establish limits on the numbers of marine mammals that could be injured or whose activities could be disturbed by the construction.

“We are dealing with a really small population size,” said Diane Borggaard, right whale recovery coordinator for the National Marine Fisheries Service. “They have a very low annual birth rate. Any cause of human mortality is really going to affect this population.”

In recent years, more right whales have been known to intermittently congregate in the waters south of Nantucket and Martha’s Vineyard.

Because of these ongoing concerns, Vineyard Wind struck a deal in January with three environmental groups — the Natural Resources Defense Council, the Conservation Law Foundation, and the National Wildlife Federation — in which the developer promises to adhere to mitigation measures. According to the agreement, no pile driving will occur from January to April, and careful visual and acoustic monitoring will be required before any pile driving activities for the rest of the year. Vessels associated with construction will also be required to keep to speeds slower than 10 knots, with certain exceptions.

“We’re seeing this as a precedent-setting move,” said Francine Kershaw, a project scientist for marine mammal protection at the Natural Resources Defense Council.

Nonetheless, in May, a Nantucket group called ACK Residents Against Turbines (“ACK” is a nickname for the island derived from the official code for the local airport) filed a letter with the fisheries division asking that the harassment authorization not be granted. The letter argues that the agency has a “poorly-disguised policy preference for the Vineyard Wind project” over the protection of whales. The draft authorization, the group contends, does not address the impact noise from the project will have when it is in operation, does not fully consider the problem of potential collisions with boats, and places too much faith in Vineyard Wind’s stated plans for mitigating its impact.

Ultimately, the letter concludes, the North Atlantic right whale in particular “will continue to be threatened and pushed ever-closer to extinction, all for the sake of a wind energy project that will only encourage more growth and consumption and will, in the end, do nothing to reverse climate change.”

Scientists with right whale expertise, however, say that the scale of these concerns is not warranted, based on current evidence.

Charles Mayo, director of the right whale ecology program at the Center for Coastal Studies in Provincetown, Massachusetts, generally opposes industrial use of the ocean floor and is wary of potentially interfering with marine habitat. Yet he is reassured by the mitigation agreement.

“You want to err on the side of caution. I think we should be particularly cautious about what we do and particularly in right whale areas,” he said. “But the agreement seems about as rational and conservative as you could come up with.”

Furthermore, the noise issues raised by the island group are essentially insignificant, said Clark, the bioacoustics expert. At any given moment, noise from shipping vessels and seismic exploration of the seafloor creates massive amounts of ongoing underwater noise, which can interfere with whales’ communication and increase their stress, he said. In contrast, the sound produced by pile-driving into a sandy surface in relatively shallow water would be only of a short duration and very localized.

“It’s so profoundly different that it is incomparable,” he said. “Given all the mitigation and monitoring requirements that are going to be imposed in the licensing, there is almost no chance that these activities will harm whales.”

There are many unknowns about how the movements of whale populations are changing and how new disturbances to their habitats might affect the species, said several scientists. No mitigation plan can be foolproof. However, the dangers of climate change are so pressing for all species, that taking careful steps to move toward renewable energy is the right environmental move, Mayo said.

“I recognize the overriding importance of bringing carbon emissions under control,” he said. “To me, that is the solution.”