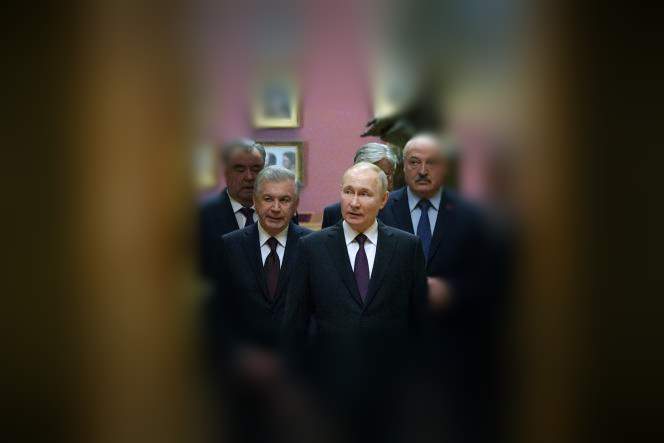 On the eve of celebrations to welcome in the new year, Russia on Thursday launched a hail of missiles over Ukraine. The sound of explosions could be heard reverberating from just after dawn in towns and cities across the country. The attack, involving 69 cruise missiles and kamikaze drones, according to the government in Kiev, is one of the largest of the Kremlin's war in Ukraine, and has been aimed primarily at Ukraine's energy infrastructure. Since the temperatures began to drop, Russia has been heavily targeting power plants. It was the tenth attack on vital infrastructure since September.

Russian President Vladimir Putin is seeking to plunge the country into darkness and cold to break the resistance of a population already enduring a war that has entered its eleventh month. Ukraine's anti-aircraft defences have intercepted 54 of the 69 missiles the Kremlin has fired in abundance. However, Thursday's attacks have left more than 90% of the city of Lviv without power, according to the mayor's office, which also warned of severe water shortages. In Kiev, 40% of homes have been left in darkness, according to its mayor, Vitali Klitschko.

One of the Ukrainian anti-aircraft missiles fell in Belarus without reported casualties, according to BelTA, the Belarusian state news agency. The Belarusian defence ministry is investigating whether it was shot down by its air defence systems or whether it was a missile that missed its target and fell on its territory bordering Ukraine.

As the first rays of sunlight began to dawn in the Kiev sky, the drone of missiles and a grey trail swept across the sky. The anti-aircraft alarms had warned earlier that the capital, like the whole country, was under missile attack alert. Moscow fired 16 missiles at the Ukrainian capital on Thursday. All were intercepted by anti-aircraft defences, according to the Ukrainian authorities. However, remnants of the shells hit two houses, a children's playground and a factory, injuring three people, including a 14-year-old girl, according to the mayor's office.

The attacks also damaged infrastructure in the port city of Odessa, in Zitomir and in Kharkov in the north-east of the country. Several buildings, a power line and a gas pipeline were damaged in shelling outside the south-central city of Zaporiyia, according to the governor, Oleksandr Starukh. In Kherson, recaptured by Ukraine in November after months of Russian occupation, a missile hit a medical centre, according to local authorities. Two people were injured. "They dream that Ukrainians will celebrate the New Year in the dark and cold. But they cannot defeat the Ukrainian people," the Ukrainian defence ministry said on social media.

Russia has launched the large-scale attack on Ukraine from at least two ships and 13 strategic bombers, from which it fired cruise missiles, according to the Ukrainian air force leadership. Shortly before the missile barrage, Moscow dispatched swarms of kamizake drones, mostly Iranian-made aircraft, with which Kremlin troops seek to distract anti-aircraft defences before unloading the missile barrage. On Thursday, the buzzing of a swarm of at least 13 Iranian Shahed-136 drones flooded the skies over the city of Kharkov; 11 of them were shot down, officials said. In Dnipro, in the centre of the country, a strategic city, communications hub and important logistics centre, anti-aircraft defences shot down five drones, followed by a barrage of missiles. Ukraine's southern command has warned that three Russian missile-carrying ships are in combat position in the Black Sea.

Ukrainian President Volodymir Zelensky had warned a few days ago that Russia was preparing another large-scale bombardment during the festive season. "With the arrival of the Christmas season, Russian terrorists may become active again," he said a few days ago. "They despise Christian values and any values in general," he added.

Thursday's massive bombardment comes just days after a drone struck a strategic Russian air base from which Moscow has begun bombing Ukraine's vital infrastructure, in an attack that killed at least three Kremlin soldiers and exposed new cracks in Russia's anti-aircraft defences and the design of the invasion. The attack was the second drone strike against the same Engels base in the Saratov region. As in previous raids, the Ukrainian government maintains cryptic language about the drone attack: they do not claim direct responsibility for it but have pointed to it as a consequence of the Kremlin's war.

It's sad, but unsurprising, to see how much energy has played into this conflict

That's right, Putin has not had enough with the warlike supply of natural gas to Europe, he needs more cruelty to try to achieve his utopian and insane crusade.

Christopher commented on ...
New electric grid test bed can help industry, government secure electric generation
So, a test dummy for large-scale grid innovations: this is genius though a little surprising we didn't already have something like this.