Paul has spent a long career in and around the energy business, working in the industry and as a consultant. In his time with Centrica (1997-2019), he held senior positions in strategy...

The recent COP26 conference in Glasgow highlighted, once again, the global nature of the climate challenge and the urgency of climate action required to avert further significant global warming with all its devastating consequences.

This article aims to set out briefly, the important but often neglected role which Community Energy organisations can play in helping to deliver effective action on climate. It is written from a UK perspective and illustrated by our own South London experience in SE24 (https://se24.co.uk/), in the hope that it will also be of interest to a wider energy sector audience in North America and elsewhere.

The UK’s 2019 adoption of a legally binding Net Zero target for 2050 represents a major increase in the climate ambition. This shift to Net Zero from the UK’s previous 80% abatement target (vis-à-vis 1990 emissions levels) is hugely significant, since it leaves no option but to tackle emissions in those sectors of the economy which are ‘hardest to abate’.

To date, a very large part of the UK’s total CO2 abatement has arisen in the power generation sector, with the reduction in higher carbon fossil fuel generation (especially coal) and the growth of renewables. Whilst recognising the scale of that achievement, the decarbonisation of other sectors – such as heating and transport - will be still more challenging.

The interim UK milestones en route to Net Zero 2050 are also key. Late in 2020, the Government set an enhanced 2030 emissions target of 68% abatement (vs. a 1990 base). The Climate Change Committee (CCC) then proposed a 6th UK carbon budget (for the period 2033-37) which has now been accepted by Government. It implies a 78% UK emissions reduction over the period 1990-2035. The scale of the decarbonisation challenge is set out in the following chart from the CCC’s main Sixth Carbon Budget report[1]: 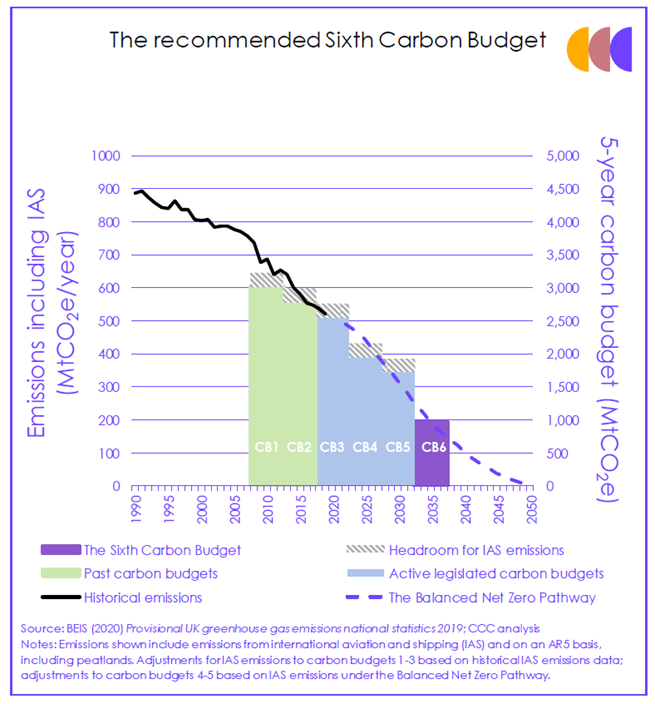 The contribution of Community Energy

The CCC, which is a widely-respected independent advisory body, made this important observation regarding the delivery of Net Zero carbon abatement targets:

“It will not be possible to get close to meeting a Net Zero target without engaging with people or by pursuing an approach that focuses only on supply-side changes.” and “there is currently no Government strategy to engage the public in the transition to a low-carbon and climate resilient economy. This will need to change.” not least because “Over 60% of the abatement in our Net Zero scenarios to 2050 involves at least some degree of change from consumers”.

Community Energy organisations like our own SE24 are one of the main ways in which people from local communities can become engaged in the transition to Net Zero.

Organisations like ours may need some introduction, especially for a non-UK audience. Most are constituted as Community Benefit Societies, which are not-for-profit companies but distinct from charities.  They typically raise funds at a low rate of interest from community investors (members), whilst their governance is based on ‘one member, one vote’ in the Annual General Meeting.  Some have paid employees and others (like SE24) are staffed entirely by volunteers. 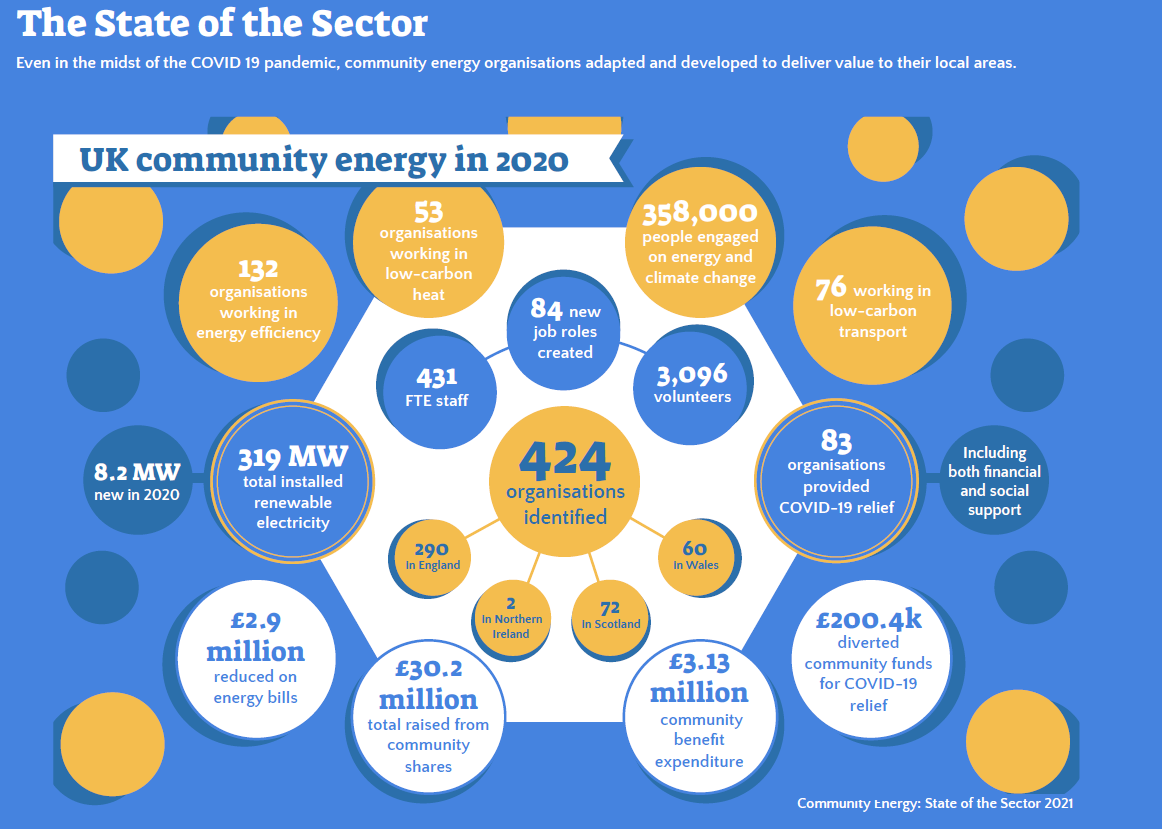 The statistics are impressive – with well over 400 organisations in the UK engaging over 350,000 individuals. Many Community Energy organisations cut their teeth on renewable energy projects, a shown by the 319 MW of installed capacity to which 8.2 MW was added during 2020. Other notable features are the energy bill savings realised by schools, churches, social housing and other site owners, the resulting CO2 abatement and the use of any financial surplus to support those in fuel poverty and enhance community education/engagement.

These achievements have been delivered despite the end of subsidies for new onshore renewable projects, including the previous Feed-in-Tariff scheme for rooftop solar. The scope for viable new community solar projects has nevertheless narrowed, especially in the major cities where access to land for ground-mounted solar farms is very limited. Community Energy organisations like ours are having to focus on larger rooftop schemes with high levels of on-site consumption. The loss of solar subsidies has also driven a wider diversification of Community Energy projects – into areas like LED lighting, heat pumps, electric vehicle charging and energy storage, as well as larger scale onshore renewables in out-of-town locations.

Zooming in on SE24

Community Energy organisations vary quite widely across the UK – in terms of size, location and project mix – but they also have some common characteristics. Without claiming that SE24 is ‘typical’, it may be helpful to illustrate the general state of the sector with a specific example which we know well.

Formed in 2015, SE24 was named after a happy coincidence between Sustainable Energy and our local equivalent of a US Zip Code. It has seven Board Directors who bring a good mix of skills and experience to bear, all of whom are unpaid volunteers. Our location sits on the boundary between the inner London Boroughs of Lambeth and Southwark. As of early 2022, we have now delivered seven Community rooftop solar projects, with a total capacity of around 340 kW, and two LED lighting installations in local schools. In 2021 alone, we raised around £240,000 from our community investors, who now number more than 80.

At SE24 we like to track the impact of our projects against various metrics – including CO2 emissions avoided, the financial electricity bill savings realised by our partners and the number of local families helped via our Community Fund.  Following the completion of our three 2021 projects (one solar, two LED), our combined impact has taken a large step forward as shown in the chart below. 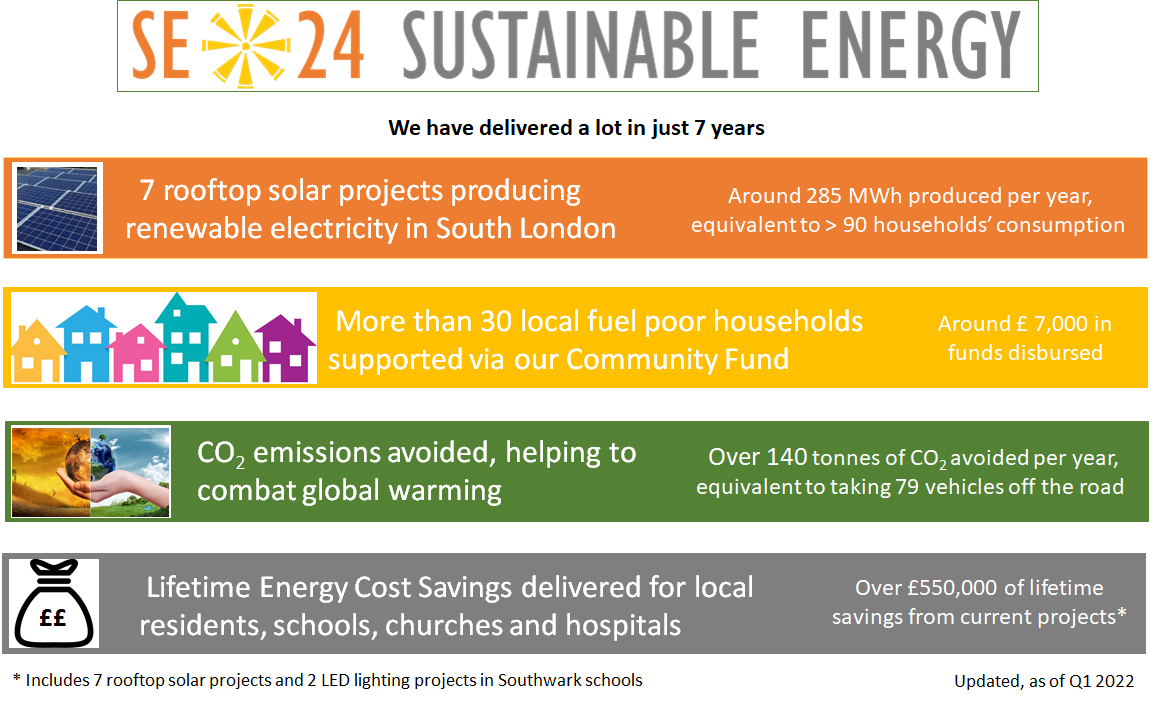 We all know how much energy prices have risen this year, not just in the UK but across many parts of the globe. The good news is that those community partners who locked into solar before that price hike are saving even more money on their electricity bills!

It is also worth considering ‘what’s next’, both for the Community Energy sector as a whole and for SE24 as a specific urban example.

A continued diversification of Community Energy sector activity is more than likely. Outside the urban areas, this will include the development of larger onshore renewable projects which are now often viable without subsidy. Community Energy can also play a useful role in ‘levelling up’ the provision of Electric Vehicle charging facilities, which remains geographically uneven, as well as contributing to the Government’s ambitious target for the roll-out of heat pumps.

There is undoubtedly a case for a more sympathetic public policy stance towards Community Energy, at both a national and a local level. This point was well-made by the House of Commons Environmental Audit Committee after a short enquiry, when its Conservative Party chair wrote to the Secretary of State (Government Minister) In April 2021[3].  A backbench-sponsored Local Electricity Bill is currently under consideration by Parliament, which is designed to free up the sale of electricity from Community Energy schemes direct to local consumers.  The Committee also made the case for reinstating the Urban Community Energy Fund, or its equivalent, as well as measures to ensure that more reasonable tariffs are offered for renewable electricity ‘exports’ to the grid.

At a local level, the existence of Community Energy Funds at a local government level remains patchy – but these can be an essential catalyst for effective co-operation between Community Energy and local Councils.

SE24 exemplifies many of these national issues, in an inner-city context. We continue to see solar project opportunities on larger roofs, such as local secondary schools, whilst looking to build on our experience of diversification into energy-saving LED lighting projects. SE24 has been fortunate to benefit from a London-wide Community Energy Fund operated by the Great London Authority. Local Councils such as Southwark have ambitious Climate Emergency goals and large Social Housing portfolios, but may be short of funds and energy expertise. As at the national level, we therefore see a huge potential for us to work together with local government to help them deliver their Net Zero goals.

This seems like a compelling next stage of this trend-- do you see community energy becoming interconnected with load management and the idea of virtual power plants?

An interesting question, Matt! I suspect that few Community Energy organisations in the UK are set up to act as aggregators/optimisers of demand side flexibility at present.  Some sector-leading community initiatives such as this one in Oxford appear to be closer to that integrated energy vision than most:

Other Community Energy organisations may get there step-wise, e.g. via a combination of on-site solar and/or EV charging facilities with behind-the-meter battery storage. Once you create the demand-side flexibility, there would be a logical next step in helping our community partners to optimise it.